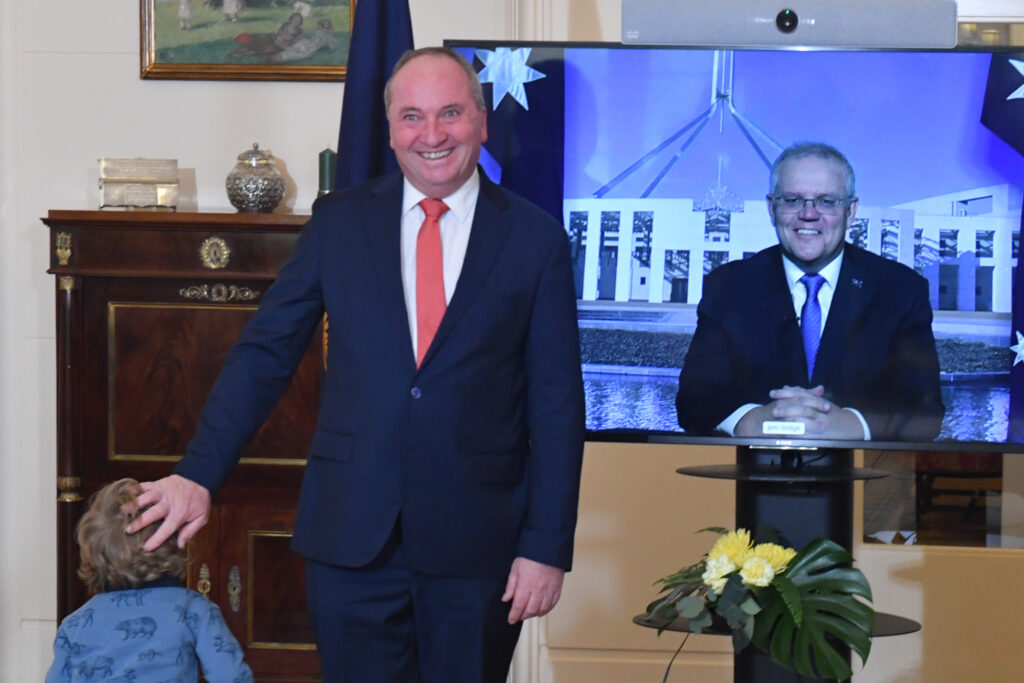 When Barnaby Joyce was reinstated as leader of the Nationals, and Australia’s Deputy PM, a lot of people in my latte-sipping social media echo chamber were a bit upset. There’s a lot of reasons to hate this sack of shit coated in what appears to be infected pig skin, but the main reason people were upset is because this is a man who had a sexual assault allegation made against him, and that seems to have been completely forgotten. My mates are mystified that a man could come back from that, and everything else he’s done, completely unscathed.

But what my fellow lefties don’t seem to realise, is that being cancelled is like being hypnotized: it only works if you believe it. If you don’t care about the outrage, you’re immune to it. If the circles in which you move care about things like sexual assault, then you can have your career ended – but if you’re mates don’t give a shit, then there’s simply no problem.

And it’s not like the Twitter left are going to actually “do” anything about it. We will write some tweets, maybe a think-piece or two – like this – and then that’s it. We’ve tried nothing and now we’re all out of ideas because somewhere in history we were tricked into thinking that the pen is mightier than the sword (hint: it isn’t, swords are way, WAY mightier).

So Barnaby has the third-from-the-top job again, behind the Prime Minister and CEO of NewsCorp, because Barnaby doesn’t care. And to a greater extent, the National Party doesn’t care. They simply don’t care about his views, his sexual assault allegation, his affair with his staff member, his dual citizenship crisis, none of it. And the reason they don’t care is because the National Party is comprised of scum.

They are all shitty, hateful, and corrupt scumbags belonging to a sociopathic party whose main policies are “fuck you”, “get fucked”, and “fuck you dog what are you looking at?” They are actively trying to make Australia worse, and they should be seen for what they are: an absolute disgrace to this country.

Now, for a big disclaimer so I don’t get cancelled (because I do believe in the mystical power of cancellation thus I am vulnerable to it): I’m not talking about Nationals voters. When I say that the Nationals are scum, I mean the party. I don’t mean people from the bush, I don’t mean farmers, and I don’t mean anyone who has been deceived and tricked into voting for these trolls. I am referring to the literal members of the party itself. I’m not going to paint an entire section of the Australian public with one brush and write them off as my enemy: that’s what the National Party does.

Michael “do you have any just plain coffee??” McCormack until a few days ago was the Deputy Prime Minister of this country. In his time as Deputy PM, I’ve lost count of how many times this prick has insulted, derided, and every other synonym for “was a dick to…” people that live in cities. I was trying to find a specific quote he said just the other week where he mockingly referenced “latte sipping inner city types” but by typing that phrase into Google with his name I’ve gotten a lot of results.

Among the many things he has mocked us for, he is mad at us for drinking coffee, he calls us raving lunatics, and has suggested we deserve to have our homes infested with mice. Imagine if an elected official from the Greens or Labor or any other left of centre party openly said some shit like “those hicks in the bush don’t know what they’re on about.” They’d be crucified, and rightly so.

I’ve seen lefties pull a lot of shit but never anything like that. But McCormack, in his capacity as Deputy PM, has openly and publicly declared himself the enemy of anyone in metropolitan Australia. And as one of the millions of Aussies who live in a city allow me to retort: I will fucken smash you.

Is that a little too violent for your tastes? Does that make you a bit uncomfortable? Well, relax, I’m just having a little joke. Much like when Nationals MP, George “The Member For Manila” Christensen made his little joke about greenies… 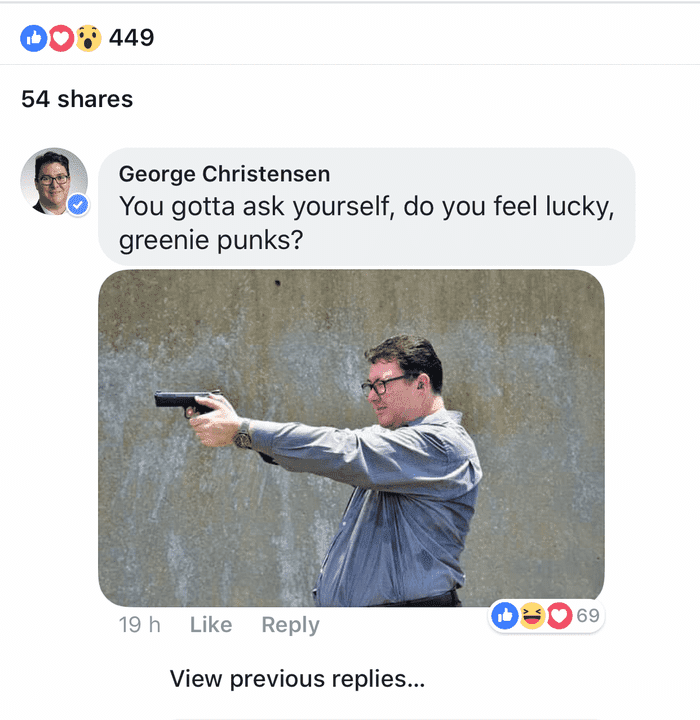 Christensen, a greasy stain of a human who was probed by the AFP for his frequent trips to the sex capitol of the Philippines, made an open threat of violence against greenies. There is no way in hell that if Adam Bandt published a photo of himself holding a gun going “I’m coming for you farmers” he would still have a career. This should have been the end of Captain Pervert but the Nationals didn’t give a shit. They don’t care because they stand by it. They can play it off as a joke but the fact remains: they hate us. They despise us. They want us dead.

It’s a story as old as the Nationals. I don’t have enough space to unpack the myriad things Joh Bjelke-Petersen did during his time as Queensland Premier, except to say that he was a power-mad, corrupt tyrant and proto-fascist. For the unaware, just look him up. I would make the case that he was one of the worst human beings to ever draw breath in this country. He violently oppressed protests, used the police to silence his opponents, and without hyperbole, was effectively the head of an organized crime syndicate. And what party did he come from? The Country Party, which at the time was the name of the Queensland branch of the Nationals.

But of course that was in the past. The Nationals have long since moved beyond those dark times when corrupt elected officials abused their power to get police to silence their political opposition… oh wait! Just 10 days Friendly Jordies’ producer was rounded up by the fucking anti-terror squad. (Disclaimer: YES I KNOW WE ALL HATE FRIENDLY JORDIES BUT THE ANTI-TERROR SQUAD ARRESTED A YOUTUBER’S PRODUCER FOR BEING MEAN TO A NATIONALS POLITICIAN, DON’T @ ME.)

The Nationals have threatened us, arrested us, mocked us, and sold our country out from under us for decades. Barnaby himself mocked people who died in the bushfires saying they were probably Greens voters, and when Adam Bandt quite rightly called out the Nationals for not caring about their own constituents, and allowing their lives and homes to be destroyed by the climate crisis, McCormack accused him of treason.

The Nationals have openly and repeatedly declared that they are our enemy – at what point should we take them for their word? While those of us on the left keep saying we should bridge the divide, they’re making “jokes” about how they should shoot us.

Some say we shouldn’t stoop to their level, that you can’t fight fire with fire, but I say you can: it’s called back-burning and it’s a very effective fire-fighting technique – which, despite Nationals’ lies to the contrary, us inner-city types are well aware of. But as cathartic as it is, don’t let your ridicule be the end of it. Make sure to vote them out. More importantly: give money to their opponents (and lots of it). If you’re in a Nationals seat and don’t own a multi-national fossil fuel company, remember they don’t represent you. They represent the top end of town and they think they can pick your pocket and destroy your way of life whilst wearing a big country hat and blaming inner-city greenies who actually hold fuck all seats and fuck all power. And as one of those so-called “inner-city greenies”, I say that if the Nationals want a fight: they got one. It’s time to kick this scum to the curb.