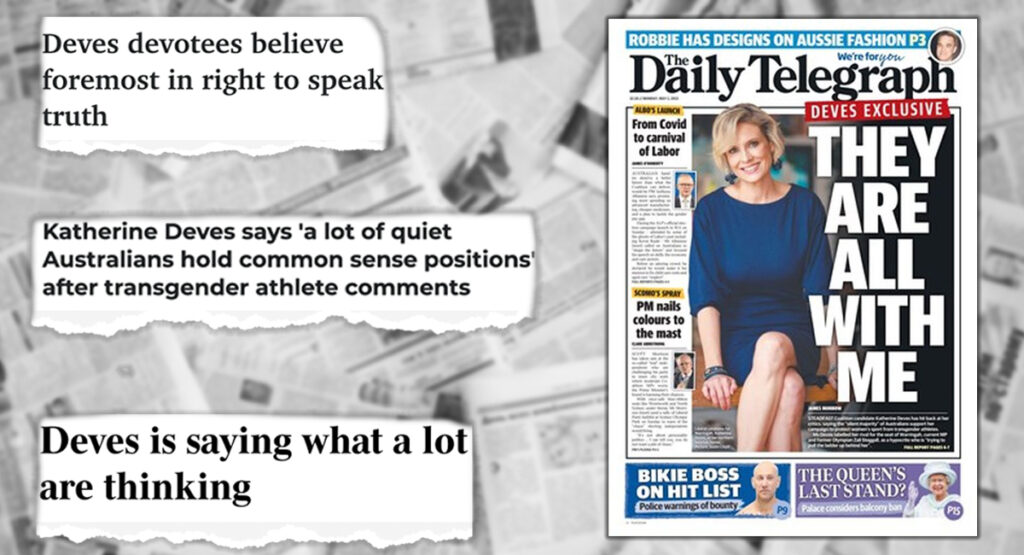 A long held opinion of mine keeps growing stronger and stronger, and as someone with an op-ed column I couldn’t just keep that opinion to myself.

As the title of this op-ed suggests, that opinion is that op-eds are bullshit.

Is it hypocritical to write an op-ed about my hatred of op-eds and how they are an outdated medium? Probably, but fuck it, hear me out, and I’ll explain why “I hate free speech in the marketplace of ideas.”

Theoretically, opinion columns are a vessel for open, honest and integrity driven discussion that can shine a light on issues or perspectives readers may not be privy to. They are a way to inform the public on much needed debates, and maybe even broaden discussion further than the stale takes of the rich-straight-white-cis-abled-men who control the media.

Opinion columns nearly always come with the asterisk that they do not reflect the editorial standards and views of the editors who approved and paid for the articles they chose to publish. This super convenient get-out clause inherently opens the floodgates to a pipeline of shite not fit for human consumption. And that can cause real damage to real people.

Consider the ongoing controversy surrounding Warringa candidate Katherine Deves and her ‘not transphobic’ plan to restrict the rights of trans people because she has an irrational fear of trans people. There should really be a term for that fear.

Deves has been an anti-trans bullhorn for years, with hundreds of transphobic tweets published on her now deleted account. In a video from February last year, she even compared her activism to being in the French Resistance and standing up against the Holocaust – a comparison that is completely fucking wrong in every way possible.

Her tweets were dug up by outlets like Crikey and News.com.au, who have criticised Deves and Prime Minister Scott Morrison for personally selecting her as a candidate. Yes, credit where credit is due, parts of News Corp weren’t actively supporting bigotry for once.

But in news that will not shock you, Deves until recently was a regular guest on Sky News After Dark, where Rupert’s biggest bigots have been vomiting their vile supportive opinion of her campaign pretty much every day since the start of the election, with some like Paul Murray attacking the ‘bias leftist media’ for digging up these tweets.

If you’re wondering why a news publisher would allow its opinion columnists to try to undermine the work done by its actual journalists, well that’s because of the aforementioned proviso that op-eds do not reflect the editorial standards or views of a particular outlet – which makes for a really big fucking paradox when the opinion is about the editorial standards.

The televised insane asylum known as Sky News isn’t the only outlet to have given Deves a platform. While Crikey asks how Scott Morrison chose to platform Deves despite her transphobic history, their editors did the same only a year ago. 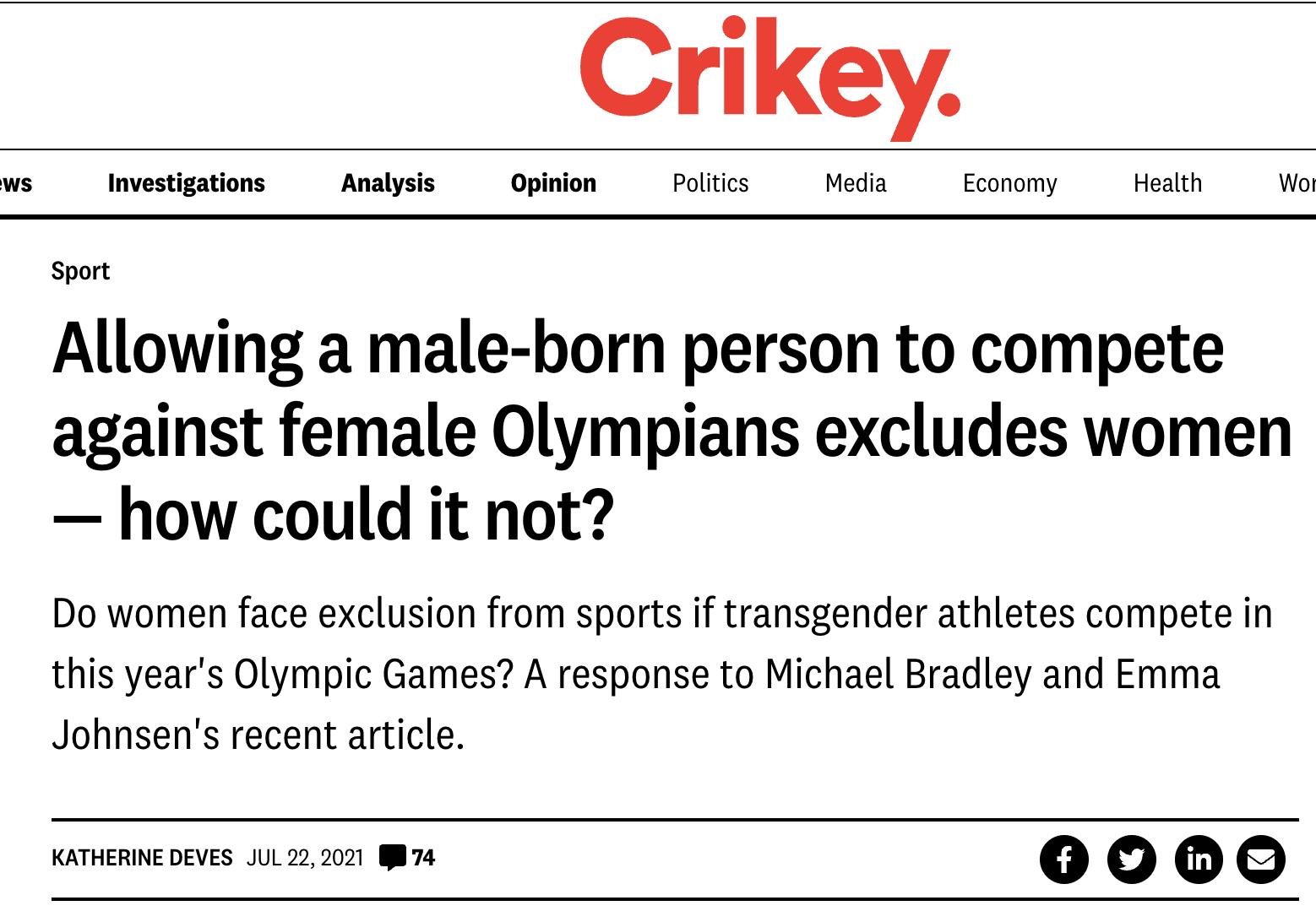 Crikey’s editors copped a lot of flack, and rightfully so, for not only publishing Deves’ bigoted opinion in the form of an article filled with dehumanising attacks on the trans community but also taking the paywall down from it. The editorial team that approved a factually inaccurate and discriminatory article attached a complaint line so they could ‘hear from the audience’ to fuel a ‘discussion’ of the bigotry.

The editorial team avoided taking responsibility for platforming bigotry by pushing the same old line that despite it being someone’s job to approve the piece, it does not reflect the views of the outlet. Whenever some factually-inaccurate bullshit spewing hatred is paid for and platformed by a paper, the editors are always quick to use this excuse, but what about when an opinion piece is good?

When Crikey journalist Cam Wilson wrote a strong, factually supported piece on Deves’ repugnant views explaining that she was selected because of her bigotry, Crikey’s editorial team blasted it all over social media as an example of what Crikey brings to the discussion. But, if platforming Deves’ opinion is meant to not be a reflection on their editorial standards, surely platforming Wilson’s opinion shouldn’t be either.

The notion that bad opinion pieces don’t reflect on those who chose to publish them is nothing more than a way to have your cake and eat it too; a way to feel better so you don’t have to worry about the minorities calling out in pain due to your actions.

And if op-eds are meant to lift voices that don’t get heard normally, let me ask you this: how many times have you read or heard the views of trans people in this debate? We’ve heard a variety of opinions throughout this discussion, from wealthy cis-straight white people to middle-class cis-straight white people. Surely the community being discriminated against should be the first point of call? The bigots have gotten weeks of air time to talk about their years of airtime, so what the fuck is this whole ‘lifting voices’ excuse except for a blatant lie.

None of this is new; this is how discussion of discrimination always goes. Wall to wall ‘opinions’ by cis-straight-abled-white  columnists and editors on issues regarding gender, sexuality, race, disability, Indigenous rights, etc. It’s a cycle of the same bullshit over and over, that just goes on and none of it leads to real change.

Until things actually change and outlets take real responsibility for the opinions they put out to the world, this cycle of anger, hatred, bigotry and the inflated egos of news editors will always continue. For now, there is only one thing this opinion writer can say about opinion pieces: they’re bullshit.

We can be better than this

Who won the Potato Wars?

Why most politicians have been so shit this election

Allow yourself to dream, Australia. Morrison may be at his end
Help us bring you the good news
Our writers can't be paid in exposure, but they sure can die from it. So if you like the stories on The Shot and would like to become a supporter, we'd welcome the money. Just $1 a month is enough for us to keep publishing stories.
Support The Shot
Already a supporter? Click here to never see this again!
Do NOT follow this link or you will be banned from the site!