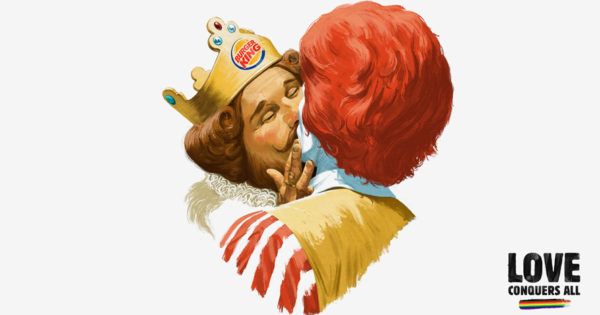 It’s safe to say that royalty can err on the side of conservatism at the best of times. The British Royal family (and by extension our own) recently baulked at suggestions that same-sex partners be included in the changes to the line of succession, which made allowances for first-born women and Catholics to take the throne. However, in the land of Burgerdom it seems things are a little more progressive, with no less than the famed Burger King himself now having passionately embraced a red haired clown in what is likely a firm breach of court protocol.

We’re not sure what exactly is more surprising here, that Burger King apparently has a mascot, or that they’ve just come out and declared him to be LGBT, along with Ronald McDonald in the process. Either way, love wins we guess, though this pride themed marketing campaign that has hit the streets of Finland this week probably won’t do much to assuage the complaints that pride has become little more than a month long marketing gimmick.

While clunky and not exactly to everyone’s taste judging by the almost universal condemnation online, it’s certainly not the first time a fast food chain has stirred controversy with an outspokenly pro-gay message. McDonalds famously faced calls for a boycott in the US back in 2010, after conservative outlets caught wind of a commercial on French TV which insinuated that they’d let gay people eat at their restaurants, before everyone promptly forget it had even happened when the next Fox News outrage of the week rolled along. The same thing happened to McDonalds Taiwan in 2016, so it’s safe to say Burger King had some catching up to do.

Will this marketing gimmick have any real effect on the acceptance of same-sex attracted people in Finland? Probably not. But will LGBT people everywhere feel a little bit better next time they visit a Burger King outlet, knowing that the large multi-national corporation supports them? Once again probably no. But it’s the thought that counts.