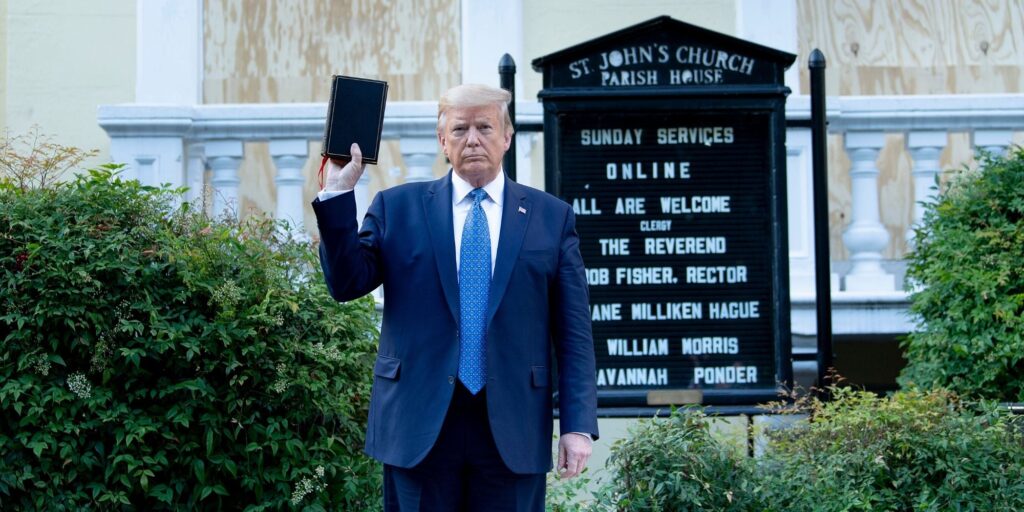 A priest who was helping treat protesters affected by tear-gas on the patio of St John’s church in DC has spoken out against Donald Trump after being chased away from the church by riot police throwing flashbangs and smoke bombs in order for the President to pose with his bible in front of the church.

The priest Gini Gerbasi, who is the rector of a different St John’s church, has since spoken out against the president calling the photo opp sacrilege and she has condemned the violent ejection of protesters, pointing out that brutalising people calling for an end to police brutality is not the solution to the problem at hand.

Those on the church steps were reportedly not asked to move or informed the President was coming before the attack by police, with those who were chased off only learning after the fact that the president was planning to stand outside the building, when texts from friends and family started flooding in.

Standing at the scene at the burned out church, surrounded with discarded medical supplies from those that had been chased away, Trump was asked by the press whether it was his own bible that he was holding up, to which he responded “It’s a bible.”

The photo opp has reportedly gone done well with evangelicals, who do not seem troubled by the fact that the bible held up by Trump is considered heretical by their sect, nor were they concerned by footage that resurfaced this week in which Trump refuses to name a favourite bible verse when asked on TV, stating instead that he simply likes both the old and new testament, and that any further details are private.