Entertainment
How I infiltrated a News Corp website and told Murdoch to fuck off
August 24, 2021 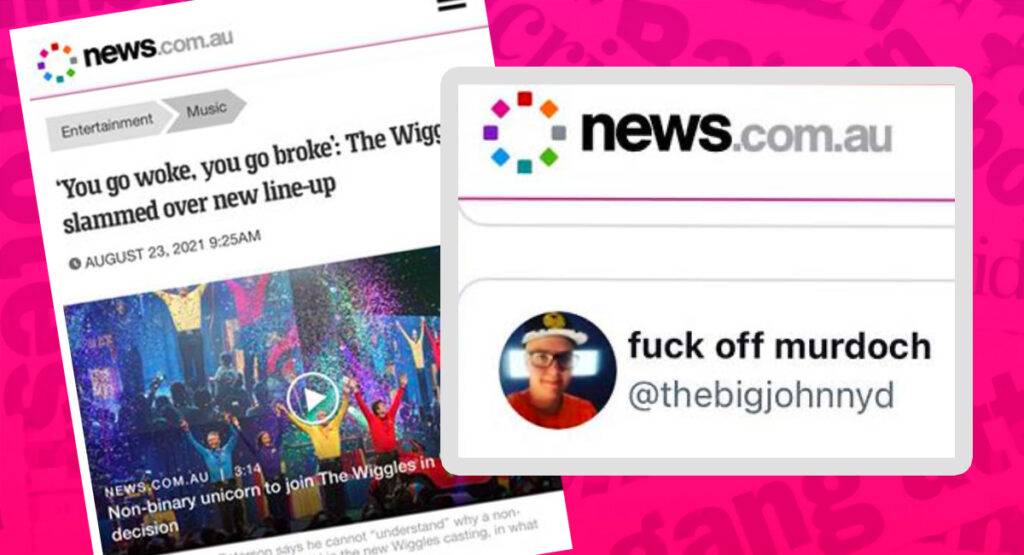 Today we at the Chaser team pulled off a stunt, an accidental and unplanned stunt but a stunt none the less!

As you may have heard professional blue-collar cosplay enthusiast Matt Canavan threw a temper tantrum over the recent expansion of the Wiggles, a band for children, due to the new members not all being white men. Claiming they would ‘Go woke, go broke’. Naturally I mocked him for it, then when I woke up the next morning I saw my tweet was blowing up:

It was doing so well in fact that Newscorp’s very own News.com.au featured the tweet in an article about Canavan’s stupidity, foolishly embedding the tweet instead of screenshotting it. By embedding the tweet, readers are able to react and respond to it, however it also means if someone wanted to be an asshole they could change their name to something in a bid to mess with the article.

So that’s exactly what I did.

You would think Newscorp would learn to stop using the Chaser as a source pic.twitter.com/ytR2UM8DuS

Now you would assume that after ‘fuck off murdoch‘ appeared in the news article, and a screenshot was posted on twitter, then that screenshot was shared by the Chaser account, you’d think that tweet would have been taken off the article. But then you need to remember we are talking about News Corp editorial standards. So I decided to see how far we could push this:

All that before my next big swing to get kicked off:

I was now half-an-hour into this gag and still no takedown. Also apologises to any followers who didn’t know what was going on and saw my changed screen names.

Clearly though none of those were going to get the job done either. News Corp editorial standards were proving tricky to break, so I tried something else because at this point the stunt was taking way too long, and I like to imagine I’ve got better things to do.

Before offering some advice to the website that I was essentially a columnist for at this point.

At this point it was becoming clear to me that News.com.au was not going to take me down on their own, so I tagged their social media team and thanked them for letting me perform to their audience for hours:

Sadly that tweet did mean the end to my set (and again, I want to apologise to anyone who followed me and had no idea why my name was that). So I celebrated by finishing off my thread:

Success, my tweet was taken off the article! Now @newscomauHQ who do I invoice for all the material I gave you?

I know it might be surprising for you to see a Chaser contributor ask a company like News Corp for money but remember The Chaser was once on the ABC, so clearly we’re not against being paid by a taxpayer-funded media organisation.