loading...
General News
A message from the Governor General – the media is the message
September 13, 2022 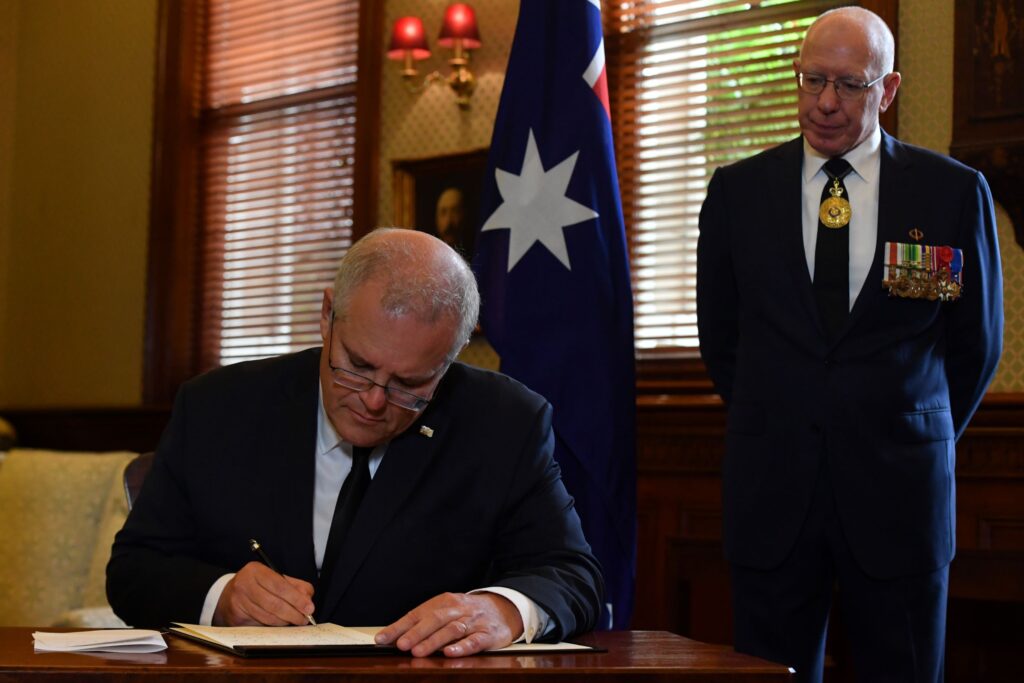 Somewhere in the slowly emptying drain of last week’s news bulletins, a story about Australia’s constitutional monarchy leaked out. No, don’t poke your head out the window yet. Not the bigger monarchy one, we’ll get to that one – another one. A story broke about the Governor General and his odd, unprecedented actions.

The core of the story came out on the ABC in April via Stephanie Borys from a well-placed leak, one that had clearly been timed to coincide with Senate Estimates the previous day. Australia’s Governor General, it seems, while resident in the glorious surrounds of his $25 million a year Office of the Governor General, had been pushing very hard to have a pet project of his funded by the Morrison government – or more correctly, the Australian taxpayer. You.

That this lobbying for cold, sordid cash from the Australian taxpayer crossed a line between the alleged neutrality of the Governor General’s role and a proclaimed lack of political influence, seemed to bother him not a jot. It didn’t seem to bother most of our media much either. So keen was the GG that he even put his name to this program nobody in Australia had heard of – the Governor General’s Future Leader’s Program.

In various GG diary entries and conferences, David Hurley (or as many Australians call him, Who?) had trumpeted the wonderful new leadership program his hale and hearty acquaintance Chris Hartley would be driving.

The only problem was, there wasn’t really anything there. The leadership program was more like a seaside mist; you could sense it fogging up your vision, but you couldn’t really grab on to anything. Sure, it had a lot of marketing slogans about facilitating fresh thinking from the next generation of digital native Australian leaders and a cadre driving the next generation of mid-tier leadership capability, but apart from the digital natives and the mid-tier cadre driving, nothing much else seemed to exist. 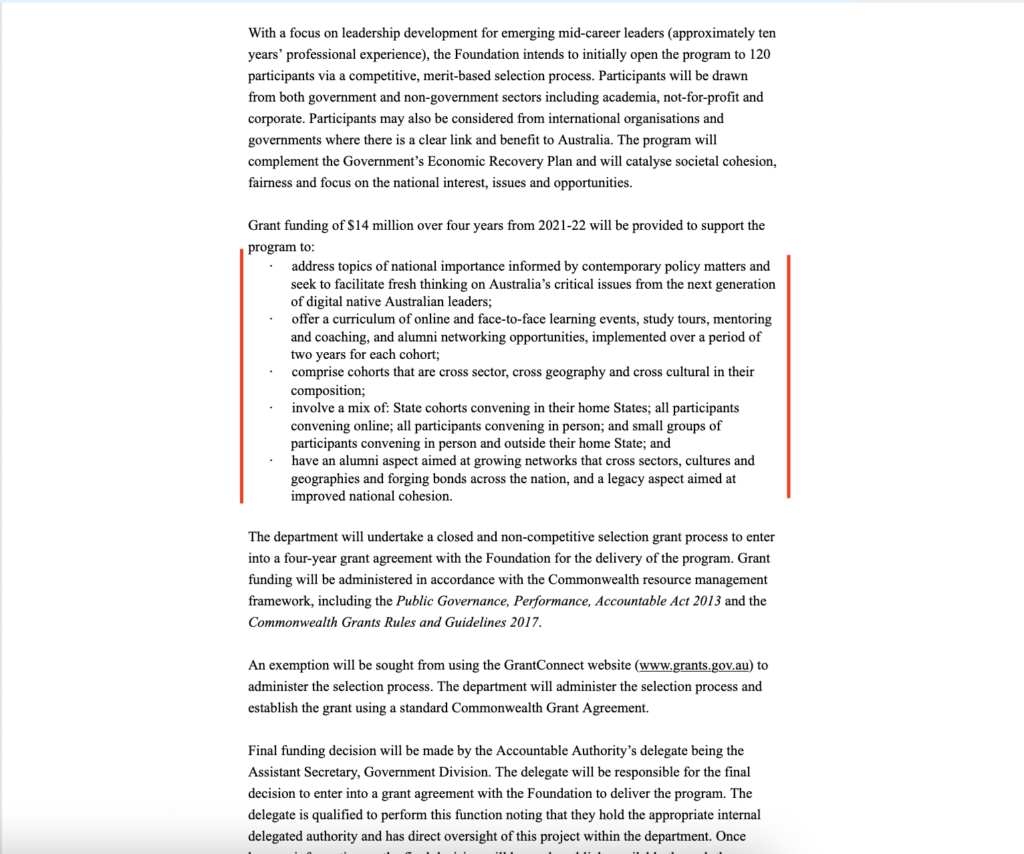 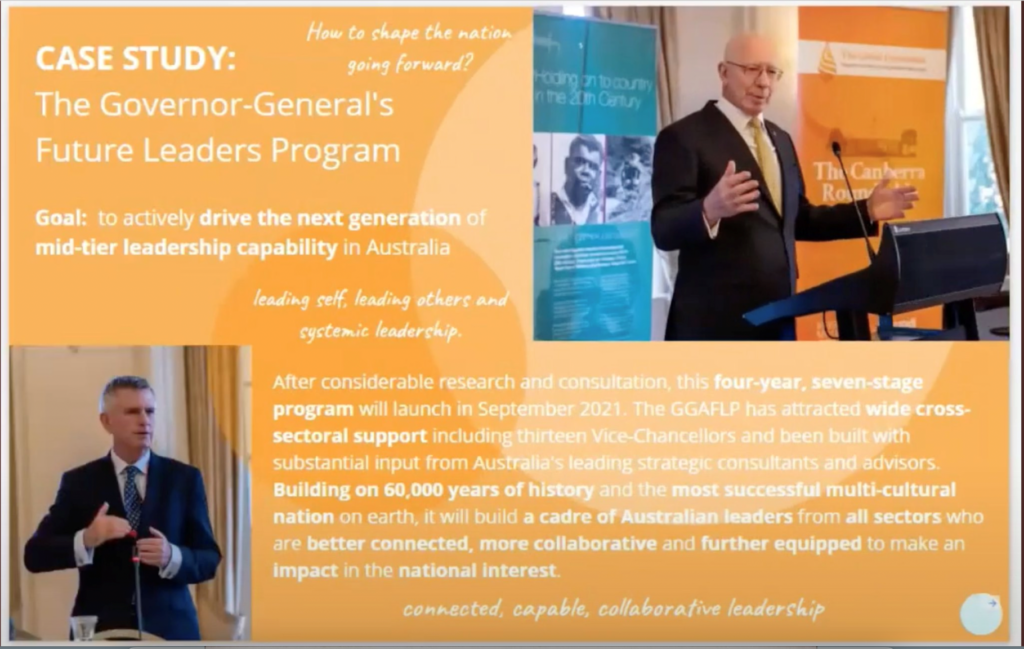 There was no office, no phone number, no web-site, no staff, no anything really. There were also no names of any sponsors or supporters, no details of the program, and no publicly available reports, sources or evidence of any kind to support the need for the program. And yet despite this miraculous lack of anything other than unknown cadres driving mid-tier leadership natives, the program managed to secure $18 million, with a further $4 million a year in perpetuity – all from Scott Morrison’s mysterious bikkie barrel of money. Not Scott’s money, yours.

But, in the way Australia’s media works, the matter was soon forgotten once the federal election was called on April 10. They like to be fed a fresh news bauble to play with every week and the story of a Governor General seeking millions of dollars for his pet project from the Prime Minister, without a grant process or any formal evidence, probably went to the bottom of the cot with all the other discarded toys.

That’s where it might have stayed, if not for the fact that in August, Scott Morrison got caught having signed himself into a multitude of ministerial roles in secret while he was Prime Minister without telling anybody except the Governor General – who also didn’t feel the need to tell anybody. And really, who wants to know about that sort of annoying transparent democracy thing? The GG’s published diary can only tell you so much about sheep dog awards and meetings with the RSL president, and not the fact that the Queen’s representative had quietly assented to Scott Morrison secretly assuming the role of federal Treasurer.

And here’s where the story got a bit tricky for both men because as it turns out, during the eight week period the Governor General and his office staff were actively lobbying for, and receiving confirmation of, the $18 million grant (it started out at $14 million but somebody randomly threw in another $4 million because why the hell not) during that same time, the Prime Minister Scott Morrison was also seeking a quiet sign-off on becoming Minister for Industry, Science, Energy & Resources, and Minister for Home Affairs and let’s round it all out, the federal Treasurer.

What’s wrong with that?

If you have to ask what’s wrong with that, it’s probably time to stop reading. When this strange set of compromising circumstances came to light and was then pointed out to Australians via a very lengthy twitter thread by yours truly and Mr Tee, the matter was met with stunned outrage by ordinary Australians and then – stunned nothing by Australia’s media. The saddest part of this? Nobody was the least bit surprised.

There’s been a lot of discussion this week about the role of various players in the Morrison Ministry scandal.

Much of the discussion has focused on Scott Morrison’s actions in this unprecedented event.

But what about the actions of others in this?

A coterie of political journalists who got their kicks from chasing Anthony Albanese out a door on his way to a plane to supportive cries of “This is journalism!!”,  and who threw themselves into following Scott Morrison around to film, erm, his hairs getting cut, suddenly came over all coy in the face of an act of major political compromise. Even when the matter managed to raise itself on the ABC’s Insider’s program for 30 seconds, David Speers referred to it apologetically at the last minute as if he’d just spilled his tea.

Nobody wanted to talk about it. Like a dead bird rotting in the corner of the outside bungalow, everybody could smell the odour from the Governor General’s favourable treatment of Scott Morrison and Scott Morrison’s special treatment of him in return, but nobody in the mass media wanted to touch it or poke it with a stick or take it out to have a look at it lest they get some of the stench on themselves too. Far better to doff your cap and indulge the current power structures and just, well, pretend the smell wasn’t there.

Edward Bernays, the master of public mind manipulation wrote back in 1928: “Propaganda is the executive arm of the invisible government”, and the invisible government in this instance is mass media and those who control it. It’s not that Australia’s traditional media were engaging in collusive propaganda by ignoring this issue, at least not actively. But by their very silence, they were indeed propagandists.

There is no silence too trivial that it cannot influence the public in a favorable or unfavorable sense. The mass media’s silence sent us all a very loud message – we only talk truth to power when it suits us, not you.

Fortunately for the Governor General, just as the $18M+ mates-and-favours grant was squashed at the last minute by a late-night Labor government “audit” (after looking at their media monitoring and also realising the issue was about to be loudly debated in federal parliament), the Queen, with fortuitous timing, promptly died.

As we’ve all too painfully noticed, traditional media over the past few days has turned into Mr Collins in Pride and Prejudice and embarked on a simpering conga line of bowing, curtsying and scraping the bottom of their forelocks in deference to the established power structures. That deferential thinking, that desire to reinforce existing power and not rock the boat is exactly what has underlined the lack of coverage of the Governor General and Scott Morrison. Keep yourself nice. Maintain the status quo. Know your place.

We live in an Australia, and a world, where traditional media operate and broadcast within increasingly smaller and smaller spheres. There is as much traction and often a larger audience on a well-researched twitter thread than some pages of the daily news sites. Increasingly the fabricated barriers between what is traditional media and what is social media are being washed away, until all we are left with is a flowing pool of publicly available information.

Quality information is available everywhere, at any time, in any type of forum. The issue of two powerful men possibly exchanging favours may one day fade into the background, it may not. But the relevance of the traditional media who failed to report on it most definitely will.

The Governor General and the traditional media who protect him should remember that all power, no matter who holds it, crumbles eventually. Just ask the Romans. 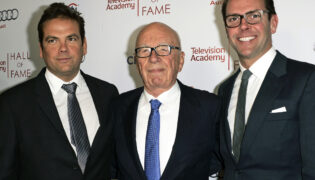