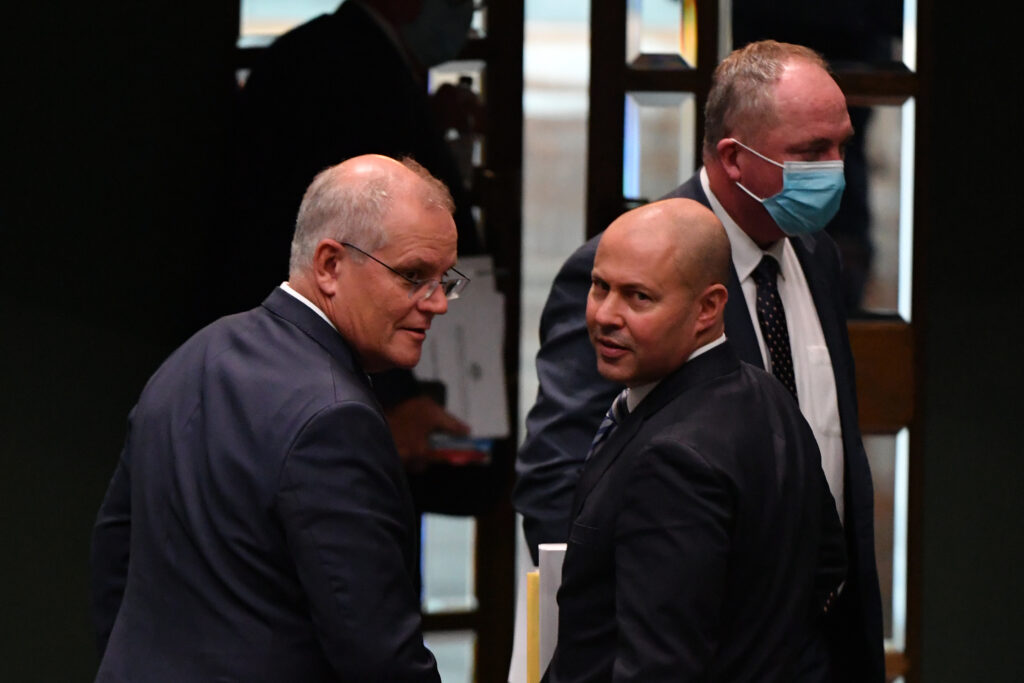 Your election campaign is four weeks along and almost five hundred for-fuck’s-sakes away from finishing Australia, but important questions still need to be asked. Penetrating questions like have Alan Tudge’s family and friends released a video yet pleading for his safe return, and where has our government hidden the cattle fondling, Hansard deleting, birth-control enthusiast, Deputy PM Barnaby Joyce? Buuurrp.

Making up last week for all the missing Morrison government troops hiding under their media officers, was JoshKeeperMe Frydenberg who’s been busy reminding Kooyong who he is after spending the past three years pretending he’d been elevated to the Treasurer’s position on the basis of mates and favours instead of the people in his electorate who voted him in and are now about to vote him back out.

It’s true sir, Josh has barely stopped for breath with his look-at-me-with-some-plebs-selfies and his pixelated scout troop bombing and his charity endorsements that result in, whoops, employment suspensions. It’s madness out there in Joshville. He even had to deploy a surface-to-air-snipping missile, telling 1970’s mother-in-law jokes at a pub around the corner from the candidate’s public forum he was too busy to attend in case he encountered members of the public.

Like a desperate boyfriend on his last text, Josh took to the debating stage this week and to be fair, spoke with the usual pizzaz of leftover hole-punch droppings. His main argument to the good burghers of Kooyong was that they should keep Josh please very much, because to vote him out is,  well, to quote Josh, “it’s not what I want”. Who said entitlement is dead?

The Muragappan family probably told border security police the same thing when they were hauled out of their home in Biloela into the night with their small daughters four years ago – It’s not what I want!! If only they’d been more vocal, they could have foreseen a new slogan for the election campaign, something the Liberal party intelligentsia have sadly overlooked:

“Don’t vote for the other person – it’s not what I want.”

But Josh’s Greatest Hits Farewell Tour did make a pleasant diversion from the cattle yards of the travelling Canberra gallery press conferences, or to put it more accurately, the Piñata Bashing Pressers.  With all the reverence afforded an obnoxious 8 year old’s birthday party, Australians could watch live as political journalists with the hopes of the nation on their shoulders screeched like possessed children with lime cordial toxicity, shrieking and bashing away at the piñata in the form of the Opposition Leader, Anthony Albanese.

Oh the sheer delectation, watching them smash the papier mâché politician until an answer tumbled from the shattered body, scrabbling to get a treat as they simultaneously checked their phones for questions they might have missed from the Prime Minister’s office. Eventually one of the kiddies would cry out, hold a triumphant lolly aloft, checking themselves in camera before the entire display was televised back to the studio and served to Australians as a form of public interest journalism to a public that really isn’t that interested.

What’s that madam? You want to hear Albanese discuss his policies instead of reciting point numbers? Oh no I’m sorry, none of this is for the public’s education. This is purely for the benefit of the piñata party invitees, there are contracts to be negotiated, Instagram accounts to be updated. Look at me mummy, no not the politicians, I’m the star of the show.

At least where for art thou Barnaby had the good sense to stage a presser out in the open to allow the bullshit to waft away in the fresh air. Kept away in hitless protection, only identifiable by his hat and skin colouring, the rubicund one did manage to escape up to the northern nether regions to Townsville to shout at a Sky News man that Malcolm Turnbull was the, “ULTIMATE ENTITLED PERSON!”

There is something deeply galling being lectured to about entitlement from the burgundy boondoggler who banked $650,000 for pretend text messages, handed over $178 million of Australian’s money for water that doesn’t exist, and whose core demographic is men who wear their wives and their pocket knives as fashion accessories. Entitled? Buuurrp.

When Barnaby wasn’t talking about his favourite subject – no not family law – statesmanship I kid you not, he was busy keeping George Christensen’s replacement, George Christensen The Sequel, company on the hustings in Queensland in an RM Williams ad I pray they never make.

Barnaby Joyce campaigning in North Queensland today with Senator Matt Canavan and Dawson LNP candidate Andrew Wilcox, who is attempting to retain the seat for the party following George Christensen retirement/defection to One Nation #auspol pic.twitter.com/VMNFH3YiHq

If we believe the meeja, Barnaby had allegedly just given Matt Canavan a good talking to about net-zero and keeping quiet about coal, the same Matt Canavan whose publicity photos are surely the answer to the question: if I dragged my bum through charcoal, what would it look like?

Barnaby, buurrp, was on a mission to stop Matt’s No-Net-Zero Hero routine, although how he did so while Matt was hiding in an anti-abortion march full of womb less men and Minister Dumb Maiden is anybody’s guess. When we weren’t paying members of the Morrison government on $300,000 + a year to march with fetus signs and plastic dolls, we were watching them respond to the vital election question every Australian should be asking – are Allegra Spender’s corflutes power pole compliant?

Dave Sharma (he of the highest TER score of 1993 thank you very much) justified his education, and monstrous perks plus salary by driving the streets of Wentworth filming power poles and measuring signage heights while Richard Colbeck, the Minister for people dying in aged care, disappeared to the under-12 cricket as another 89 Australians died from covid in aged care for the month of May. But hey, who’s counting all that death stuff when you can watch Scott Morrison shove turmeric in a shopping basket?

This is where we are.  This is the heart of this election campaign – entitlement, denial and ignorance. The land of man-speak and wankery where all a male politician has to do is pretend people aren’t dying, or simply disappear, or stand in front of a camera, give a wink to the circle of jerks and talk pig-swill while women of the calibre of Dr Monique Ryan and Zoe Daniel are referred to as “them” and have their characters and their signage attacked and not their arguments.

Who cares if federal ministers vanish in the middle of an election campaign? Who cares if they talk shit, Barnaby? That’s Morrison’s entire election platform really – men talking shit. Keep moving, keep hurling paper towels at the crowd’s heads. Tomorrow’s another day. There’s more shit to be thrown. Just ask Zoe Daniel who had fresh shit thrown at one of her roadside corflutes in Goldstein, which sure beats Corporal Tim Wilson, who’s usually throwing it at himself.

The entire election campaign has been a game of who can survive the weak. Weak men, weak media coverage, weak arguments, weak leadership, and if that sounds like a summary of the entire three years of the Morrison government, don’t tell the press gallery. Judging a government on the way it has actually governed is for the little people. This is the age of entitlement.

For everybody except you.