General News
From Tampa to COVID, the military is the Liberal Party’s fuck-up band-aid
August 24, 2021 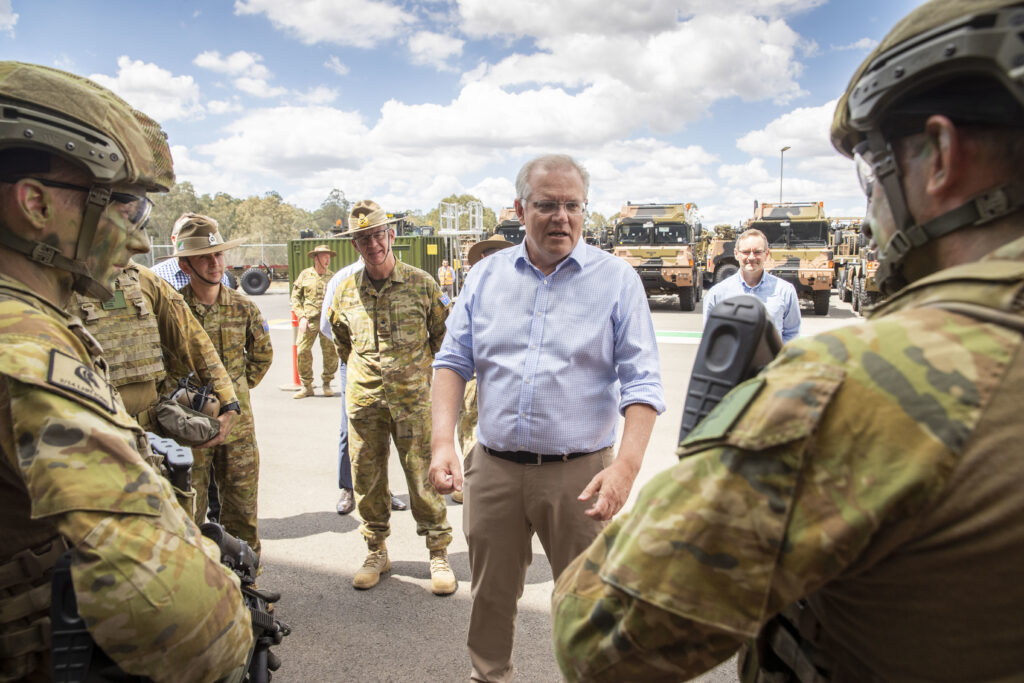 Scott Morrison sure likes playing soldiers.  So far this year he’s flexed his military muscles by dispatching troops everywhere from wildfires, to quarantine hotels, to LGAs of Concern in Locked Down Sydney.  But a particular favourite is undoubtedly deploying Generals to front the cameras as part of absurdly named Operations previously within the remit of our now-hollowed bureaucracies.  Perhaps we should be grateful these military-run projects prevent yet more opaque contracts being handed to consultants, but his labelling of domestic policy as military-style Operations is a childish habit and a cowardly dodge of responsibility and carries with it an authoritarian whiff that might fail to register given the frequency with which conservative political leaders bolster credibility by clutching at uniform coattails.

Fawning veneration of the military has been a hallmark of Coalition Governments since the Dark Wizard John Howard promoted the humble ANZAC as a national superhero alongside Bradman, Phar Lap and the meat pie.  Howard’s response to the Tampa became our first template for siccing the military on people in desperate need. It’s now 20 years since we dispatched the SAS to the high seas to storm a Norwegian shipping vessel and quell the grave threat of 400 hungry scared souls sitting in exhausted lines on its deck.

The response on the mainland gave him succour and Howard was thus encouraged to experiment further with military might when the Little Children are Sacred report hit his desk in 2007. Previous reports into stark conditions in Aboriginal communities had gathered dust, but when media attention on this one cut through, Howard devised the Intervention and sent the army into the Northern Territory, a novel way of handling a social crisis, more Suffer the Little Children than shoring up the sacred.

So when we next turned to the military to enforce immigration policies, it made an iniquitous intuitive sense, inured as we were to our complicity in cruelty. Operation Sovereign Borders was Morrison’s cunning plan that matched sophisticated warships against leaky fishing boats and found favour amongst Australians pacified by it happening far from sight, and satisfied with the bottled water and protein crackers and occasional orange dinghies offered to the desperate in lieu of sanctuary.  Operation Sovereign Borders also inaugurated the explicit use of uniformed props, with the inscrutable Angus Campbell a quick learner of the art of the stonewall. Peter Dutton meanwhile was so taken with the parade of uniforms at press conferences that years later, as Immigration Minister, he clad his bureaucrats in costumes.

Morrison was taking heat for our disastrous vaccination rollout when he dreamed up Operation COVID Shield, clearly designed to shield someone from something.  If the military is so readily available to assist with complex logistics, though, it does beg the question of why they could not take on the evacuation of Australians and local helpers from Afghanistan?  Where was Operation Nemo Resideo when we needed it? An Australian Dunkirk for Dummies? This life-and-death project did not attract the same urgency as the Coalition’s many Operations Restore Credibility. No military assistance with logistics in this case, and certainly no attention paid to the veterans who served if it meant opening our borders to people who looked like those Operation Sovereign Borders kept out. It seems our Government only likes the military when they’re mouthing its scripts – insisting on-water operational matters require secrecy, or leading business brainstorming sessions on vaccine hubs at Officeworks – and not when they’re requesting assistance for their Afghan comrades in arms.

It is to be expected that the Government would ignore Bill Shorten when he first raised the issue of extracting our Afghan workers in 2018, but they also shrugged off the increasingly desperate pleas of brave veterans, as easily as they’d ignored the pleas for help from damaged returning soldiers, or the calls for a Royal Commission from the families of those veterans who died by suicide (until politics and Jacqui Lambie prevailed). Captain Jason Scanes has been trying for eight years to get his interpreter out – eight years!  His letters were ignored, requests for meetings denied until a four-day vigil outside Dutton’s office finally drew an advisor out to offer platitudes. Retired Major Stuart McCarthy set fire to his medals in a bid to attract attention to the issue and got a visit from the Queensland Police for his troubles. Even Howard popped up on ABC RN in July to say we had a moral obligation to assist our Afghan helpers. Shortly after, Immigration Minister Alex Hawke stated firmly that we had “no plans” to join the evacuation operation the US was organising, nor mount one of our own.

Well, why the fuck not?

The only time this Government comes up with a plan is when they need to hide the fact their previous lack of plan, action, effort, courage or all of the above has got us into yet another godawful mess.  If they’d taken up the offer from our allies in July there’s a good chance that instead of Morrison’s doleful words of regret on Friday that “we wish things were different”, things would, in fact, be different.

Things might be different, too, if we hadn’t created a Byzantine maze of administration for the local Afghans to navigate before they could even start their visa application process, and then left them lost in the labyrinth when we peremptorily shut our Embassy in May. And now they are told they must wait for an orderly retreat, must wait their turn amongst the deadly chaos, even as the dramatically deteriorating situation means few can make it to the airport at all.

And so we survey the tumultuous scenes at Kabul airport, stampedes of the endangered braving a crescendo of gunshots and despair in attempts to flee the Taliban 2.0, hyped as a newly reasonable, OK-with-being-interviewed-by-women, fun-dodgem-car-driving Taliban, but displaying the same old commitment to barbarism when the cameras move on, while Morrison stands before us warning with a theatrical solemnity that we should prepare ourselves that “despite our best efforts… support won’t reach all that it should.”

Best efforts? There was no fucking effort at all.

The callous, lazy indifference of this Government would be shocking if it weren’t so stultifyingly predictable. We sit through repetitions of the mantra that “many are wise in hindsight” as if there weren’t countless wise with foresight, who sought frantically to get the Government to do something, anything, to assist those to whom we owed such a debt.

We first watched the Taliban take the Uruzgan Province, where Australian troops were stationed through the long years of war and the bulk of our 41 dead lost their lives. We then watched the Taliban storm Kabul, terror preceding them and left in their wake. We watched as women disappeared from the TV screens, and then the streets, and gender apartheid returned to Afghanistan again. We asked sadly if anything was gained by our 20-year frolic in this desecrated country. We wondered bleakly if it was all in vain.

Not so, declared Morrison, soon echoed by Howard in awkwardly similar words, the ex-PM on 7:30 a throwback full of familiar bluster and odd sibilants, which, if nothing else, reminded us that something resembling a functional Coalition Government did historically exist. “Freedom’s always worth it, fighting for it, whatever the outcome”, the incumbent intoned, avoiding the question of freedom from what, and for whom – the answers apparently irrelevant to either us or the grieving nation in which we fought.

And the men who died there – for what did they die?  This aforementioned unspecified freedom?

“No Australian who has ever fallen in our uniform has ever died in vain – ever” Morrison vowed, an illogical assertion that leads confusingly to the conclusion that the very fact of Australian soldiers being and dying in Afghanistan means we could not have been there in vain. Because they were wearing our uniform when they died, ipso facto the cause must be worthy. And because the mission was noble, it was good that we were there, and any sacrifice was worthwhile. This circularity alleviates the need to admit we were really there in obeisance to the US, Deputy Sheriff once more, or to justify the hard truth that thousands of lives, 20 years and trillions of dollars later, Afghanistan is right back where it started.

When numbers at Anzac Day marches fell, as years and Diggers passed, Howard began a conscious drive to elevate the story of the Anzac and Gallipoli in our national psyche; to weave a deeply conservative myth of patriotic pride and lost youth, of sacrifice and nostalgia. What began with invocations of khaki mateship and sacred blood culminated in the gauche idolatry of the Centenary of WWI where some calculate Australia spent as much as $700,000,000 on commemorations, more than 3 1/2 times all the other countries combined, which, given these other countries are the “someone else” in the “someone else’s war” we were fighting,  is astonishing. This tsunami of cash has since been boosted by the investment of half a billion dollars in the expansion of the War Memorial – secured by well-connected leaders with friends in high places (as well as a friend or two who’ve sunk very low) – even as other great national cultural institutions are starved of funds, one efficiency dividend at a time.

Dead diggers are easy to love, it seems, and the living easy to ignore. Until you need their brass and braid to hide behind.

The embrace of the military is in line with Morrison’s uniquely irritating Australian flag mask – another form of performative nationalism of the Team Australia variety.  If our hallowed troops are above reproach, Operation COVID Shield can’t be a risible strategy to distract from previous failure but is rather a masterful logistical achievement from those who are owed gratitude, not scrutiny.  Australian uniforms – even those accessorised with Crusader Crosses – are a big boon for those who wear them, if not for the locals who accompany them in our theatres of war.