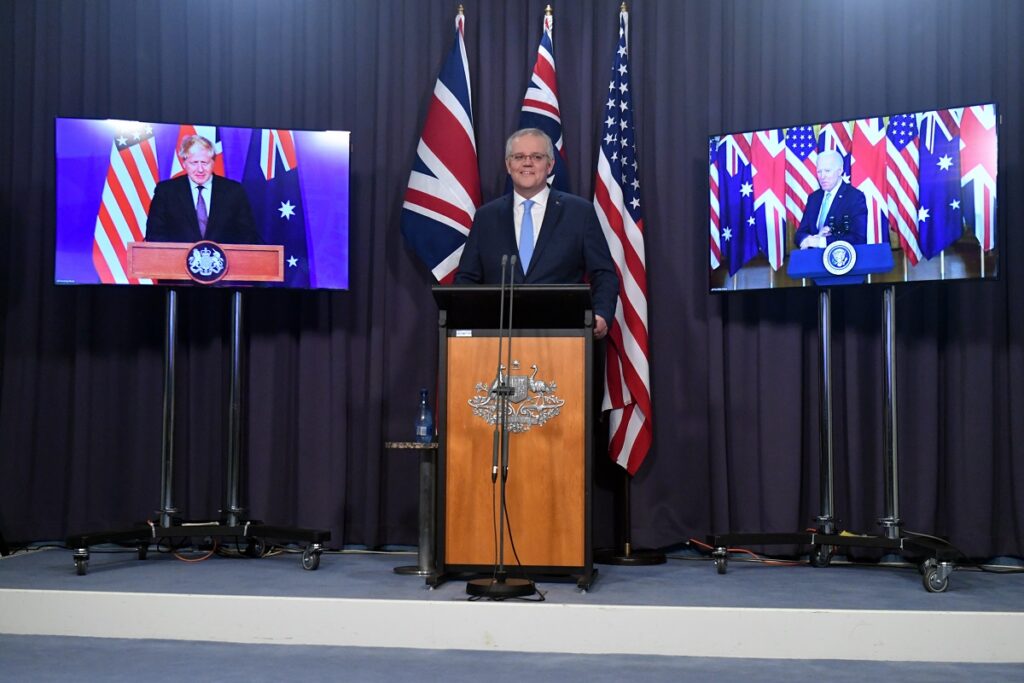 In a scene from the American political satire Wag The Dog, Robert de Niro, playing a political Mr Fixit, lies half-asleep in a plane grappling with a solution for the political crisis about to smash the fictional President about his fictional head.

The President needs a story. A distraction. Not necessarily a true story, just a story-ish – a diversion to buy them time until the election.

And the distraction? A war. As his off-sider frantically toys with literalism, insisting America really can’t afford to go to war, De Niro, in an act of perfect metaphor, mutters from underneath his eye blindfold: “We’re not gonna have a war. We’re gonna have the appearance of a war.”

In the months leading up to the release of Morrison’s much vaunted (and seemingly his own personal property) Doherty Report, I’m convinced Scott Morrison’s strategists had that movie on repeat. I say almost, because I doubt many of them aren’t already word perfect in its dialogue, so close are they to the movie’s main characters of spin-plot-spinners and WhatsApp bothering schemers, determined to save their political boss no matter what the cost.

But how do they do it? On one end of the scale, we have the people who believe the entire charade of politics is made up and if it’s not made up then the “mainstreameeja” must all be in on it with them, sort of like fake moon landers but without the flags. On the other end are the people who let information flow over them like a long shower, obliviously taking it all in, the type who truly believe Scott Morrison once saved a lady from near death on a Sydney beach because 2GB said so.

Unlike my cliched analogies there, the answer isn’t nearly as simple. The game of political strategy and obfuscation, the effluvium of the dark art of spin, can be confusing.

If we were in a TED Talk right now, this would be about the time I pointed loudly to an oversized photo behind me of a group of American soldiers about to raise the US flag on a pile of war rubble. You know the one. You’ve seen that image at least once in your lifetime – four or five or maybe even six soldiers, grasping an almighty flagpole as they hoist the stars and stripes skyward like a giant middle finger, the up-yours of American supremacy. We all know the image. It’s iconic.

Now riddle me this. Exactly how many people are in that photo? What date was it taken? What was the specific geographic location? Who took the photo? What were the soldier’s names? Details, schmetails.

Nobody remembers them because nobody cares. It’s the image that’s important.

That image is seared in people’s minds purely because of its symbolism, its simplicity. That’s how symbolic imagery works. Like a McDonalds drive-through menu, it’s not designed to be complicated. It’s not meant to have detail to it. It’s meant to float above you in the sky like a majestic gossamer net, with just the vast flowing imagery embedded in your mind, no details to complicate it.

Because when something is so large and powerful, so symbolic and simple, it infiltrates our subconscious. Like that photo of the six American marines in Iwo Jima (now you’re learning something) we may not be able to tell anyone the details, but we can all recall powerful imagery, what it represents, and, more importantly, how it makes us feel. 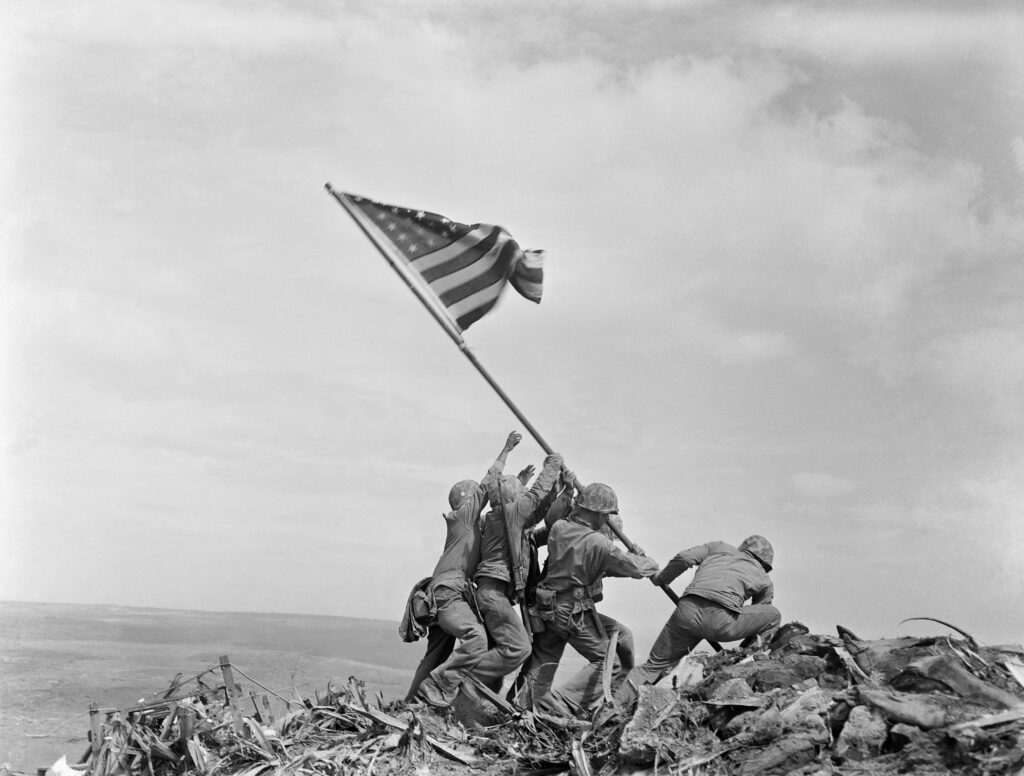 If you take that imagery and your understanding of it and place it in a political context, that’s what Scott Morrison’s team play with. Imagery. The grand narrative. The idea that you don’t focus on the details too much, you just remember how it makes you feel.

They want you to think that Scott Morrison is our own powerful leader, the one that will lead Australia out of this mess, and they want that image embedded deep down into your subconscious, without any annoying detail to bother you or meddle with your own private photo album.

The way they keep that imagery afloat is by pumping it full of air and reinforcing it all the time, constantly, every day of every week of every month in every way. Scott is strong. Scott is our hero. Scott will lead us all to safety.

Think of Scott Morrison holding up a plane in Kabul to save a woman and her baby. Or at least that’s what the Daily Telegraph told us. I’m going to ignore the dry retching noises coming from the audience, you ungrateful cynics. What’s that? It didn’t happen? Of course, it didn’t happen.

Sometimes, the truth has nothing to do with pumping the net up. Sometimes it does. As De Niro snaps in Wag The Dog,“What difference does it make if it’s true?” If you learn anything from our imaginary TED Talk, learn that reality, like detail, has no real place in the political grand narrative.

For grand narratives to stick you have to distil complex issues to their most basic elements: There’s a right and a wrong. There’s a hero and there are villains. And there will be a great challenge to be overcome.

Sound familiar? Never heard of it? In fact, we’ve been surrounded by nothing else in Australia for the past month. 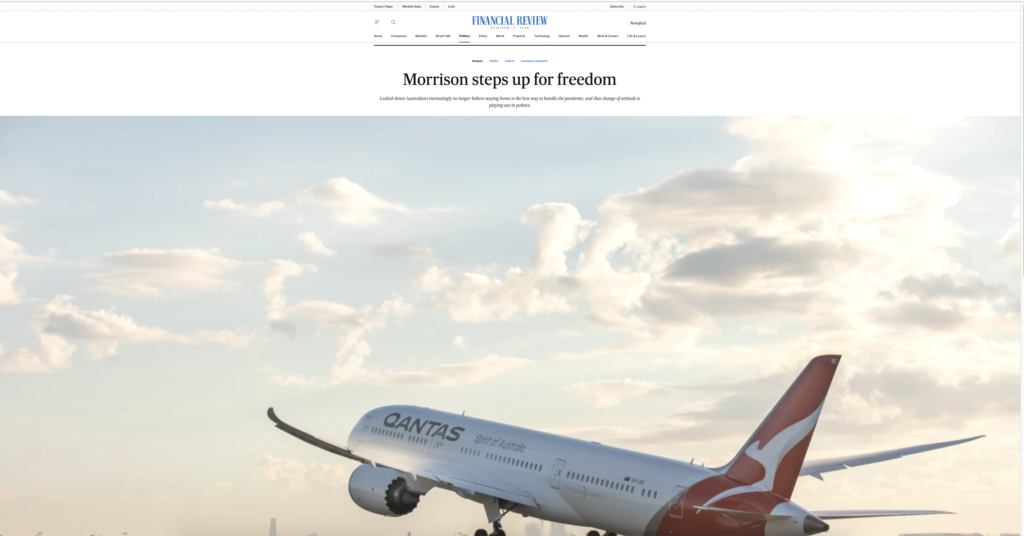 Those of you who continue to focus on the fact that the states and territories aren’t actually at war with the Morrison government and have been reasonably cooperative overall are missing the point. We’re not gonna have a war. We’re gonna have the appearance of a war.

What the scientists and medicos at the Doherty Institute thought they were doing when issued with a brief to provide modelling for Australia’s post-Covid vaccine future, was an indication of how Australia could cope with living and dying with Covid. And that’s exactly what they were doing. It’s exactly what they did. If they’d been political strategists and not scientists who deal in absolutes and realities, they would however have also sniffed the faint taint of a political strategy floating silently underneath their brief.

That’s how the very best spin-strategists operate. They take a real moment, the bigger the better, and they exploit it for their own outcomes. That’s how the Doherty Report was hijacked by Team Morrison and shot up into the air, floating like a silken net and turned into part of their grand narrative. Our hero, Scott Morrison marching down his RAAF base red carpet, against the states. Complex issues distilled to their most basic elements.

And long after everybody has forgotten what percentage of vaccination was what and whether Annastacia or Dan actually said you absolutely could not have a picnic, Team Morrison are banking on you remembering that one thing – the deeply ingrained feeling that Scott Morrison is a strong leader.

And like all the greatest imagery, unless somebody asks you to remember the angle of the flag pole, you won’t even know it lives there.