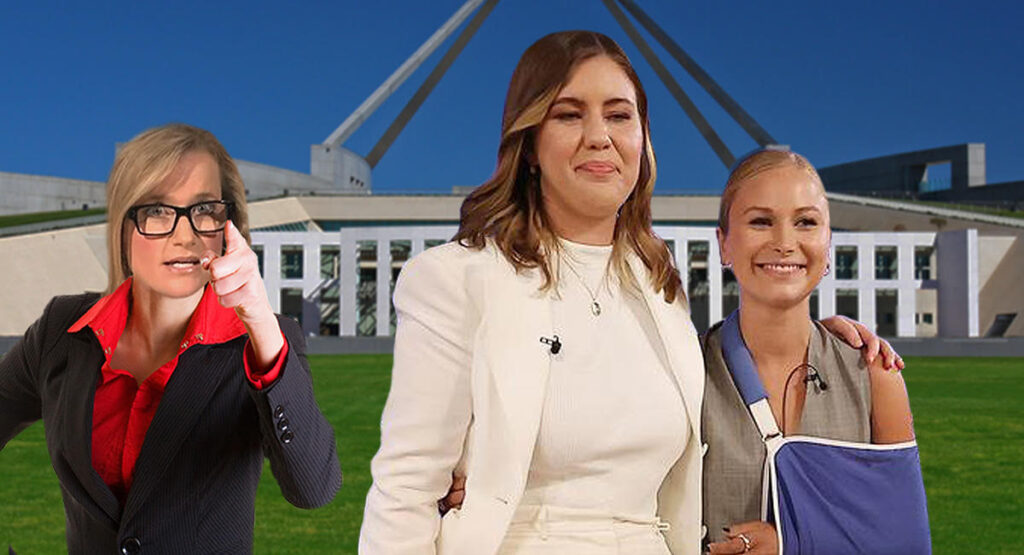 It was Madeleine Albright who said “There’s a special place in hell for women who don’t help other women”. It’s not a view to which I uncritically subscribe.  There are many women whose awfulness warrants opprobrium irrespective of their gender – witness the Coalition front bench – but there is a certain type of woman who takes her woman-bashing cause so seriously, for whom each tiny increment of female advancement seems both a personal affront and threat to civilisation, that her special place in hell surely awaits.

I give you The Australian’s Janet Albrechtsen.

Since the #MeToo movement ended the presumption of male impunity to the consequences of sexual abuse, violence and harassment, there is no woman that has dared to raise her head above the patriarchal parapet that Janet has not sought to slap down. Week after week after punishing week, her column in The Australian rails against the movement and its female heroes in rhetoric she likes to claim as “calm and thoughtful”. Her confidence that #MeToo campaigners just need to learn to slap away the odd wandering hand is unshakeable.

In Janet’s day, women knew how to handle “oafish male behaviour”.  And they certainly didn’t vengefully describe “unmatched affections” as bullying or abuse, as Rachelle Miller apparently did, irrespective that Ms Miller’s $650,000 payout from the Department of Finance suggests this was no case of “unrequited love”, as Janet coyly asserted. In this “dour, dull and uptight era”, the “modern puritans” await, fingers poised over keyboards, ready to unleash the Twitter lynch mobs, and the reputations of “innocent men” are in the balance.

“Only a courtroom can properly test the evidence” of male wrongdoing, she asserts, extolling the virtue of the courtroom’s “cool reason”, and without a court’s conviction, she insists, there can have been no wrongdoing. But have we not spent the last decade seeing again and again how our courtrooms fail to deliver justice for survivors of sexual assault, in those limited cases that get there in the first place? Are not the mind-numbing statistics well known? That the chances of a conviction in the case of sexual assault are so vanishingly small that, more often than not, the perpetrator will get away with it? So we have effectively decriminalised sexual assault? In Janet’s world this means that, despite Janet’s championing the right to free speech in every other forum, a woman is forever forbidden from speaking of her own lived experience, as a man’s right to an untarnished reputation trumps all.

It was the asserted “cool reason” of the courtroom that Louise Milligan critiqued in her speech to the ACT Women Lawyers’ Association on October 21, a speech that drew heavily on her award-winning book, Witness, a book born of her own experience as a witness in a sexual assault case, and for which she spoke at length to a diverse range of lawyers, academics, judicial officers, witnesses and complainants about their experience of the criminal justice system. The problems of the criminal justice system Milligan outlined in the book and in her speech were articulated powerfully and in detail and, if scarcely new, demonstrated again the way the system retraumatises those who turn to it for justice.

How dare she, cried Janet.

Without having read the speech, Janet spent the week after its delivery railing against Milligan in the pages of The Australian, asserting that it visited “public humiliation” on some poor lawyers as they tried to eat their beef or chicken, leaving them in tears even whilst, she grudgingly conceded, others applauded enthusiastically. Leaving aside the breathless hyperbole of an asserted “hollowing out of the (legal) profession”, and the hilarious hypocrisy of her outraged sympathy for a few disgruntled lawyers at a fancy dinner when others are called “snowflakes” for taking less offence at much more, and the fact that Janet indisputably misrepresented the content of the speech itself, as Jonathan Holmes documents so forensically in his excellent article for ABC Alumni, Muzzling Milligan, does Janet really believe the criminal justice system operates so effectively in sexual assault cases that it is beyond criticism?  Or just that it should not be criticised in front of a room of professionals whose job is working within it and who might therefore be in a position to do something about it?

Milligan has been a target of Janet’s since her reporting of the allegations of rape against Christian Porter, another occasion on which Janet slipped slyly from the opinion pages to the news sections by putting the boot into women. In that instance, Janet mined the pages of the diary of my friend Kate to portray the clinical trauma Kate alleged to be caused by an historic assault at the hands of Porter as a reason to dismiss her allegations in the first place.  Look!, she asserted gleefully, spraying Kate’s most personal words across the pages of the national broadsheet. Kate was crazy! And dead! And as, Janet claimed fictitiously, her death means there is “not a scintilla of admissible evidence corroborating her claims” and the cool reason of the courts therefore can’t be applied, we should all shut up and leave those invaluable male reputations alone.

Who else should shut up, according to Janet? None other than the 2021 Australian of the Year Grace Tame. Despite receiving the award for her advocacy of survivors of sexual abuse, Janet found Ms Tame’s savvy use of the platform the award provided her to be “dividing the country” and resorting to “dirty partisan politics”. Janet’s analysis – yet again self-described as “cool-headed and careful” – was that Grace was undermining her unique position by criticising a Government that was universally thought to be unforgivably, inexplicably weak on gender issues even when dealing with sexual misconduct in the parliament itself. Grace should read more, opined Janet, and she – like the “patently silly” Greta Thunberg – should not let herself be exploited by others to join marauding mobs.

And then we come to this week’s pièce de résistance after the collapse of the prosecution of Bruce Lehrmann. When Australia’s favourite police force wanted to distract from their latest bout of shitfuckery, to which reliable writer did they turn? News was breaking that the Australian Federal Police had illegally sent highly sensitive material received from complainant Brittany Higgins to Lehrmann’s defence team – inconsequential things like Ms Higgins’ psychological counselling notes and the videotaped record of her interviews with police.  How careless. Faced with the welter of bad publicity that would flow from such an extraordinary lapse of ethics or competence or both, what a shock that the private diary entries of officers from the very same investigative unit responsible for handing over the case’s most sensitive files to Ms Higgins’ alleged rapist found their way to Janet, a unit that has now been accused by the ACT Chief Prosecutor of “inappropriate interference” in Ms Higgins’ case and being “clearly aligned with the successful defence of this matter”.

As Brittany Higgins lay traumatised in hospital after hopes for a legal resolution to the case lay in tatters due – let us recall – to misconduct by a juror, Janet featured once again on the front page of the Oz, drawing on these diaries to echo the AFP’s allegedly politicised position and decry the decision to prosecute Bruce Lehrmann in the first place. Deploying trope after trope, cliché after cliché of what makes a rape complainant the right kind of victim, representing Ms Higgins’ actions in a way the ACT Chief Prosecutor asserts is “not supported by the tested evidence at trial”, Janet expressed sympathy for the accused, hostility to the ACT Chief Prosecutor, and, ironically enough, queried whether there had been “political interference” in the case.  She also questioned whether the publicity surrounding the case meant that Lehrmann could never have received a fair trial in the first place. “#MeToo media trials will continue to threaten a fair trial”, she asserted, blithely ignoring the fact that Lerhmann’s capacity to receive a fair trial amid fervid media interest was explicitly tested in one of her cool and reasoned courtrooms and ACT Chief Justice Lucy McCallum found that he could.

The #MeToo movement began as a hashtag of solidarity to render visible just how widespread is the scourge of sexual assault. It continues to  exist because too often there is no viable avenue for women to seek justice for great harms visited upon them by predatory men, including men who deploy every legal tool possible to ensure they get away scot-free. Janet shows us just how completely she misses every point imaginable in her column each week, prioritising the reputations of these endless “innocent men” over the crushed aspirations and bodies of their accusers.

My partner and I play a fun game taking turns to guess whether Janet’s columns will contain a takedown of a woman or the Voice to Parliament – we split the points if it’s both. Reading it is optional but not recommended – guaranteed you could recite it by heart either way.

Australia, when do disabled people get a ‘fair go’?
Help us bring you the good news
Our writers can't be paid in exposure, but they sure can die from it. So if you like the stories on The Shot and would like to become a supporter, we'd welcome the money. Just $1 a month is enough for us to keep publishing stories.
Support The Shot
Sick of this notice? Click here to never see this bar again.
Do NOT follow this link or you will be banned from the site!