General News
Keep your hands off your election, Australia
April 26, 2022 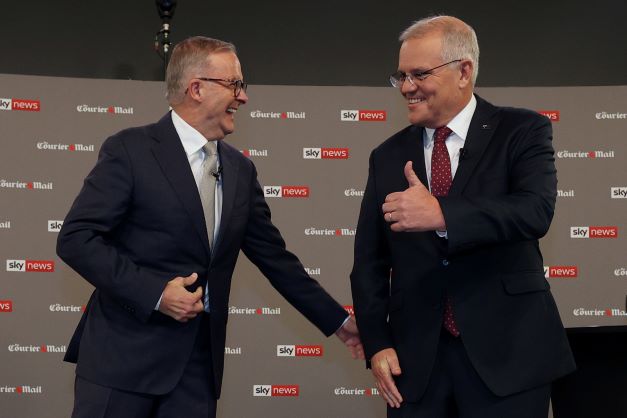 Pat yourselves on the back ‘Straya. You’ve made it this far. Almost three weeks of the Three Ringed Travelling Election Showdown and Scott hasn’t fallen into his own moral vacuum and Albanese hasn’t asphyxiated in a puddle of his own gaffes – not for the press gallery’s lack of trying. The gaffe that is, not the asphyxiation. That part comes later.

For weeks, months, feels like decades, the media has sat panting to break through the wire; yelping greyhounds cooped up in the starting box as Scotty whirred around and around the track with his election rabbit lair, every weekly pass teasing the barkers to apoplexy until they almost scratched their own faces off.

For the rest of us, it wasn’t so much when would the media know Scott called the election but rather when would they shut up about it.

But come April 10, oh the frisson! The sweet release from all that salivating as Scott drove to see what’s-his-name and the hula-hooper at Yarralumla while Speersy had us on the edge of our lap rugs with excitement as views of a Canberra road and the back of Scott’s head kept two people back in the studio and a passing jogger in a state of catatonic excitement.

Things got off to a dodgy curry start when only a week before, a Newcastle pensioner had invited Scott to go fuck himself because he was sick of his bullshit (allegedly) and he’d already had a go to get a go (allegedly), leaving Scott wondering who exactly the old fella was talking to given Scott had never met a real disability pensioner in his life because that’s Anne Ruston’s job, not his. He doesn’t hold a pissed pensioner.

It got worse when Scott got caught out entertaining the election campaign media in a private soirée that had the punters crying foul while the press gallery poured boiling oil down from the castle turrets, screaming how exhausting it all was (are you listening Lismore?) and how none of you ungodly punters understand how-it-all-works you elderberry smelling hamsters.

The only problem was, when asked by the punters specifically how-it-all-works they came over all gun-shy, circled their high-viz press tour jackets and went back to taunting Albanese again by firing starter-gun questions at his unsuspecting head. Think rolling marbles under a police horse’s hooves but with less chance of getting arrested.

This was of course all a follow on from The Gaffe, which Australians were told by a media still pouring hyperbole down at the peasants from up in the turrets, was something so drastically important it may have changed – gasp – the direction of the election, Speersy.

Because we all know if there’s one thing Australians in the pubs and school mum queues across the country base their votes on, it’s a 30 second question from a journo at a Monday morning presser. But oh, The Gaffe, The Gaffe! Why wouldn’t it go away, the media asked themselves as the media kept picking the shit-stained, dunny roll gaffe up and tucking it back into Albanese’s shoe.

Never mind Australia, a good dose of transgender tormenting was on its way, courtesy of Scott’s hand-picked terf and serf from Warringah. She has a right to delete her social media history and protect the women people said Scott who’d been busily sewing himself a new Scotty The Feminist cape out of the discarded skins of all the women he’s treated like second class citizens for the past 14 years.

When will he dump Ms Deves as a candidate for Warringah? the media wondered, ignoring that fact that Scott hadn’t put the candidate there to win Warringah but to win the culture wars he needs to flame-throw at all the electorates he thinks he’ll win using transgender people as human ammunition.

It’s not pretty, but nothing Scott does is pretty. Everybody and everything is there for the scalping and if it doesn’t suit, thrown in the dumpster. If the Save-The-Women-From-Trans-Women-Sport’s sub-sub-niche issue shows up in Scott’s polling next week as a shit pile, he’ll spit it out faster than a drag queen with a sequin stuck in her teeth.

Sometimes Scott likes to season an issue, looking for the sweet spot before feeding it into the waiting maw of the media machine. You see, Scott’s quite the taste-tester for a man with a one dish curry repertoire. He has a graze on anything he thinks might resonate with the electorate. He’s the bored business executive at a buffet, the one who doesn’t worry about paying the bill.

A nibble of moral panic here, a bite of Labor-Loves-China there, maybe a quick sprinkle of dog-whistling to the freedom crowd over there, but he understands what Australians want Mr Speaker and this election is about the economy, and he never said any of that anyway, what on earth are you talking about?

There’s no point trying to make sense of what Scott’s thinking or speaking, if you can call any of it that, especially at a campaign presser. He’s not there to answer the gallery’s questions. He’s not there for you either. He’s there to talk down the clock and show his pet quiet Australians how loud he can be on their behalf.

The press gallery trying to capture the essence of Morrison’s words might as well be waving insect nets in the air trying to catch his farts.

Confused? Wait until you see what he’s done to the country for the last three and a half years, and while you’re remembering all of this, for some balance, don’t forget Anthony Albanese once missed a question at a presser.

Despite Scott Morrison ignoring Australia burning while he flew to Hawaii at Jen’s magisterial insistence, and forgetting to order vaccines in time, and shoving Covid responsibility onto the states and Greg Hunt under the bus, and ignoring people drowning in floods while his own Cabinet ministers pretended we didn’t have a defence force, and leaving Australia with a $5.5 billion debt to France because nobody knew how to read the exit clause in a contract, and leaving aged care homes with minimal funding so elderly people died with covid or sat ignored in their own piss – the media would like you to know that none of that matters any more now the election train has left the station. And by the way sir, did we tell you Anthony Albanese once missed a question at a presser?

So let’s turn our heads back and focus on the horse race again and even more important things like who might get a Walkley, because now Albanese has the spicy cough, the press gallery will have to take turns at another bout of pub trivia with Jim Chalmers and Penny Wong and Richard and Tanya in some sort of unmatched battle of the wits, although I didn’t say which side was outgunned and who’d win the cutlery set from the door prize.

Will Australians hear about an anti-corruption commission? Will Barnaby appear from underneath the second last table at the Post Office hotel? Will it be the Teals for the steals? Will the voters ever get to read about climate change? Not if the Daily Telegraph and the Herald Sun and the Brissy Courier Mail can help it and besides, all that factual debate wouldn’t leave any space for Craig Kelly’s enormous head in the Clive Palmer ads that grease their oily palms.

If there’s nothing Australians have learned from this election campaign it’s because there’s been nothing to learn.

If you’d been like that north coast strategist advising the Liberal party and flown into Australia in the last few weeks, you’d probably think our Prime Minister was a lost tradie with bad hair plugs running up against a field of nobodies who’s only saving grace is they’re ignored by the press pack for a photo of the PM burning his eyeballs in a welding accident.

But on with the race Speersy. Never mind the analysis, never mind what the punters want to know, they’re coming down the middle of the straight and the only question no Australian cares about but the press gallery keep asking anyway is – who won the election week? Yes, who won? they clap. Who won?

Nobody wins election week in the stunt-burnt country. But if anybody has lost, it is us.