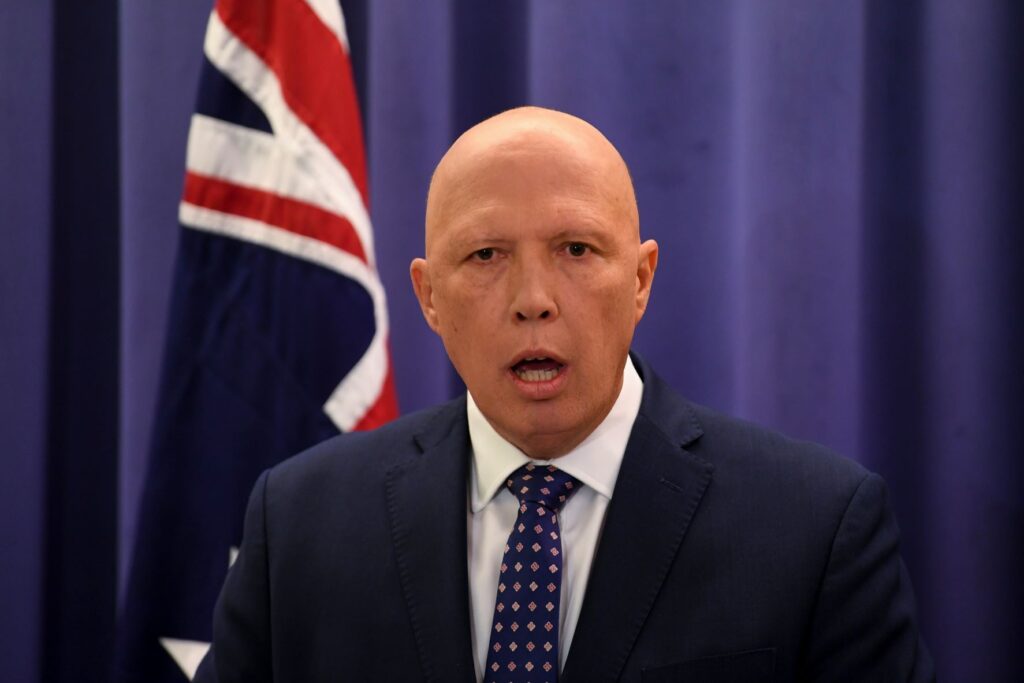 In the days following the Liberal Party’s defeat at the recent federal election (a sentence I typed ten times just to savour the feeling), political chatter turned immediately to who would lead the party out of the darkness from the humiliating public flogging they’d just received. Nineteen seats they lost, dear reader, nineteen, not that I’m skiting.

Propped up by a widely loathed Prime Minister in Scott Morrison with a Cabinet of incompetents and missing-in-action ministers, (has Alan Tudge been sighted yet?) the question was not so much would Scott Morrison resign as leader, but how quickly would a new leader slip into Morrison’s freshly warm seat, still covered in the mould of his vainglorious delusions?

Josh Frydenberg had last been seen on election night staring frog-eyed and blinking into the television cameras – which to be fair, was nothing out of the ordinary – as he refused to concede defeat even as his billboards were being stripped down and his conqueror Monique Ryan changed her twitter bio to Member Elect for Kooyong.

Regardless of his desperate attempts not to let go of his dearly cherished title as the Honourable Member for Kooyong, Frydenberg was done. Over. Cooked. It’s very hard to run as leader of the parliamentary Liberal Party when you’re no longer a member of the parliamentary Liberal Party, which is a terrible shame for Josh, (not really) but perhaps he should have kept his eye on his seat and not his own naked ambitions.

Come post-election morning, without Frydenberg in the picture and without many Liberal politicians in the party room at all, (nineteen of them remember, yes very sad) came the Liberal Party’s moment to review, to reorganise, a chance to reset. A true leader was needed, one that could help lead the party past 2022 and into the future. A leader with intelligence, vision, tenacity and above all, public popularity and appeal.

Dutton had been sitting for years like a snorting, frustrated stallion ready to leap through the fence. Robbed of his chance at greatness by Scott Morrison himself, it was only a matter of waiting for his enemies to float past him and the Liberal leadership would be his. With a deflated party room around him, Dutton wasted no time in setting the agenda.

But here’s the thing about agenda setting when you’re a shiny new party leader – you need to do it very carefully.

The first words out of your mouth will be the ones that signal where the Liberal Party is going and how it intends to re-shape itself. Think of it as something along the lines of launching Coke Zero. It’s the same brand, but with a slight difference. It needs to be launched carefully and the ideas around it need to be thought through diligently. Branding takes finesse.

The general communications idea in the very early days of a political party that’s attempting to relaunch itself, is to tread carefully, take small steps and issue large, vague, feel-good statements that don’t barricade you into a corner. You’ll need that room to manoeuvre into places you want to go to further down the track. Don’t wedge yourself in too tight.

The Liberal Party 2:0 also announced they’d be reviewing the May election result and looking at where they went wrong, (I could probably write that for them but I suspect they wouldn’t pay me to write, “Climate change is real, Scott Morrison is a delusional loose cannon and most of you were corrupt. Thanks, bye.”)

Armed with the broad aim of setting a bold new agenda and taking cautious steps in the early days as the new opposition, what did our glorious new leader of the Liberal Party do in his first interview one week out from an ignominious defeat?

“Well Andrew,” Dutton droned in his monotone staccato to a slathering Andrew Bolt, “it’s I, err I mean if it was limited to just to environmental issues or just to climate change ahh, then it would be, aah bad enough, err, extremism of some the teachers and the language that they use . . . the national curriculum, the values argument is going to be one of the big debates over this parliament . . . We can talk all night about what is happening in our schools . . .”

What was it that caused the great Liberal Party loss of 2022, you ask? Lack of integrity in government? Obscene wastage of taxpayer’s money? The treatment of women in politics? Corruption? The incessant bullshitting of Scott Morrison? Inability to tackle the greatest global issue of our times, climate change? Nope. It was Mrs Maretti’s Year 7 history classes.

No mention of the Liberal Party seeking to listen to the Australian electorate. No mention of listening to anybody. No humility. No regrets. No setting an agenda with caution and allowing room to move later on. No intelligent, thoughtful steps forward. Nothing.

Peter Dutton lurched around like Barnaby at closing time, barging straight into a narrow, electorally irrelevant topic imported directly from the US Republican playbook. This mantra was repeated a few weeks later by a hyperventilating Sen. Hollie Hughes who told a questioner at the Sydney Institute who asked where the Liberal Party had gone wrong, that essentially it was all the fault of the “Marxist school teachers”.

This is not only demonstrably stupid politics, it is also stupid branding, (it is also frankly just stupid). Shoving fake labels that don’t belong and don’t fit onto an Australian product has never worked, just ask Starbucks. Scott Morrison tried something similar with his manufactured outrage over trans women in sports. The issue had been a lightning rod in the USA, especially in the south and mid-west where the hysterical Christian culture wars run deep.

Australia is a very different society to the US. We are more city-located, we have far more egalitarian views on people being left to live their own lives, we are far less religious, and our voting system is compulsory so we don’t need to agitate and electrify the adult population to force them out to vote.

In addition, the US conservatives run a very nasty little line in opposing everything and anything, regardless of whether it is good for the nation or not. Peter Dutton has expressed similar views recently claiming the sole aim of his job is to “oppose the government”.

Once you’ve decided your own glory, your own win-at-all-costs culture, your narrow insider agendas are far more important than representing the will of the people, ultimately the result will be a political party that has no interest in serving the people.

If the federal Liberal Party have collectively decided they want to be replicants of angry American conservatives, that they want to reinvent themselves as culture war mongers in blue suits intent on appealing to the outer suburbs and religious niche nuts, if they want to ignore what the Australian electorate told them very loudly at this election – that climate change is important and so is integrity – if they want to spend the next decade in political Never Never Land, then in Peter Dutton they could not have picked a more perfect person for the job.