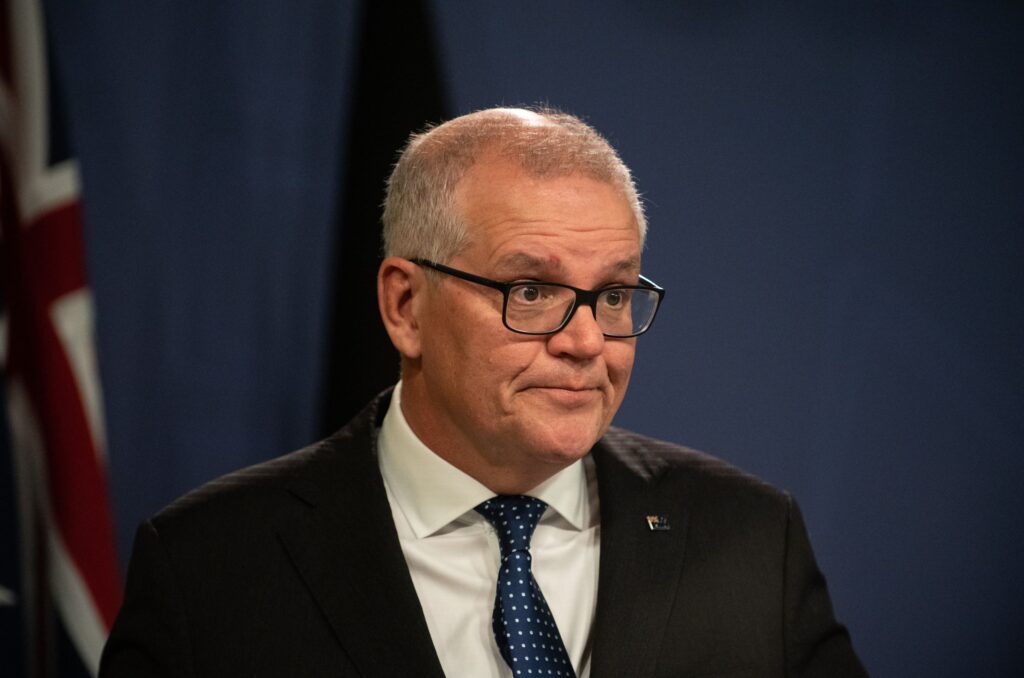 It all started innocently enough – Scott Morrison’s current crisis that is, not the pandemic. Scott Morrison’s good friend and Murdoch employee Simon Benson had co-written a book on Scott’s heroic adventures and awe-inspiring feats during covid. Murdoch’s Australian, never one to resist a marketing tie-in or a chance to promote the Howard-Menzies party, last week published a breathlessly parodic piece for the book disguised as, well, a news article. Sounds predictable enough.

In both the book (titled Plagued, in an unintentional act of nominative determinism) and the Australian article, Scott Morrison is of course portrayed in the central role that has always suited him best – Scotty the Saviour. The book itself was clearly written with both Morrison’s input and complete support, if not his proactive campaigning to authors Benson and Geoff Chambers to have the record set straight about what he presumably saw as his unrecognised superhuman sacrifices to save Australia from itself.

We, the ungrateful, ungracious and undeserving clearly needed to be told how Scott Morrison had once spent an entire evening with Josh Frydenberg by the fire (that Scott had lit) at the Lodge eating curry (that Scott had cooked) while they slaved away over the issue of how to hand over taxpayer funds (that Scott had thought up!) to corporations like Qantas and Star Casino without any strings attached while their executives awarded themselves millions of dollars in bonuses. Apparently, none of us have truly thanked Scott for it but Australians are a thankless lot like that.

But what began as a sordid tome of hagiographic revisionism very soon turned into another sordid tale altogether – and not one Scotty the Saviour saw coming.

Suddenly Australians, including members of his own government, discovered that Scott Morrison had, without the consent of his Cabinet or the Federal Executive Council, sworn himself in as both the Minister for Health and the Minister for Finance in March 2020. And worse, to add to his ministerial hoarding collection, Scott had also secretly anointed himself Minister for Industry, and Energy and Resources, and Minister for Home Affairs, and even the federal Treasurer – actions he later claimed on radio 2GB he couldn’t quite remember because, of course, why would you? How could Scott remember being sworn in as the federal Treasurer when he had a burning cross to keep climbing down from?

To the collective gasps of many, including Australia’s political media, there appeared to be some sort of disbelief that Scott Morrison had turned out to be a secretive, power-hungry inveterate liar. For those of us who watched Morrison closely over the years, the revelation wasn’t that much of a shock at all, but even we didn’t have the clandestine seizure of federal executive power on our bingo cards.

And here’s another point to remember – Scott Morrison, who never does anything relating to his image without some very deliberate thought, actually provided this information to the writers of the book in the belief that this would show him in a magnificent glowing light. Such is the self-belief of the former Mayor of Australia, that he truly thought he could offer up the fact he’d secretly subverted Australia’s Westminster system of government and we would all be overjoyed with gratitude. My God you’re an ungrateful lot.

The reaction from Australians and the media was much like the shock after a collective car accident; a moment of stunned silence, followed by the sinking realisation of what had just happened, then a simmering growing anger at the act perpetrated on us all.

Suddenly Scotty the Saviour was in damage control. There was no word from him at all to begin with, then a few Scotty The Victim stories started to drip out about Scott enduring insomnia during the worst of the covid crisis and having to sedate himself, which frankly would be hard to differentiate from his day-to-day performance in the PM’s job anyway. You knew things were heating up when Scott found himself ringing in to his favourite mate-mate-cough-spit-footy-boots radio station 2GB, where he told a happy little Ben Fordham that the whole thing had been for the good of Australia. Did I mention you lot are ungrateful?

What appears to have gone on inside his head, and one can only peer into that dangerous chasm so far, is that he thought the “greatest emergency in Australia since World War II” necessitated him saving Australia’s federal cabinet from itself – single-handedly. Like a lumpy knight on an unsteady steed, Scotty the Saviour came charging in waving his lance-of-vanity about to save a Cabinet of highly credentialed and experienced federal politicians from themselves and Australians from their own democracy.

What if the Health Minister fell ill, he cried? What would they do then? Presumably, the government would do what every other government has done since Federation and replace the unwell Minister with another, a task that would take a few moments and would not exceed even Scott Morrison’s modest capabilities.

And why ignore accepted risk management practices of spreading the risk around, by concentrating all the emergency responses and power into one man? Scott’s delusions clearly extended to him believing that every other government minister except him would fall ill to covid. No wonder he was in such a rush to be first in the vaccine queue. Moreover, if it was such a brilliant scheme of risk management designed to save the federal Cabinet from certain ruin, why keep the whole thing secret from them – and us? Why did Scott Morrison, the man who never missed a photo or a headline he couldn’t insert himself into, why did he suddenly hide all his ministerial lights under a bushel?

Of course, the excuse that he was worried about all this sudden mass illness inside his own Cabinet does not pass any rational person’s thinking, largely because, besides the Health and Finance portfolios, the other ministries were self-anointed during 2021, by which time the covid emergency had settled a tad. And why not anoint himself the Minister for Aged Care or the Minister for Women, why did he only want his hands on the portfolios with sole ministerial power and discretion? Somebody make it make sense, because certainly Scott hasn’t.

Former lawyer David Ritter, now CEO of Greenpeace Australia Pacific, this week said: “Morrison and Co were a wrecking crew who actively trashed expectations of government. The sheer bizarreness of this week’s revelations suggests a dismal lack of respect for the conventions and institutions of the Australian form of democracy, and for the people of this country who rely on them.”

There is a lot to be said in this scandal for Morrison’s previous form in thumbing his nose at the responsibilities of government and trashing existing conventions, including his bizarre behaviour during the Black Summer bushfires (Waikiki anyone?) the Lismore floods and his belief expressed during his audition sermon last month that governments are not to be trusted. In hindsight, he was clearly talking about himself.

The other touchy aspect in this scandal is the detached compliance of our Governor General who appeared to be not too bothered about the repeated “swearing in” of his acquaintance Scott Morrison into numerous ministerial positions over a 14-month period without another minister present and with none of this being made public; until the excrement hit the fan this week, and then suddenly he found himself very much bothered indeed.

According to his media statements, the GG appears to have been both present, but yet, not at all involved. Oh yes he signed things, but that was, he says on the advice of “the government”, until we discovered that Scott Morrison was the only person party to these one-sheet-of-paper-instruments of self-appointed power grabbing. The Governor General appears to have forgotten the Prime Minister alone is not “the government” – only in Scott Morrison’s head does this fantasy exist.

Australia’s democracy has been so successful because it has relied on the good will of the custodians of the system that they will act accordingly. They didn’t. Democracy is a fragile beast. All sides have to respect it for it to work. If that trust is not respected, that’s where our systems break down. Beyond the notion that Scott Morrison was happy to go to an election and possibly another term of government while secretly holding shadow executive powers, lies very dangerous territory indeed.

To add insult to high farce, Scott Morrison also came out at his own press conference where, apart from bleating for almost an hour about tempests and ships at sea and how he’d been up there on the cross for us thanks very much you thankless bastards, he offered a singular apology to his fellow government colleagues. Yes, his mea-not-really-culpa was just to them.

Here’s the thing about Australia’s democratic system of government. It is ours, not theirs. It belongs to all Australians, not the members of the Cabinet or the government of the day – it is our democracy.