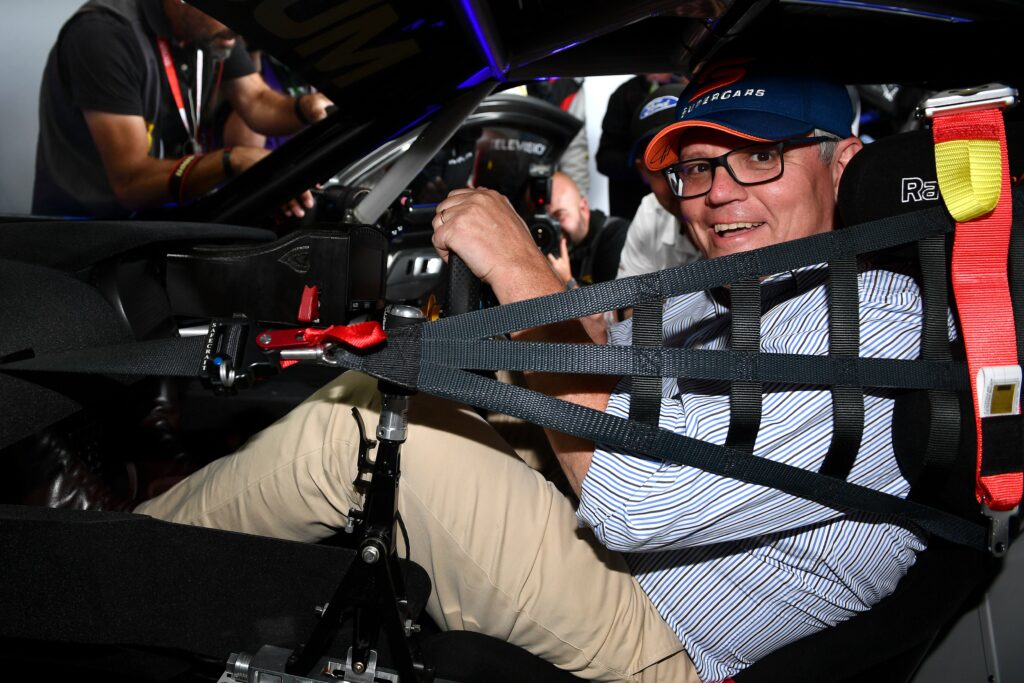 Somewhere in the bowels of the internet there’s a long-forgotten Flickr account featuring a boring man in a Mensland suit standing in familiar locations, sort of like a ‘90s man-doll stuck inside a mini-Australian snow globe. Our boring man poses among other men in boring suits, breaking the golden rule of politicians everywhere –  never wear anything that could have you mistaken for the wallpaper.

Set up in 2009, the bland ‘90s man Flickr account has long been abandoned because that’s what the owner of it does, creates a moment for attention and then – walks away. Nothing more needs to be added to this captured world because it has served its purpose. Why bother dealing with it again?

The owner of this Flickr account is of course the Prime Minister. Scott Morrison has probably forgotten the thing exists because why wouldn’t he? For Morrison, just like a vacuous policy announcement, there is nothing to be gained from tending to anything that no longer serves a purpose. 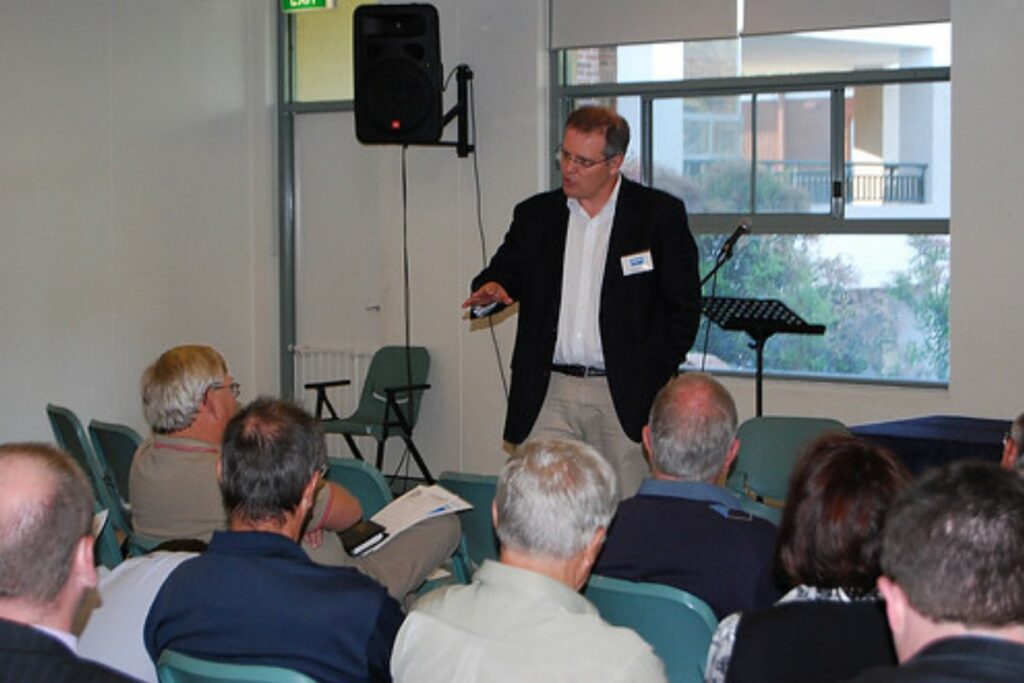 In Sean Kelly’s recently released book on Scott Morrison, The Game, Kelly throws a forensic magnifying glass over his subject, not quite pulling the wings off Morrison, but sticking pins through his subject’s head with glee nonetheless.

Let’s get it out of the way – Scott Morrison has always been a craven opportunist, ready to say or do whatever is required in the moment to convince Australians he’s saying whatever they want to hear. He swallows surveys and polls and regurgitates them back into the gaping mouths of the Australian public who have little idea they’re being force-fed their very own opinions.

Anybody who follows Australian politics already knows Morrison is a conning chameleon and anybody who saw Morrison’s rival for pre-selection in Cook jettisoned out into the sea like used crab bait by Morrison’s mates at The Daily Telegraph has already seen him in action.

However, Morrison is smart enough to know what he’s not smart at. And for that he surrounds himself with people who are very good at what they do, which is political uber-marketing. This might tell you something about the calibre of the man, that the Australian Prime Minister’s office is largely filled with media advisers, videographers, communications manipulators and political strategists and very light on anything like, say, experts in French diplomacy

So, let’s imagine you’re an entrepreneur about to launch a new brand of soft drink called Showmo onto the market. One of the first things you’ll need to do is get people to actually buy Showmo, and to do that in a crowded market full of similar soft drinks, you’ll have to add human emotion to it to make it stand out from all the others. That is, how it makes people feel or react when they see the brand, Showmo.

To achieve that, you work out the core emotional selling points that relate to Showmo, usually no more than four or five. These aren’t necessarily the most obvious features of Showmo, like it’s well priced or it’s raspberry flavoured. These are the parts of the product that connect to people’s feelings, things the customer can relate to. Think of it as how you want the customer to feel before or after they’ve bought it.

We don’t want to use more than four or so emotional connectors with our brand because the human mind works better when it absorbs small grabs of information on repeat.

Now, if we keep talking about and thinking about and using those four main emotional points, if we repeat one and then repeat the next one and then repeat the next until we get back to the beginning, then start again, eventually over time, our four main emotional connectors for Showmo will sink deep into your psyche. Sound familiar?

Think of it like a cube with only four sides on rotation – blue, red, green, yellow. Then around we go again, except in this case we want you to think of Showmo’s four rotational sides as – Strong – Sympathetic – Suburban – Saviour-like.

If you watch Scott Morrison’s supervised projecting room in his Facebook page, and his cultist headquarters on Instagram you’ll see this same branding and image rotation in action.

Suburban Scott cooks the curry and Sympathetic Scott clutches some poor unfortunate victim he believes needs the power of his healing hands. If you watch Scott Morrison control the daily news cycle, you’ll see his team twist the same turns of that cube except they use policy and announcements to project that subliminal emotional manipulation.

But Scott Morrison hasn’t always had his favourite four or more sides on repeat play. Prior to his elevation to Treasurer in 2015, Morrison played a bland old melody. Even after boldly disgracing himself as the Immigration Minister who attacked his own government for paying for drowned refugees’ funerals, Morrison still hadn’t quite worked out a way to cut through into the Australian psyche. He was languishing on the shelves, his Showmo soft drink yet to be invented.

But suddenly in 2015, the new improved product emerged. Scott Morrison went from a rugby union supporter to a rugby league fan. And not just any fan, but an over-the-top caricature Shark’s fan, complete with bright dress-up hats and scarves and Go Sharks! pronouncements in every interview. Suburban Scott had found its mark.

Similarly, in a 2015 fairy floss interview with Neil Mitchell after Morrison became Treasurer, Scott Morrison suddenly introduced us to more Suburban Scott by telling us all how much he enjoyed cooking curry, something that had suddenly and miraculously only become an interest the same year he found himself as the Treasurer next most likely to become Prime Minister.

In the space of six months, Australia got Go Sharkies™️ and Look At My Curry™️ followed by the entirely fabricated, and created in a marketing workshop, nickname of Scomo™️, proving once again, that the thought deprived members of the Australian public, including our media, will obediently repeat anything Morrison serves up as long as it’s slathered in easy-to-digest sauce.

This is what so many who analyse the Prime Minister don’t see – Scott Morrison has turned himself and Australia’s prime ministership into a product; a cheap, bland, consume and throw away product. He’ll change the packaging and the wrapping and the contents to suit whatever the polls tell him. This month he’ll come with zero sugar, the following month he’ll forget that and add premium zing, but just like haemorrhoids, he keeps coming back more painful than ever.

And here’s the rub – the point of the breath of the salesman, the aim of the rotating imagery is to appeal to the disengaged, to the Australians in their millions who don’t follow politics and find it all a bit hard and confusing and Jesus, all of those politicians are bullshit artists and I hate it all, but oh yeah, Scott Morrison’s a real family man. He’s a good bloke. Loves a beer, cough-spit-footy-boots. Just like us.

They don’t know how they know it or why they know it but somehow that image of Scott Morrison, that feeling just seems to have miraculously sunk in. It works. And come 2022, It may even work again.

Except this time, it seems Australians have started to tire of the fetid flim-flam displays. Morrison’s slogans are increasingly shrill, his image rotation carousel just brings around a man who is less ordinary suburban, more smug and tired. Perhaps Australians are finally seeing the real Scott Morrison, the bland man in the grey suit back in the discarded Flickr account, somebody with nothing to say and nothing to offer except the packaging of his own self-serving image.