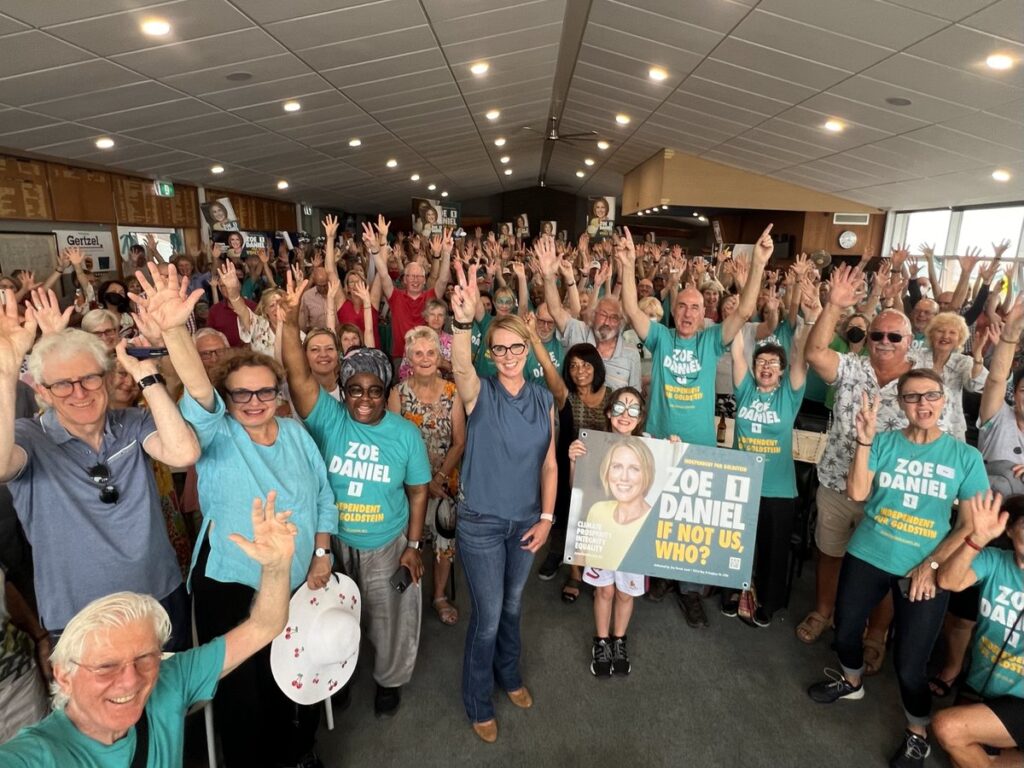 By now you must have seen them. If you haven’t, you’re probably not going to vote for them anyway or, you might just be part of Australia’s politically disengaged.

They’re almost invariably women; educated, articulate, middle class and yes, white. Their smiling faces and groups of eager volunteers determined to cover metropolitan and regional Australia in campaign corflutes, have been out there for months now in the election campaign that isn’t an election campaign, even if the Prime Minister has been busily rolling gnocchi and incinerating his retinas with a welding arc.

They’re the independent women candidates lining up to challenge the blokes at the rapidly approaching federal election. They’re to be found predominantly in Liberal or National Party held seats, and if the hysterical, throw-your-popcorn-in-the-air-and-terrify-the-dogs reaction of male coalition government MPs is anything to go by, these women have the Morrison Government deeply worried.

There are some who claim that it all began with Cathy McGowan and her success in Indi in 2013. Some say the rise of the independents – or Independents depending on whether you group them together as one collective entity (and that in itself is an unsettled question) – only began in earnest for the 2022 federal election.

Australia’s first independent politician, Alexander Paterson was elected in 1901 in Capricornia (2) on a platform of free trade and excluding Chinese people via the Immigration Restriction Bill; perversely the same issues that have seen another Queensland politician of his ilk elected in more recent times.

Since then, Australia has elected 48 independent candidates into federal parliament and a total of 153 independents into state and territory parliaments. The idea of a politician without allegiances to a political party is nothing new to the Australian electorate.

What appears to be new, however, is the method of how those independent candidates put themselves forward. The Voices Of political movement is behind many of the independent candidates coming forward at this federal election. The Voices Of ideology springs from the idea that community groups know best how to select their own local candidate and that the strongest chance of success for an independent comes from them growing deeply from the ground up – a concept that nature has inarguably proven already.

Most of the Voices Of political community groups around Australia utilise the Kitchen Table Conversations model which has been floating around as a model for political and civic engagement since at least the late 90s. Built up by Mary Crook of the Victorian Women’s Trust, the idea of sitting down in private homes and workshopping political concerns and ideas for change from local people was credited by some as an influence in the downfall of the Kennett government – although to be fair, Jeff Kennett himself probably had the most influence on his own demise.

What is noticeable, is that once local people themselves have grasped their political concerns into their own hands and bypassed the major political parties, they have ended up choosing women. Of note, among the previously mentioned 48 federal and 153 state and territory independents, is the fact that historically only 30 of that total of 201 independents have been women.

It seems that once the traditional male dominated structures of old school-tie and business and clubs and powerful connections and the game of mates is by-passed in favour of true merit based selection, it is the women who come to the fore.

It goes without saying that many of the men in federal parliament at the moment with their sitting day boozing, anti-vaxxing protests, Facebook stalking and prayer room cavorting would not have won or still have their parliamentary seats without the brand and connections a major party has brought them.

What can’t be overlooked is that the women selected by discerning, engaged, highly perceptive local groups who are only concerned for their community’s best outcomes, these women can not afford to behave as if the world belongs to them and owes them a favour. They have to be better than good.

What also can’t be overlooked is that these new independent women – dynamic, energised and intelligent though they are – are all of a certain ethnicity. They’re white. When several prominent women of colour were asked to comment on this obvious characteristic for this article, most of them were reluctant to comment publicly, not wanting to detract from the independent women candidates themselves. “I don’t want to harm their cause,” said one.

One told me she simply did not see herself reflected in any sort of women’s movement or politics in general in Australia and felt like an outsider. One commenter said with resignation that it was just the natural progression of empowerment that white women came forward first and that women of colour would then follow: “It’s always been that way.”

Former Labor candidate Stella Yee, an Asian Australian of Malay-Chinese descent said, “For 120 years it’s mainly been white males in power. It’s taken them 90 years to even embrace gender quotas. The powers that be will usually elevate their own kind. So the feeling is, if we must share power, we will give it to people similar to us.”

There have also been mumblings behind the scenes of corporate men profiting from these predominantly women-run independent candidate groups. The argument being run for their close involvement is that these groups need expert services and the men who are offering them are “the only ones available. Nobody else will do it.” This is always an argument mouthed by people who haven’t taken the time to search beyond their own well-known surroundings.

The more prominent independent’s campaigns are slick, professional and bear all the signs of being run by marketers with political experience on the board. There are group interviews with the more prominent candidates, cheery merchandise for sale, and a certain warm and pleasing similarity to their presentation and messaging. While the visual aspects of their marketing are eye-catching – and getting an independent’s face and name known and recognised is crucial in the brand-power world of political campaigning – there has been a distinct lack from many of these women of going for their opposition’s faults and flaws. A grab for the jugular.

Their style has been modelled almost universally on the Cathy McGowan for Indi campaign which sought to remain positive and issues-focused and take the politics out of politics. The only problem with that is that politics is about politics. It’s as impossible to take the politics out of politics as it is to take the pith out of an orange. It’s what the beast is all about, and overly concentrating messaging on positive imagery and feel-good wording is not the strongest way to convince the hard middle ground, the rusted-on and the unsure voters, to change their vote to yours.

But there is movement. Internal polling coming through from the funding body Climate 200 shows at least eight seats could be a chance for the independents in this election, with some coming so close they could turn the seats marginal for the first time in their history.

Nothing like the movement and hunger for non-party aligned politicians happening now has ever been seen in Australia’s political history.

More than anything, these independent women have their roots in community. They have grown and bloomed from the nurturing of their own local democracies, carefully, skillfully, slowly. Women grown from the seeds of discontent successfully outing a leader who has been rooting democracy for the past three years may indeed be the final irony.