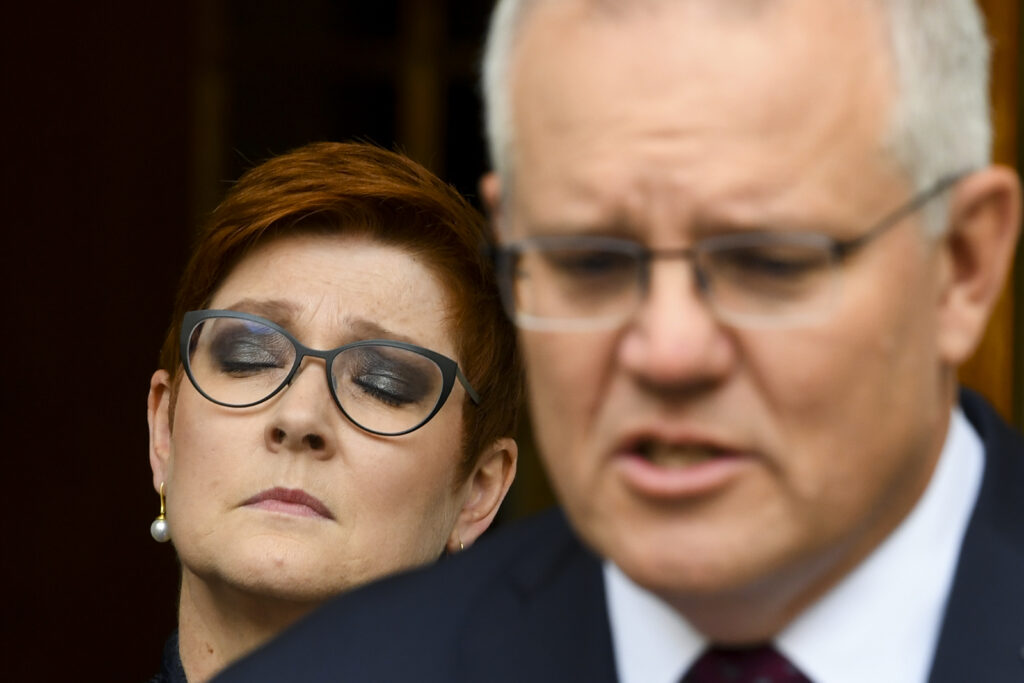 You might not know it, but our Prime Minister actually delivered a speech on International Women’s Day.  It didn’t receive a lot of attention, probably because it was offensive and there’s a soft blanket of protection from the media that Mr 64% enjoys at the moment. His nastiness doesn’t fit with his dumb uncle persona.

It was an unusual speech, not least because he rambled on about how the “government has to do their thing, absolutely, and that’s why the next national action plan against violence against women, these are the issues that we’re putting in place. The housing initiatives, there is a long list of them, the women’s economic security and Marise can quote them chapter and verse because she has designed them all.”

Apparently addressing women’s issues is a “long list” of things our Prime Minister could not be bothered specifying. Not even on International Women’s Day. He’ll get a woman to do that for him.

But Scott Morrison does have a solution for violence against women.  The Marketer-in-Chief announced a new $18 million ad campaign about respect: in effect outsourcing responsibility to us – the public.  More specifically, to women.

He kicked off this brilliant strategy with a tone deaf, inappropriate and dangerous commercial.

Have you watched?  Watch it now.

This government has spent millions of dollars reinforcing the idea women are required to police the actions of men.

WHAT THE ACTUAL FUCK?!

Yes I am yelling.  We all are.  Women are sick of being assigned responsibility for this problem.  We are tired, we are scared and too many of us a scarred from the ravages of domestic violence and sexual assault.

It would be lovely, and hear me out on this because I know it’s a pretty “out there” idea, if men were asked to start assuming responsibility for the actions of men.  Imagine that.

This commercial should have been a man telling his mate he’s messages are not on and to knock off the incessant texting.

But what really bothered me about this ad is it starts in the middle. 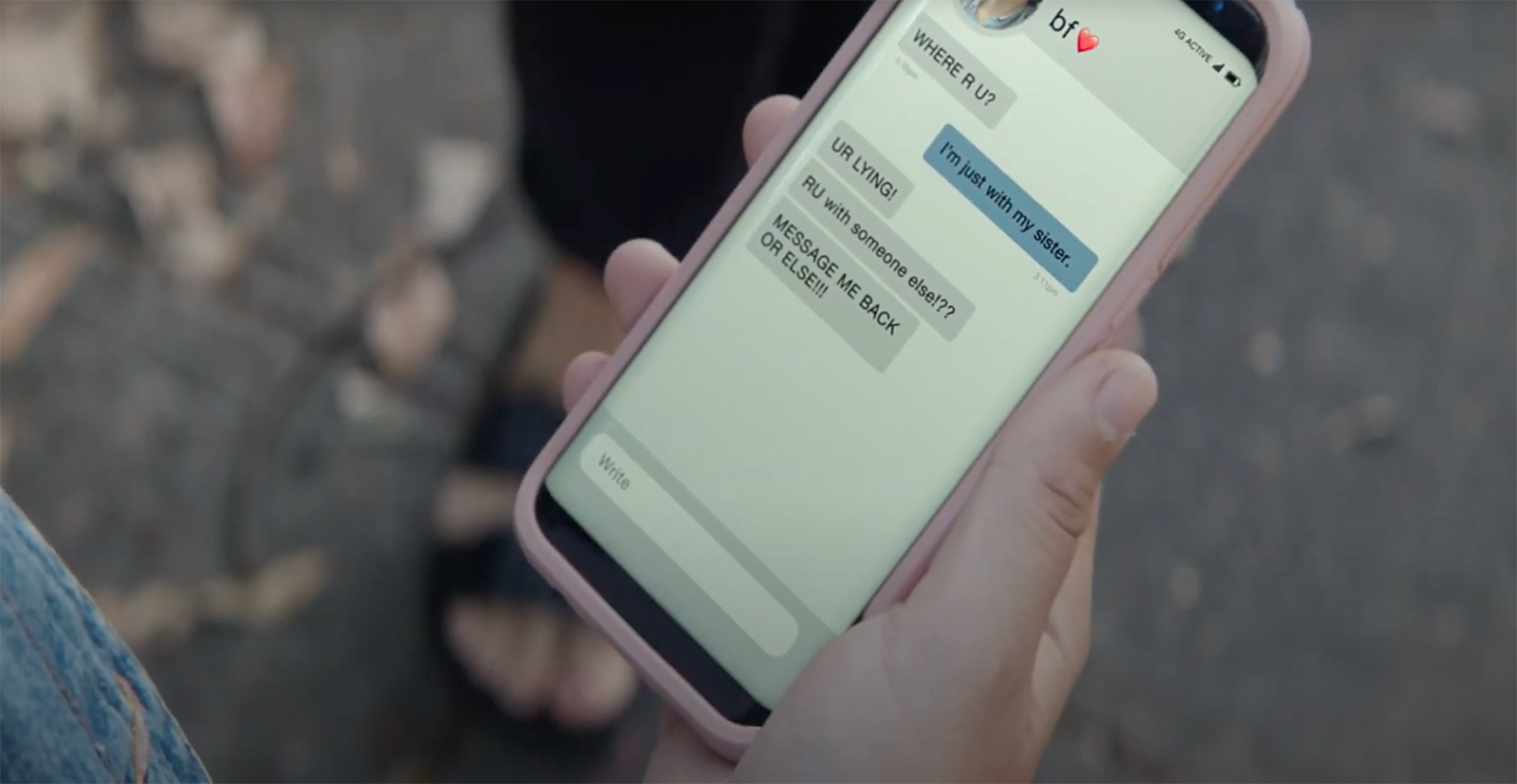 These text messages tell me this woman is already being beaten.  Regularly.

Her sisters reaction tells me this commercial has been created by someone that has no fucking idea what they are doing because if they did they would know ignoring messages like this can be dangerous.

What happens when this woman gets home?  I’ll tell you.  She gets at least one back-hander.  And she gets to apply more make-up to hide the new bruises that compliment the old bruises.

Because domestic violence doesn’t start in the middle.

Women today are bloody well aware of warning signs for relational violence.  We have to be.  Our lives depend on it.  But when it starts the signs are subtle and we have to make a decision.  Is this man needy or deadly?

We make this choice knowing society demands we give men the benefit of the doubt because “innocent until proven guilty” right.  By the time women realise they’re in a domestic violence relationship they’re groomed, full of shame and faced with a society that doesn’t understand you can’t just leave; unless you want to leave in a body bag.

Services that help women extract themselves from violence are woefully under resourced and many cogs in the wheel under value the danger.  Just like the police officer in Queensland that hacked a database for an abusive ex.  Or the judge that felt punishment of this crime was “excessive”.

To top it off this commercial aired the day over one hundred thousand citizens rallied around Australia protesting sexual violence in the #March4Justice.  Our Prime Minister responded by telling Parliament we’re lucky we’re not shot for standing up.  Then he got his team to shut down Question Time.  The next day he tried to blame us for taking his carefully crafted comments out of context.  How good is respect #ScottyFromMarketing?  How good is gaslighting!

“Australian women, Mr Speaker, must be fawningly grateful, Mr Speaker, that my govt, Mr Speaker, has managed to restrain itself, Mr Speaker, and not murder every last one of them in the streets today, Mr Speaker. We leave that to their boyfriends, husbands and strangers.” https://t.co/HsfDp9pgiF

What? At least here in Australia we don’t shoot our women? Is that the point he’s trying to make? https://t.co/vSuCMIBA5k

“So they are important actions that we’re taking as the Government to try and change some of the fundamental things that erode respect in our community. I want all Australians to be respected. Of course I want women to be respected, of course I do, because first and foremost, my fellow Australians, that’s what it’s about. A genuine respect for one another. And I fear that at the heart of this problem, that is something that we’re losing sight of. And how do you change that? Marise and I can’t introduce a law which requires people to respect one another. No government can do that. But communities can. Communities can change that. You can change that.

Today, we’re launching a campaign, $18 million, the third in a series of campaigns about protecting women from violence. And it focuses on this issue of appropriate respect that needs to be in place and understanding that from a lack of respect, it can end in violence. It doesn’t always. But it always starts there. That’s always where it starts. And so addressing this issue, I think, is really important. And these things can be very, very, very powerful. I remember watching an ad about alcohol and it was about a father who asked his son to go to and get him a beer. You remember that ad? Now, I saw that many, many years ago. I can assure you I have never, ever asked one of my kids to get me – I should go and get my own beer, one, which I do, on most occasions – but the same thing is true. It starts with just those simple things. And I think this latest campaign that we’re watching today really does challenge those notions. ‘You’re playing like a girl’ and the dad who has yelled that out from the sidelines gets called out, that’s not OK. It’s not OK, it’s not OK. And the challenging of these idea, are really important and that’s how you can fundamentally change what is happening, in lounge rooms, around kitchen tables, around cafe tables, at the sporting field. That’s where it really matters. That’s where attitudes are framed. And that’s where everybody is enlisted in achieving the change.

Governments should do what they should do. But, you know, as Liberals, I believe this fundamentally. You can’t ever contract away a citizen’s responsibility to the government. Government has to do their thing, absolutely, and that’s why the next national action plan against violence against women, these are the issues that we’re putting in place. The housing initiatives, there is a long list of them, the women’s economic security and Marise can quote them chapter and verse because she has designed them all. But, fundamentally,  what needs to change in the way we interact needs to take place in communities.

I’m very pleased to be here amongst you today. To empower you to keep empowering your community to achieve these changes. I’ll do what I can in our Government, everything I can. I am very committed to this. I’ll do what I can in my community, I’ll do what I can in my family and around my kitchen table and all of those sorts of things, as each of us need to do. But it isn’t just the Government’s problem, it’s all of our problem and it starts with, I think, really nurturing this notion of respect in our community. And if we can’t respect each other on any number of issues, then how can we expect respect to come for one particular group of people in our society. Respect is something that needs to be a big well that we draw from. And we need to fill this well up for all Australians. And I think if we can achieve that, then I think women in Australia can look forward to a better future. If we fail in that task, I am not as confident.”