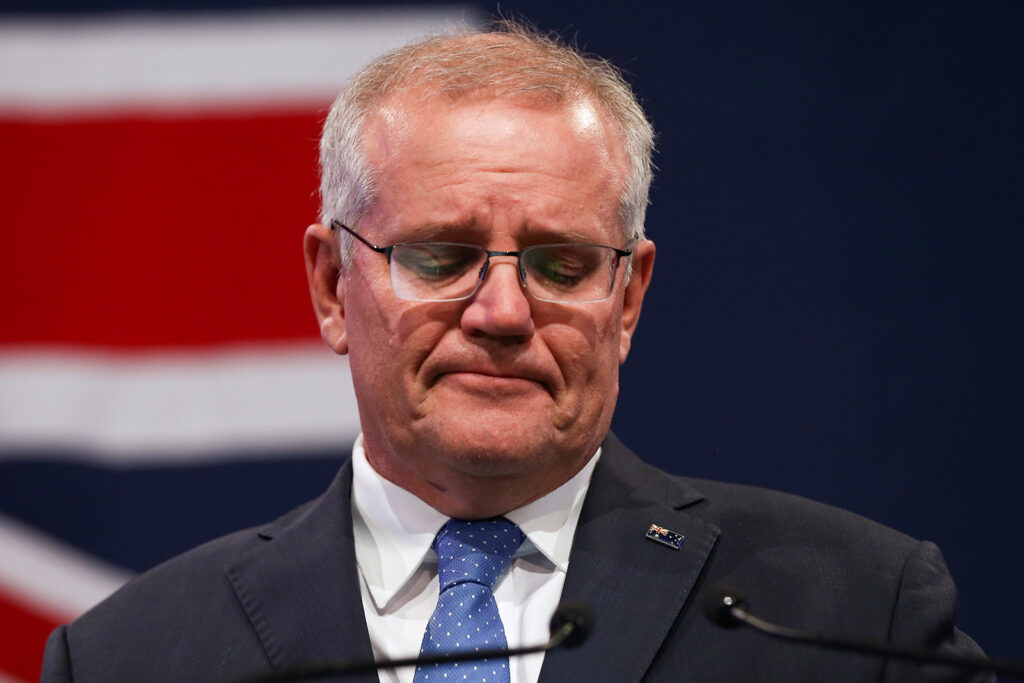 Scott Morrison is gone. Although he isn’t dead, something is gone all the same.

A greater fraud and malcontent never disgraced the mantle of Prime Minister. That he was disliked throughout Australia goes without saying. That he was despised as well is truly extraordinary.

If the last three years of our lives here in the lucky country had been a movie, last Saturday’s election is where the credits rolled in, an adagio piano arrangement playing as the protagonist holds their hands aloft, finally achieving their glory. And fade – end scene.

But that would ignore the movie’s story.

We’ve left out the part where a Tamil family sleeps soundly in a weatherboard house in Biloela. Sleeping children, a father preparing for work. Our camera closes in on dark uniforms. They bang on the door, enter the house. There are cries, confusion. Border force drags the family away in the dawn before the sun rises. I have left out the dramatic music because it wasn’t there. Just a silent empty house and a plume of forgotten dust.

From there the camera lifts above the Queensland landscape, moving swiftly above nodding umbrella grass, touching the edges of a road sign: Welcome to Canberra, The National Capital. Within the boomerang of Federal parliament, the halls bulge with loud whispers, earnest faces. Scott Morrison sits alone in an office while outside a Prime Minister is rolled. Morrison rises to face a press conference, ego and malice clenched firmly in hand.

The story sweeps inland to a home on the outskirts of Dubbo, where a mother of three starts her car for the fourth time that morning. Yet another interview to attend about performing in interviews for jobs that don’t exist, in Dubbo or anywhere else. Later that night she opens a letter that tells her she, and her stay-at-home son in their $200 a week rental will need to pay the federal government $8,000 because a man on $450,000 a year in a rent-free house thought it was a matter for some other God, not his.

We watch them try to deny it at first, but nobody is listening. They save the extra dollars from where they can, but yet another debt letter rolls in. When the son can no longer see his life with no job and no debt, nobody sees the car leave the road at midnight because sometimes the road ahead becomes just too dark to see anymore.

I left out the sympathetic bystanders, because there weren’t any there.

We swoop across the eastern sea board and drop down to see the tabloid’s editors up at midnight, drafting and rephrasing the latest drop straight off an email from the Prime Minister’s office onto their pages, because to publish it with any journalist’s context or analysis would mean certain death to their bottom line and who would advertise all the Harvey Norman sales then? The punters awake, read the daily news that God is in his heaven and Scott Morrison is the best leader in the land.

The cities turn black and the countryside turns red. Smoke clogs lungs. The lens moves upwards to a smoke tornado that pulls across the bottom of the world and smothers the map of Australia. Families flee, koalas burn alive. A small boy in a Mallacoota sunset rides his boat across a blood orange sky. Scott Morrison silently boards a flight to Hawaii with his family and his hollow men, and of course they order free drinks, because whenever Morrison is involved, Australia always pays.

Back in Australia, a group of farmers shoot their cattle. A rural family is told their fire fighter son is never coming home. Scott Morrison relaxes and pours himself another beer on Waikiki.

If we were to add music, this would be the part where the strings begin. Perhaps a lone cello, mournful, because we need to set the right mood. Morrison was always about the mood.

From here the camera sweeps us between states and premiers, between empty streets, between people’s faces, first confused, then anxious. The leader Australians are looking for steps up to the microphone and tells Australians he is off to the footy. Fade out from the scene. Insert a dramatic pause because a sudden urgency has filled the world.

The face masks do not stop the hollow men though. The pandemic merely drags the movie into its dramatic centre where deserted cities are juxtaposed with lobbyists and mates. Inside the confines of the Prime Minister’s office, the camera lingers on his face. It is every man for himself at the pig trough. Money, money, money. But none for you. This is utopia for the capitalist class. Everybody has their ink-bombed hands out. Everything is for the taking, for there are no rules, no consequences in Morrisonland. In the end Mistah Kurtz, absolute power corrupts absolutely.

I am not in this movie because no woman is. The story was always about Scott Morrison’s world, where the men are rapists, or loud or angry and always, always at the front of the scene. The women of course, are invisible just the way Morrison likes them. The women don’t matter because they never mattered regardless of how many of them yell and scream and march because the scriptwriter for this movie is happy to sacrifice the unseen extras for a headline. All of it, every scene played out, is for the cameras.

Nobody is there to help. No nation’s leader. Rudderless. A country all at sea with no captain. And still the tabloids tell us all what a wonderful man he is and how he saved a woman on a beach once and look at his lovely family as the cameras turn to his thumbs in the air.

The lead man in Morrisonland plays high viz in a large truck while 500 kms away ten lonely men stare out from upstairs hotel windows. We can pull the camera back from their faces, imprisoned in the glass and fade away because they are not important in Morrisonland. We can erase whoever we like from the story, just as Scott Morrison did in his entire Prime Ministership. All the world’s a stage in this broken jaw of our lost kingdoms.

And now he is gone.

The narrator tells us our story has ended. Morrison ends his scenes like the coward he always was, sending spam text messages to bewildered voters about a boat that was probably organised to create yet another fake moment of reality. Reality and make-believe merged in Morrisonland and in the end, none of us could tell the difference.

He saw himself out. And then he cried. He cried for the cameras trained upon him. Poor fellow my country. Weep not for my country, weep only for you. A self-serving narcissist to the final scene.
Yes, Scott Morrison is gone. Thank god he is gone. He achieved nothing. He gave us nothing. He left our nation the poorer for his stain upon it. A charlatan and a pitiless, second-rate actor, he will not be mourned. Nobody will mourn him. There is just a darkness in our country where he once used to be.

And a light now shining for what is.