Politics
Morrison is taking us all out on a date, and we’re totally forgetting what an arsehole he is
April 14, 2022 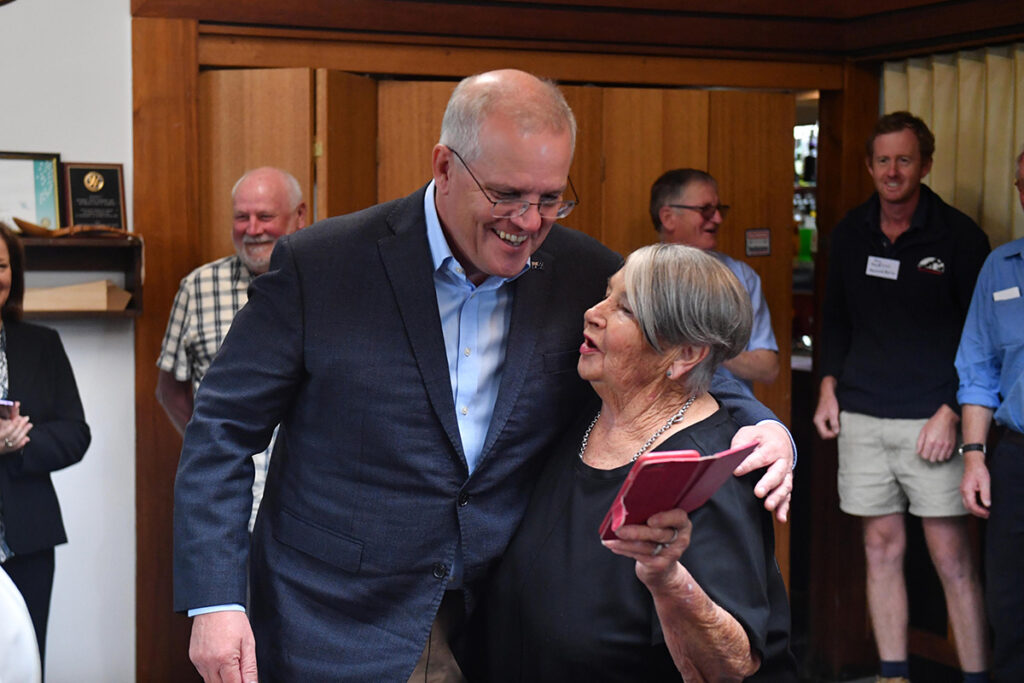 The election kicked off with the figure of 4%. That, if you Google it, is the unemployment rate. By the end of the week, it felt more like the percentage chance that Albanese will win the election from here.

It was a terrible error, mainly because Albanese’s whole ego is based around his pride in having completed an economics degree. He even embarrassingly posted an old Uni essay on Twitter when people previously questioned his credentials.

Given that Josh Frydenberg is interested in things I’ve said more than three decades ago, with one even making front page ‘news’, here’s my 1981 essay on ‘The Neoclassical Theory of the Competitive Market System’ as submitted to Sydney Uni as part of my Economics Degree. pic.twitter.com/3zmPSwpwR7

The mistake will get to him.

It was also bad because of how Albanese delivered it. The first rule of making a gaffe is that if you’re going to stuff up, do so in a way that takes at least 25 seconds, so that the sound bite is too long for a crisp outing on the evening news. Instead of waffling his way to the wrong answer, Albanese simply repeated the journalist’s question (a cardinal sin), and then fluffed it. It was possibly the crispest soundbite Albanese has delivered as leader.

The most galling aspect of this week has been that it just feels so unfair. I don’t know about you, but I’ve found it incredibly frustrating that, a week into the election, the entire country isn’t just focusing on the last three years of maladministration.

Are we all just going to forget about the corruption, cronyism, cover-ups, misogyny, victim-blaming and incompetence? Not to mention the racism, kleptocracy, utter lack of basic accountability, and the missing-in-action approach to every single crisis this nation has faced.

How is this election not simply a referendum on the incredibly botched vaccine rollout that cost us a year of our lives? That alone should deliver Morrison from power.

This is a terrible, terrible government run by a man well-versed in the dark arts of emotional abuse, who is now inflicting those skills on all Australians.

Why does it feel like he’s about to get away with it? Why doesn’t anyone remember the abuse we’ve endured?

Labor wanted this election to be the great remembering project, and until the election was called it almost seemed like it was working. Its plan was to turn up to the fight with nothing to attack, so the attention would remain focussed on the government’s record.

Instead, on day one the election immediately became the great forgetting project. It’s becoming clear that for the next six weeks, Morrison is taking us out on a date to the circus. Suddenly we’re at the carnival and there are lots of bright and shiny new photo ops and they’re very distracting and we’re quickly forgetting his neglect over the past three years.

He even puts on a sincere face and admits he wasn’t the best partner in the past, but he promises he’ll do better. And look, he’s even cooked a curry for you to prove it.

Memory is so important to accountability, but we need to admit that this election is not going to be that moment of cathartic release.

As much as this election should have been about Morrison’s record, Morrison is simply too shameless to let that be a problem for him. How can you hold someone to account if they continuously insist they’ve done nothing wrong and it was all in your imagination, love.

Assisted by the media circus, he’s got a clear path to run a decent scare campaign against “unknown Albo” and stumble across the line to an infuriating victory.

Of course, the way out of emotional abuse is not to change the abuse. Labor needs to start talking about itself for once. Focusing on what it wants, not what he wants. The cost of living is soaring. Albanese proudly keeps telling us he used to be poor. Why not lean in on that?

The obvious solution to higher prices is higher wages. It’s something the Coalition is structurally allergic to delivering. It’s a perfect wedge issue against Morrison.

But more importantly, it fits into what Labor’s campaign needs to start arguing: that Australians can aim higher. Scott Morrison is such a “near enough is good enough” boyfriend to the nation and we are at a moment where that’s actually not good enough.

But perhaps most crucially, it skewers Morrison without even mentioning him. Everyone knows Morrison is a low-road guy. He’s all about low standards amongst his colleagues, low pay, lazy work ethic, an it’ll do attitude. Even his curries look mediocre.

If Labor wants to win the aspirational outer suburbs, they urgently need a message of hope about how the next decade unfolds for Australia. Scott Morrison literally doesn’t want to aim for higher wages, high climate targets or higher standards for politicians. Why not make that what the election is all about?

Australia has aimed very low for very long under Morrison. But it’s date night, and Morrison’s doing his darndest to distract from everything he’s done for the past three years. Ironically, the only way Labor can get people to remember Morrison’s many, many failings is to start talking about themselves for once.

This was a piece from The Shot Club, a new email newsletter that focuses on the political and cultural strategies we need to shift the world from being an oligarchic dystopian hellscape into something vaguely liveable. If you haven’t already, please sign up to receive the newsletter.