Politics
The long, long, long list of all the times that Scott Morrison has said ‘it’s not my job’
April 21, 2021 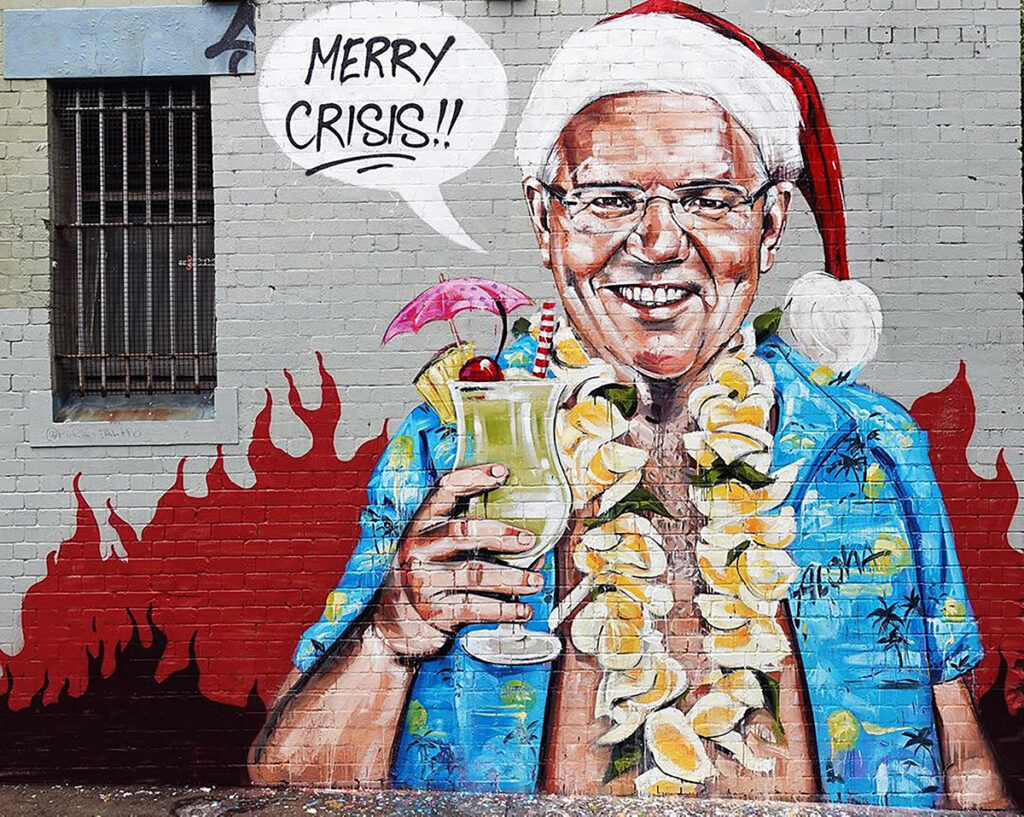 Learning rape is bad has clearly been an exhausting task for Scott Morrison. Making matters harder, while on this journey of discovery he’s had to not do a lot of things people seem to want him to do.

Firstly there was not reading a dossier on an alleged rape, not contacting the victim of another alleged rape, nor firing anyone involved in its abysmal handling and cover-up. Then there was not addressing the unconscionable five Indigenous deaths in custody in four weeks, just shy of the 30 year anniversary of the Royal Commission into Aboriginal Deaths in Custody, the recommendations of which have largely been ignored by him and all his predecessors.  And now on top of all that, he’s managed to not come even close, not even a little bit, to hitting the vaccination rollout targets he so confidently promised in order to distract us from all the other things he hasn’t been doing and all the things he didn’t do before that.

How doesn’t he find the time?

To be fair, Scott Morrison has a hard job. I couldn’t do it, and not just because I tweet too many swears and am wanted by the tax office.  But while it may not be his job to fix everything, it would seem our fearless leader believes it’s not his job to fix anything.

This is a man who took an international vacation when the country he is paid to run was quite literally on fire. A man who declined to attend any one of the nationwide women’s rights protests sparked largely by his own inaction. A man who refuses to stand down a sitting MP who has been caught red handed stalking, harassing and catfishing people.

Morrison’s vacuity goes beyond a hard-core stoner-level lack of motivation to repair broken people, places, policies and promises. His reign of disdain is a study in apathy and indolence, full of absences and shirking. His infamous justification for his mid-bushfires Hawaiian holiday – “I don’t hold a hose, mate” – is just the tip of the iceberg.

I have watched incredulously as the man has uttered the words “It’s not my job” about things that are quite literally his job so many times it’s practically his catchphrase.

Here is a a definitely not comprehensive timeline of all the things that may or may not be but probably are or at least have at one time been or not been Scott Morrison’s job:

2015 (As Minister for Social Services)

February 20: In an exasperating interview about immunisation and the Productivity Commission’s “No Jab, No Pay” idea, journalist and national hero Samantha Maiden appealed to Morrison for a substantive comment on the matter.

“It’s not my job to tell you how to write stories!”

While true, this conflicts with every other interview and press conference the master of spin has ever done.

Verdict: Not his job but also kinda his job.

June 19:  Speaking on Melbourne radio station 3AW about accusations of paying people smugglers to turn back boats, Morrison refused to comment on the morality of border protection operations.

“It’s not my job to be an ethical theologian or any of these things, it’s my job to do a job, and my job was to stop the boats and that’s what we did.”

Ignoring the falsehood of his vessel-ceasing claim and the absence of religion in the matter, I would argue that:

Verdict: A little bit his job.

August 21: Again on 3AW, when pressed on allegations of staffers in his department linked to the leaking of hacked data from homewrecking hobby site Ashley Madison.

Yet he was happy to police the private lives of all LGBTQIA+ people by supporting the marriage equality plebiscite and publicly stating he would be voting no.

Verdict: Not his job except when it’s his job.

“If people expect me to be a culture warrior in this job, that’s not my job.”

Said the man who, as Treasurer, slashed $84 million of the ABC’s funding.

Verdict: It’s not not his job.

October 3: Asked about his hopes for Australians in the years ahead by Mike Crichton on Perth radio station 98Five FM, Morrison somehow resisted mentioning eternal damnation and cracking curries.

Aside from the fact that this is pure bullshit from a man who has, among other things,  cut university funding so drastically it will 100% “get in the way of people’s visions and dreams”, his unwillingness or inability to offer aspirations for the people he governs is frankly disturbing.

January 31: “That’s an absolute bloody insult.” Pillar of etiquette Alan Jones’ tried to get a rise out of the PM over his Thai counterpart not responding to his enquiries about detained semi-pro footballer Hakeem al-Araibi, but the PM was having none of it.

Verdict: It really isn’t and really is his job.

April 17: In the lead up to the election, which many considered a done deal for Labor, Morrison was asked by AFR Weekend how confident he was of securing victory.

“That’s not my job. My job is to make the case for why the government should continue to provide the strong budget management, the strong economic management, which has enabled us to invest record levels in hospitals and schools and mental health and aged care and disability care.”

Weird answer, bro. Also if he knew then what we know now he wouldn’t be flexing about aged and disability care.

Verdict: While probably not specifically mentioned in his job description, I proffer that confidence is a sizeable part of his job.

April 19: Similarly, when the Daily Mail (LOL) enquired if he’d thought about what he’ll do if he doesn’t win.

“I don’t contemplate it because that’s not my job.”

This man is terrifying.

May 14: Continuing on the theme, he told the West Australian that he wouldn’t prophesise on the likelihood of WA MPs Christian Porter, Ken Wyatt and Steve Irons retaining their seats.

“I don’t make predictions. I am a candidate for prime minister, it is not my job to make a commentary on an election.”

August 19: Chewing the fat with renowned political mind Karl ‘At Least It’s Not Sunrise’ Stefanovic, the Prime Minister shut down the TV host’s attempts to bait him into slamming Victorian Premier Daniel Andrews over his alleged Covid failings.

“That is not my job. My job is to keep focused on the challenge that I have to protect Australians every single day, and I am a very singular-minded, focused person as you know when it comes to dealing with challenges, and that’s where Australians need my focus, not on politics.”

Whether it is or isn’t his job to discipline state leaders, I’m pretty sure being able to handle multiple challenges at once is extremely very hugely in his position description. It’s in most job descriptions.

Verdict: The phrase  ‘not my job’ has lost all meaning to me.

October 11: At a press conference in Queensland, Morrison was pushed to justify his government’s Covid-response early withdrawal scheme that had at the time seen over half a million young Australians empty their superannuation accounts.

“I’m not going to go around telling Australians how to spend their own money. That’s not my job.”

What did he say earlier about enabling people’s plans and not getting in the way of their dreams? He mustn’t have meant retirement plans and dreams.

Verdict: Does it even matter?

December 18: Morrison emphatically told The Guardian that Covid restrictions are a matter for state and territory leaders.

I would have loved to have seen the reactions to this of those “other people” whose decisions he’s apparently not hired to second-guess. After a year of being thrown under buses when things were going poorly and shoved aside when they were going well, I’m sure this was music to their Covid-ravaged ears.

Verdict: I stand with Dan(iel Day-Lewis). A fine actor.

January 18: The PM was grilled on 2GB radio on whether he was disappointed with then-President of the US Donald Trump’s in the weeks leading up to President-Elect Joe Biden’s inauguration and specifically concerning the Capitol riots.

First, if condemning the actions of foreign leaders isn’t his job then forming letters into words into sentences isn’t mine. Also, I believe the leaders of China, Myanmar, Turkey and other countries who have at once been condemned by Morrison would beg to differ.

March 1: And lastly, for now, at a press conference at Kirribilli, the prime minister was interrogated about his silence and lack of action regarding allegations of historical rape against a then-unnamed MP in his cabinet. And while he didn’t invoke his exact pseudo-catchphrase, he came pretty darn close.

“Well, that is a matter for the police. See, I’m not the Commissioner of Police.”

He later repeated the sentiment, stating “I’m not the police force.”

Verdict: The past few months in Australian politics have been some of the most upsetting, maddening and draining that I can remember. The reasons for this extend beyond this particular issue to the vaccination rollout, Aboriginal deaths in custody, the NDIS and more. But on the matter at hand, Scott Morrison’s appalling, negligent responses to Brittany Higgins’ rape case, the case against Christian Porter, stalking and harassment allegations against MP Andrew Laming are inexcusable.

No, he’s not the police. But he is the leader of this country and by his own admission, quoted above, it is absolutely his job to “protect Australians every single day”.

Instead, he has shown nothing but contempt for the women of Australia, consistently putting his loyalties to his ministers and party members above our rights and our safety, even when we’ve come to him begging.

I personally can’t wait until his employment in this position is terminated, however that may happen, and I never have to hear him say “it’s not my job” again.