General News
Alan Jones seems to want us to die of Covid. I want him to die of anything
July 20, 2021 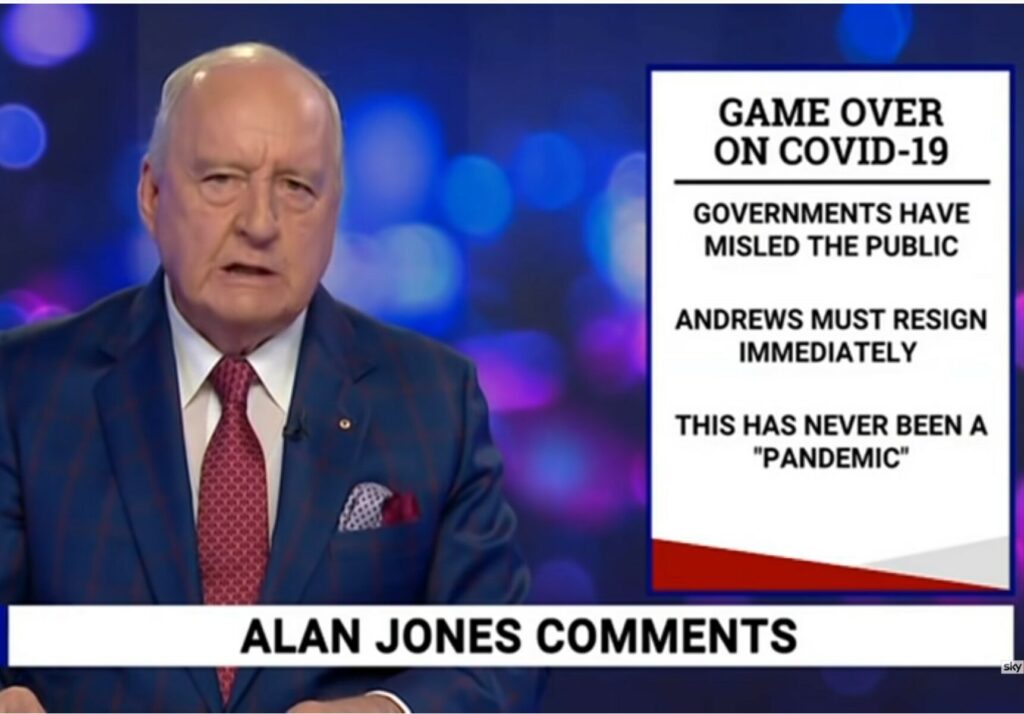 Like Sister Act 2, Alan Jones is back in the habit. The habit of being a shitdick. For a while now, Jones has been ranting on Sky News and cherry-picking sources to try and argue that “more people are being harmed by the collateral effects of lockdown than by covid-19”. Which seems batshit crazy. Because it is. You’d have to be absolutely sick in your dumb fuck mush brain to live in a world where we see army trucks hauling away bodies, mass graves and funeral pyres, temporary morgues, people drowning in their own fluids in hospital hallways, and think, “Nah, that time we had to sit home and play Ticket To Ride was worse”.

Alan Jones has been spouting this kind of bullshit throughout the pandemic, repeatedly saying that it’s no worse than a flu, and also literally saying that it “isn’t a pandemic”. To be clear, the reason he is saying that, is because he is either a dumb fuck, or a liar.

But to make up bullshit about the worst pandemic in living memory is just dangerous. Officially, four million people are dead from Covid, but the real number is likely to be significantly higher, and that’s not even getting into the people with significant long-term health problems. So when this decrepit old turd gets on Sky News and starts telling people it’s all made up, not only is he demonstrably wrong, he needs to be roundhouse kicked down some stairs.

I’m saying that “metaphorically”, like when Jones said that Julia Gillard needs to be put in a chaff bag and thrown out to sea. Or maybe I’m not being metaphorical, like when Jones was found guilty of inciting hatred in the Cronulla riots. Actually, in a legal sense I don’t want to say if my comments about Alan Jones being roundhouse kicked down some stairs are true, or a metaphor, but I will simply say that if someone did that, I would experience a large amount of joy.

I think happy thoughts about him suffering all the time. In fact, thinking about Jones suffering has the same effect on the brain as double-dropping a couple of MDMA caps. But what terrifies me more than anything is knowing what’s going to happen when the old shit sack inevitably croaks it. That great day is coming soon but when it does the Australian media is going to do what the Australian media does best: be a bunch of soft cocks.

We are going to see tributes from left and right. There’ll be heartfelt opinion pieces with quotes like, “we didn’t always see eye to eye, but he always spoke his mind”, and “no one can deny his passion and he wasn’t afraid to flirt with controversy”. There will be toothless think-pieces about how “robust debate” is great for our democracy and that whatever position you take he was a larger-than-life personality who loved a scone, loved his rugby, and loved his country.

Fuck that. In my view, he was a vicious serial liar, a dangerous demagogue and someone who made Australia a worse place.

What I actually hope will happen is that when he dies the media will say “good riddance, chuck him into a chaff bag, and throw him out to sea”. I hope that we talk about his racist hate speech that inspired one of our most shameful moments in the last 20 years. I hope we talk about his continued use of violent imagery when talking about women in power. And I also hope we start talking about his time as a teacher, and how he treated the boys in his care…

It’s been out there for a while now that Jones was a creep. According to Chris Masters, who wrote a biography of Jones, his former students talk about fearing him. They talk about late-night trips to the room of a man they described as voyeuristic. He would insist on strapping their legs in rugby games, give them inappropriate attention, and even write love letters. It was allegedly the discovery of such a letter that led to him resigning from King’s School in the 70s.

His time as a teacher is something that the media have danced around, with subtle references to him being “divisive” or “controversial” here and there, and there’s been evidence that student’s at King’s School have suffered physical and sexual abuse, but never has there been an outright accusation that Jones has crossed the line from creepy and voyeuristic, into actual abuse.

But I digress. In a separate, and unrelated thought, defamation law only applies to the living.

Anyway, back to Alan Jones. I do hope that when he dies people come forward, or at the very least the media runs with Masters’ deleted chapter where he details the stories that the lawyers felt were not possible to publish. But his past aside, there’s enough to say about this colossal fuckwit’s on-air behaviour that his legacy by rights should be thoroughly trashed. He wasn’t a passionate man who always spoke his mind, he was a practiced liar who purposefully stoked bigotry in order to make a profit. He didn’t care about his country, he cared about nothing more than his bank balance and his profile. He should be remembered as a dastardly maniac who encouraged violence, who spread lies after lies about climate change and Covid, that have, and ultimately will result in Australians dying.

Some might say that it’s despicable to celebrate a person’s death. Not true. People celebrated when Bin Laden died. People celebrated Saddam’s death. They celebrate when child molesters and murderers die and they celebrate the deaths of criminals and soldiers at war who they see as the enemy. The celebration of death is as old as time. It’s also not always hypocritical to say that you hope someone dies, whilst criticising them for making people die. That’s getting into the old “both sides” fallacy where the fascist soldier is just as bad as the resistance who are trying to fight back. And Jones is absolutely a fascist, but without the fashion sense.

When Alan Jones dies the world will be a slightly better place. There’ll be one less voice of pure hatred on the airwaves, one less dude encouraging people to hate their neighbour because of the colour of their skin, and one less piece of shit spreading dangerous lies that are putting our country at risk. Let’s not celebrate the man for his passionate views, let’s piss on his worthless legacy.