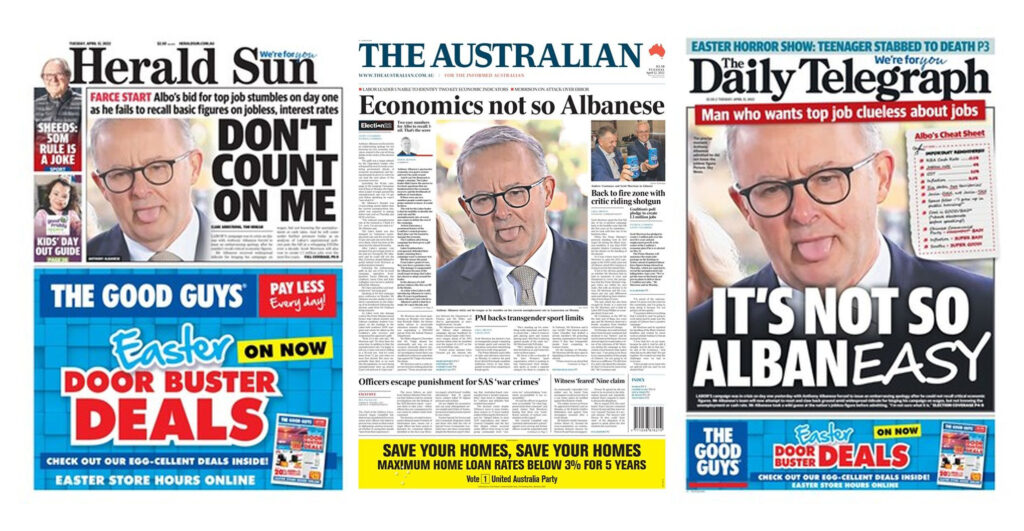 If parliamentary politics is out of touch with the real world at the best of times, campaigns are a form of mass amnesia. After three years of ineffectual, uninterested governance, of colour-coded rorting, of floods and fire and plague mismanagement, of dangerous climate negligence, of a blatantly self-interested refusal to establish an anti-corruption commission, of the cover up of a parliamentary sexual assault and the tone-deaf response to the women’s marches, of the failure to secure enough vaccine in a timely manner to return the nation to the rhythms of daily life, now that we’re in campaign mode… seemingly this stuff doesn’t appear to matter very much at all.

Instead the voting public is being presented with a horse race of daily winners and losers determined not on legislative record, or on policy differences – where there are any – but on who is better at soundbites, who the newspapers prefer, and trivialities like who failed to recall an easily Googleable number. They are a shrunken battleground, largely divorced from context like how a government has performed or how many of a Prime Minister’s colleagues think he’s a “complete psycho”.

Consider the two halves of this Saturday’s Herald Sun front page. When we ask ourselves why Australia is nearing a decade of mediocre and cruel conservative rule, coverage like this cannot be ignored. It is not the only factor, but it is a crucial one. 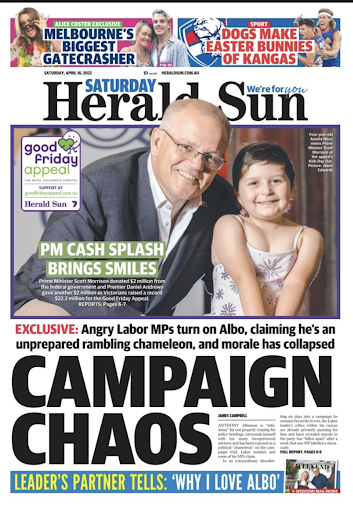 In case the beaming grins in the photo are too subtle, “PM cash splash brings smiles” hammers the message home, while also obfuscating the fact it isn’t the PM’s cash being donated to the Good Friday Appeal. This is as blatant as propaganda gets without featuring the phrase “our glorious leader”. Facebook’s user data disclaimers and the Liberal Party’s sexual harrasment policy aside, few collections of words deserve to be treated with more cynicism than The Herald Sun.

Today, the nation awoke to the news that Anthony Albanese has contracted coronavirus. Australia has had 5.5 million cases of coronavirus but Albanese’s, of course, represents yet more “chaos” – a word we’d all better get used to hearing more of because it is the anchor of this particular narrative. 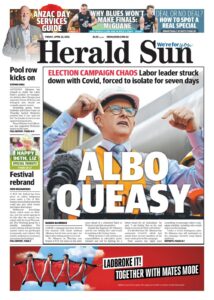 When Scott Morrison contracted coronavirus late on March 1, it did not make the following day’s front page, bumped off for more important matters like a picture of fashion, footy, food, and Dave Hughes. 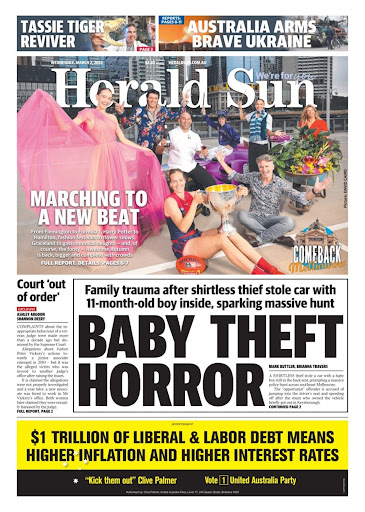 The tale emerging from The Herald Sun and across the broader Murdoch stable is a simple one. The ALP is flummoxed, a mess – attributes literally no one wants from a government, particularly in such high-anxiety trauma-riddled times. Albanese’s now infamous gaffe out of the starting blocks has allowed this framing to gather its own momentum.

We all know what happened: on day one of the rest of his political life, the would-be-PM couldn’t recall the cash rate and the unemployment rate. For the better part of week one, this is what the nation talked about. Hundreds of articles were churned out, many dramatically declaring it the end of the ALP’s chances, the tale playing into the long-established myth that the ALP cannot manage money. All subsequent mentions of chaos build upon this in the public imagination.

The secret to finding an effective opposition leader is one whose name doesn’t rhyme with anything.

This slip up did move polls. Or, more accurately, the wall to wall commentary moved polls. By Monday this week the narrative around favourites and underdogs shifted. A Fairfax/Reserve poll saw Labor’s support drop from 38 to 34 per cent. The following day’s Newspoll was bleaker: Albanese’s net satisfaction fell to -14, the lowest for an opposition leader since Bill Shorten didn’t win the 2019 election. You couldn’t blame ALP faithful for that all-too-familiar sinking feeling returning to the pits of their stomachs. Is it happening again?!?!

What the media so often fails to acknowledge while covering this part of the political landscape is its own impact. Not only do these narratives shape how we feel about politicians, they convince us we care about things more than we actually do, and vice versa. Whether actually important, or trivial, these narratives become self-reinforcing; they become true because we are told they are true. While Albanese’s muddled numbers were undoubtedly a campaigning fuck up, there is no realistic parliamentary scenario whatsoever where a Prime Minister not knowing the cash rate off the top of his head would make any difference at all. No one will end up bankrupt or in jail because of it. People check these things!

But we are told it matters in campaigns, so it matters.

Consider also that Morrison’s campaign has not been gaffe free. He got the JobSeeker rate wrong, and at a bizarre presser called assembled journalists “Mr Speaker” three times.

Just as Albanese’s gaffes are not an indicator of a broken mind but rather human fallibility under pressure, Morrison’s don’t mean anything much at all either. The difference, though, is that they did not result in a single front page declaring his campaign in “chaos”, his chances of forming government over.

We are a distracted nation, and the Murdoch media’s hyper-focus on these gaffes diminishes us all. It moves our discussion ever further away from the true substance of what would make our future better. ABC’s Vote Compass data reveals that climate change is the most important single issue this election for the most voters, 29% of the country. The economy, the issue we are repeatedly told matters most, secured 13%. And yet we’ve barely heard a peep about the climate crisis from the media or either major party, the limelight hogged by brain farts and moronic scare campaigns. We all deserve better than this.