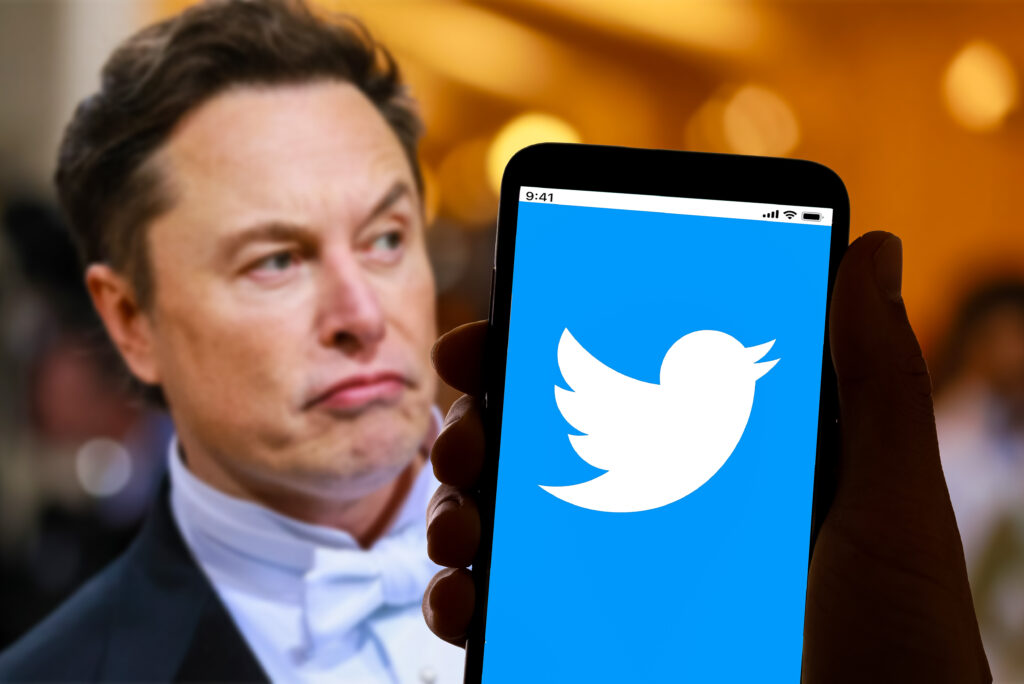 Humanity’s immorally wealthy, irrationally resentful, international-discourse-owning oligarchs have had quite the astounding few weeks, their intellectual rigour and tactical superiority over and above mere wage-earning mortals on display for all to see. Facebook founder Mark Zuckerberg fired more than 11,000 people this week, the market having reacted cynically to his plans for the Metaverse, an online hub that allows users to interact with advertisements inside what looks like a PlayStation 3 game. Donald Trump and Rupert Murdoch’s much hyped “red wave” did not eventuate out of the US midterms, a resounding “nein” from voters towards the architects of America’s neo-fascist MAGA movement. Kanye West decided his anti-semitism was now acceptable within the Overton Window, severing his connections with his business partners, friends, fans and money. And Elon Musk… My god, man, where do we even start?!

Twitter, an addictive and informative hellsite with the relaxed ambience of a landmine waiting to be stepped on, this week descended into anarchy and farce under the stewardship of the world’s richest man – a trashfire burning on $8 rocket fuel sold directly by the trashfire’s new owner. 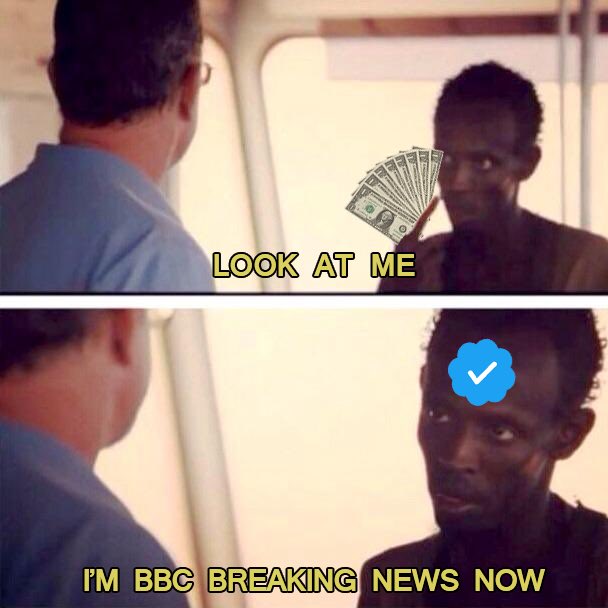 Having recently been bullied into purchasing the social media platform for roughly twice its estimated value by Old Twitter’s lawyers, his MAGAnificent admirers, and a raft of self-esteem issues, Musk wasted little time shattering Twitter’s shatterproof windows. Like a million new bosses before him, he was here to shake things up. 7500 staff members were fired almost instantly. Some were then rehired as fast because why get this stuff right the first time, it’s only people’s lives.

Then the public pitch began. He took to his overpriced loudspeaker and proclaimed that comedy on Twitter was “legal” now the Muskmeister was in charge – a woke strawman apparently slain somewhere along the way. A week later he banned a comedian, Kathy Griffin, for making fun of him. He then urged “independent” minded voters to support Republicans in the midterms, changed a cascade of rules to accommodate his latest ego-bruise, publicly announced baffling decisions, publicly rethought them, and was somehow even publicly bargained down by horror author Stephen King. It’s been a shitshow. 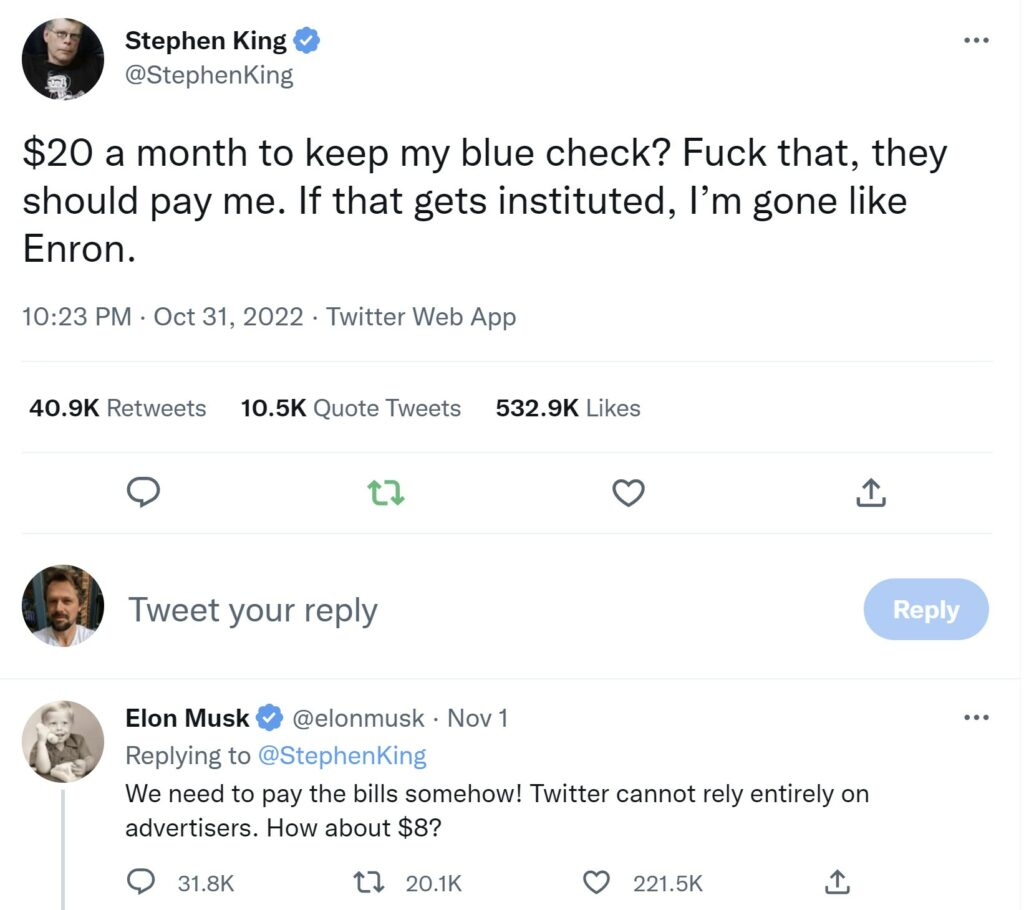 But all of this is mere prelude, summarised in yellow text crawling through space before the film begins, to the events of Thursday this week when Musk’s signature policy change kicked into action: the new Twitter Blue.

Yesterday, Twitter’s verified “blue check” went on sale to anyone willing to pay $8 for it, Musk dangling a magic badge of legitimacy and algorithmic favour above his chuddiest admirers under the guise of restoring “power to the people”. Presumably because he wants them to like him.

Under the “$8Chan” system, the verified badge no longer comes with any form of verification: it is not reassuring proof a person is who they say they are, as it once was, it is proof a person has or did recently have eight dollars.

The problem – and this should have been obvious to everybody – is that Twitter has developed its own language and shorthands over many years and its new owner is trying to change what certain words mean. The anarchy and misinformation flying as these two understandings collide is mesmerising to witness, like a charred autonomous vehicle pileup on the highway, but it is quickly eroding the reasons people stay on Twitter.

Day one for Twitter’s unverified verification system began with a fake but verified Lebron James asking for a transfer from the LA Lakers, leading to a stir in NBA circles. 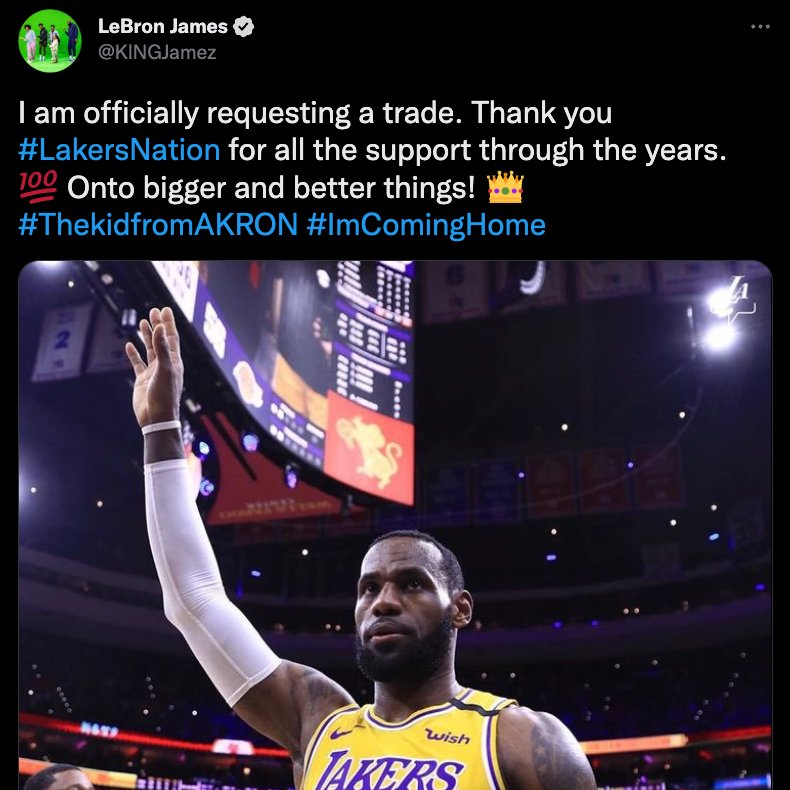 Shortly afterwards a fake but verified President Joe Biden assured the world his dick was wet.

This was followed by a fake but verified Nintendo account posting a picture of Mario flipping the bird. 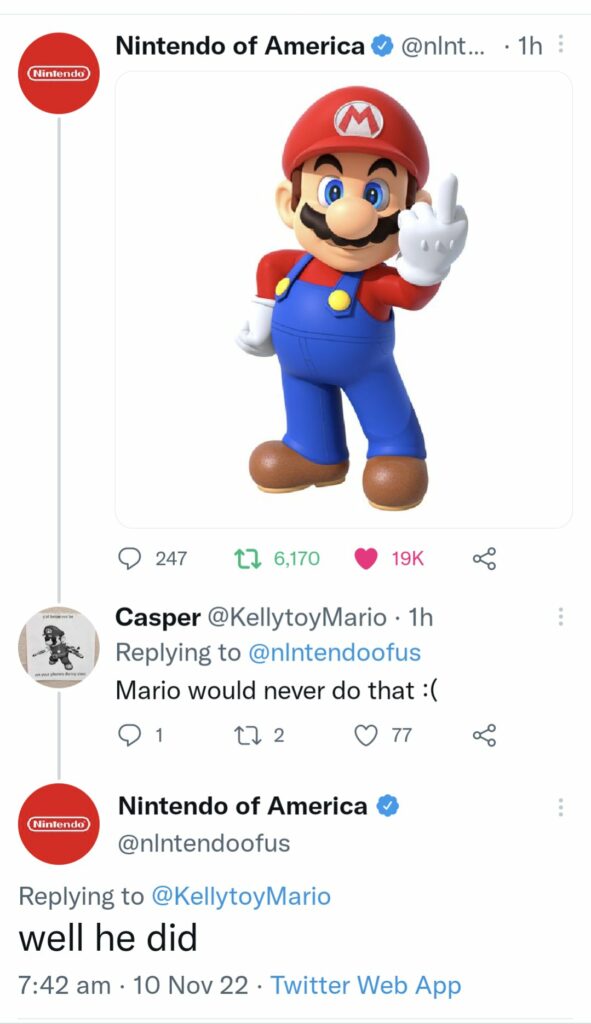 I’m certain Nintendo, a wealthy, protective and litigious potential advertiser will be thrilled to know anyone can semi-convincingly impersonate Kirby or Luigi and then tell a kid to go get fucked for less than the cost of a gram of weed. Do not misunderstand me: I’m not crying for the brands, I’d just prefer them to waste their money on Twitter so we don’t have to. Paying for the website actively ruining my brain is basically a non-starter as far as I’m concerned.

All of these instances, and countless more, went mega viral yesterday, and all of them are but a taste of the madness to come. Yes, people have always impersonated other people on Twitter for the lols, but it’s never been this easy to make the ruse this convincing. And the site’s greatest safeguard against this happening to advertisers, celebrities, political figures, and journalists – the old verification system – has been actively undermined by the new system.

This has happened because Musk fundamentally does not understand the site he has purchased. He viewed the old checkmark system through the eyes of an insecure man accustomed to purchasing clout and not through the eyes of a normal person who just wants to know exactly who they’re yelling at online.

That was always the beauty of the hellsite: the interesting people that, despite myriad good reasons not to do so, made themselves available to any old crank. Knowing that I could get on the beers, pump Evil Empire, and then drunkenly hassle the real Tom Morello at 3am about how his guitar solos could be improved was a magical experience not available on any of the other social networks. Why threaten that addictive concoction?!?

For as long as it has been possible to do so, oligarchs, unelected lords of capitalism, have sought to own our national conversations, shape our discourses, and renegotiate the borders of our brains. They do this because it is a godlike ability for a mortal to wield, and even flying into space in insultingly phallic dick-rockets eventually gets boring. A good story can exonerate crime, sway democracy, leech wealth, topple empires and turn history. Shaping a narrative shapes reality for the people that believe it.

The tragically hilarious aspect is that the tools to steer global narratives are too powerful and complicated to be wielded by a reply guy fishing for dopamine hits. Musk’s power, wealth and influence allowed him to purchase Twitter, but it’s Twitter that now owns him.

Hubris is a motherfucker. Now, many large, entertaining, noteworthy accounts are disappearing faster than talks of unionisation at Tesla factories. Advertisers are fleeing and their billions of dollars are unlikely to be covered in allotments of $8 chunks from Twitch streamers.

If anything can be learned from this mess, I urge Twitter’s next owners, who will pick up a smouldering ruin for quite the bargain, to ensure that if Joe Biden tweets about his dick we know without a shadow of a doubt that it’s the real Joe Biden tweeting about his dick.