General News
Extreme Moderates are a threat to our way of life
October 27, 2020 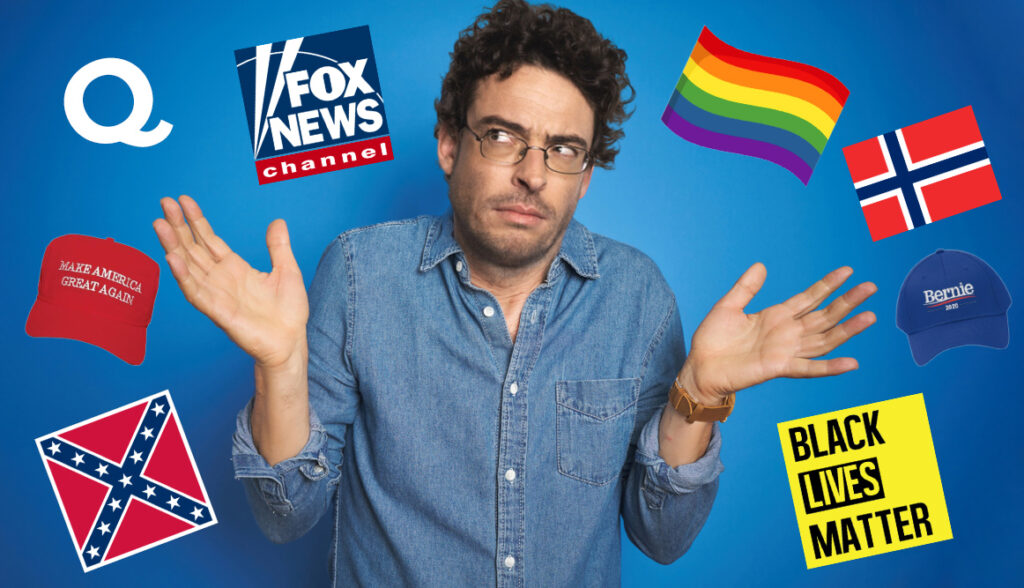 This is a year of extremes. There’s Proud Boys and ANTIFA squaring off in the streets of America, anti-maskers and #DictatorDan protesters in Melbourne, and both here and abroad environmentalists are being blamed for bushfires. All the while, moderates around the world are calling for calm.

The “rational centre” clutch pearls and fan flustered faces as they scream, meekly and calmly, for a return to normalcy. They condemn the jokes about Trump’s covid diagnosis, they furrow their brows at the lockdown measures, decry the increasingly revolutionary tone of the Black Lives Matter protests, and they insist that rather than radical change, we need to stay the course and wait for the economy, and the world, to get back to “normal”.

Just the other day I was listening to Tom Ballard’s podcast “Like I’m A Six Year Old” and who did I hear but infomercial hack-turned media commentator Joe Hildebrand. This contrarian-for-money who doesn’t have a single original thought in his precisely 100-IQ wonder-white brain was once again crying for a return of the “sensible centre”.

It was an hour of my life I won’t get back, sacrificed to the most ludicrously bland talking points – like when he said the only person who could beat Trump is a “straight, middle of the road, unscary… really boring, whitebread beige candidate”. He said this with a presumably straight face, seemingly forgetting the 2016 election happened. He went on to talk about radical politics, saying that he had “yet to see a revolution that’s worked” forgetting that 2.5 seconds prior he was talking about THE COUNTRY FOUNDED ON A FUCKING REVOLUTION.

It was hard to focus on the interview over the sound of my head pounding against a brick wall, but he also made the case that he thinks that the Australian Labor Party has been “hijacked” by the “extreme left”. That’s right, the party most commonly known as “LNP Light” is too radically left for old Joe “I-cum-when-the-game-ends-in-a-tie” Hildebrand. According to Joey, if you ain’t in the rational centre, you’re a moron.

But it’s all bullshit. There’s no such thing as a “rational centre”. These self-described “moderates” of our political system are nothing but extremist thugs with better PR teams; they’ve achieved power with knives, guns, and napalm, and they’ve stayed in power with the help of a little tool called “The Political Compass”.

If you actually break it down, it’s wild that the term moderate even exists. Our economic system is literally built on slavery, whether it was the slavery of the past, or the modern variety that exists today – 24.9 million people on this planet are currently indentured, beyond their control, into forced labour making our phones, clothes, or our morning cup of coffee.

Even as I type this, my keyboard, my monitor, my computer, the clothes on my back, everything has child labour or indentured servitude somewhere in its supply chain.

That’s the thing that sellout hacks like Hildebrand always forget. When he talks about how good life is for the average person, he neglects to mention what it’s like for the people working in the sweatshops making our iPhones. He forgot to mention the Indigenous Australians displaced for over 200 years. And he forgets to mention the stolen wages that millions of us have suffered from through a gradual, “moderate”, “reasonable” erosion of our rights at work.

These points don’t come up when talking about our precious neoliberal economic wasteland. And this is the wasteland that moderates are fighting so hard to keep.

I didn’t have to rush out and buy masks when covid hit, because I already had a bunch left over from the bushfires just a few months prior. Bushfires that the scientists ALL agree are caused by the rapid warming of the globe. Warming that is happening because of our factories and transport ships, and coal-fired power plants because we need all those toys and gadgets that those slave kids made. The world is cooking, because these “moderates” are cooked in the fucking head.

It’s insane to me that we live in a world where so-called moderates will earnestly plead with the population that “violence is never the answer” and that we should never throw a brick, protest illegally, or, god forbid, punch a nazi. I mean that would be a totally fair argument to make if you were Amish or your name was Mahatma Gandhi. But to make that argument when we live in a country that was built on stolen land is batshit crazy. Our nation was born when a bunch of dudes rocked up hundreds of years ago and just took it at gunpoint and killed those who resisted. This is not bleeding-heart lefty hyperbole – this is an indisputable, historical fact.

These moderates aren’t pacifists; they aren’t against violence at all. They’re just against violence from anyone that isn’t them. They own the monopoly on violence. Moderates are like that kid in primary school who would run up to you, punch you in the arm, and then yell “truce!!!” They’re that fucking kid.

But how have they done this? How is it that you can spend 200 years shooting your enemies dead, ignoring science, killing the planet, and building an economic system on outsourced and offshore indentured servitude, and somehow say that someone who wants to dismantle these things is an “extremist”? It’s by controlling the narrative. Using graphs, wordplay, and the media to exert power through discourse, they can normalise whatever they get up to. And the afore-mentioned political compass is a perfect example of this.

Here’s how you control the narrative with a political compass: Sarah wants to eat an apple, Jimmy wants to drink a milkshake, and Bill wants to eat a plate of dogshit. Jimmy draws a line on the page. On one end of the line he writes “apples”. On the other end he writes “dogshit”. And right in the centre he writes “milkshakes”. Now he can look at that line and say “wow, dogshit on one end, and apples on the other. Two extreme positions on the fringes of lunchtime ideology. In many ways, these positions are just as bad as each other. Obviously the only rational choice here is a moderate approach, therefore, we need to have a milkshake”.

This is how Jimmy controls the narrative and shuts down any discussion. Because dogshit is positioned as the polar opposite to apples, Jimmy can now compare the two as if they both have the same merits.

“But Greg!” I hear you ask: “Are you saying that far-right conservatism is a stupid ideology not worth discussing? Are you literally comparing it to dogshit?” Yes.

That’s exactly what I’m doing. A hard right position is dogshit. These people believe stupid shit because they are, by and large, stupid people. And moderates love them because it helps them shit all over people that believe things can and should be better – it makes their stupid moderate positions seem less dumb. It’s easier to excuse a bit of slavery in your production line if you can contrast it with a bunch of extremely online Neo-Nazis desperate to recreate all the worst mistakes of our past.

To put it simply: you can’t rationally categorise political ideologies into a neat graph or table. Some opinions shouldn’t even be on the table, e.g: climate change denial, Holocaust denial, and “covid is caused by 5G and Bill Gates”. The people who believe this shit are genuinely lunatics.

Lunatics that own the largest media company in the world, but lunatics nonetheless.

In the real world, when convenient framing devices are removed, there is no “moderate” position. Do you want slaves or not? Do you care that climate change is happening or not? Do you think it’s cool to rob and steal to get ahead or not? Do you think it matters that humans are causing one of the biggest extinction events in the history of Earth or not? And if you’re for slaves, bushfires, and would rather make a buck than see your kids have a future, then you’re not a moderate. You’re an extremist.