General News
History can turn on moments like this
March 5, 2021 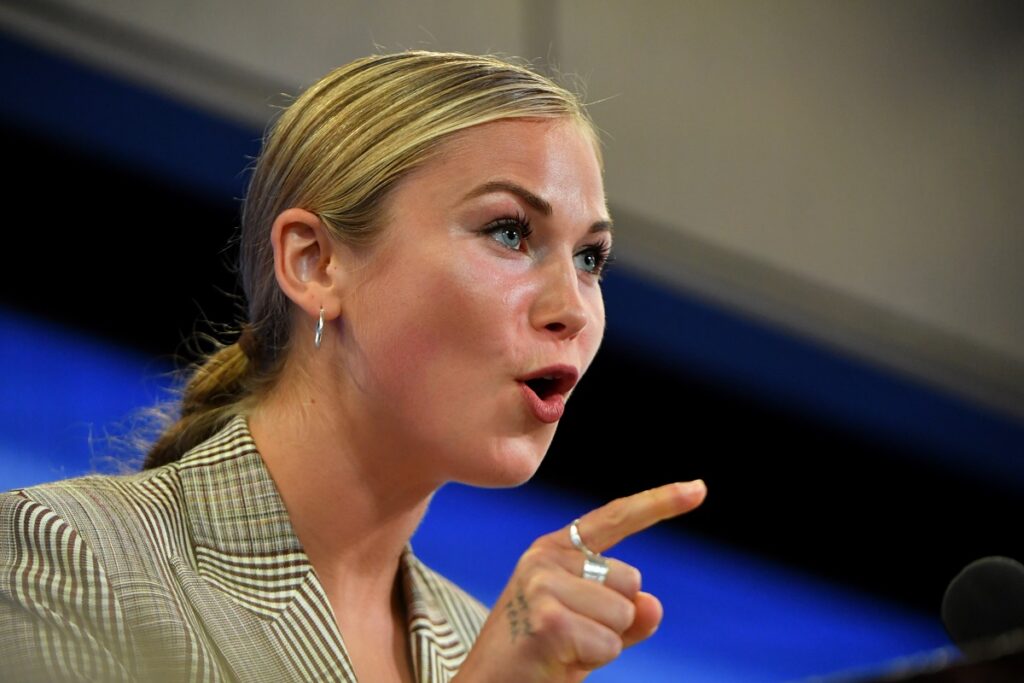 “It shouldn’t take having children to have a conscience,” said Grace Tame, the Australian of the Year, earning her honours all over again. She paused to consider if her evisceration of Scott Morrison’s character was complete. It was not. “And having children doesn’t guarantee a conscience,” she added, microphone dropped so definitively the Earth’s crust should consider itself on notice.

Grace Tame made these remarks in response to the Prime Minister’s signature brand of folksy sociopathy, most specifically his anecdote about Jenny’s ability to clear up his lingering moral ambiguities around workplace rape – something Scotty was apparently on the fence about prior to receiving the wisdom of a good woman.

Rape occurs across the nation’s workplaces wherever the powerful are given licence and opportunity to abuse their power. It diminishes the severity of these crimes and these wounds to view them through the prism of party politics, but this moment has seen both our Federal Government and the conscience of a nation take an unflattering turn in the spotlight.

If Morrison’s words are difficult for him, his actions should be damning. He is currently in the process of failing the survivor of one rape, Brittany Higgins, and standing by the alleged perpetrator of another, Christian Porter, Australia’s Attorney General.

The first sexual assault, Ms Higgins’, occurred little more than 50 metres away from the Prime Minister’s own office. The alleged rapist, a Liberal Party staffer, was afforded self-interested impunity from the law, an apparent “you scratch my back, we’ll cover up your rape” arrangement.

The second alleged sexual assault, Porter’s, is categorised as “historic”, distinguishing it from Parliament House’s contemporary in-house “rapiness” problem ever so slightly. But the label “historic” is itself a loaded term, the implication being time washes away sins when it does little of the sort for victims; Porter’s accuser took her own life in June 2020.

During an excruciating press conference, Australia’s first legal officer assured us the well-being of the deceased’s parents was at the forefront of his mind. He then accused their dead daughter of being a liar on national television. Thus relegating the situation to the legal void husks like Peter Dutton describe as “he said, she said” situations.

“The rule of law must be upheld,” said Morrison yesterday, oozing the moral integrity of a used DVD boxset of The Sopranos. In settling on this defence, the nation is also being asked to believe that any inquiry into Porter’s rape allegation would be a perversion of justice, an inversion of the burden of proof, and a threat to the very principles of the law.

Discounting the fact that basically any other workplace in the country would need to examine allegations like this, we have now been asked to accept there is nothing to be done. A nation’s survivors are yet again having their trauma PR-managed into the shadows, the courtiers to power in Australian media deployed; Canberra’s rot covering up for more of Canberra’s rot.

Make no mistake: if Australia is comfortable with the Liberal Party’s staggering cruelty and brazen unaccountability, it is our national conversation that provides it with this social licence.

Over endless column inches and TV minutes across the decades, Australians have absorbed justifications for every patriarchal ceiling, every murderous neoliberal impulse, every dehumanising bit of racism and oppression. A many fanged fuckwit hydra. This decay wafts most offensively from the effective monopoly of NewsCorp’s shambling corpse, but it seeps through the entire landscape.

We learnt this week that many of the prominent male journalists in Canberra are close friends with Porter, his public record of misogynistic behaviour not enough to warn the powerful-adjacent away from good chill times with the actually powerful. Peter van Onselen, Andrew Probyn, and Chris Uhlmann all used their platforms to urge Australians to consider how devastated Christian Porter is right now, all without disclosure.

That Australia’s press has once again failed to uphold the most basic ethical standards should not come as a surprise. To put this extremely bluntly: if you ever see a story on The Shot penned by me titled “Why Dave’s mate isn’t a rapist,” please cancel your subscriptions.

The weekend prior, on Insiders of all places – the ABC’s own annexed patch of Sky News – the establishment line scolding victims for going public through the press not the law was hammered home. The panel did this with a straight face days before Porter, the human embodiment of our justice system, the equivalent of fucking RoboCop being accused of a rape that will not be investigated properly, announced his own incident had been explored quite enough.

How on Earth could anyone, sycophantic Insiders panellists included, blame Brittany Higgins for sensing she would achieve more justice through the press than the justice system?

The protection racket that forms around powerful abusive men – legal, cultural, and in the media – is under the nation’s spotlight like never before. Sky News’ official twitter account, Australia’s own portal into Rupert Murdoch’s brain tentacles, has still failed to mention these sexual assaults at all, apparently having found a more important topic to rally the masses around.

If you looked at Sky News FB page you'd think this was the biggest story yesterday. pic.twitter.com/7G80fIrGng

This is yet again politics over people; careers over lives; reputations over justice. Cultural mould, a deeper stain, the open acknowledgment powerful people can get away with practically anything in this land. Grace Tame’s account of the grooming predators inflict on their victims is devastatingly relevant here.

Australia has reached a new low, and don’t trust anyone that tells you otherwise. For a nation’s traumatised survivors, and everyone that cares about them, this fortnight has been a battle between states of grief and rage.

Grace Tame is a rare light in the dark place Australia finds itself. Her words give voice to untold stories of trauma, and in sharing her pain so bravely and so eloquently she lightens the load on others so brutally and systematically crushed. Shattered by the official response this week, it is now time for the public’s response. On March 15, women, men, young and old will protest outside Parliament House and in Australia’s capital cities at the inaugural “March 4 Justice”.

Christian Porter has asked us to consider the possibility that he is innocent. That is his right, of course, and arguably fair. But in the interest of balance – and of justice – we must also consider the opposite as well.

IF he did commit this horrific crime, not only did he get away with it, he was always going to. The precedent laid here for our hidden and protected sexual abusers should chill us to the core, for what hope of justice could any victim have against a man this powerful, this successful, this surrounded by the protections of patriarchy?

Though justice isn’t on the side of sexual assault victims today, or possibly even tomorrow, history can still be. When a nation is this palpably enraged by its leaders, by its own moral decay, the world can change.