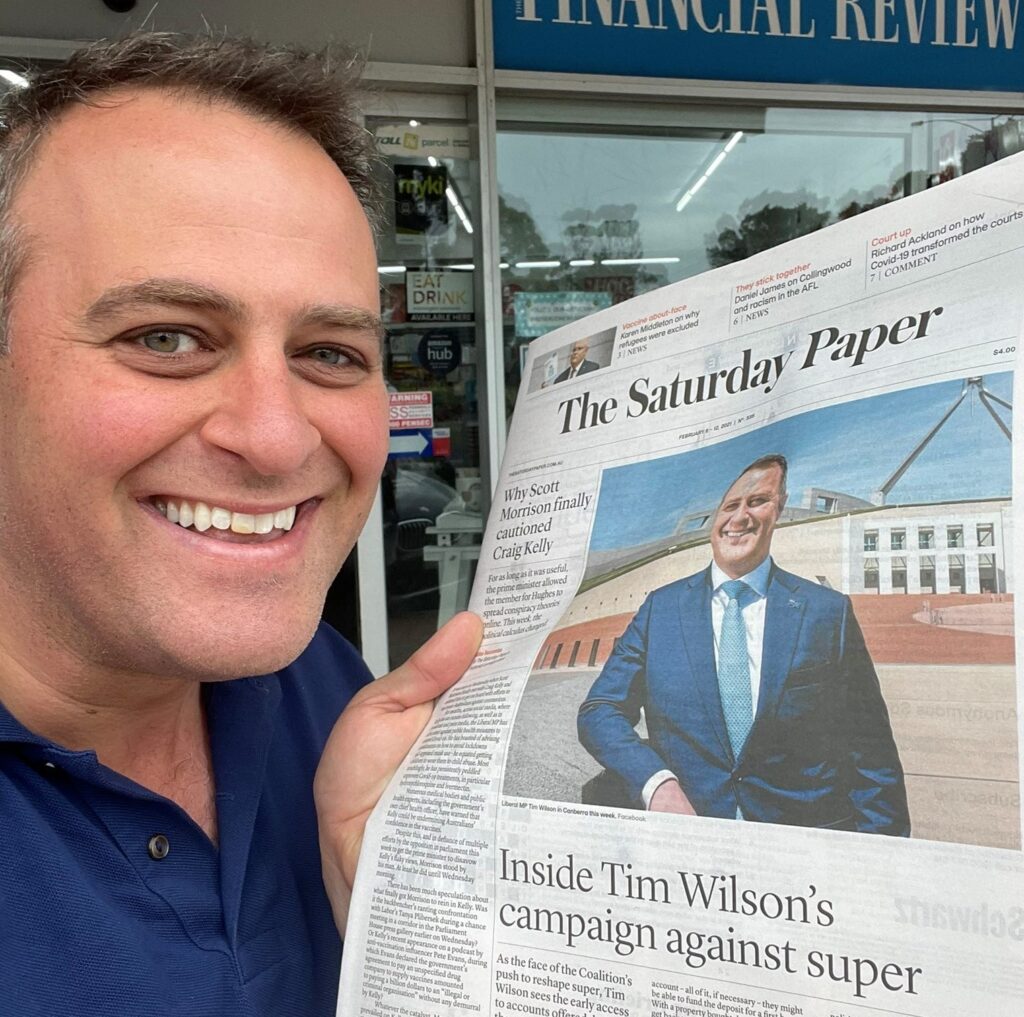 On Sunday one of the most punchable faces in a party made up exclusively of punchable faces made a brilliant tweet. Not brilliant in the sense that his argument holds weight (Liberal arguments rarely do) but brilliant in the sense that it is a stellar example of how Liberals have gone from strength to strength by convincing poor, working, and middle class people to vote against their own interests.

I just really don't think that would ever happen.

The key to conservative success is not the content of what they say, but HOW they say it. They never address the issue; they use debating techniques to change the way the issue is framed. Scott “I-eat-my-earwax” Morrison managed to convince workers to put themselves at risk during a pandemic simply by saying that “all jobs are essential”. Matt Canavan defended Craig Kelly’s idiotic conspiracy theories by arguing that “it is only by challenging ideas that we get better ideas”. And now Tim Wilson is trying to argue that superannuation, and not absurdly unaffordable prices and suppressed wages, is the thing that’s stopping you from buying a house.

And as a petty man with too much time on his hands, I’m keen as a bean to unpack this one little tweet in detail, to really break down how they do this so well. Strap in.

The first thing that’s genius about this whole thing, is the title. “Homes First, Super Second” is honestly brilliant and in four words sums up the Liberal Party success story: invent a problem, then sell it in a dishonest way that SOUNDS like decent, common sense.

The libs are scared: the housing market is on dangerous ground. Prices are going up, but that’s probably because of government policies like negative gearing, home builders grant and record low interest rates. Now if the housing market wasn’t so artificially propped up, we’d expect prices to fall, which would be great for people who don’t own homes. But that would be bad for wealthy property investors whose greasy little hands grind the gears of the poor-people sausage machine that is the Liberal Party.

They’ve given us early release of super, they’ve made sure interest rates are low, but with Job Keeper’s numbered days and without making a commitment to raising wages how long can these housing price rises keep up? They need more people buying houses so the prices don’t drop. They need the very people who would benefit from a decrease in house prices to support a policy that would make sure prices don’t fall, so their afore-mentioned greasy-handed donors can keep drinking ivory milkshakes or whatever it is rich people do.

So the libs change the narrative from the very real problem of houses being too expensive for ordinary people, to the fabricated problem that you can’t use your superannuation to buy a house. That’s right; you’ve got the money for a deposit on that million-dollar asbestos-filled shitbox near the old oil refinery, but it’s all tied up in super. Super, rather than being a nest-egg for your retirement, in four simple words has now been reframed as a barrier to you owning a house. Ten seconds ago it was a good thing, and now it’s a bad thing. And for many young people that bullshit propaganda could work: 50 years might as well be eternity! Might as well use that cash on a house right?

It is, clearly, a false dichotomy. There’s no relationship between housing prices and your superannuation. Those are just two different things. Why not just say “Homes first, ice cream second”? Houses are more important than ice cream right? Surely we all agree on that, so why not ban ice cream so we all have more money for houses? Why not ban all luxury retail??

What about “Homes first, footy second”? Let’s sell off all the stadiums and footy teams and use that money to build houses. Is footy more important than having a place to live? If you put forward that policy you’d rightly be called a dumb fuck, but change “footy” to “superannuation” and suddenly you’re a big-brain LNP genius.

“Homes First, Super Second” SOUNDS like common sense, but really it’s just another excuse for the LNP to attack superannuation and draw your attention away from the fact that housing prices have outstripped wage growth by so much that for most of us, owning a house is about as realistic as being able to afford a jet, a superyacht, or out of season berries at Woolies.

How lucky for Tim that this unnamed “Labor Man” just happened to run into him at the bowls club. Cynics among you might be wondering if this exchange actually happened? Sure it did. It happened exactly like Tim said, and then everyone clapped and lifted Tim above their heads before a man walked out from behind the bar and said “I’m the father of Economics Adam Smith and I’d like to have your autograph Timmy” and then he was awarded the Nobel Peace Prize but they forgot to film it but trust us it fully happened.

The great thing about referencing some random voter on the street is that no one can call you on it. He has no proof it happened, but I have no proof he’s lying (he is though). It’s like how comedians with kids always seem to catch their kids saying something incredibly funny and insightful right in time for their gig that night. Politicians just keep running into average Aussie blokes with pearls of wisdom that seem to back up whatever policy they’re trying to sell. But never on camera for some reason. When the cameras are rolling it’s more like this.

The final flourish on this perfect propaganda is the last line: “If only Labor stopped protecting their faceless fund manager mates & got in touch with their Aussies they’d back”. Apart from grammar that makes me feel like I’m having a stroke, it’s a brilliant example of the conservative strategy in which they just make some shit up and act like it’s a fact.

In this case, they’re trying to make out that Labor is the party of the top end of town, whilst the Liberals stand up for regular Aussies. It’s demonstrably false, but so is trickle down economics, climate change denial, and the idea that Peter Dutton has a soul. The libs love making up nonsense.

Anyone with half a minute can simply google donations made to political parties, and see the the biggest donors to the Liberals are big business, whilst the biggest donors to Labor are unions (then there’s all the undisclosed dark money but that’s a whole other fucking nightmare), so the idea Labor, more than Liberals, care about the top end of town is as absurd as the idea that Craig Kelly doesn’t have a chode. But the Liberal Party knows you probably won’t google it.

And if you don’t google it, “Liberals care about working Australians” just becomes part of the national consciousness. Just like how we’ve somehow been conditioned to believe stuff like the Greens don’t care about working classes and rural Aussies. Everyone will tell you that, but they don’t really base it on anything other than the fact that the Greens live in the city and don’t wear big country hats. It’s just a statement that people take for granted as true because some conservative big-brain said it. Now it’s part of “common sense” and must be true.

So now Tim has put us all on the backfoot. We can’t argue with his made-up anecdote, we now have to shoulder the burden of proof that Labor is an elitist party, and anyone who supports superannuation is now by default against first-home buyers. Without a shred of actual logic or evidence behind his plan to bankrupt our nation’s future, “Homes First, Super Second” is just one masterstroke in the on-going campaign of getting the people of Australia to vote against their own well-being. And like everything they do, if it stands unopposed – which it basically does in our landscape of vicious right-wing media and the meek, cowed remnants of our reality-based media – it will work. I’d bet my non-existent house on it.