General News
I “pretended” to be the Victorian Liberal leader on Twitter, said I drink my own “wee wee”, and a bunch of people believed me
July 8, 2020 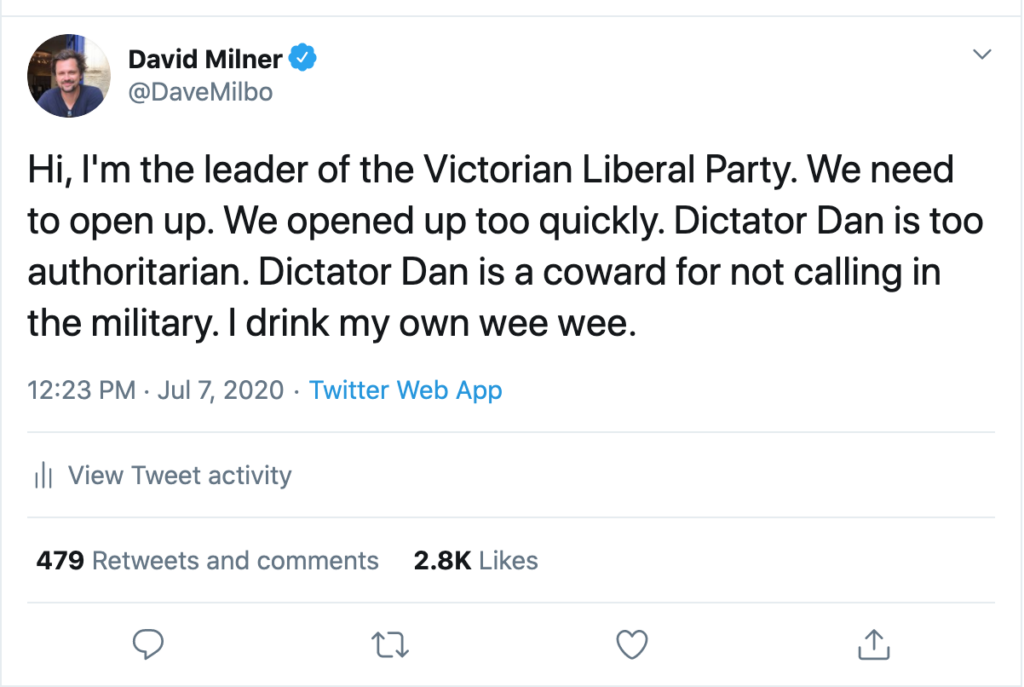 Look, it’s not my best work. I’ll happily admit that.

But possibly because everyone in Melbourne is descending into a state of delirious, desperate madness, it gained traction. The tweet has been seen by 130,000 people on Twitter, and a whole bunch more as screenshots on ALP meme Facebook pages.

Surprisingly, given the fact I said I drink my own “wee wee” while “posing” as the Opposition Leader, a not insignificant amount of people on Twitter took the tweet as gospel.

Which might suggest the Victorian Liberal leader has a bit of a brand recognition problem – whoever he may be.

(Although I can’t say for sure, I feel relatively confident guessing it’s a “he”, being the Liberal Party and all.)

Like Helen, who called “me” a “bitter and twisted idiot”, citing Daniel Andrews’ 72% approval rating to prove my idiocy.

Dan the Man doing a stirling job in the face of bitter and twisted idiots like you. You surely are a rwnj. He is still running at 72% approval dickhead because generous and intelligent ppl get how hard he is working to save lives. This sort of pile on won't win u any friends.

Or Stanley, who dispensed some solid if cliched advice.

a Leader Leads….
a Coward Complains.

Another Helen (what’s with Helens?) shared some sentiment I can’t help but agree with. We really ought to support each other through this traumatic experience and not play party politics or drink wee wee.

But you are an un Australian twerp. Where is your compassion for your fellow Australians. You just put the boot in, when we are already down.

Or John, who correctly (kind of) thinks the tone of my soundbites as leader of the Victorian Liberal Party is unbefitting of an elected official. Preach.

Why do you lower yourself to calling nsmes. Dan is acting on advice from medical experts. They are fighting something unknown until late last year. Its easy to criticise . How about fighting the disease, could you solve what the world cant. https://t.co/3BgxymXTJi

Dan Andrews is doing a better job than anyone could. He is making hard decisions sensibly, Health before popularity. Quit the politics, support the bigger picture. Stay alive.

A key difference between the Victorian spike and spikes in the US and UK is that Victoria didn’t prioritise the economy over health. Daniel Andrews did put safety first. The failures are in executing on that plan, not the plan itself.

There’s some comfort in that, and Suzanna should probably tell the Victorian Liberal leader that.

Anyway, I need to run and stock up on toilet paper before the Victorian Liberal leader, whoever he might be, makes a mess of himself drinking wee wee.