General News
I watched all of Sky After Dark’s election coverage and have some fucking concerns
May 19, 2022 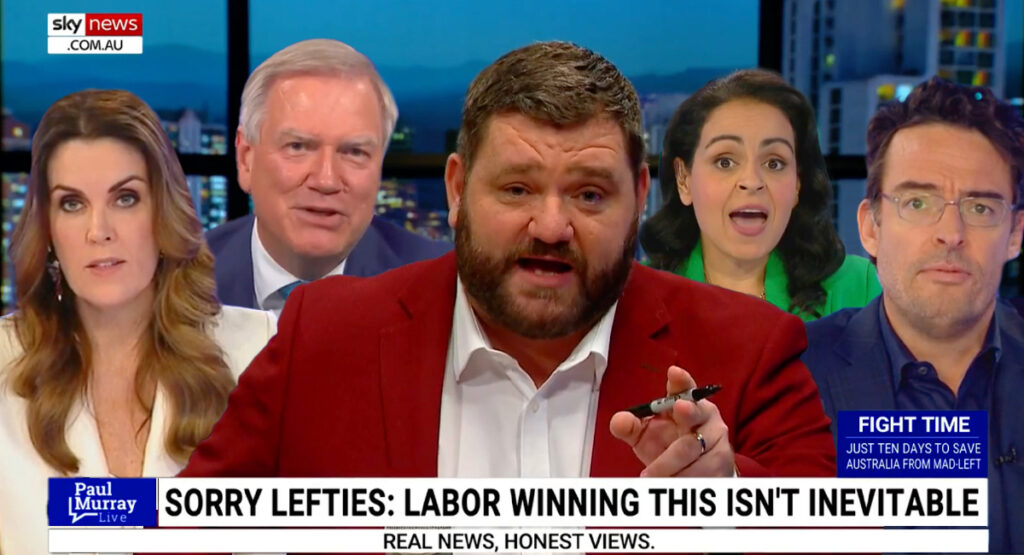 By cruel editors, I was tasked with watching Sky After Dark’s election coverage. All of it. As if this election wasn’t painful enough on its own. After a four-week long mental breakdown we decided I had seen more than enough horror.

From Rita Panahi’s ‘exclusives’ that are just her ripping stories from Qanon websites in America, to Chris Kenny’s crying about ‘ABC virtue signallers’, to Andrew Bolt’s ramblings about ‘the woke brigade’, to Paul Murray yelling about the ‘mad left’, to Peta Credlin’s constant name dropping of Tony Abbott, to Cory Bernardi’s hosting with all the sense and charisma of a wet Klan hood, to Piers Morgan’s nightly rants about Meghan Markle, to Joe Hildebrand existing; I suffered through it all.

In news that will shock nones of people, Sky After Dark was not very balanced in its election coverage. The following is a graph showing the times Sky hosts gave compliments and insults to a party or political group. This is not a breakdown of whether a segment was positive or negative towards a party, this is based on when they went beyond fact-based analysis and into opinion. If you have a problem with that methodology, fuck it, why don’t you watch Sky News for a month? 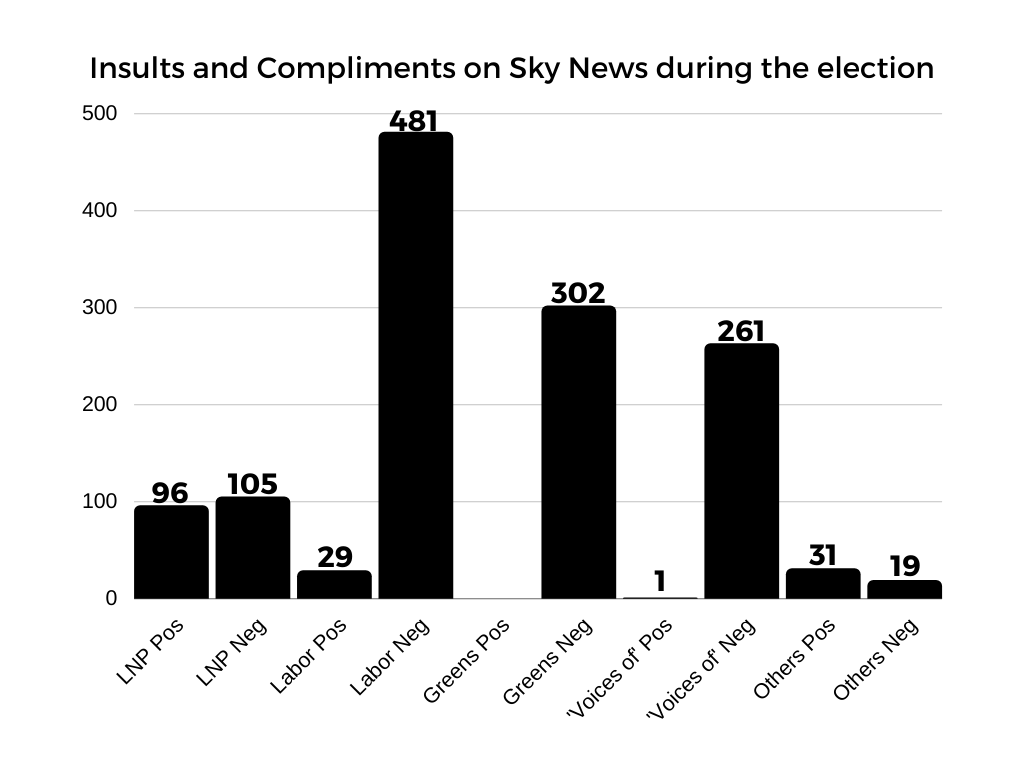 Totally unsurprisingly, Labor took the brunt of the Sky’s ire. The majority of the insults directed Labor’s way followed a smattering of key themes: that a minority Labor government would bend the knee to the Greens, Anthony Albanese ‘having the same cognitive decline as Joe Biden’, and bullshit about the Chinese Communist Party.

Insults directed at the LNP were generally of the ‘too woke’ variety, with claims they didn’t support Deves’ transphobia enough and that their budget plan would see more foreigners entering the country.

Both major party leaders copped a hammering. Morrison was too cocky on the campaign and his ‘red line’ comment went too far, whereas Albanese is a nice bloke but was not doing enough to energise his base in favour of him, and that he was pushing too far to the right-wing of politics.

Aside from the typical Labor vs LNP discussion, the high rate of insults thrown towards the Greens and the teal independents is noteworthy. These are small groups in Australian politics, yet they coped constant and disproportionate slams from all the hosts on a nightly basis – from claims they ‘plan to destroy the country’s economy’, labelling them racist anti-Semites, and accusing them of overthrowing our democracy for the elites. Often these attacks were steeped in sexism and occasionally racism, with members of both the LNP and Labor joining in.

Sky’s battle doesn’t appear to be to stop Labor at this point; it seems obsessed with stopping a Labor minority government, AKA the only chance we could see law reform that would directly hurt Murdoch. In fact, every opinionista besides Rowan Dean pushed people to vote LNP 1 and Labor 2 to try secure a majority for either side.

Some hosts went as far as to refer to the election as potentially ‘rigged’, ‘fraudulent’ and calling a hung parliament an ‘attack on democracy’, which viewers need to ‘fight’. Some, like Kenny and Murray, went so far as to push straight voting misinformation and lies, even attacking the AEC for shutting down false claims about widespread voter fraud.

According to Sky, Climate 200 works for Labor, which is concerning because if Labor wins they will work for Climate 200. Allegedly, both groups are in a ‘cabal’ with Channel 9 and the ABC, a cabal which works for the Greens who are in cahoots with the World Economic Forum and the families of George Bush Snr and Jr who set up the ‘New World Order’ to enforce communism on the world. All of this linked to both Daniel Andrews and Anthony Albanese, and somehow connects with Hunter Biden’s laptop (I fucking wish I was making any of that up). With complex webs of derangement like this, it felt like the channel wanted to begin work on an Aussie reboot of the January 6th riot.

Beneath the political bias and unhinged conspiracy theories sits a heavy framework of discrimination. See, even if Sky starts presenting all political parties equally, this next graph shows why that won’t solve anything much at all. The following is the amount of times hate speech was directed towards minority groups. 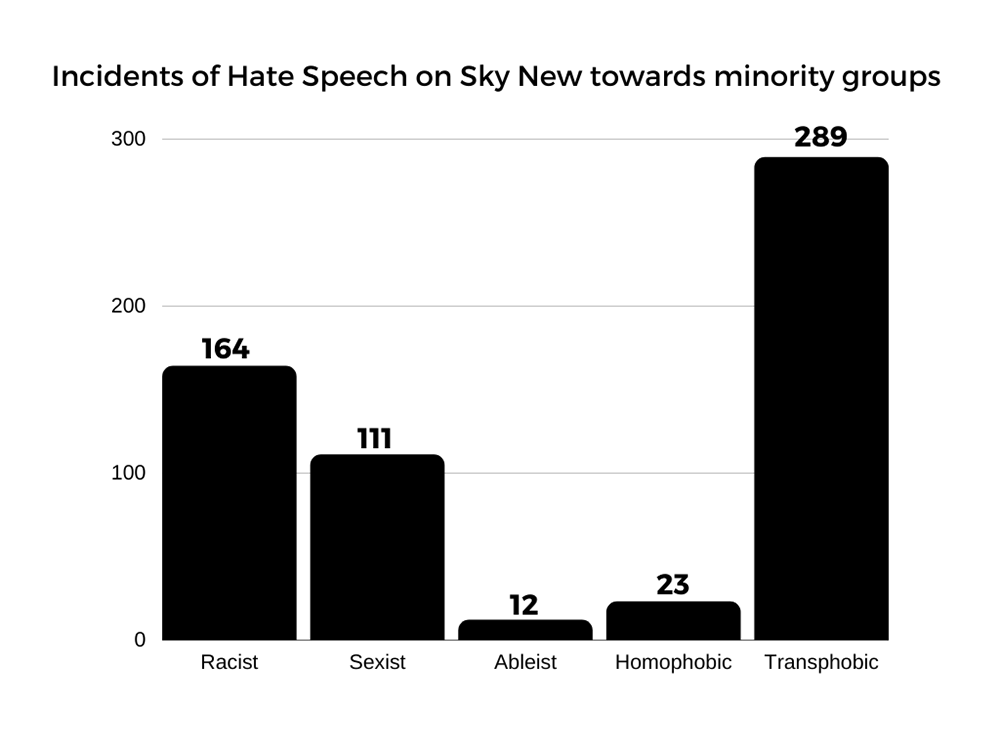 Reminder, I watched 28 days of coverage. 28 fucking days! Do you see how bigoted they are? Transphobia alone averaged more than 10 instances a fucking day! Then add in all the other discrimination and you can see why party politics perhaps isn’t the main threat; the threat is how they want viewers to treat marginalised groups.

Literally from the night of the election announcement, Sky was begging for a culture war angle. They talked about how they publicly campaigned for Deves to be picked as a candidate as far back as December. And as soon as it kicked off, they jumped at the chance to villainise trans people and transition that into attacking other groups.

Hell, even Grace Tame was namedropped and insulted 6 times during culture war segments; one of those included a swipe at Brittany Higgins as well. Leave them alone, you fucking freaks!

This election, Sky News was on the side of the powerful. Anything or anyone that could shift the status quo for the better was the enemy. This was never more obvious than in how they spoke about ‘extremists’. 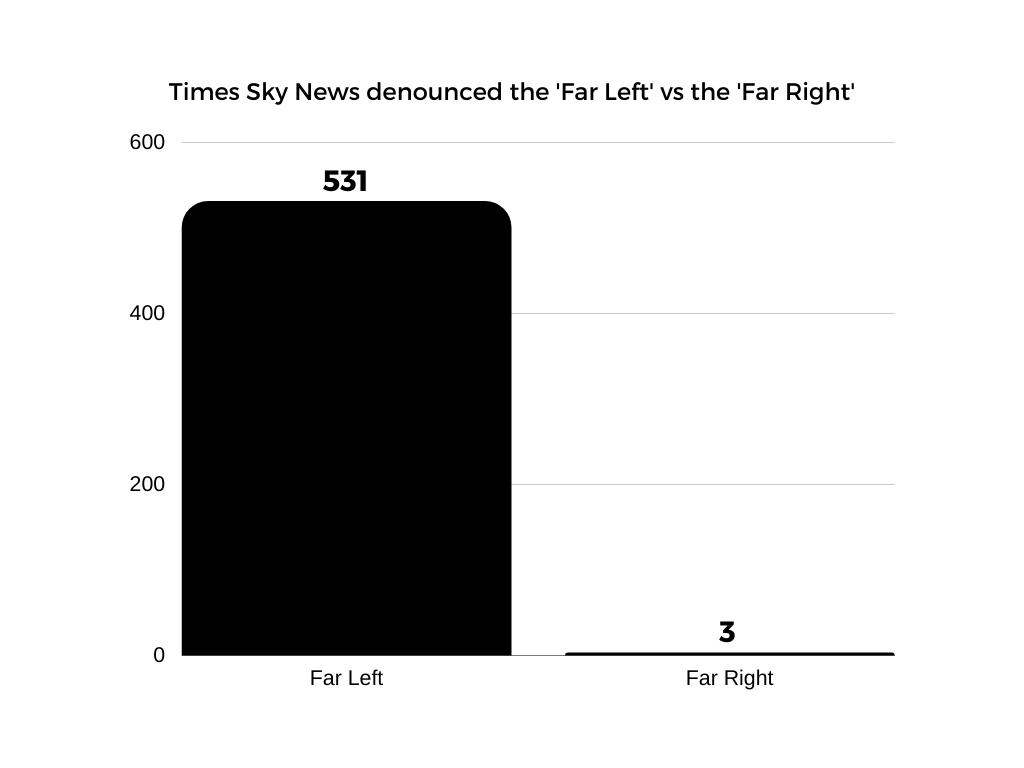 Look around the world right now: is the ‘far left’ 177x more of a real and present danger than the far right?

The idea that the far left is even remotely as much of a threat as the far right is a lie, and a dangerous one, but to say that it isn’t even close but the other way around?! Sky’s so committed to this bit that Paul Murray’s show even turned into a countdown to ‘stop the mad left’ with an angry intro monologue calling viewers to ‘join the fight’ from ‘the mancave’.

Throughout the election, conspiracy theory content was rife. There were mentions of the New World Order, Critical Race Theory, Critical Gender Theory, Hunter Biden’s Laptop, the ‘Great Reset’ and the ‘Great Replacement’ plus many, many more, all of which were connected to far-right extremism (besides one from Bernardi about vampires being real and living in Hollywood).

With nine references to George Orwell’s 1984, 11 references to ‘school indoctrination by the left’, 18 references to Karl Marx/Marxism and 120 uses of the word ‘woke’, Sky News is playing into a very specific and very dangerous crowd. Claiming you ‘can’t trust’ the media, deeming fact-checkers biased ‘cancel culture’ and a whopping 235 insults directed at the ABC, as well as pushing constant misinformation on Covid/Vaccines (99 times) and climate change (169 times).

Paul Murray even attacked news.com.au’s Samantha Maiden for her coverage of Katherine Deves, labelling her articles as being ‘hit pieces’ from the ‘bias lefty Channel 9 media’ and just over an hour after the Sky News debate Rita Panahi accused their crowd of undecided voters of having a ‘lefty ABC QandA bias’. Baffling stuff.

They want it to be clear that the only source of information you can trust is Sky and those who Sky platforms like the Spectator, Nigel Farage and Steve Bannon, AKA a literal fucking white supremacist facing fraud charges.

The station is moving so heavily towards the far-right that all three of the condemnations of the far-right in the graph above and the only compliment of any Climate 200 backed candidate during the election came from Andrew Bolt.

Sky News After Dark has certain talking points and themes that are hit on every show throughout the night, but Bolt was the only one who would go ‘hold on’ when things crossed his line, which seemed to be either blatant lies about the political process and/or actual Nazis. Basically, every time Bolt says something that goes viral for being horrible, you can trust other hosts have said something worse. Sky News is somehow getting too racist, homophobic and conspiratorial for Andrew fucking Bolt.

This is my main concern, this should be everyone’s biggest concern. Much of the anti-Murdoch focus has been the unbalanced reporting, but even if that disappeared overnight, a deeper problem festers.

Fox News infamously removed all references t0 ‘truth’ from their rules and moulded a dweeb in a bowtie called Tucker Carlson into being the biggest news host in America and the KKK’s unofficial news source.

It is clear that some of the channel’s newer ‘talent’ like Rowan Dean, Cory Bernardi and Paul Murray are all trying to be the Aussie Tucker. But unlike Carlson, they all suck at hosting tv shows. My fear is that when Lachlan Murdoch fully takes over he is going to find his Aussie Tucker, and he knows that there is a lot of power and money in it.

Either way… I am fucking free! Finally, I am done watching that nightmare! Besides the new long-term dread and short-term brain damage, holy fuck this feels so good.