loading...
General News
If you think traffic jams are inconvenient wait until you hear about the climate crisis
July 1, 2022 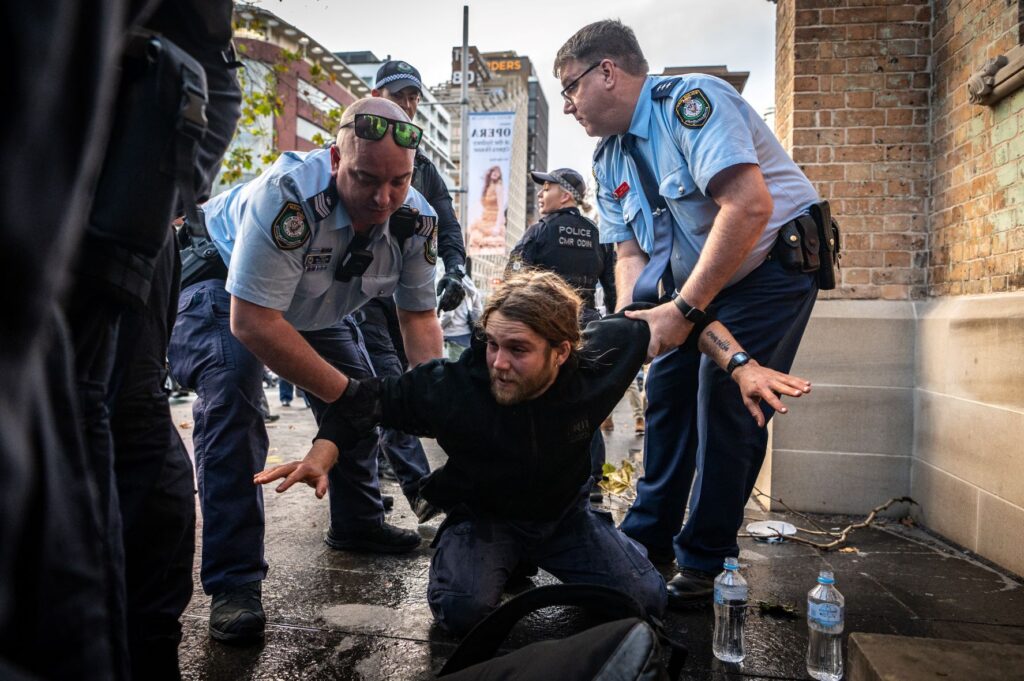 No writer, not even me, not even Phil Coorey, can make interest rates, energy supply, parliamentary staffing numbers, or Anthony Albanese seem exciting. The domestic hot-take machine is experiencing a lull, Australia’s newscycle caught in the post-election, post-actually-doing-things-about-the-pandemic doldrums.

State premiers no longer hold daily pressers filled with disease and despair; Federal Parliament is not yet sitting, its villainous caricatures recast, the furniture in the prayer room still being run over with blacklights and disinfectant. No one is jizzing on anything. The new government has earned itself a few weeks grace before the media’s serious big boy opinions start flowing again, and the peace and quiet has allowed our brightest analytical minds to flourish. 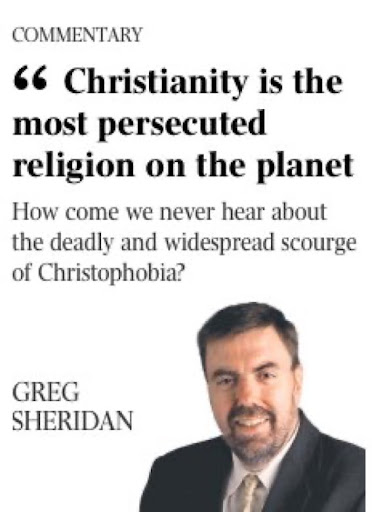 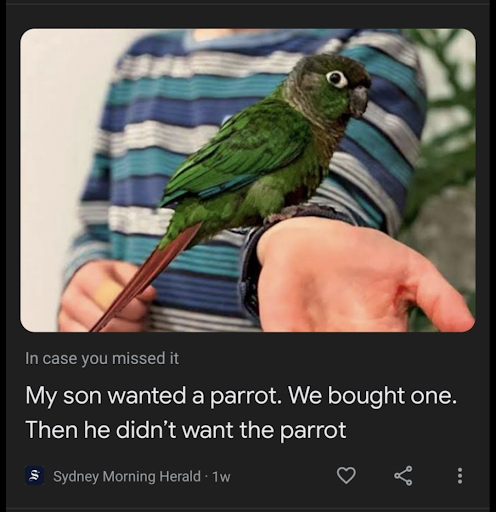 I really do hope that bird is ok. It’s hard enough being abandoned and unloved without someone dissing you in a daily newspaper. RIP, Petey. 🙏

Fortunately, for the content starved among us, it is winter and winter has always had the remarkable ability to frost over the remaining brain cells of the climate denialists at the Murdoch press. The season’s mere existence confounds them. “It’s cold!” they screech. “Didn’t all you eggheads say the planet is WaRmInG?!?!” Derp de derp de derp. 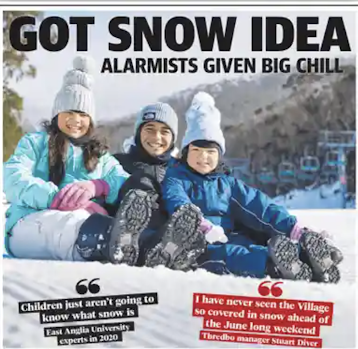 The Daily Telegraph, NSW’s Murdochbloid, a cudgel to the brain stem of any creature forced to read it, claimed Australia’s epic and early snow season had arrived “despite dire global warming predictions of vanishing snow”. “Alarmists given big chill”, the newspaper sputtered before slipping on its own drool and fucking its cousin.

This pseudo idea – that because it is cold in winter – generally the coldest of all the seasons – the climate crisis must not exist – is like trying to disprove gravity by throwing a ball into the air and looking away before it comes back down. Our record hot summers, our many “once in a lifetime” fires and floods only exist in the aftermath if you’re capable of storing and recalling memories, a trait picked up in early childhood or once journalists depart News Corporation.

The last seven years were the seven hottest years on record, you fucking morons.

In what could best be described as a 10-minute long narration of an on-air stroke, Sky News’ Chris Kenny took this theme – being a dangerous and disingenuous shyster – even further, blaming Australia’s “energy crisis”, not on multinational companies shipping more gas overseas than they hold in reserve for domestic use, but on Australia’s pitiful attempts at greening its energy sector.

Apparently the problem facing us is TOO MUCH action on climate change. Who knew?!

This is less true than most of the unreality uttered by Kenny and his cohort of cracks at Sky News Australia, a “news” organisation recently singled out by UK thinktank the Institute for Strategic Dialogue as a global superspreader of climate misinformation.

Murdoch’s Australian Fox News equivalent may be too geared towards fringe and extreme weirdos to have much of an impact on elections nowadays, but my god those fringe weirdos like spreading fringe weirdo content all around the internet where normal people have to see it. And this is actually quite a big problem.

In February, all member governments of the Intergovernmental Panel on Climate Change (IPCC) accepted a resolution stating that rhetoric of the Sky News variety from “vested economic and political interests… undermines climate science” and has driven “public misperception of climate risks and polarised public support for climate actions”. Essentially: to solve the climate crisis, we must also tackle the Murdoch crisis. Because it is from these rotten seeds that complacency and carbon continues to spew into the atmosphere.

Misinformation breeds the misconception that our climate isn’t up shit creek which in turn leads to governments not feeling much pressure to actually do something about it. And even ostensibly left-wing governments need to feel pressure on this issue.

This is why activists of the sort that pissed off half of car-owning Sydney this week are so important. They serve as a counter-balance to the mainstream narrative that things are just fine and dandy the way they are. Yes, being late on the road sucks, but you should have seen the traffic in Lismore earlier this year. We are conditioned to despise disruption of any type, even when it’s advocating for our childrens’ future. In The Guardian, former Greens leader Bob Brown wrote: “At the heart of this is greenophobia, the fear of things green, including environmentalists. It involves the blighted idea that people should be stopped from taking action to defend the environment, especially if it gets in the way of making money.”

The notion that protests shouldn’t be disruptive, shouldn’t cause any inconvenience, ignores how protests have always worked historically. Very few progressive leaps have been achieved without significant protest movements agitating and irritating bystanders at every turn. Newsflash: Rosa Parks pissed people off.

Every campaign for significant social change is marginalised, when they use civil disobedience – its been same way for more than 100 years

Everyone likes to think now, that they would have supported civil rights? I suggest those that complain about #BlockadeAustralia wld not pic.twitter.com/q9hhxfSyBB

Significantly more concerning than people being late to things is the fact that scores of environmentalists have been arrested in the past year for protesting, a fundamental right in any functioning democracy. In Newcastle, a man was sentenced to a year in jail for disrupting a coal train. This week, NSW Police’s adolescently named “Strike Force Guard”, wearing camouflage and hiding in bushes, arrested dozens of Blockade Australia climate activists.

In Tasmania, the state Liberal Government is introducing anti-protest legislation that will increase the fine for obstructing businesses to $8650 or a one-year jail sentence. In NSW, a recently passed law means anyone convicted of illegally protesting on roads, railways, tunnels or bridges can be jailed for up to two years or fined $22,000.

Police re arrested our client today, climate protestor Mali Cooper, as she was driving to Lismore around midday. Police calculated that she would be in breach of her bail as she wouldn’t arrive in Lismore by evening. Oh Pleeease! Sorry Mali, in their cold cells again tonight. pic.twitter.com/4VSV2bE7T0

In Australia, a land governed by fossil fuels and two political parties that take alternating shifts advocating for them, it is significantly more legal to destroy the climate than it is to protest the climate’s destruction.

And with a mediasphere and legal landscape devoted to capital and carbon, with protestors being locked up, with cops silencing dissent, with deranged dribblings spattered across frontpages and airwaves, new Environment Minister Tanya Plibersek can get away with saying that opening new gas plants is consistent with combatting the climate crisis (it is not), like she did earlier this week. Very few will pull her up on such nonsense, or point out the contradiction of saying so in the same week she told the United Nations the environment is “back front and centre”.

Blockade Australia is not trying to convince the motorists caught in traffic; they’re showing strength to the powerful. Tactics like blocking roads, stopping coal trains, and non-violently halting environmental destruction are reminders that the cogs of capital are ever susceptible to a few strategically placed spanners – that the public can always fuck shit up if they’re motivated enough. And right now they seem plenty motivated. It’s important for our future that groups like Blockade Australia and Extinction Rebellion, that people like Greta Thunberg and Bob Brown, that brave activists willing to pay the price, stay this motivated. We need them.

Why the ALP should DLP the LNP
Help us bring you the good news
Our writers can't be paid in exposure, but they sure can die from it. So if you like the stories on The Shot and would like to become a supporter, we'd welcome the money. Just $1 a month is enough for us to keep publishing stories.
Support The Shot
Sick of this notice? Click here to never see this bar again.
Do NOT follow this link or you will be banned from the site!