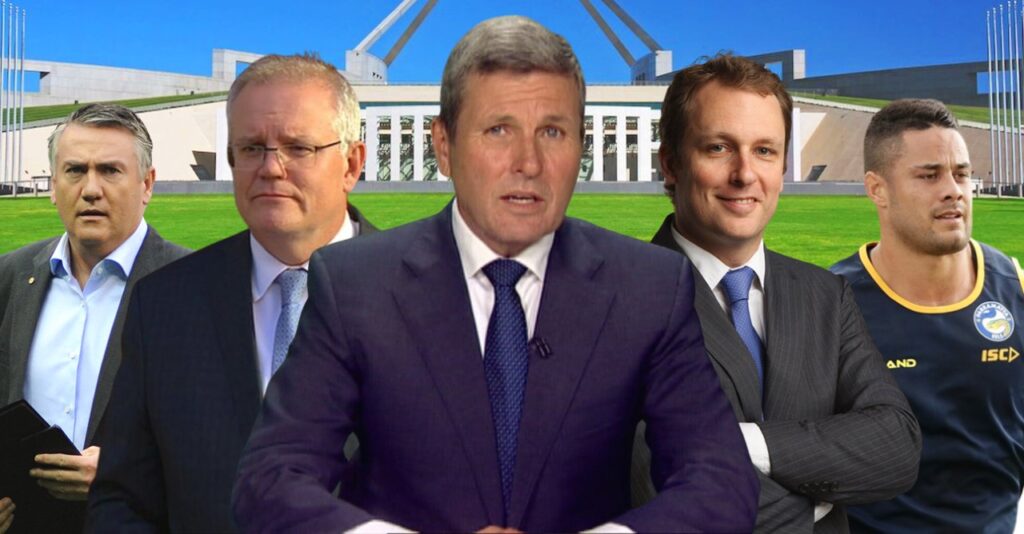 For months, Scott Morrison, part of a statistically insignificant cohort of vaccinated Australians, has been desperate to move Australia’s national conversation on from the sexual assault/wank desk era of his Prime Ministership. That he has finally managed to clear at least some air this week by bungling the nation’s vaccine rollout is both a testament to his Government’s mediocrity and the tenacious work of the fearless women reporting on politics in Canberra.

But this clearly won’t go away for long. We are now two months into rolling news coverage of alleged sexual abuse inside the Government and definitively proven cover-ups of said alleged abuse. Whether the Prime Minister is uninterested or uninformed on the matter of sexual assault in his workplace, repeatedly claiming the latter, matters precisely sweet fuck all. He is the Prime Minister and it is reasonable to expect him to know and do things.

In refusing to even prod at the rape accusations around Christian Porter, shuffling him instead out of the spotlight into a quieter diocese, Morrison has sided with the world as it currently stands: a place where one in five women are sexually harassed and basically all rapists get away with it – particularly powerful ones.

Jenny, the nation’s anecdotal conscience, has at least made some progress on humanity’s behalf here, breaking through the dead eyed stare and American Psycho moral compass of her husband; painting a picture for him, crayons and Clag presumably strewn across the carpets of Kirrabili House, that rape is bad, and that his own daughters, who happen to be women, could somehow be impacted by it. For a man that has so internalised the worthlessness of the lives of people different from himself – an essential part of being a neoliberal and continuing to function – we should probably take this as a small victory.

With his newfound clarity and perspective, the PM contributed positively to the March for Justice by not shooting the protesters outside Parliament House and boasting about that. As far as internalising the sage advice of a respected mentor goes, this is the equivalent of Luke Skywalker telling Yoda to go fuck himself.

As news broke of the Parliamentary Wank Desk – a fantastic title for a paperback Christmas thriller – Scotty accused a lippy journalist of being from an equally rapey workplace, derailing his teary televised mea culpa, the stage-managed image of a man that finally “gets it” sabotaged by the fact that he clearly doesn’t.

Scotty has repeatedly messed up his grand pivot to whatever else it is unambitious men like him want to talk about: the men in the press gallery desperate to help him out, the women pushing back.

And it is basically just the women leading this charge, isn’t it?

The contrast is stark, depressing, but not terribly surprising. From Samantha Maiden, Louise Milligan, Lisa Wilkinson, Amy Remeikis, and many more: journalism so effective that Morrison, a man loath to do things, is doing things. A social movement has been reignited by the stories of Brittany Higgins, “Kate”, and the growing tapestry of misogynistic creepiness from all levels of everywhere. The tenacious follow-through of these reporters has seized the national conversation, forcing Australia into self-reflection, never this country’s strongest suit.

And from the men covering Canberra? Rape apologia and distraction, stoogery of the most embarrassing kind, and a circling of the wagons around the blokes.

Peter van Onselen, PVO, bro, penned a series of columns in The Australian explaining how his good mate probably isn’t a rapist, why his accuser isn’t credible, and how the sheilas are angry without being super clear about what they’re upset about. 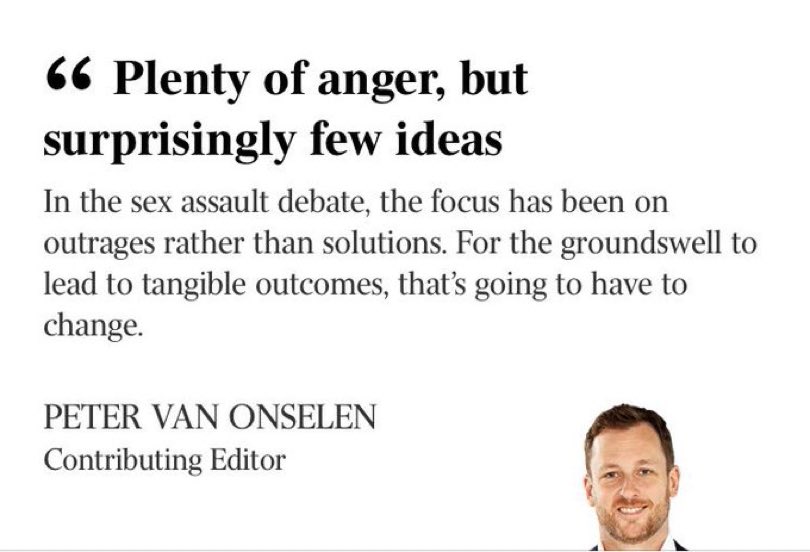 I dunno, man, they’d probably settle for less of this to start with?!

Over at the Australian Financial Review, in a piece titled “PM caught in crusade of women journos”, Aaron Patrick wrote about the squad of female journalists clearly better at the job than he is.

“Angry coverage that often strayed into unapologetic activism came forth from a new, female media leadership… Maiden was probably the most influential, and restrained. Based on copious facts, rather than opinion, her copy was devastating.” Australia’s broader media landscape has never known a power structure it couldn’t suckle from, and the idea that holding negligent, potentially rapey men to the barest minimum standards of accountability is somehow an “opinion” and not the basic job description speaks to this fact.

Elsewhere, high-profile male picture bylines took up the Coalition’s call for distraction, the eternal refuge of the corrupt and depraved: satanic moral panic. Scotty blamed Twitter. Peter Dutton went even deeper into the playbook, setting the tone to follow, blaming the nation’s cruelty on Grand Theft Auto and video games, not once mentioning the offshore kids gulag he so enthusiastically managed until this time last week. 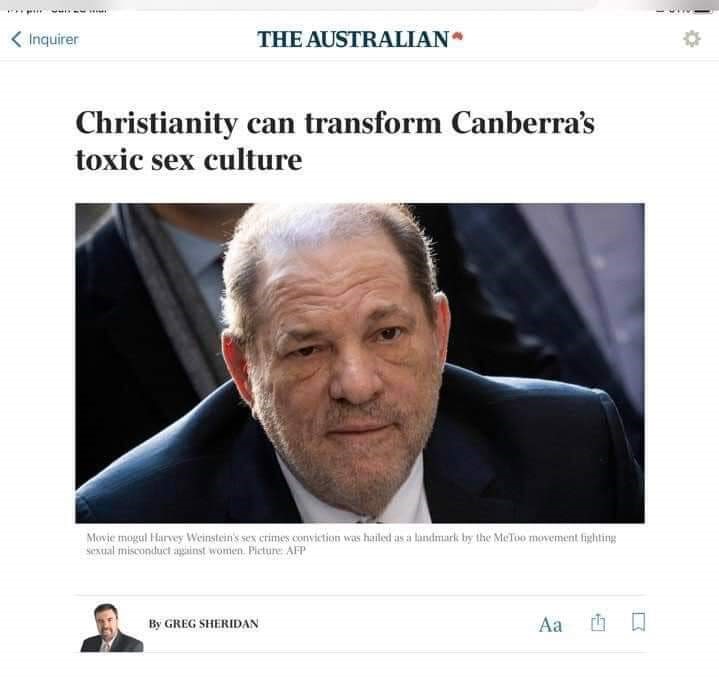 “The last time humanity tried living out a pagan culture it was pretty ugly,” he wrote with the specificity of someone clearly just making things up. “Relations between the sexes were terrible. The chief victims were women and children.” Blessed be the fruit.

Greg’s confused sequence of words is perhaps best understood in the context of the purpose of his entire job: pointing to things that won’t work, pretending they will, and hoping no one notices enough to do anything about it. It will be a tough day when he fires up Netflix, clicks on Spotlight, and accidentally discovers the Catholic Church.

Chris Uhlmann, as enthusiastic about Coalition talking points as anyone, jumped aboard, writing in the SMH: “The godlessness of Australia is often celebrated by those whose main interest in the past seems to be toppling statues and ransacking textbooks for thought crimes.”

In Uhlmann’s worldview, this moment is a “woke” reaction against “thought crimes” – not a modern civilised response to things that don’t sit quite so well anymore. Things like slavery and now apparently rape. Real problems can forever be ignored when there is a culture war to pretend to fight.

“We once searched for ways to unite our multi-racial project but now there is a determined effort to shatter it into permanently aggrieved identities pitted against a straw-man past,” he opined, stupidly.

This disingenuous argument, repeated ad nauseum by unconcerned, privileged voices has always been a barrier to a better, fairer future. The idea that the injustices of our past have been adequately dealt with, and that by extension everyone else should just stop complaining about everything, is a fallacy. It is as ahistorical and counterfactual as the history books I read as a child that described the genocide of Indigenous Australians with euphemisms like “silently disappearing into the bush”.

Australia’s Howard-engineered project of ignoring historical sins and chillaxing with the cricketers has collided with the lived reality of Australian women. The great conservative forgetting project is reaching the end of its viability, and I wish I could say the same for Uhlmann.

But just as this isn’t really only about Canberra, it’s also not only about the journalists.

After months of witnessing an endless line-up of traumatised survivors of sexual assault and the PM’s craven response to it, his approval amongst women has plummeted by 18% since November 2020. The polls are fairly clear on this: women are less than thrilled about all the rape. The men? Not so much! Male approval sits unchanged at 65%, no amount of cover ups and wank desks having any bearing on popular sentiment. Could we maybe get Jenny on a Zoom call with the rest of us?

And thus the strategy back from oblivion becomes clearer for the Coalition: THE BLOKES. Australian Prime Ministers have always used sport and beer to humanise and wash away image problems, the most reliable cleansing move in the playbook. Go Eels!!!!!!???? ….

Young women have found countless, fearless, furious, kickass role models over the last few months, all while the men around them have squirmed and tried to excuse the inexcusable. Tahleya Eggers’ brutal death glare in the Parramatta Eels dressing room continued the  trend proudly. 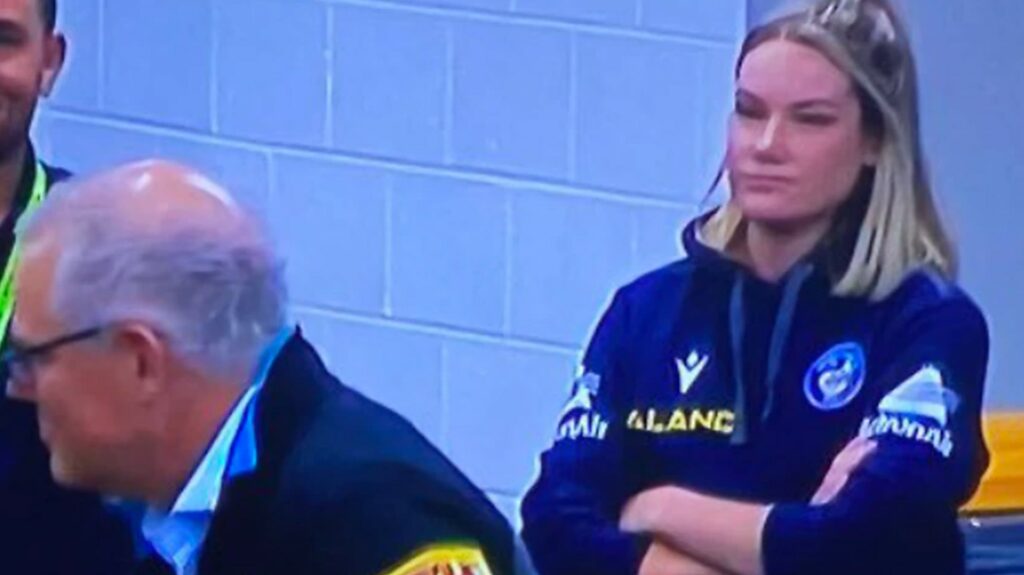 In the face of astonishing pressure, she owned the moment too, explaining on Twitter: “I will not respect a man who has the time to shake hands of men who have won a football match but is ‘too busy’ to attend the March for Justice.” A more genuinely badass moment than anything happening on a football pitch.

And the dudes inside the same room? 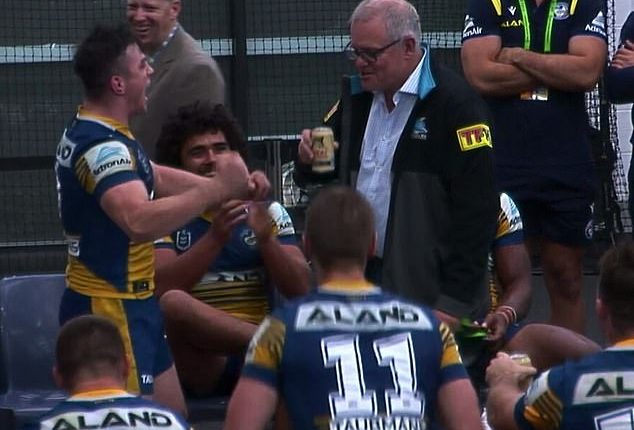 We are witnessing a societal shift, and Australia’s young men deserve better role models than our press conference of a Prime Minister, than our stoogey male journalists, and our blissfully clueless football players. The polls show we clearly need them, too.

“Not all men”, sure, to get the belly rubbing disclaimer out of the way, but certainly these men.