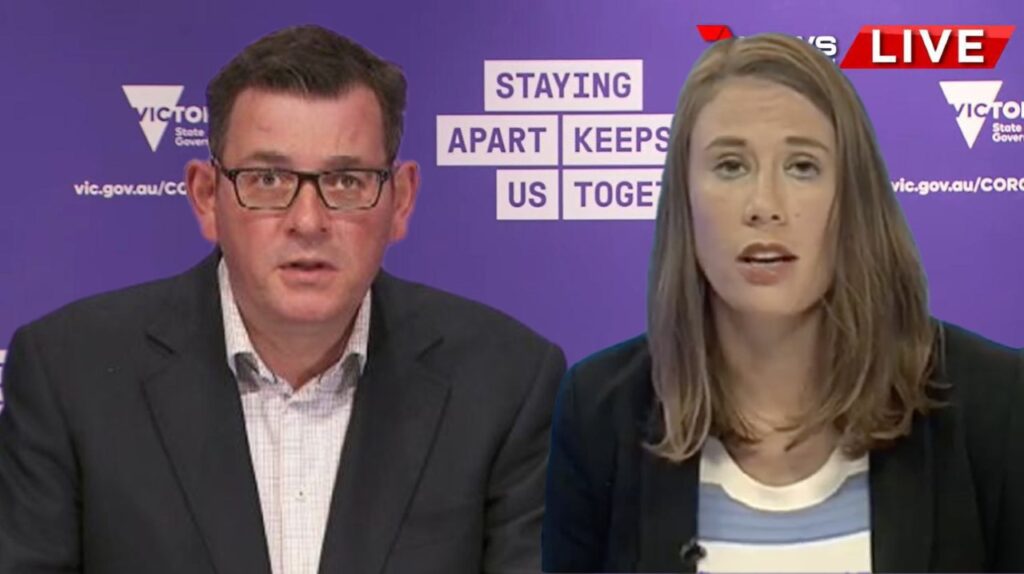 “Everybody right to go?”

Not even a little bit man but what else are we gonna do?!

I’m well aware the Premier is talking to the assembled journalists as well as the Murdoch press but, like seven wines on a Tuesday, I’m not above yelling at the TV nowadays.

I also genuinely believe the TV deserves it.

100 episodes. That’s an achievement for anything on TV, even something this awful. It’s a shared community ritual now. A rubbish one. Melbourne’s least comforting source of comfort. The sourdough starter of Lockdown 2.0.

In the absence of everything else, the presser has become Victoria’s crappiest water cooler show. Or it would have if we still had access to water coolers. It’s the talking and walking in the park show. Where once we had life glorious life, now there’s just the suit, the North Face, a purple backdrop THAT I ABSOLUTELY HATE for reasons only generously described as reasons, and up to two solid hours of pure frustration for everyone involved.

(Except Brett. Unflappable Brett. That beard. Papa Brett And The Curves, that’s what I’d call my next band. Well aware I’m losing it here but I just have to ride this out now.)

“Everybody right to go?”

Absolutely not but get on with it please.

100 days standing before the people and the press, speaking calmly, evasively, sheepishly, but mostly just clearly and unbelievably patiently, bearing bad news and terrible news – and now good news, too – about his state’s successful and then failed and then successful-again response to the coronavirus pandemic.

But that’s the point made by the mastheads behind the daily questions, isn’t it? Not just that he’s a dictator, but that he’s a bad dictator. He rules with an iron fist except for all those moments when he should have ruled with an iron fist. Schrodinger’s dictator. Dictator Dan and his dictatorial desire to dictatorially stand before the public and press, 100 days in a row, to talk about how his government messed up and what they’re doing to fix it…

I’m clearly not the target audience for this style of reporting, but I cannot help feeling that if I was a conservative I’d be furious with my newspapers for thinking I was this stupid.

Few things annoy me more than meek centrism so I’ll try not to make a habit of this, but both sides of this divide – one that really shouldn’t be a divide by the way – have valid points.

The impulse to be a hardass at a press conference is not a bad one. It’s healthy, and good for democracy. We need fearless journalists or we’re truly screwed. If they can get to the bottom of what went wrong here, without fear or an agenda beyond the truth, then we’re all better off.

What’s unusual, this time, is that a huge chunk of the state is watching along live with the journalists. Unedited. We’re seeing the process along with the product, and realising for perhaps the first time how frustrating and petty sausage-making actually is.

That’s not on the journalists. That’s on the audience. The journalists are not there to make friends – with the government, or with us. Everyone should just accept that.

Contrary to the defensive, rally round the family with a pocket full of tweets attitude of much of the press, that’s not the only thing happening.

There’s an abundance of bullshit. A cacophony of stupid questions. Stupid lies. And so much moaning about all the stuff the rest of us accepted months ago because we know it’s the right thing to do on behalf of the entire country.

Shut up about the masks already! It doesn’t help! Masks are annoying, but they’re not that big a deal. I bought a bootleg Simpsons one the other day. It’s pretty cool.

And then Alan Jones and members of the Victorian Liberal Party swarmed to her defence, and the rusty machinery of the privileged was trotted out yet again, just more obviously than usual, and less effectively.

The crucial difference this time – once again – is that a huge audience of bored, angry, depressed people with a personal stake in this are watching along live now. Not only seeing how the sausage is made, but how it’s poisoned, how the end product isn’t really a sausage at all, and many people are going to become life-long vegetarians because of it.

And do you know what’s even worse than the lies? The solidarity with the liars. Because we all know Murdoch is gonna Murdoch. What’s worse is other journalists offering their hands in the name of civility and moral victory. There’s just too much at stake. I’m not even sure it’s all that moral, and it’s certainly not a victory.

Journalists do not owe solidarity to the people undermining their field from within. It’s self-defeating.

If fed up people call out stoogery online, journalists should let them. Because deep down they know it’s deserved. They don’t have to say anything personally – we’re all well aware that everyone needs to pay the bills and 70% of media jobs in Australia belong to He Who Must Not Be Named – but they don’t owe stooges their neck either.

Again, there’s just too much at stake. And not just with this pandemic. With everything. We’re blessed in Australia with constant warnings from the future. Have you seen America recently? The UK? They’re just a little further down the same road we’re on.

And, preemptively, if I’m criticised for attacking a hard-working woman just doing her job – and she is just doing her very specific job quite well really – do you know who really needed your professional solidarity? 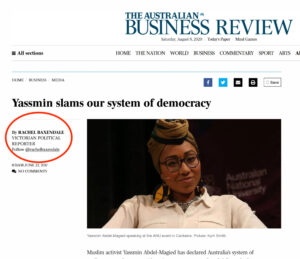 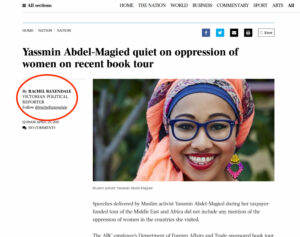 This poor woman that Rachel helped drive out of the country.

Where were you then?

Anyway, no TV show is only about its villains. And 100 episodes is a big milestone. There’s only 73 episodes of Game of Thrones! Man I hope this has a smoother ending.

The good episodes even have some laughs, like when ABC Radio’s Raf Epstein got that de facto one-on-one interview because everyone else was asleep and he just ran with it. That was cool.

Or when the Premier explained how sex works.

.@DanielAndrewsMP explanation to a reporter as to why intimate partners don’t need masks during lockdown, is something I didn’t expect during covid pic.twitter.com/sK1jX0vfWx

That actually is something a dictator might have done, to be fair.

You don’t have to watch every episode. I skipped a whole season during those few weeks we were allowed outside. But it’s still easy to pick up on the threads…

The worst episodes can make you cry, though.

The tower lockdown. Vertical cruise ships for poor people, just more unfair because no one had a choice, and everything is more unfair for poor people. Heartbreaking in what it meant for our most disadvantaged neighbours; chilling because of what we all knew deep down was coming for the rest of us. We couldn’t admit that at the time, though.

The area code lockdown. That entire arc felt like filler, tbh. Learnt a whole bunch of new suburb names at least (Tottenham?!). Streets divided in half, one side allowed out to play, the other doing what we’re doing now just weeks and weeks and weeks earlier. We knew that wasn’t going to work as well, didn’t we? Foreshadowing so hamfisted Aaron Sorkin could have written it.

And July 7. July 7. The “You’ve got two days, sort your shit out because we’re doing this again, please don’t hoard toilet paper” episode. That one actually didn’t make me cry because it was my birthday and I’d gotten on the beers (safely, at home, leave me alone, dictator).

But I won’t ever forget it.

Or the 59 deaths day. That one still hurts. They all do, really.

The worst episodes can make you cry.

But the best episodes? We haven’t seen them yet, but they’re coming.