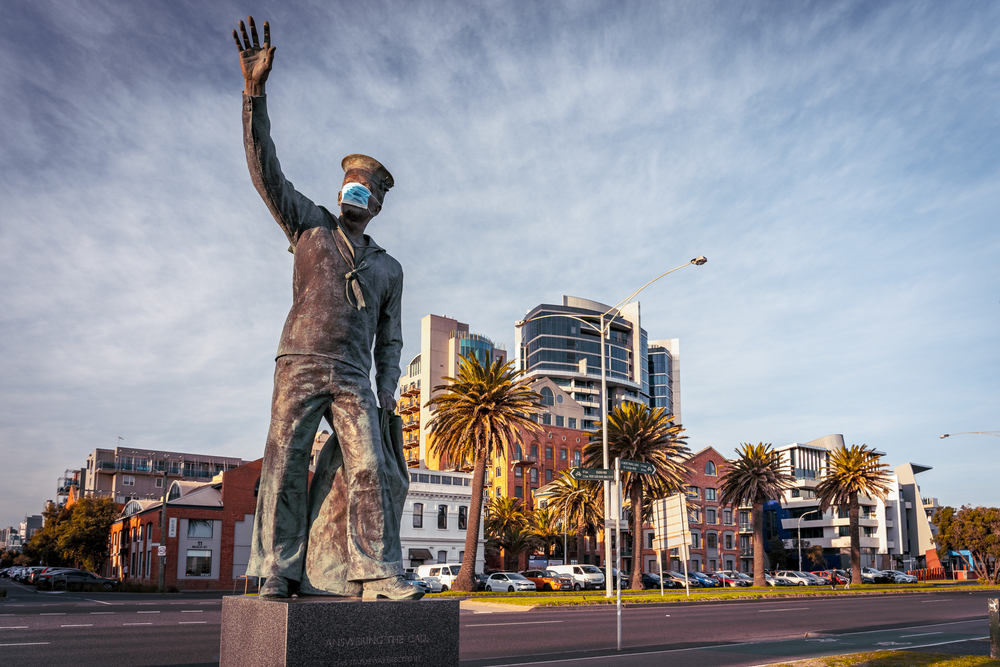 One of the useful but also messed up traits of being human is we can get used to almost anything. Sooner or later it just becomes your life.

Weeks, maybe months, who knows anymore, into the world’s current strictest lockdown, that’s happening. Things have been so weird in Melbourne for so long we’re forgetting how weird they actually are.

I think I’m forgetting how to drive. I haven’t done it in months. You can’t travel further than 5km from home anyway, and if you walk to the shops you get bonus outside time on top of the legally sanctioned HOUR. I might not renew my rego.

People are starting to talk about “The Fog”. A state of mind that’s basically the opposite of a state of mind. Without people to bounce thoughts off, it’s hard to know what we’re really thinking, what we really believe. Inner dialogue is the only dialogue.

I’m not sure how the mail works anymore. Some things arrive in two days, other things in six weeks. That’s fine, too, because I don’t really know what six weeks means anymore either.

Because time doesn’t work. In the moment, days last months. Afterwards, in hindsight, without any markers to track the flow, months feel like they’ve lasted days. I’ve done three things this year. Two if you count going to different parks as the same thing. It makes sense that I can’t tell August from July, but fuck me is that a weird sensation.

And then our foggy, vulnerable brains are being assaulted with all the batshit bloodlust at every turn.

Sky News, The Herald Sun, and a barrage of breakfast TV personalities, each stupider than the last, keep saying more of us should just die.

Perhaps not me personally, or anyone personally for that matter – just faceless numbers that don’t count so you can get away with openly advocating for more death – but it’s still hard not to feel a little mortal about it all.

And then some doctor fuckwit with an amazing jawline who isn’t Brett Sutton so I don’t give a shit about him tells us to make our beds every morning. Get fucked mate.

Most importantly, a growing number of people think we’re living in a totalitarian dictatorship. We’re not, but it is weird that people think that.

It’s strangely unsettling realising your neighbours are starting to go a bit nuts. And not just the weirdos – genuinely normally not-nuts people are fraying.

Most of this “Dictator Dan” talk is clearly opportunistic, cynical politicking. But it is getting through to some people. And that’s weird, watching resolve die, seeing the hinged become unhinged.

Because there’s perfectly good reasons to be furious with what’s happened here, but deciding we’re living through a dictatorship instead of a fucking pandemic doesn’t really tick that box.

The genuine believers aren’t being hyperbolic, either; they genuinely think that’s true.

Try to put yourself in that mindset. Imagine, on election Day, in Melbourne, democracy sausage in hand, tomato sauce dribbling down the frothy sides of your mouth, genuinely believing the guy you’re voting against in a free and democratic election without any negative consequence whatsoever, while holding a fucking sausage, sauce just soaked all over your “5GTruth.org” T-shirt, is a tyrannical dictator.

(Everyone knows real tyrannical dictators tend to only have one outfit. Our guy has two.)

How would you function genuinely believing all that? You’d be terrified the entire time. You wouldn’t go outside.

(Bad example, but you know what I mean.)

Most of the once-sane-but-now-not-quite crowd in my social circle are either swing voters or supporters of the Liberal Party, so they’re already predisposed to believing anything casting a Labor stalwart as a villain.

But there is a line between voting Liberal and voting Liberal while also being nuts. It’s thin, but I maintain it’s there. And it’s being crossed more and more.

I’m seeing friends actively seeking out conspiracy theories to believe in because there’s comfort in them. They make the world make sense.

And the most appealing thing about these conspiracy theories? These frameworks remove cruel randomness from the world – everything awful happening is by design. Randomness is far scarier than any nerd-ass-looking boogie man dictator.

And my god man we’ve experienced enough randomness for now, thank you very much.

Dictator Dan conspiracies have grabbed people I went to high school with, my friend’s parents, a well-known musician I know, and the guy that drops 5G pamphlets in my mailbox every now and then. It’s not an endless list, but it’s longer than it should be.

It should really just be the pamphlet guy.

But we will be.

Because in six, seven, nine weeks – whatever that means!?! – however long it takes to squash this cunt of a virus back down so people can stop dying and we can go outside again, none of this will matter.

We’ll feel proud we beat this virus twice. We’ll be more unbearably Melburnian than we ever were before.

There will be political repercussions, absolutely. There will be anger, too, but hopefully in proportion to reality. The “Dictator Dan” thing won’t go away, but the once hinged, once sensible will just quietly delete a few old tweets and go back to being reasonably pissed off.

Maybe I’ll even pay my rego and learn how to drive again.