Well that was a bit intense. Lockdown 3.0, a radio edit remix of Melbourne’s accumulated PTSD triggers. Masks. The eerie silence of this particular type of solidarity. The Daily Dan Show. Roads no longer capable of taking us anywhere. ALCOHOL and ETC. The severed connections of this devastatingly familiar life.

Yes, only five days, a blip in the grand scheme of what 6.5 million stoic warrior Jedi viking ninjas have already copped – but the damage is cumulative, the wounds constantly salted, and not a single soul in Melbourne did anything at all to deserve this. Not one. Not again. Not now. And yet…

We got to re-experience our trash-tabloid soiling its bunk bed and soaking through its Liberal Party doona spreads, this time with the gusto and diuretic pacing of Game of Thrones season 8. Eight months worth of laxatives ingested over a five day window of discontent sowing, millions showered with the resulting effluent. 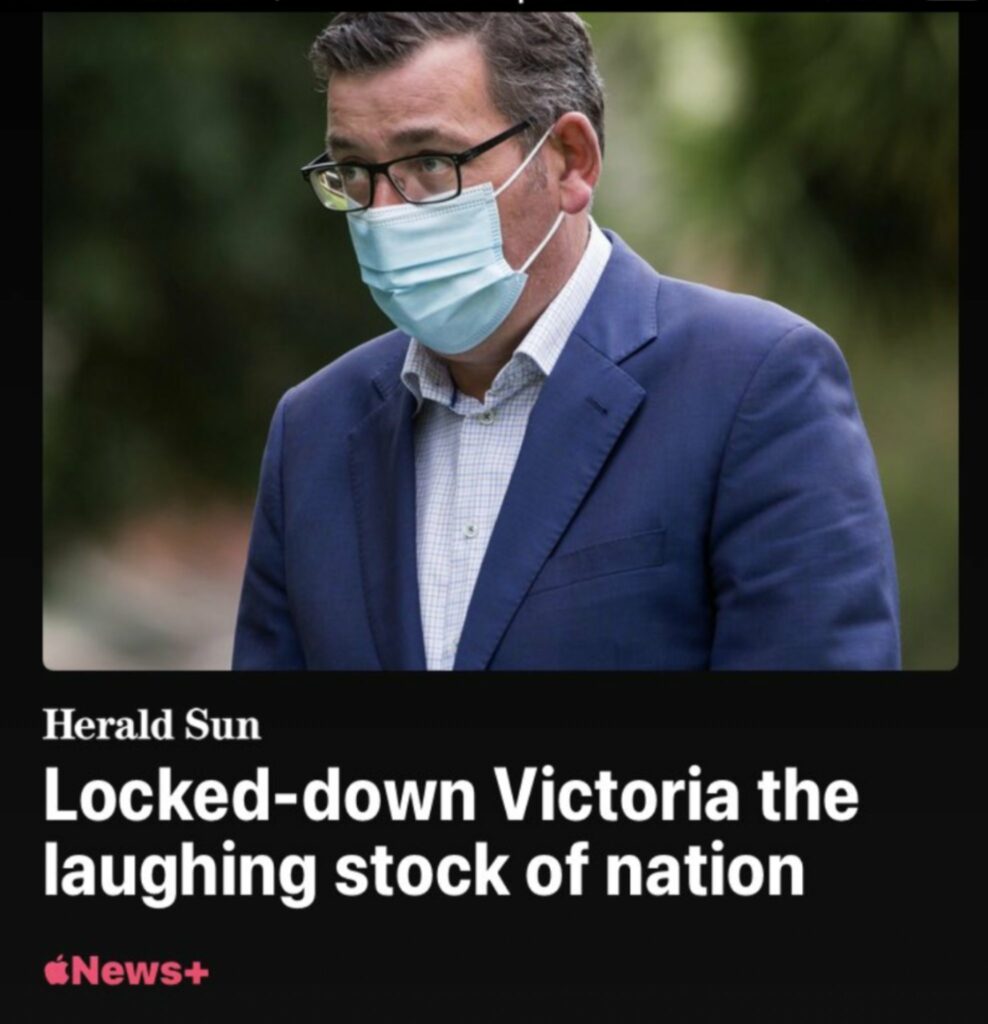 Are New Zealand, WA and Queensland also laughing stocks for their incredibly successful snap lockdowns, or is that still just us? This is undignified. Petty. It’s hard to look past the fact Melbourne is more immune to Rupert Murdoch’s tabloid tantrums than any city since Liverpool, and that is clearly why they despise us so much. I sincerely hope this quasi-newspaper’s violent, moronic death throes don’t drag on much longer.

Just imagine being Brett Sutton. The “CHOttie”, unlikely calendar model, recurring cameo in this state’s thirstiest ongoing fever dream. A well respected, highly qualified public health official who, during a deadly global pandemic, needs to spend a borderline unjustifiable chunk of working hours in front of a gaggle of political journalists with the combined retention capabilities of a solitary goldfish.

And then imagine, on top of all that, standing there day after day, forced to listen to those political journalists (do we have any health reporters left???) urging your boss, Fidel Danstro, Despiser of Liberty and Prosperity, to ignore your expert health advice.

Brett, you have decades of medical expertise and relevant experience, but my background as a neoliberal footsoldier with links to the Liberal Party says this lockdown is unnecessary – and so on, eternally, apparently, until the heat death of the universe.

All for the end result to look like this… I wouldn’t handle this as well as Brett does. Lockdown 3.0 was only five days long and I still stocked up on chocolate flavoured cereal and wine, my coping mechanisms kicking in as quickly as this state kicked back into corona stomping mode. We can add “unflappable” to the shared imaginary CHOttie Tinder profile.

GarbageBagGate was a tonne of fun! A bin bag worn over a head, NewsCorp implying in both The Australian and The Daily Telegraph that this is standard PPE in the freedom-despising regions of the Peoples’ Republic of Lockdownistan. In reality, this poor quarantined person was bagged up trying to protect their identity from exactly this type of bin-liner newspaper. It’s almost ironic.

We bore witness to some lovely mask slipping moments as well, literal and metaphorical. The Herald Sun’s James Campbell asked the Premier why we should “care” when currently “no one is dying”, displaying not only a callous disrespect for the normal-ish life everyone sacrificed so much to claw back last year, but also a dumbfounding lack of understanding about viruses in general, coronavirus in particular, and how they tend to spread from person to person. 2.4 million global deaths later, this should be a relatively well understood point by now.

The Melbourne lockdown is only five days? The 'Herald Sun' gang are going to have to work fast to undermine this one.

They did work fast, Tony! It was absurd. This bit was fun at least.

Michael Jordan resigned, so why not Batman!? You can link any two things. Tim Cahill hung up his boots, so why not Rupert Murdoch? This op-ed by Jeff “I sold the state’s purpose-built infectious diseases hospital in 1996” Kennet is a glorious own-goal on the part of The Herald Sun. This is an extraordinary city, a beautiful state, much of it is still stressed and exhausted to the point of collapse. And yet here we are again, called upon to step out of retirement and return to our violent past for one last murder. We are the John Wick of staying at home and inventing cocktails on a Tuesday night. The Curve Killer, global heavyweight champion, The Terminator to coronavirus’ T-1000.

We know far too well the feeling of millions working on the same all-important project, doing the same basic thing, often at great personal cost, for the overwhelming greater good. Our more unhinged Herald Sun-absorbing, science-denying, libertarian cluster of perpetually miserable pricks is both relatively small and significantly safer to ignore than coronavirus. NewsCorp’s relentless assault on our values, our humanity, our kindness and community mindedness will not work here.

Could we PLEASE get better at this fucking quarantine thing, though?!? Have we tried the old timey solutions from the pirates and scurvy era where you isolate people away from dense population centres and pay staff to live as safely as possible among the afflicted – instead of having them come home each night and hitting Bunnings each weekend?

Do we need Scott Morrison, ever reticent to do things, to do things? Is our Plan B, hastily assembled by all the state governments in the face of the Prime Minister’s desire not to be responsible for much beyond bathroom renovation grants, still the best we can manage? All these months and deaths later.

Peta Credlin’s role of champion of the proles, fly-in liberator from Sydney, was recast without explanation. Like the second aunty from The Fresh Prince of Bel Air, the ABC’s Leigh Sales apparently slipped right in. Having been denied an interview with Dan Guevara for 7.30, she was perceived by many as having co-opted a significant chunk of the public-facing time of our health officials, during the middle of a health crisis, for content and a line of questioning Victorians have had more than enough of.

Much of the internet was unimpressed with her performance.

Hi Leigh, whilst you’re in 14 day quarantine will Laura Tingle be hosting 7.30?

When backlash of this type occurs, and it does often nowadays, the journalists involved tend to claim the public just doesn’t understand how journalism is made. “The unwashed masses not getting it” defence. The stans. The drips.

But if that is true, it is certainly not the only thing that is. This is a unique moment in time, and it’s more than reasonable to think Melbourne’s public have adjusted to it with a deeper level of understanding than Sydney’s media.

This is actually a turf war between journalists and the residents of this state over the invaluable public-facing time of the people in charge of our response to this health crisis. For Victorians taking this pretty fucking seriously, Sales’ approach didn’t feel like she had our best interests at heart.

For the people that live in this battered state, this is a health crisis first and foremost. Politics, if anything, gets in the way. It doesn’t help, and we are collectively, at our core, all about what and who is helping. In these moments of crises, we’d ideally just like all the information we need to get through each nightmare redux as quickly and safely as possible. Support and encouragement would be nice, too, but at this point we’d settle for slightly less of this deeply embarrassing campaign to convince people elsewhere that Victoria is a tyrannical communist dictatorship with a cowed, indoctrinated citizenry just begging for a heroic journalist to free us from the shackles of not having coronavirus in this state.

For the people reporting on our lives, this is predominantly a political soap opera. A red versus blue football match that much of our media not only framed in this reductive manner, but then also spent the entire time cheering for the blue side (the red team just so happens to be the one currently tasked with keeping us alive). WOW I WONDER WHY THERE’S A BACKLASH?!?!

It wasn’t all negative, though. Sales received glowing reviews from Gideon Rozner of the IPA, Gina Rinehart’s blue sky fuckwit mine.

And similar praise from Adam Creighton of The Australian, the human I most suspect of secretly being a vampire, almost certainly swilling the blood of the economically insignificant from a grandma-skull goblet while he tweeted this.

A follow-up the same day did wonders for this professional reference.

Make of this what you will. Australians have long feared the ABC becoming exactly what the Liberal Party is trying to turn it into – a fairly reasonable concern in my opinion. And if Leigh Sales found her less than enthusiastic welcome into our local shitshow surprising, the context here holds all the answers. She is of course entitled to ask and pursue any line of questioning she likes, as she should be encouraged to do so – but we are a tired, traumatised people, and, crucially, none of this shit actually helps us.

The Andrews Government has made its position on keeping a bit of the virus around, ostensibly because it’s good for the economy, pretty clear. The medical experts here, without being too reductive, think that’s a stupid fucking idea. They also believe that B.1.1.1.7., this more contagious “UK strain”, despite Skeletor’s tweet above, is something we should be cautious about.

Given overwhelming evidence from across the world that the “open up and live with the virus” philosophy generally leads to significantly more death, more decimated economies, and now mutant super strains having given the virus a petri dish of humans to experiment with, it’s extraordinary that caution is considered a controversial position in Australian media.

The last lockdown ended in an informal state-wide piss up that many of us dragged out for weeks (ok, months). Lockdown 3.0 was an underwhelming sequel, redeemed only by its short runtime and distinct lack of death.

It was too soon. Millions here are still papering over the cracks of a March to October spent surviving, coping – and not. We are frustrated, depressed, angry millions; struggling businesses and industries; strained relationships, sleepless nights, and tortured souls.

We did not need this. But we stepped up, once again, on behalf of the entire nation, and the nation’s media shat on our will and our efforts once again. Everyone that contributed to this pile-on should be deeply ashamed of themselves. If public interest journalism has an antithesis, a mirror universe evil version, Victoria has seen far too much of it firsthand.

We were on the country’s side yet again. Why was so much of it not on ours?