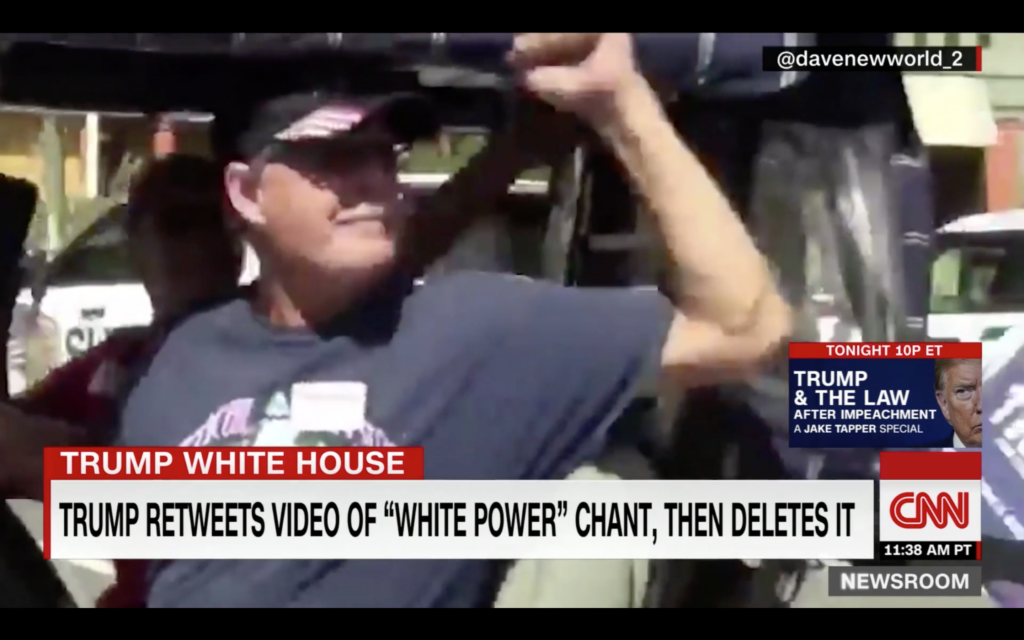 Everyone loves Sunday mornings. It’s the perfect time for a lie in, some music, maybe a cooked breakfast, and, if you’re the President of the United States, signal boosting some white supremacy for your 82.5 million followers.

That’s what Donald Trump did just a few hours ago, when he shared a video on Twitter of his supporters at a retirement community in Florida known as The Villages.

In it, an elderly MAGA couple drive past a group of anti-Trump protestors in a golf cart. After one of the protestors calls the man in the golf cart a “racist”, he responds by yelling “white power”, twice, fist raised, before driving on past at a blistering 8-15mph.

Accompanying the video, Trump tweeted the caption: “Thank you to the great people of The Villages. The Radical Left Do Nothing Democrats will Fall in the Fall. Corrupt Joe is shot. See you soon!!”

The tweet was left up for nearly three hours before being deleted, but the video is still available on CNN’s website.

Asked for an explanation White House deputy press secretary Judd Deere provided the standard denial dog whistle: “President Trump is a big fan of The Villages. He did not hear the one statement made on the video. What he did see was tremendous enthusiasm from his many supporters.”

Hell, it’s not even a dog whistle at this point – it’s laying a trail of dog biscuits in the shape of burning crosses all the way to the polling booth.