General News
Scott Morrison, Andrew Bolt and PVO are providing cultural cover for every rapist that ever got away with it
March 19, 2021 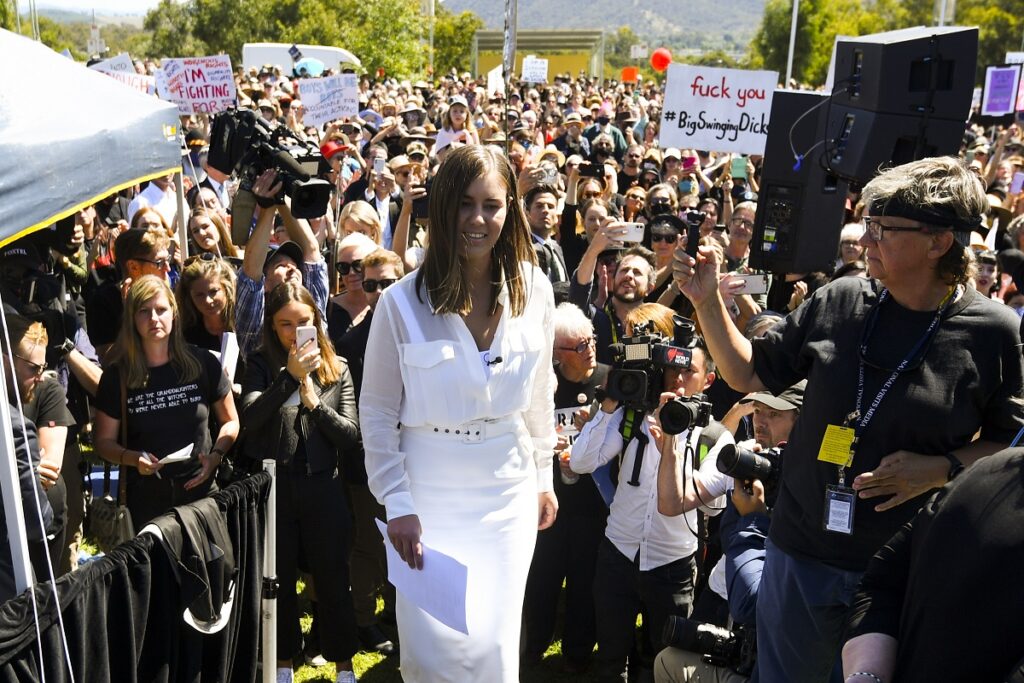 On Monday, women marched demanding justice for Australia’s 2 million survivors of sexual assault. By Thursday a powerful man had asked them to consider an app instead, NSW Police Commissioner Mick Fuller stopping shy of proposing a “tap on, tap off” system for his ConsentSeeker dystopian hellscape project.

When faced with mass calls for powerful men to listen and understand the culture that leads to one in five Australian women being sexually abused, yet another powerful man dreamt up an easily exploitable method of keeping guilty men out of trouble (Mick, consent can change at any time, and if you can force someone into sex, you can probably force someone into using an app).

Such is the joy of living in a country with a national conversation in the gutter, perpetually riled up into a NewsCorp froth around utter nonsense, our collective conscience on life support after decades of voting for gleefully cruel Liberal Governments and apologetically cruel Labor Governments.

But why expect better from anyone at all when the man at the top has set our bar at subterranean levels?

Scott Morrison, in shielding Christian Porter from even a remotely adequate inquiry into allegations against him – whether he did it or not – is positioning his Government on the side of every rapist that ever got away with it. Everywhere and every when. Which is statistically nearly all of them.

Morrison’s actions champion the impunity of privilege, winking encouragement at the complicit silence that forms around powerful rapey men everywhere.

“I am cognisant of all the women who continue to live in silence,” said Brittany Higgins outside Parliament House on Monday. “The women who are faceless. The women who don’t have the mobility, the confidence, or the financial means to share their truth. Those who don’t see their images and stories reflected in the media, those who are sadly no longer with us. Those who have lost their sense of self-worth and are unable to break the silence, all of which is rooted in the shame and stigma of sexual assault.”

At the March For Justice, Australians stood beside Higgins and far too many like her, the New York Times estimating more than 110,000 participants nationwide. On Monday Melbourne’s Treasury Gardens looked like this, mournfully seething. 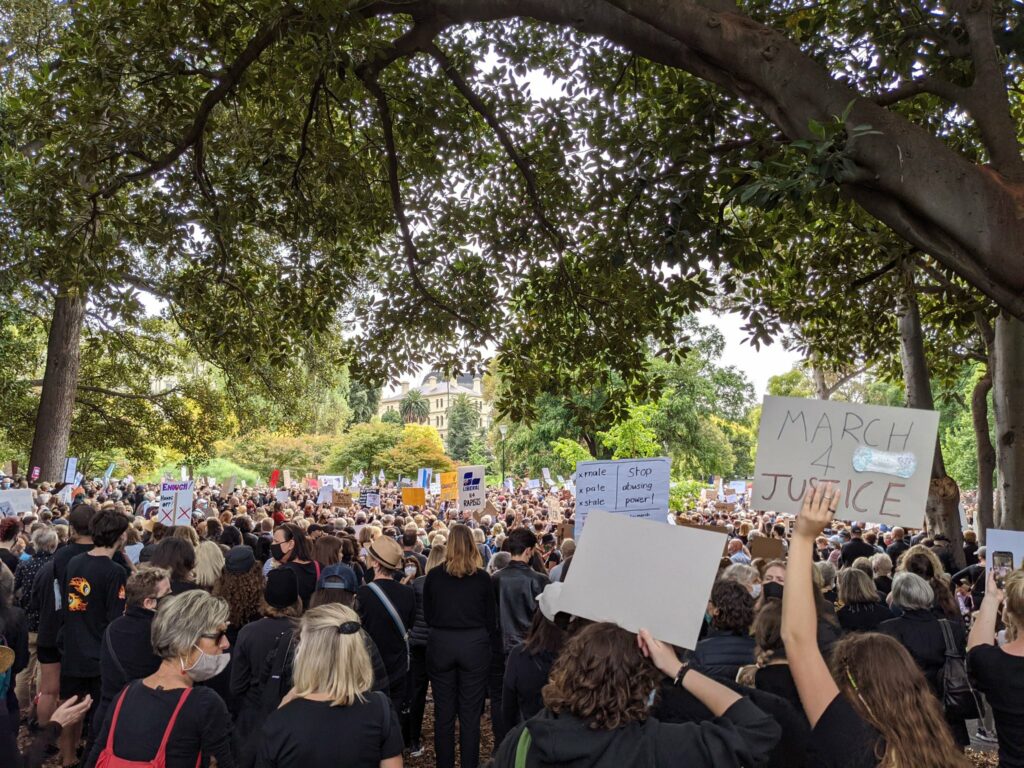 With his Government cornering itself into standing for the rights of powerful men to continue  escaping any consequences whatsoever, somehow under the guise of “upholding the rule of law”,  the Liberal Party protection racket in the press contorted itself into rape apologia, the tools of patriarchy rarely this bleedingly obvious. 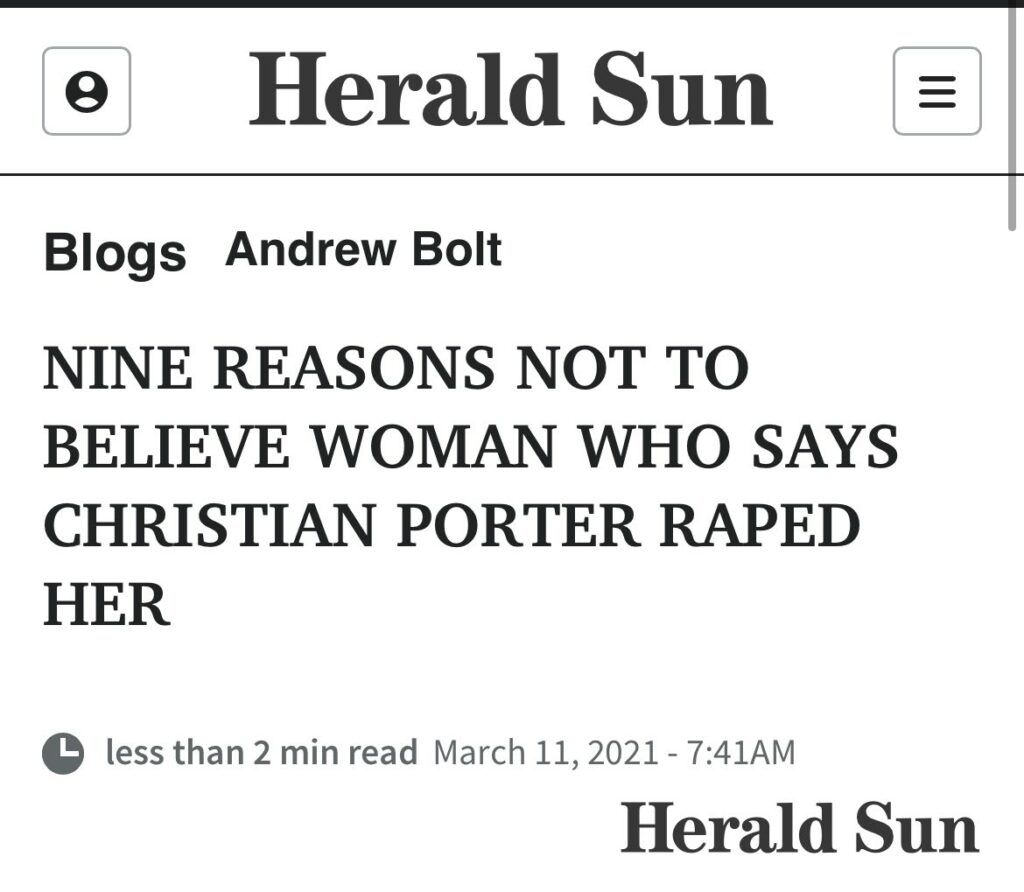 Andrew Bolt has written more words sowing doubt in traumatised rape victims than anyone in this country, NewsCorp’s poison seeping well beyond politics and into our social fabric. He exists to keep real injustice away from the minds of the easily distracted, providing not only the social licence but the script for wretched humans to justify their wretchedness with.

This is why “Fuck The Herald Sun” felt so naturally at home among other placards: “Does my feminist agenda look big in this?!”, “Why the fuck do we still have to do this?!”, and “This is about much more than (that dickhead) Porter”. 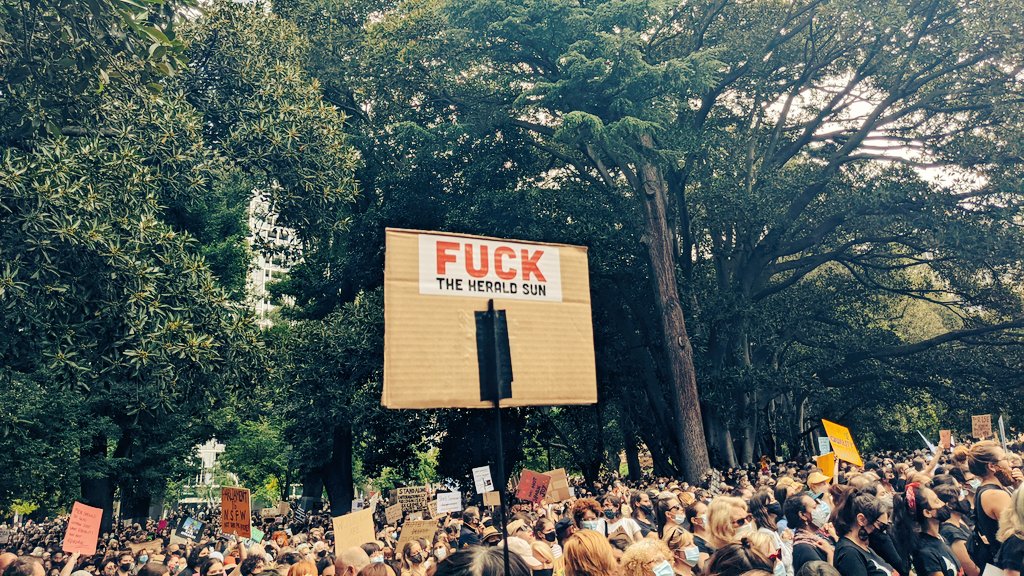 No one expects better from Andrew Bolt. He has devoted his life to making the trodden upon more miserable. But people did expect better of Peter van Onselen.

If The Australian is Rupert Murdoch’s plausible deniability, then PVO is The Australian’s. He’s significantly less bloodthirsty than Adam Creighton, less stupid than Greg Sheridan, and less of a climate change denying homicidal nutjob than all of them. He also doesn’t love Scotty The Vaccinated all that much, proving he pays at least some attention.

He does happen to be BFFs with Christian Porter, though. Ethically, this is less than ideal, but it could still have been navigated, dignity intact, by just shutting the fuck up. He did the opposite, gifting his massive platforms to the campaign for public exoneration of his powerful friend – a powerful man POTENTIALLY (don’t sue us Christian Porter!!) the gazillionth in a long line of powerful men going to get away with rape. And all without any disclosure what-so-fucking-ever.

He teamed with Janet Albrechson to tear into the “chilling” teenage journals of Kate, the woman at the centre of Porter’s fading dreams of one day being Prime Minister, implying her memories of the event were repressed and recovered later by controversial “unreliable” methods. The pair concluded with this, all but spelling out the intent behind the story: “The question readers might now want to ask themselves is does Kate’s dossier raise doubts about what has been ­alleged against Porter?”

This premise is nonsensical. My teenage journals would make me sound unhinged and confused too – and I definitely wasn’t raped by Christian Porter.

No editor anywhere should be giving PVO space to wax philosophical on this. There is a clear conflict of interest. This is extremely basic stuff that small town newspapers in rural America, circulations in the mid double digits, one part-time student journo on the books, edited by men named Herb and Chuck, office desperately in need of a new colour photocopier, are expected to get right every fucking day.

This is our “national masthead”, for fuck’s sake!!

After tweeting out two articles in The Australian attempting to publicly exonerate a man that would desperately appreciate being publicly exonerated, PVO lost 15,000 Twitter followers in two days. He then deleted all his tweets. For everyone concerned about the sanctity of Twitter lore, our shared historical record of nihilism and nonsense, do not be worried: he didn’t have any good ones.

But it is harder to find Julia Zemiro telling him to go fuck himself now.

PVO is of course welcome to his opinion, but if he insists on commenting in the press, his headlines should come with “Why I don’t think my powerful, helpful mate is a rapist, by Peter van Onselen” levels of disclosure.

Scott Morrison’s Government wants to move on, and NewsCorp columnists and shills elsewhere are more than willing to grease the way. And if men in particular are surprised by the urgency and energy of remarkable women like Brittany Higgins, Grace Tame, and Chanel Contos, and by the persistence and bravery of journalists like Louise Milligan, Samantha Maiden, and Lisa Wilkinson, consider this is not a new call for help. It is yet another outburst of desperate activism on this apathetic, amnesiac island, fed fables of its own laid back larrikinism into submission – the fear is that nothing will change yet again when it so clearly must.

There is a great social awkwardness at the heart of all human life in 2021: everyone we know has at some point in the last 12 months expressed opinions on whether other people’s lives are worth caring about. And so many have gotten this wrong, not just the muppets from high school we’re still masochistically Facebook friends with, but the soul of this mediocre, malevolent Federal Government too.

Scott Morrison couldn’t even step outside to face the protesters at Parliament House on Monday. Even Tony Abbot managed to face his adoring public. 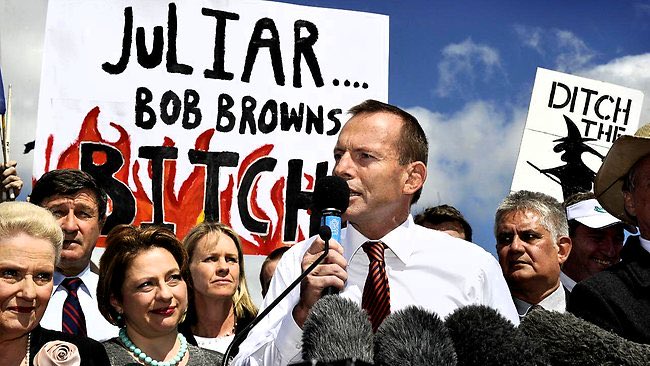 If the Liberal Party has a women problem it deserves it. But don’t be fooled into thinking this is about one party, or even about politics. This is about power in all its forms – cultural, physical, economic, societal – and the men that abuse it.

In attempting to explain all this to our Prime Minister, Jenny, with her remarkable ability to unpack why unambiguously bad things are bad, asked Scott Morrison to consider his own daughters in the wake of the Brittany Higgins story. But just like Australia’s Defence Force Chief Angus Campbell warning cadets about being “alone and attractive at night”, this again places the burden on the victims, not the perpetrators.

I’m asking Scott Morrison to also consider my gorgeous but utterly exhausting young son. Because right now the Prime Minister of Australia is signalling to him that if he grows into a powerful enough man he will not need to face consequences for his actions.

It’s barbaric that this needs saying, but it would be easier for me, and all the other exhausted parents of this land, to raise our good boys into good men that don’t rape women if the PM could just take an unequivocal stance against sexual assault. That he is not – and that apologists in the press are fine with this – should repulse all of us. 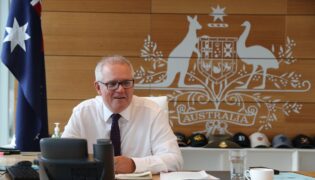 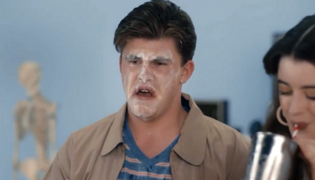 Milkshake anyone? April was a shambolic mess in Australian politics… 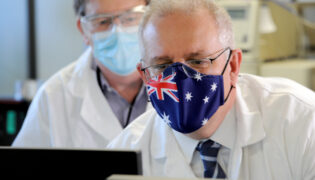 Vaccines… where the bloody hell are ya!? 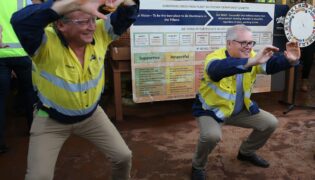 The brazenness of Australian oligarchy
Help us bring you the good news
Our writers can't be paid in exposure, but they sure can die from it. So if you like the stories on The Shot and would like to become a supporter, we'd welcome the money. Just $1 a month is enough for us to keep publishing stories.
Support The Shot
Already a supporter? Click here to never see this again!
Do NOT follow this link or you will be banned from the site!