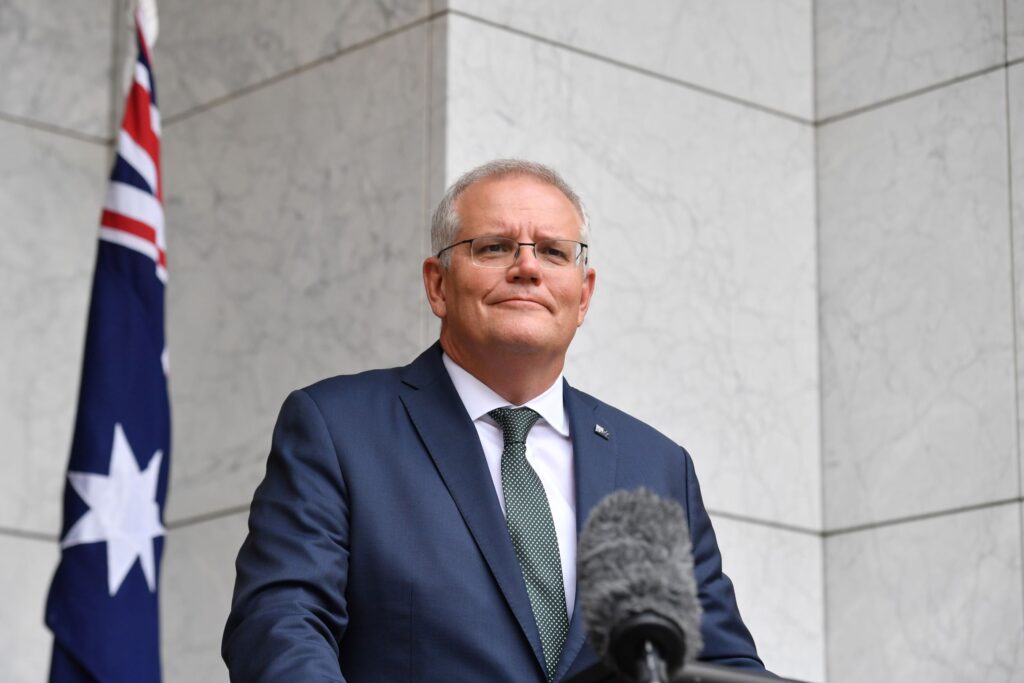 The plague has entered its third stupid year in a frenzy of stupidity, Australia’s east coast code-browning its pants through the dawn of the “personal responsibility” era of the pandemic.

Rapid antigen tests have become the post-apocalyptic black-market currency of choice: scarce, expensive and crucial to our rapidly evaporating dreams of a hot-vaxxed summer “staring Omicron down”. No one is in lockdown, but the streets are quiet anyway. Supermarket shelves are bare, and essential workers are sick or iso’d into short supply. Coronavirus case and death numbers are higher than at any other point, hospitals straining under the weight, years of exhaustion and decades of underfunding compounding the misery. The cafe owners on TV who were previously upset about lockdowns are now upset people have coronavirus and aren’t going to cafes. The tweets are deranged, or Wordle, and KFC is running out of chicken. All of this is real but none of it sounds like it should be. It’s a fucking time, man.

Australia’s cricketers are still “taking wickets with the virus” – and a lot of them – but that seems like a fucked up thing to say right now because it is only January and already 723 Australians have died from coronavirus this year, none of them mildly.

We are told how old the daily deceased were and whether they were frail or not as part of the morbid morning routine. We are told less often they are real people leaving behind real loved ones. We are also told case numbers are meaningless now: Victoria recorded 173,068 new ones this week; NSW 267,264. The vaccines – 🙌🙌🙌  – are saving countless lives, but both these two states’ current outbreaks dwarf the pre-vaccine Danistan Incident of 2020, a traumatic moment that saw Victoria acquire pariahdom and a new identity as NSW’s disappointing sibling, the PM’s least favourite child, Murdoch’s bitch. 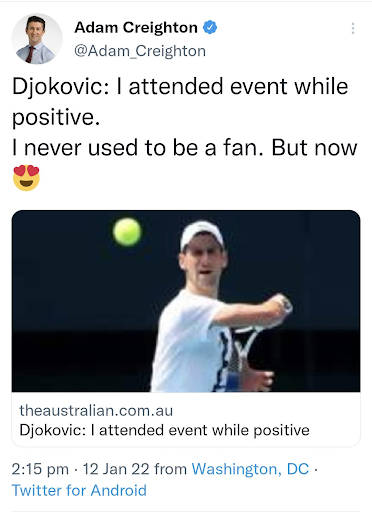 Just as reality teetered close to collapsing on itself, Novak Djokovic, a great tennis player with deranged opinions about vaccines, got kicked out of the country because he’s scared of needles, setting a fascinating precedent for the rest of the Slams to follow, briefly re-highlighting the horrific plight of refugees in Australia’s bi-partisan and barbaric indefinite detention system, starting a diplomatic stoush with Serbia, and making a mockery of 14 seasons of Border Security: Australia’s Front Line. None of this makes any sense.

But all of this – the mounting deaths, the “shadow lockdown”, the blood-thirsty reporting, the missing fried chicken, and even the tennis thing – has at least something to do with the meaningless case numbers we’ve been told not to care about anymore.

Me reaping: Well this fucking sucks. What the fuck.

The nation was encouraged to enjoy Christmas with family and their Omicron. We duly obliged. But was that the entire plan?

The Morrison Government’s long-foreshadowed, long-desired pivot to a “we can’t be fucked anymore” approach to pandemic and economic management is not yet yielding the promised results, the strategy apparently failing to account for how people, economies and viruses behave. Admittedly paying less attention to fucking *everything* is probably good advice for managing anxiety on a personal level, but on a level of governance and logistics hakuna matata is a less than ideal philosophy.

Atop this shitshow and finally getting his “let ‘er rip” wishes after being ignored by state premiers for years – Daniel Andrews in particular, but all of them to a degree – sits Scott John Morrison, Australia’s Prime Minister for the next few months.

As disaffected by parliamentary politics as I and a staggering number of younger people now are, outcomes like this and dead-eyed mannequins like Morrison are why elections matter. There is a fundamental difference between the effectiveness of an administration that believes in the worth of government and one that thinks the exercise is a lucrative waste of time. Beliefs such as these become self-fulfilling prophecies: governments that don’t believe in the worth of government are fairly fucking worthless.

Case in point: Australia has found itself perpetually short of the important pandemicy things it needs – quarantine facilities, vaccines, and now RATs – because whenever Australia needs to acquire something it is the Morrison Government in charge of acquiring it. The impulse to do things is restrained in creatures ideologically opposed to doing things. A lack of empathy, a lack of will, a lack of competence running alongside blind devotion to a cruel, fraught, dying and deadly economic creed is one hell of a noxious brew.

“We are not nationalising the means of production or distribution as a government. Even though some might want to do that, our government would never do that,” Morrison said yesterday, explaining why RATs are not free here like they are basically everywhere else. This follows remarks about not wanting to “undercut” the free market and that “we can’t make everything free”.

Just days after saying this, the nation spent $3.5 billion on new tanks, useful should ze Germans get funny ideas about the Eastern Front again but not great for ramming down the backs of noses so our kids can return to school safely, so workers can work, and so all of us can get on the piss because seriously fuck all of this. Year Three!!!!! Yewwwwwwwww.

The UK, in contrast, a nation with its own suicidal case of the neoliberal dumbs, has distributed 1.7 billion free RATs to its citizens. Boris Johnson, UK PM, a man currently unsure if throwing a fuck-off garden party in Downing Street during lockdown broke the laws he himself decided upon and explained on TV many times over, still made RATs free and available in his country. Boris did this. Boris.

Gerry Harvey does not live in the UK.

That Morrison was unprepared for getting his way, the country now cautiously stepping outside its “cave”, “like the little girl from The Croods”, should surprise no one. He was unprepared for a marketing job selling the world’s best beaches to people that like beaches.

For the devout of the cult of small government and big money, foresight is an affront to the natural order. And we are conditioned to believe this is the natural state by faithful, sycophantic media, structurally devoted to the same idealless ideals as the Prime Minister: power belonging to the powerful; wealth to the already wealthy; carbon to the atmosphere; women to their men; workers to their bosses, to their owners, to the grinding gears of capitalism. It absolutely fucking rules.

And just when you’re finally coming to grips with the latest batshit development, you see something in the media that makes you feel like you’re losing your fucking mind all over again. 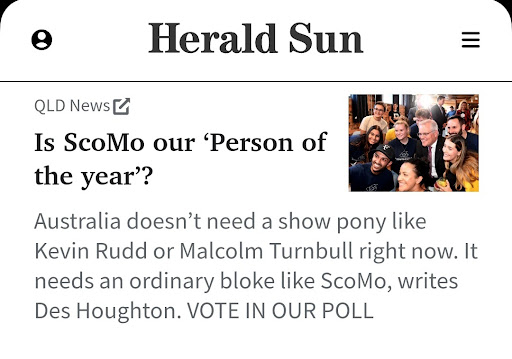 I know you can’t reasonably blame anybody for losing their shit at this point – year THREE!!!!!! – but “Is ScoMo our Person of the year?” defies plausibility as a real question someone would ask. I couldn’t find a mango in Woolies for nearly a week, and Scott Morrison suggested, out loud and publicly, that we could remedy this situation by allowing children to drive forklifts. 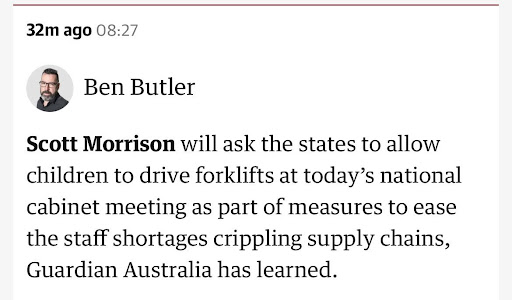 Scott Morrison says national cabinet has agreed to "proceed no further" with the idea of 16 year old forklift drivers.

National cabinet was characteristically unimpressed with the Prime Minister’s kids-and-heavy-machinery proposal, so it is now a non-issue, but imagine being the poor union rep handed that one: advocating workplace safety and suddenly finding yourself in a Dark Universe Victorian England, the child-labour force abandoning chimney sweeping en masse to go fang forklifts. All because the PM, a cooked individual, wanted it that way. Australia makes less sense the more attention you pay to it.

Like many Melburnians I spent a larger portion of the last two years than is typical drunk and/or blazed as fuck. Good reasons for doing so aside, I’m starting to realise I need to actively disassociate myself through the arduous task of paying attention to Scott Morrison, a Prime Minister so unlikable I’m convinced his speech writer and photographer are playing the long game of trying to subtly take him down from within. Apparently I’m far from alone in this response. The hundreds of replies to this tweet could be considered group therapy.

Is Scott Morrison the most infuriating, dumbest trauma trigger for anyone else or just me?

We were always destined to get lumped with these sorts of leaders at neoliberalism’s ass-end, the hollowing out, whittling away, and selling off of effective checks and balances basically complete. It was always in the tea leaves, and fuck me it’s hard to watch, yet alone live through.

Our Prime Minister is unprepared habitually because he is uninterested in being prepared. He is a man capable only of feigning humanity, passive-aggressively and defensively, and only when pressed on whether he gives a shit about a particular something or not and the focus-grouped answer is yes, he does give a shit, so sincerely in fact he spoke to Jenny about it just the other night. He is a vortex of shirked responsibility, his tenure a policy wasteland and a bookkeeper’s nightmare. He leaves behind less a prime ministerial legacy and more a hole.