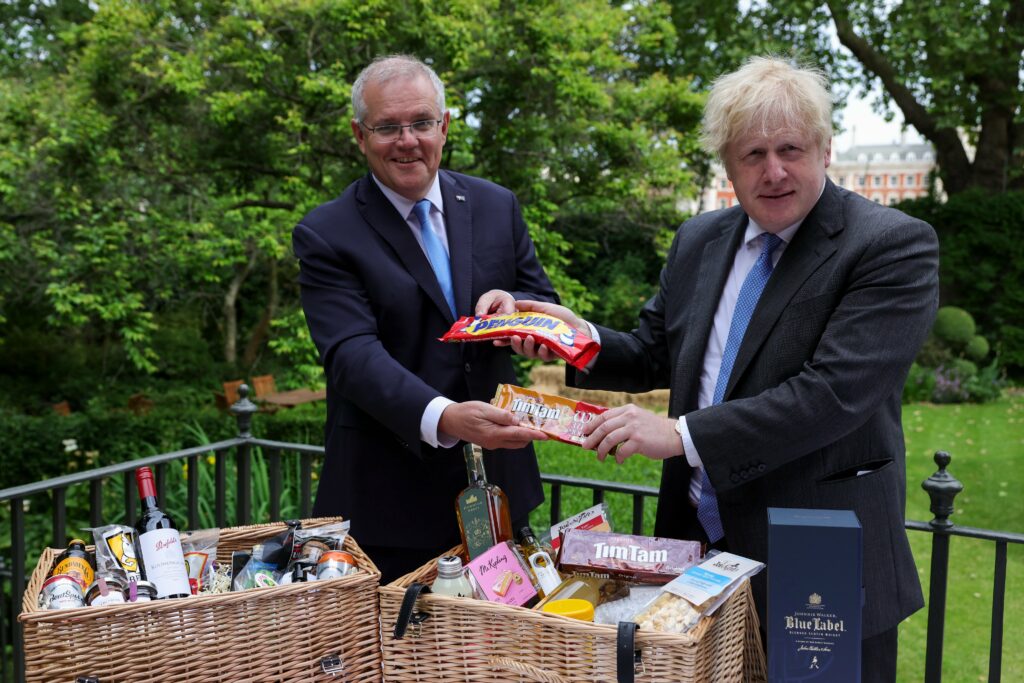 Boris Johnson, a man tasked with brexiting a decrepit empire out of the EU’s extraordinarily useful $15 trillion trading bloc and into a free and open chocolate biscuit exchange with Australia, got to meet Joe Biden alone at the G7 Summit.

As actual members of the G7, a regular gathering of important countries that aren’t China or Russia, the US and the UK had important things to talk about. Things like competent vaccine rollouts, and doing more than fuck-all about the climate crisis in the vain hope our descendants won’t spit on our bones and curse our long forgotten names for the rest of eternity, the degree of their misery resting entirely upon today’s shoulders. 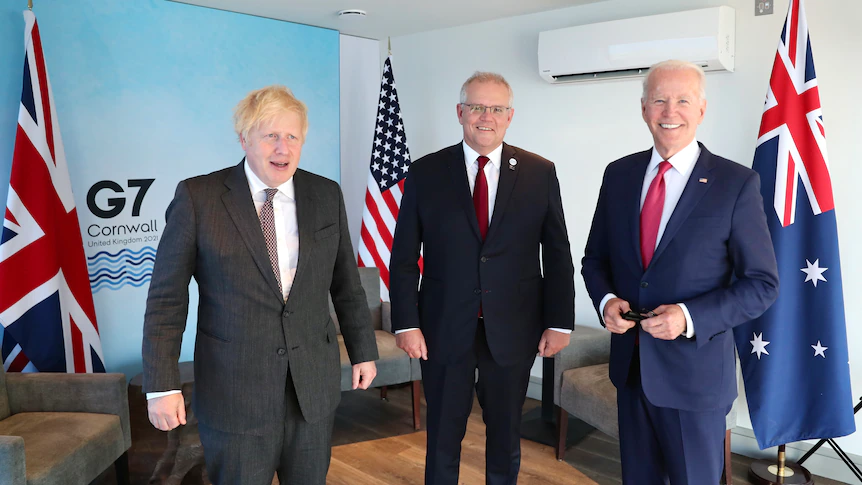 The trilateral photoshoot Morrison flew around the world for during the middle of a pandemic, at which absolutely nothing concrete was agreed upon, was nonetheless deemed a diplomatic success by Australia’s court jesters disguised as political commentators. Morrison’s inability to meet the US President alone was somehow a good thing – a position slightly inconsistent with the media’s typical approach of judging a PM’s strength and guile on the ability to receive belly rubs from US Presidents. 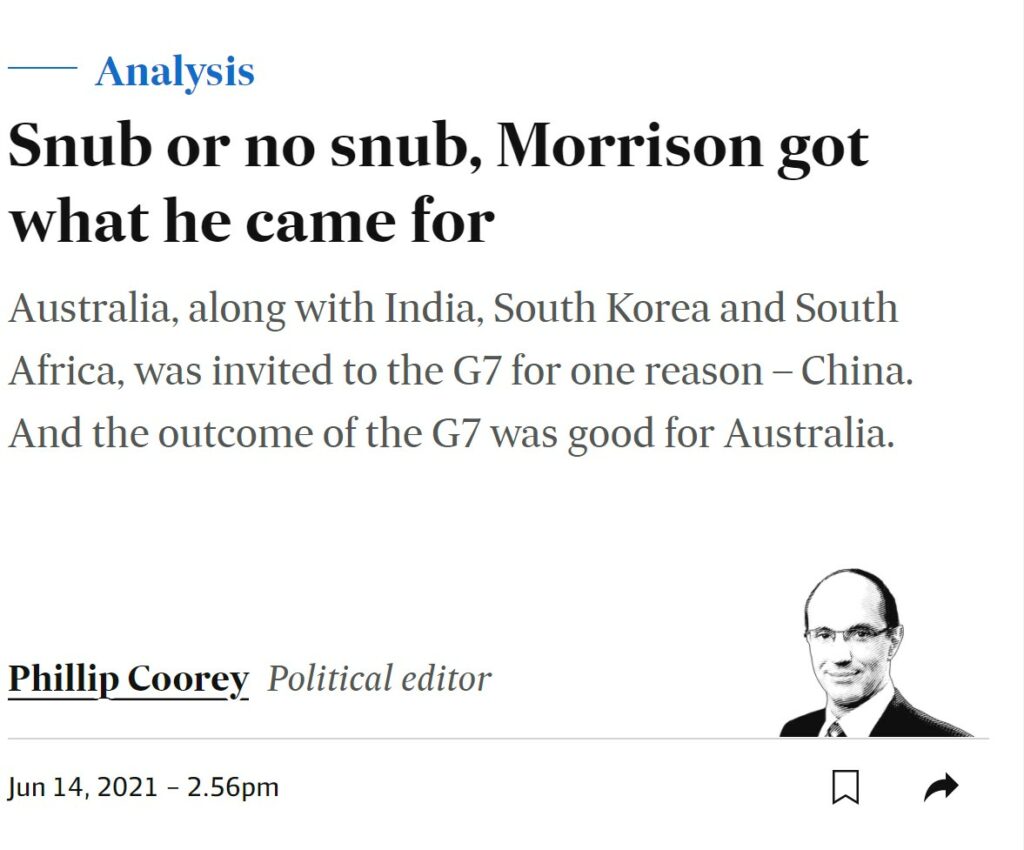 Yes Phil, that is one possibility (not really). Another is that this is the diplomatic treatment befitting of Australia’s true global status as embarrassing, unhelpful coal-guzzling climate pariah; a stupid, irresponsible outlier in a shifting world; an unambitious island nation determined to squander the very real opportunity to prosper in the inevitable renewable energy age.

No matter how the Australian Government spins this, how breathlessly their propagandists in the press parrot their position, or how effectively our fossil fuel oligarchs lobby against it, this year’s G7 marked the beginning of the end of the age of coal.

Australia’s current target of a 26%-28% reduction in emissions by 2030 sets us at the back of the developed world’s contribution to this global crisis, and our current trajectory has us reaching net zero emissions by 2167. By then, we’ll hopefully be vaccinated against coronavirus.

Scott Morrison, short on actual commitments, or even really a good reason to be there, bucked the trend and used his “observer” status at the G7 to mumble weird mealy mouthed shit like, “I sort of call this the Frank Sinatra approach. We’re going to do it our way in Australia.”

Having not investigated Frank Sinatra’s carbon reduction policies in any real depth, I can only assume the crooner was committed to suspicious offset practices, not counting emissions from the coal he dug up but sold to other nations for burning, investing heavily in different fossil fuels like gas, funneling the coal industry lots of money to work out how to capture carbon, demonising electric vehicles, refusing to mention the word “battery” in any renewable-related context, and decades of convincing the electorate that all the world’s scientists are wrong and Rupert Murdoch is right.

Time after time, Morrison’s legacy at these historically significant gatherings of world leaders is to lurk at the fringes and say largely pointless things. But hey man, pandemic life sucks, I get it. If someone was willing to put me up in a nice room and unleash me on the open bar, I’d go to the G7 as well. Even if I didn’t really have a good reason to be there. Doubly so if my last overseas holiday was cut short before my QAnon BFFs could surf Hawaii with me because Australia’s east coast was on fire and the optics were looking a little iffy. We’re all in it for the kicks, baby! 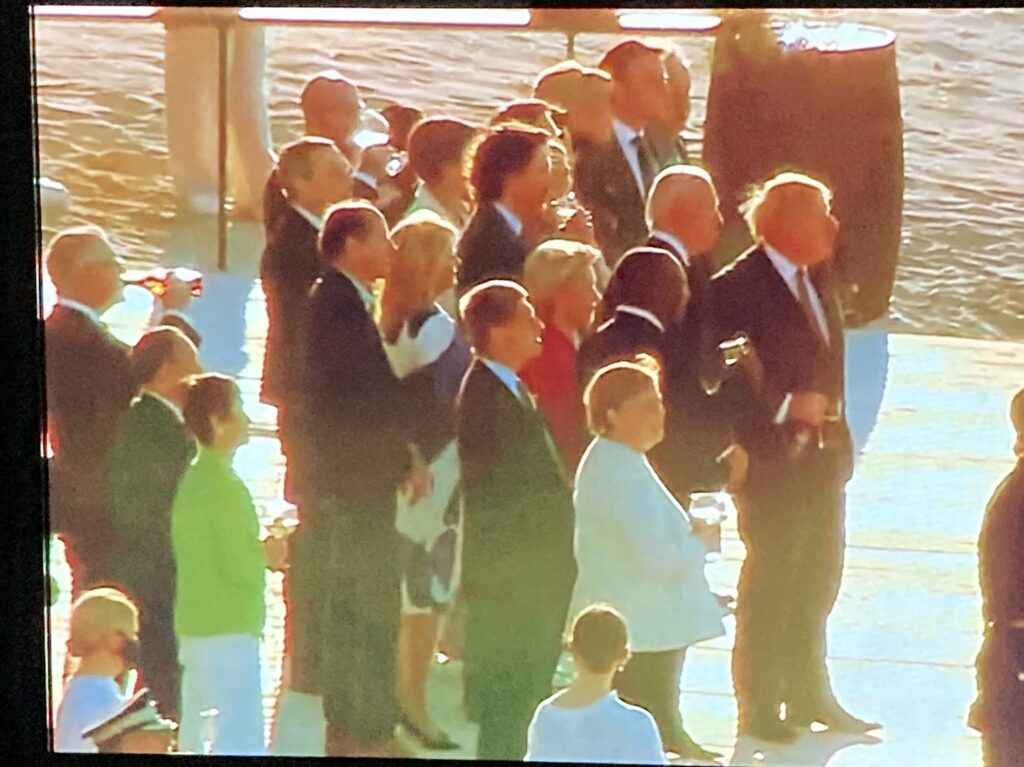 Morrison is acutely aware of the suggestive power inherent in these short, stupid phrases. He has devoted much of his life to the craft, first as a mysteriously fired ad man and now as an ad pretending to be a politician. It is how he governs, and why he says fuckwitted things like “have a go to get a go” and that vaccination “is not a race” all the bloody time.

These tiny idioms reverberate around reluctant brains, ticking off the brand recognition part of the job, and they only stop making sense if you bother to think about them for more than a passing moment. Opposition policies to promote things like electric vehicles are reframed as an anti-ute “war on the weekend” and coal is cast as hypocritically powering inner-city “barista machines”. How good!? 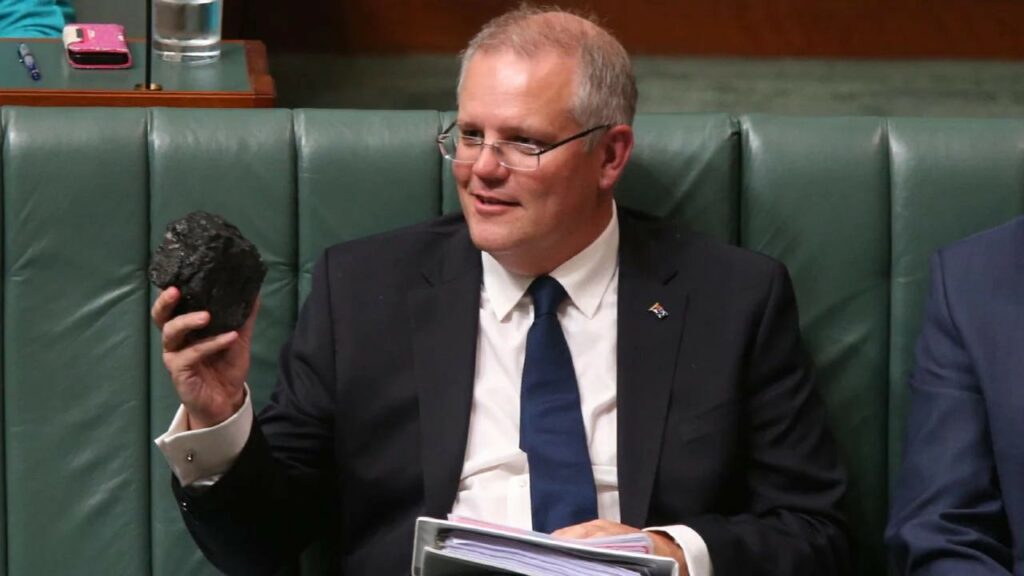 After four disastrous wasted years of the Trump presidency, Biden has signalled that the USA is willing to lead again on the climate crisis. This is not just benevolence on the part of a damaged superpower: there is endless opportunity for prosperity in transitioning to the renewable age ahead of the pack.

The UK, the other corner of Murdoch’s flailing anglosphere, is moving at a similar pace. Boris Johnson is every bit the sociopathic, far-right oligarchical stooge Morrison is, but his commitment to fighting off the worst ravages of our collapsing climate is far realer than Australia’s. British conservatives, for all their elitist cruelty and inbred opportunism, aren’t as anti-science as Australia’s oafish equivalents. Even Margaret Thatcher, a terrible human being, believed in climate science.

It is admittedly easier for the UK to make these commitments than it is for Australia. Most of our obscenely wealthy, obscenely influential oligarchs own the right to dig carbon out of the ground, whereas the UK’s unelected lords of capitalism tend to be in industries like finance and insurance – sectors existentially troubled by climate change rather than actively profiteering from it.

And so here we are, choosing to be left behind, choosing not to help enough, choosing to prop up dying polluting industries at the expense of emerging clean ones. Morrison at the helm, a man looking to the rapture with glee, a handshake chocolate biscuit trade deal provisionally approved of, 3% of the nation fully vaccinated, zero purpose built quarantine facilities under construction, and a steadfast commitment to my beautiful son, and all our children, that they will suffer more climate-induced misery than they need to. Fuck this man.