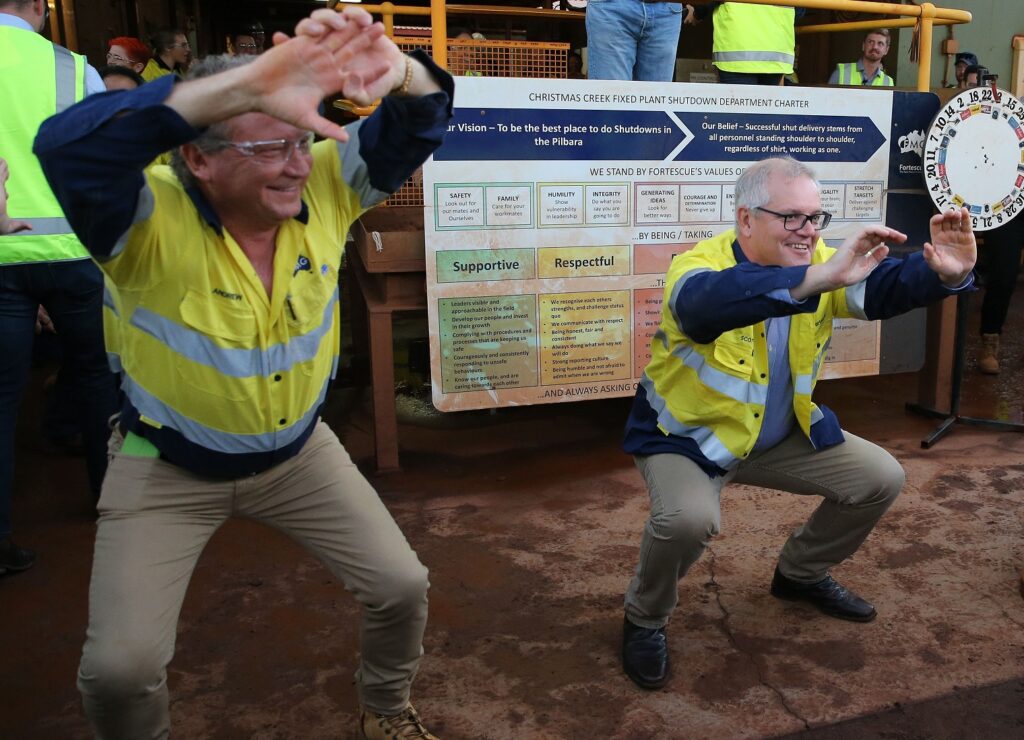 Last week, as dawn broke at one of Andrew Forrest’s large holes in the ground, the Prime Minister’s overworked marketing department delivered both a soul-sapping image for the ages, one now seared into my occipital lobe forever, and a neat illustration of the tools of oligarchy in action. Look at these fucking photographs. 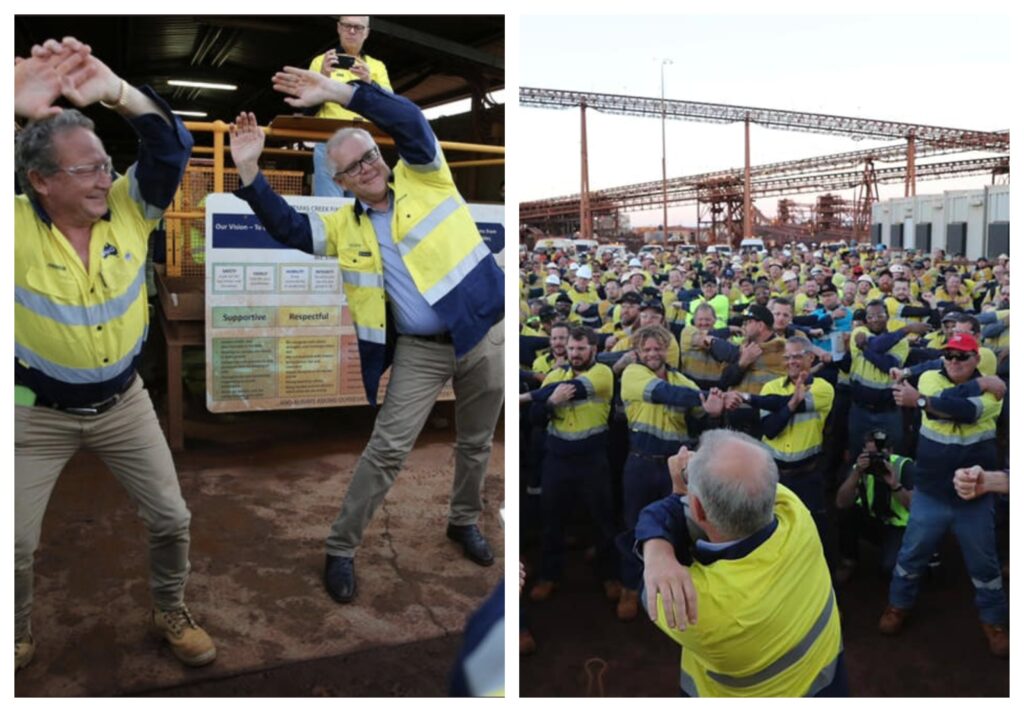 Picture the scene: an endless warming sea of hardhats and high-vis and blokes. Giant trucks. “Working class man” pumping over the PA. Morrison’s exhausted PR manager presumably celebrating the stagecraft by jizzing on a desk somewhere or fucking in the Parliamentary prayer room.

Cameras rolling, shutters clicking, the curated image of “Scomo”, man of the people, beamed far and wide. For the Herald Sun readers who accidentally clicked on the wrong link, our Prime Minister, a man paid $549,250 a year to do… stuff like this… isn’t what Barnsey was singing about. Nor is Andrew Forrest for that matter, a proud hole owner with a personal fortune of $20.3 billion, currently the 87th richest human on the planet.

And on this particular whacky morning, the people that do the actual work at the large hole in the ground, arriving for a normal shift at the hole, somehow find themselves caught in one of the PM’s eternal branding exercises. Limbering up with Scotty – a PM desperate for both a distraction from a rape cover-up crisis and 20 million odd doses of coronavirus vaccine – and their boss, one of Australia’s unelected lords of capitalism.

Journalists call him “Twiggy”, softening the image, warming our hearts. If they took their roles as watch dogs for democracy seriously they’d call him an oligarch instead. The outsized power and influence over national policy that comes with owning such a large hole, or a large shitty electronics shop, or a warehouse full of Hydroxychloroquine and a rubber dinosaur theme park called Palmersaurus – in one very specific odd case – is inherently undemocratic.

Corporate media cannot say any of this loudly because, as Kevin Rudd so accurately and so irritatingly describes in this tiny little book I agree with entirely but can’t bring myself to finish, most of our press is owned by the oligarchical rot itself.

Never had such a difficult time getting through such a small book that I basically agree with entirely. Classic Kev. pic.twitter.com/FtW2j8zmBn

Across the world, Rupert Murdoch perpetuates the myths, lies, and distractions that allow the plunder to continue. National discussions are restricted to the hardest right talking points, limiting imaginations and stoking cruelty and division whenever it can. This fosters a landscape where our most fuckwitted individuals say counter-factual things like “climate change isn’t real”, “the dole bludgers, not the rich, are the actual problem”, and “all those brown people in boats are ruining our way of life”.

NewsCorp has wielded an endlessly rebranded culture war against the reasonable functioning of the electorate for decades, existing to give people something else to be angry about. In the 1990s, it railed against “political correctness gone mad”. Today, it is rebranded the “woke crusade” on everything. Because why be mad 2000 odd individuals are richer than the fucking Pharaohs and the planet is hurtling to ecological collapse when those pissy lefties are upset about Coon cheese, or Dr Seuss, or whatever else it is very few real people are genuinely upset about?

This media ecosystem keeps the curtain pulled on the real sources of humanity’s angst, and it does this for one crucial reason. There is a fatal flaw at the heart of neoliberalism. It is nonsense. It does not, has not, and will never work as advertised. Wealth does not trickle down, it gushes up in a torrent.

The myth that sold this invisible-by-design ideology, one that has ruled Australian, American and British life since the world tilted towards cruel self-interest, has now been definitively debunked by 50 years of economic data. Policies like not taxing the obscenely rich, selling public assets, and letting corporations do whatever the fuck they want has only led to the obscenely wealthy becoming even more obscenely wealthy.

That this somehow still surprises people is both deliberate and a massive problem. It is also why News Corporation still exists. A media empire with serious profit problems – in that there aren’t any – is funnelled public money by conservative governments, who are repaid in kind with glowing coverage, no matter how mediocre and incompetent they are.  The staggering mediocrity and incompetence of the Morrison Government proves there are no limits to this.

In the UK, the embarrassment of faded glory, decayed empire, and humanity’s worst xenophobic impulses have been stoked into the obvious self-harm that is Brexit by Murdoch’s network of tabloid pseudo-newspapers.

In the United States, the very real, very justifiable frustrations of sold-out working class Americans have been manipulated in lockstep by an historically unfit President and the systemic abuses of journalism over at Fox News. This culminated in January’s deadly, conspiratorial, seditious coup attempt at the US Capitol, the seat of American democracy itself.

And in Australia, where the most powerful malignant unelected ruler alive today has more control over what our minds absorb than anywhere else in the entire fucking world, we continually elect governments committed to the ongoing ransacking of the nation by the uber rich, the destruction of our climate, and an endless assault on our working rights and quality of life.

Our Prime Minister is still the vacuous man that waved a lump of coal in Parliament House. He still refuses to do anything at all about the looming climate crisis; still leads a Government responsible for 124 documented instances of brazen corruption. And yet he is popular. Partly because of shit like this. 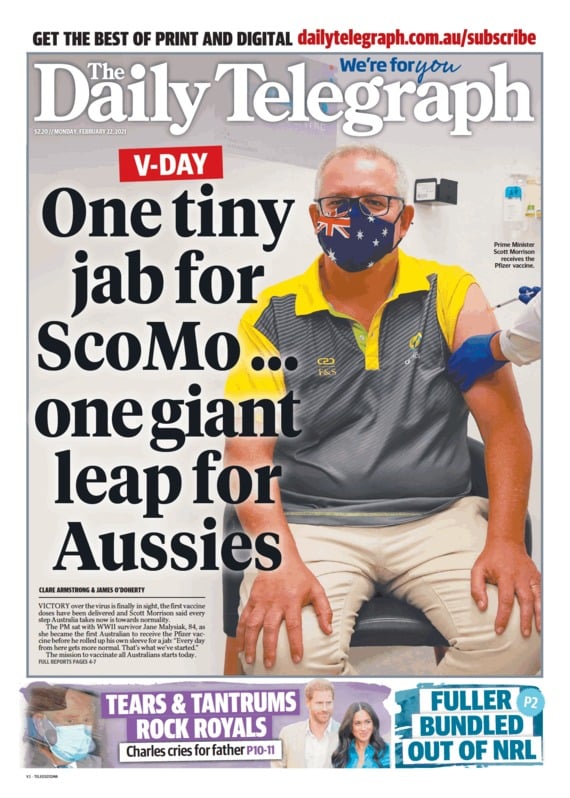 In 2021, being alive, typically a bewildering experience, is more annoying than usual. There is a pandemic, which sucks. More than 3 million lives have been lost to a virus no one knew about at the end of 2019. Countless jobs and businesses have been destroyed, holidaying is impossible, and going outside is intermittently illegal. Everyone is missing someone, or something, or somewhere.

And while ordinary people have copped the brunt of coronavirus’ misery across 16 months of global trauma, disproportionately dying, disproportionately suffering, the immorally wealthy have prospered. Australia’s 31 billionaires have syphoned an extra $85 billion from the wider economy during the pandemic era alone.

The world’s 2000 odd billionaires have collectively more wealth and power than any small group in human history. Rameses II or Alexander The Great didn’t have the technological means to launch electric cars into space or create an army of cybernetic robo-dogs. They might not have had the cash, either.

Unfettered capitalism and democracy do not coexist naturally: they eat each other, and at a certain point we need to consider which we value more. Two former Prime Ministers, Kevin Rudd and Malcolm Turnbull, have now thrown their support behind a Royal Commission into media ownership in Australia. This is an important first step, but only that. Royal Commissions are most publicly associated with how easy they are to ignore, and News Corporation is far too dangerous to do so.

Most Australian oligarchs own large holes in the ground. Rupert Murdoch owns the holes in our heads.