General News
Always remember The Herald Sun was wrong about everything important this year
December 3, 2020 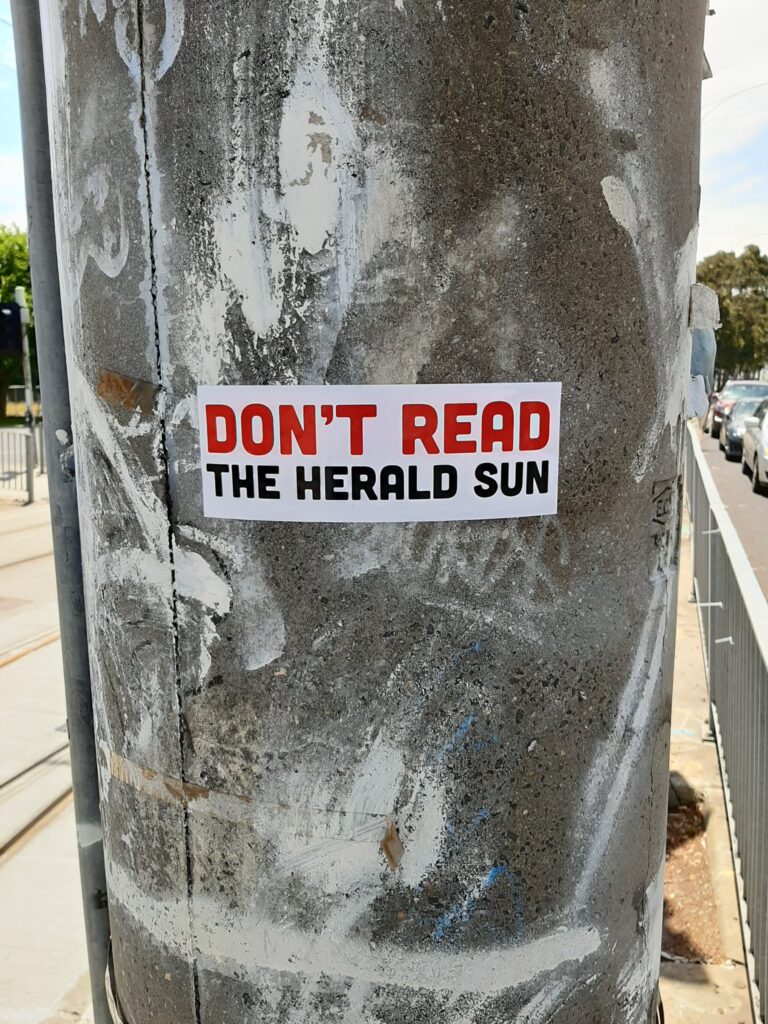 Bias wafts from the pages of Rupert Murdoch’s pseudo-newspapers like methane from a carcass. Just as I keep forgetting I can now take my mask off on the streets of Melbourne, News Corporation keeps forgetting to remove its Liberal Party T-shirt. And Klan hood.

We all know this. Even they know this. Like climate change, the science is settled.

This is the crux of what former Prime Minister Kevin 07 is, for the lack of a better phrase, going on about. He’s concerned with how much Australian media Rupert Murdoch owns (spoiler: it’s quite a bit).

I have a different problem with NewsCorp, though.

It’s a problem I have most specifically with The Herald Sun, because it spent this year driving my city into misery and madness, stomping on our teetering resolve, stoking the flames of revolt behind every dumbass former footy player desperate to hit the golf course, every litigious café owner, Tim “Let’s Kill All The Bats” Smith, and Gerry “The Pandemic Profiteer” Harvey, but yes, you could reasonably extend my problem out to the entire publishing slate, for sure.

My problem with The Herald Sun is that it’s wrong all the fucking time.

Repeatedly and loudly. About important stuff. Stuff you shouldn’t get wrong, and stuff that’s genuinely quite easy not to get wrong, as long as your starting point isn’t “how can I make this situation worse?”

I wouldn’t mind a rabidly conservative newspaper if what it said was happening actually had some bearing on what was actually happening.

Here is a not-at-all definitive list of what The Herald Sun claimed was going on this year to its audience of angry, confused people.

Important note: there’s a link to an example for each point on this list, but there are many, many other articles I could have used instead, because The Herald Sun loves doubling down on being wrong. It practically campaigns on being wrong. And while I have provided these links as examples, I’d strongly urge you not to click on them, because they’re fucking shit.

I don’t even need to link to this one. Everyone saw this through unfortunate osmosis during the long dark alcoholic months of lockdown. This was The Hun’s most unhinged, most persistent conspiracy theory of 2020. Their biggest narrative; everything else was subplot. Here’s my personal favourite frontpage, though. I love how it looks like Dictator Dan is rubbing his hands together with glee at all the democracy and freedom he is stealing. 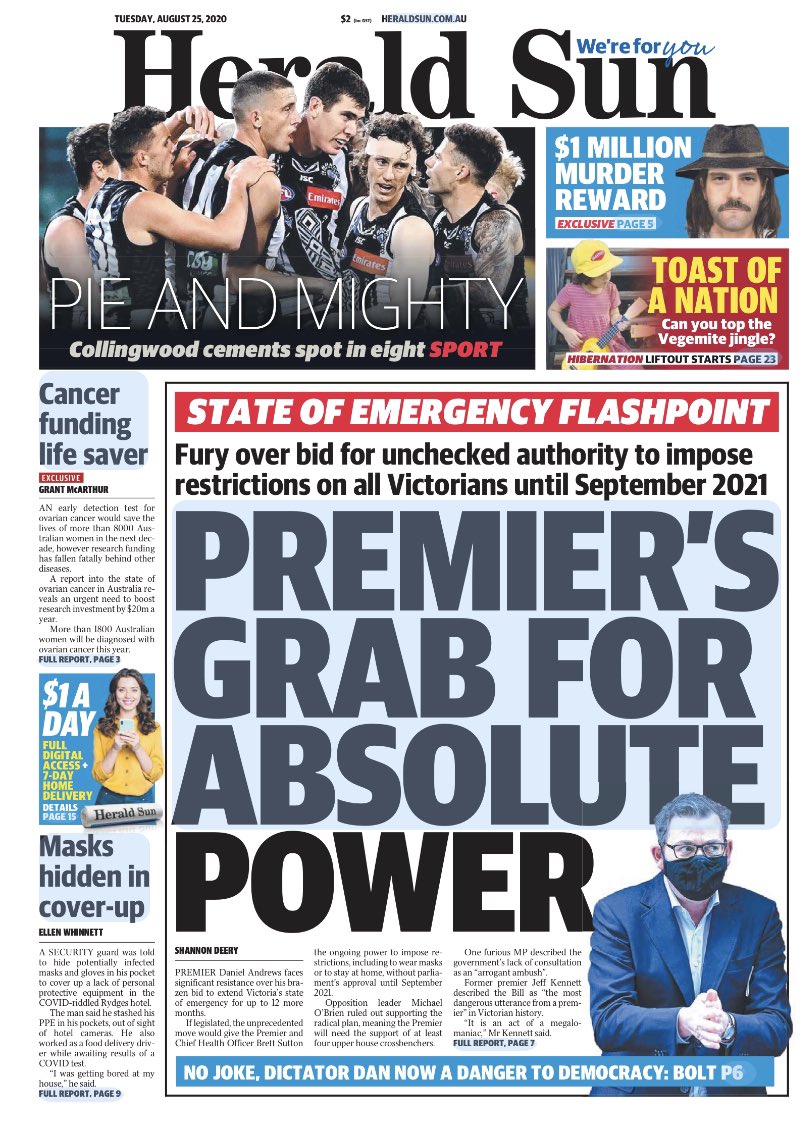 I kept receipts, arseholes. It wasn’t even hard. One of my weird lockdown habits was staying up way too late, scrolling the Herald Sun’s website and screenshotting things that made me laugh.

I live here! I fucking live here!! I have to put up with the people that believe this crap. People that are angry and confused and sad about stuff they shouldn’t be angry, confused, or sad about. On the first day we hit zero cases a man sitting on a park bench accused me of being a “Dictator Dan fan” because I was outwardly chipper about the fact NO ONE HAD DIED THAT DAY. This paper has ruined these miserable people, and it tried to ruin the rest of us.

Many of the stories linked above escaped from The Hun’s Eldritch pit of opinion columnists. From the gurgling swamp that is Andrew Bolt’s brain. From whatever Chris Kenny’s equivalent of a brain is. From the ghoulish Rita Panahi and the work-experience sociopath that is Adam Creighton (Adam’s day gig is with The Oz, but Murdoch cross-pollinates his weeds, particularly video content from Sky News).

This does not matter in the slightest. It excuses nothing. Disclaimers on opinion columns are for my mate Mark’s terrible Star Wars takes, not for blaming brown people for a pandemic – a pandemic you had previously said wasn’t a pandemic.

A long time ago, Rupert Murdoch decided the distinction between news and opinion doesn’t exist where he doesn’t want it to. We should listen to him. He’s right. It is not a distinction that reflects reality anymore. So separating the frothing, racist, stupid side of this newspaper from the side written by (no doubt deeply depressed) real journalists is no longer warranted, nor sensible. It is a courtesy too long paid.

In our social media-driven publishing landscape, a newspaper is only its loudest, most persistent messages. Where Rita and Peta get thousands of retweets and shares on their garbled half-thoughts, The Hun’s straight reporting barely elicits a solitary pity share. Even the real journos don’t retweet their own newspaper’s page. They need to be able to show their faces around town, too, I guess.

The frothing side of The Herald Sun is louder and more important than the depressed just-keep-your-head-down-and-apply-for-jobs-at-The-Guardian portion. It’s not “just Bolt”. Not “just Rita”. There is no “just” left. These voices are The Herald Sun’s id; it’s truest, basest self.

This newspaper has editors. Important people who sign off on every one of these stupid, wrong, quite often racist pieces. These aren’t mistakes, they’re decisions. There is no distance between any of this. I know it’s embarrassing for the footy guys up the back who just want to write about a game they clearly love, and I know many of them despise Bolt and his tadpoles as much as we all do, but it just doesn’t matter anymore.

It was life and death this year and The Herald Sun chose death.

The sole concession I am willing to make is this: writing an opinion column in the moment, when not all the information is available, will inevitably lead to mistakes.

But you – yes, I’m talking to you directly now because I know you’re reading – get this very basic stuff consistently wrong. And this is deeply frustrating because it’s actually quite easy. If you start writing your columns from the position of “what is a true thing?” then you’ll be right more often than you are now. All my columns have aged far better than yours, and I genuinely don’t know what I’m doing. People are only reading me because you suck so fucking much.

And the cringiest part: The Herald Sun is pretending none of this happened. There’s no admission of fault. No retractions. No “whoops, sorry for trying to spread the coronavirus around, I won’t do that again, lol”. Just an embarrassing, obvious, awkward pivot to damage control mode.

One New Year’s Day I woke up, couldn’t find my shoes, realised I was sticky (maple syrup) and that the floor was covered in boiled potatoes which had been mashed into the parquetry. That last part, I assume, was related to my missing shoes. Before long I worked out we’d spent the evening inventing a whisky, maple syrup and potato cocktail called the “Starchy Irish”. I recreated it later out of morbid curiosity. It’s not very good.

That was a moment of self-awareness (and sweeping) that I truly deserved. The cold clarity of a clear mistake in the light of day. I owned up to it and didn’t do that (specifically that) again.

I have never woken up after spending the year undermining the health response to a deadly global pandemic.

I’ve never had to pause and plot a new course after trying to convince a state of 6.5 million people it was living through an imaginary totalitarian dictatorship. I’ve never had to rebrand because I offered some truly terrible, incorrect, potentially deadly advice from January until basically now.

The Herald Sun is having the mother of all walks of shame right now. And it’s pretending it isn’t.

It’s gone from “Free Us, Dictator Dan” to renditions of “Here Comes the Sun” sung by people who clearly aren’t Melbourne’s Jürgen Klopp.

It’s had a redesign. It almost looks like a real newspaper now. All that whitespace! Classy! 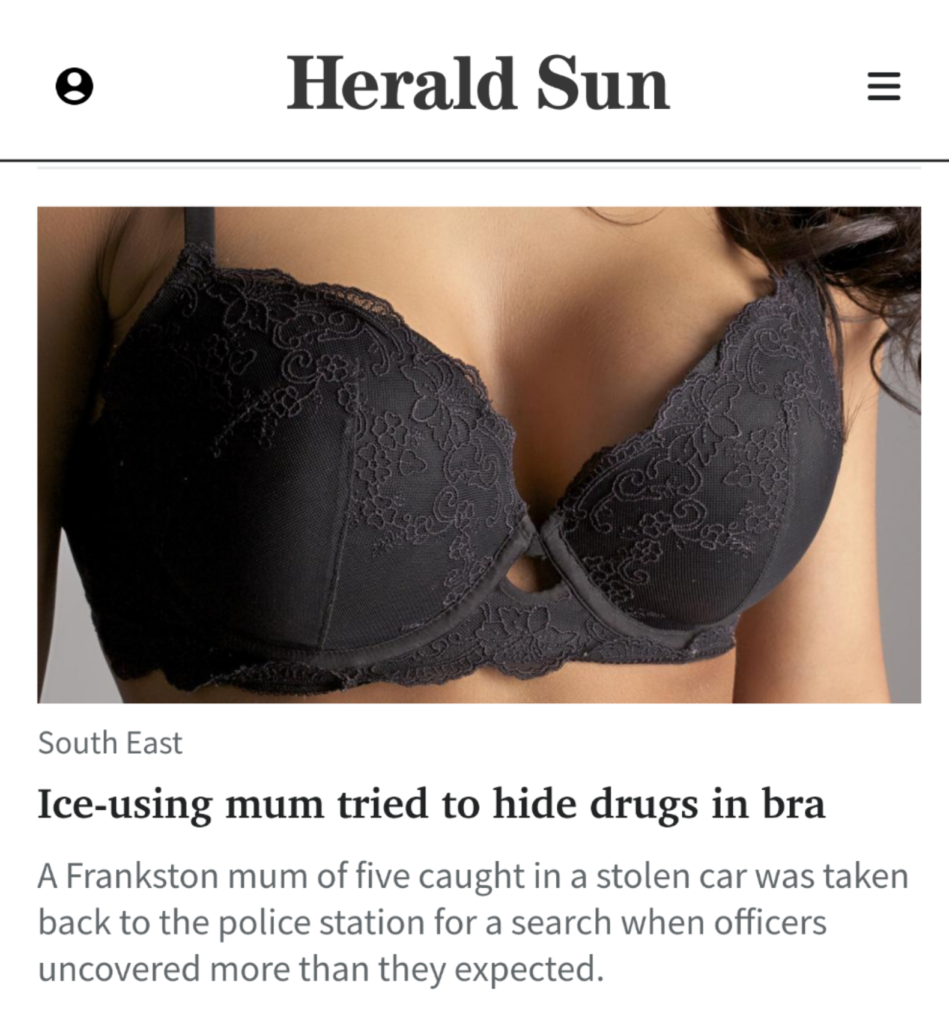 They will always have ice junkie tits. You can’t change who you are overnight.

But you can try to appear like you are, and that’s what’s happening. Andrew Bolt is taking two months off – and moving out of Melbourne, a city he doesn’t like anymore because there are too many foreigners – right at the very moment The Herald Sun is desperate for everyone to forget how awful and wrong it was all year.

How it wasn’t on our side.

How it didn’t want our lockdown to work.

How it did everything except help us when we needed help.

Just because the sun is shining, we’ve stopped dying, and life sucks a bit less right now does not mean people will forget. We might be busy seeing long-lost friends and hugging dearly missed family, but deep down we know that if The Herald Sun had its way none of these things would be possible.

It’s now legal to be outside, and Melbourne is doing it with gusto. 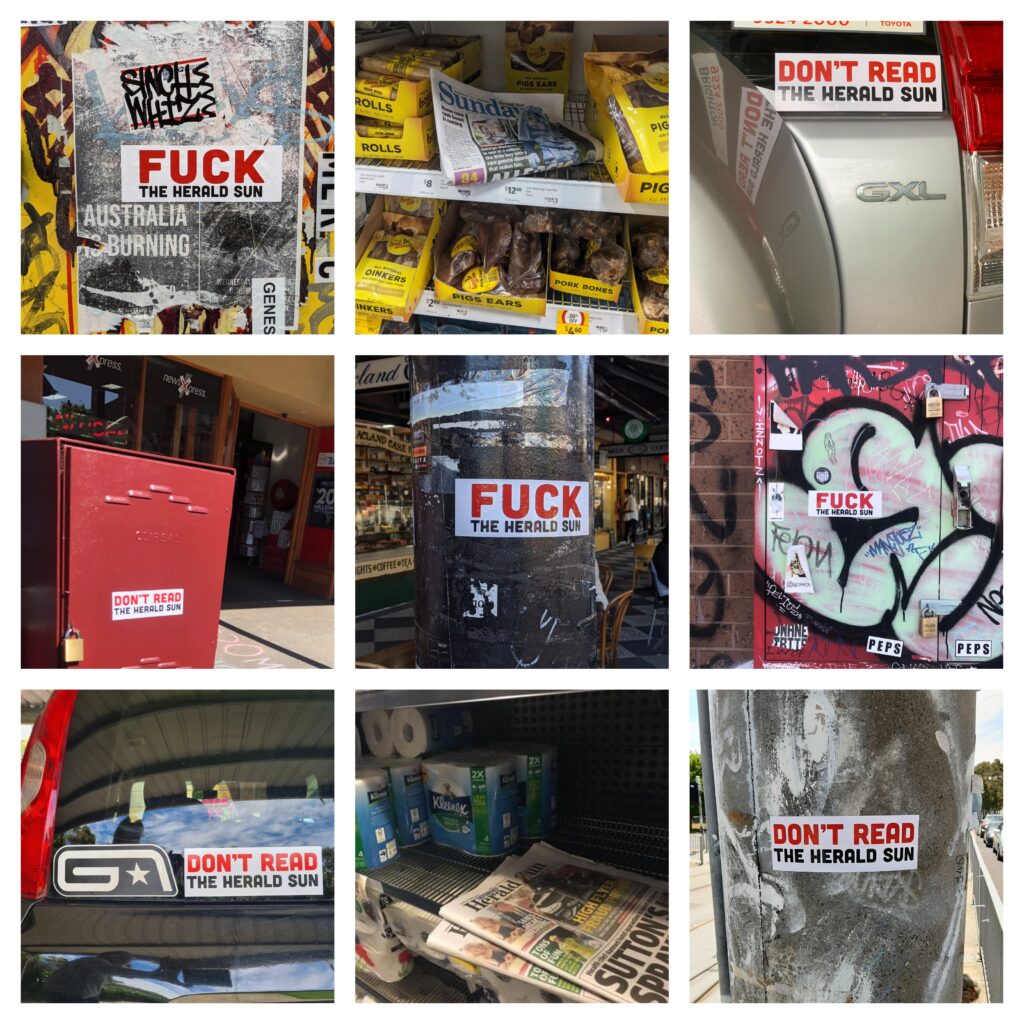 People are moving The Herald Sun next to the rest of the toilet paper and tweeting at me about it, which is fun. And there’s literally thousands of these Fuck The Herald Sun stickers (and family friendly alternatives) scattered across Melbourne now. Stickers which, incidentally, would make great stocking stuffers and can be purchased here.

We sold out and had to get more printed, which is annoying, because we’ve been through a lot this year and I’m half in the mood to  just coast on this post-lockdown buzz through Christmas Party season and on past New Year’s. But fine! This is important too. We’ll keep printing stickers.

We’re charging for these, too, unlike The Herald Sun, which is being given away for free all across this city, in supermarkets and newsagents, and even out on the street like it’s MX.

Reasonable people might assume this is an attempt to prop up already-propped-up circulation figures so it can clasp onto its dwindling ad revenue from Gerry Harvey. I’m not all that reasonable. I think they just can’t get rid of them and need the warehouse space for their Klan robes.

There should be serious consequences for being this wrong, this loudly, this maliciously, this dangerously, this consistently. No one in the mainstream media industry has the power, nor the guts, to do anything about this.