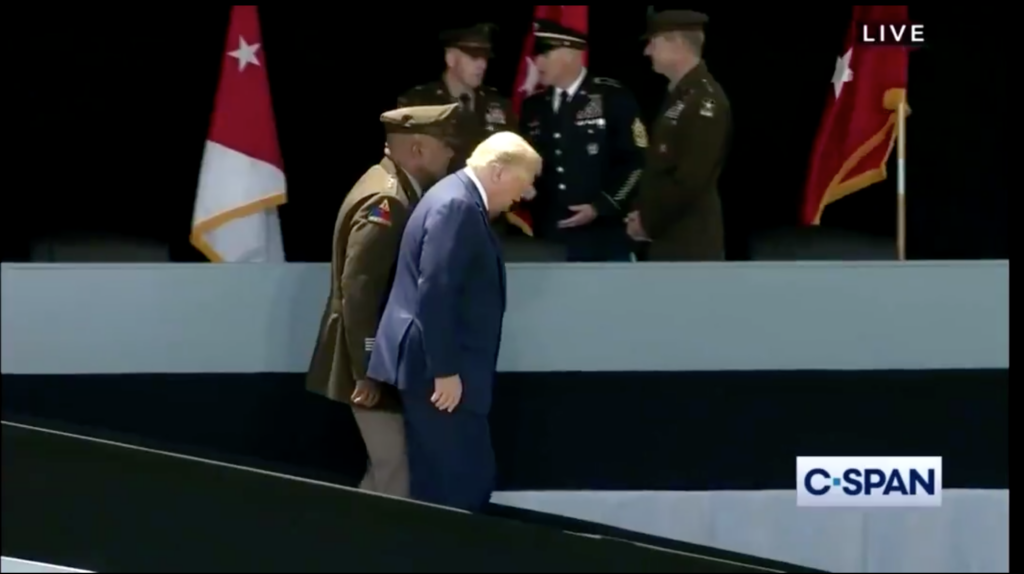 Look, there are more important things going on right now. We know. But (a) we’ve lost all the really important battles the last four or so years and need some petty laughs, and (b) the fragile ego of the man holding the nuke codes does actually matter.

After Trump’s West Point commencement address on June 14, footage of his descent down a not-at-all steep ramp was viewed, and mocked, by millions of people on Twitter. Mostly because of how stupid and dumb the big baby idiot looked.

Trump had trouble walking down the ramp at the West Point grad ceremony. Balance & gait issues are part of his dementia symptoms. Bad planning here. His forward lean on a down slope w/ a normal sized step would make him fall over. To stay upright he had to take baby shuffle steps pic.twitter.com/skxlmFtgb7

None of this would be remotely newsworthy… except it really upset Trump, to the point that he felt the need to respond with what is now one of my all-time favourite tweets.

The ramp that I descended after my West Point Commencement speech was very long & steep, had no handrail and, most importantly, was very slippery. The last thing I was going to do is “fall” for the Fake News to have fun with. Final ten feet I ran down to level ground. Momentum!

Momentum! He ran the last teen feet! It was very long and steep!

Yes sir, Mr President! Why I even think I saw you bust out a 900 Indy grab at the end there.