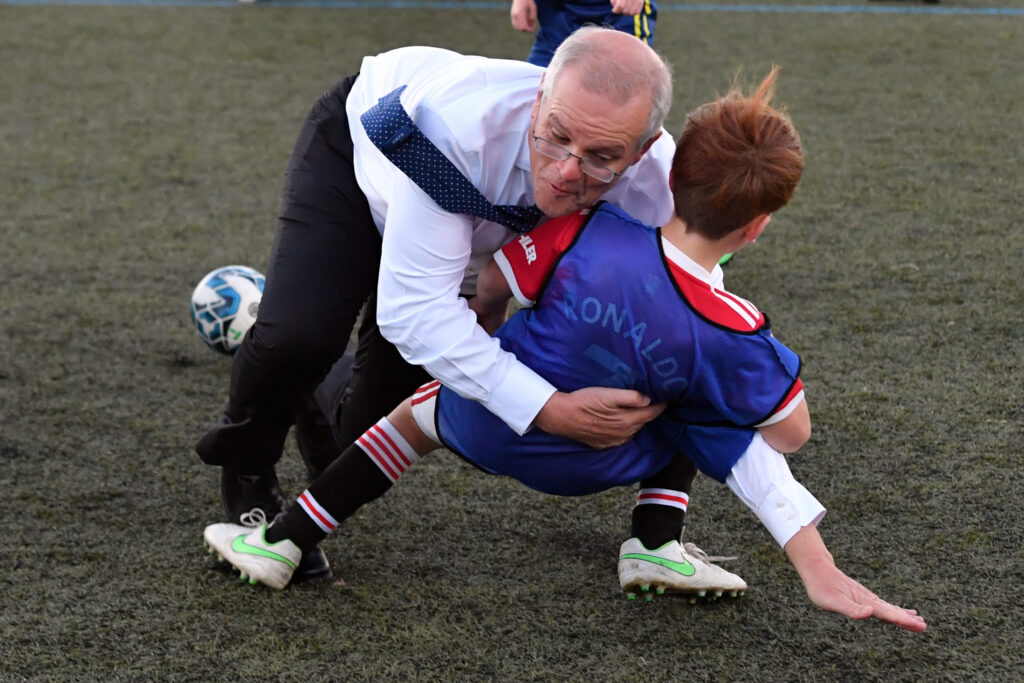 It is the eve of the next Australia. To the soothing tones of Antony Green, democracy, politics, media and our collective brain worm will tangle itself into strange new contortions tomorrow night. Hold your loved ones and coping mechanisms tight.

Not a moment has been wasted on the final leg of the crazy train’s journey to wherever it ends up crashing. In the last stretch before polling, the ALP meekly released its policy costings, The Sydney Morning Herald ran a very serious piece about how wonderful Jenny of “Jenny and the kids” fame is, Pauline Hanson caught coronavirus, Anthony Albanese pissed off the media by being pissed off at the media, and The Herald Sun resurrected Mao ZeDan for some desperate Albanese battering by association. 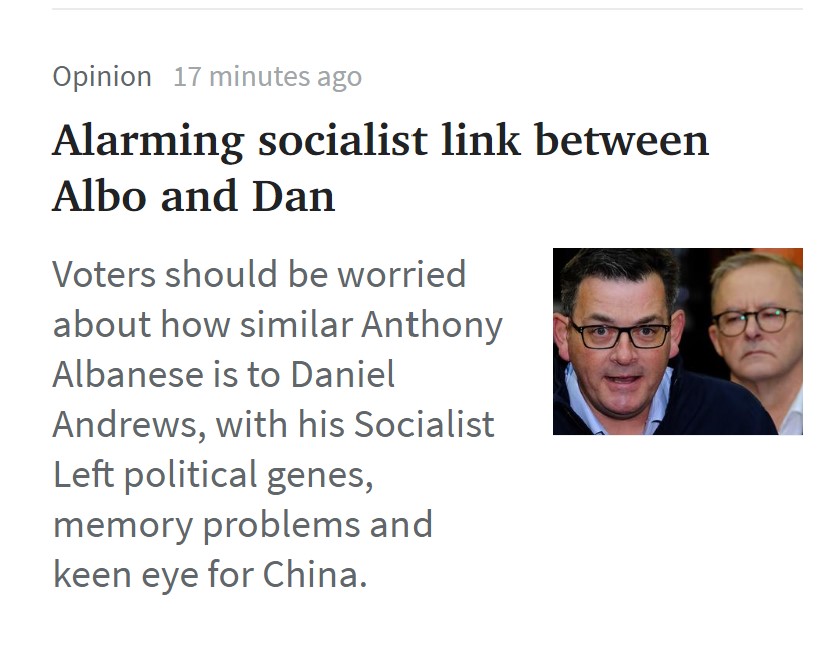 And, because why the fuck not at this point, Scott Morrison crash-tackled a small child into the ground – a ham-fisted metaphor for everything and anything, from his climate change policy and how it will impact tomorrow’s kids, to Scotty’s now-mythical visit to Engadine Maccas and how it impacted the dunnies there.

It also led to the only half-decent front page headline from The Daily Telegraph in a generation. 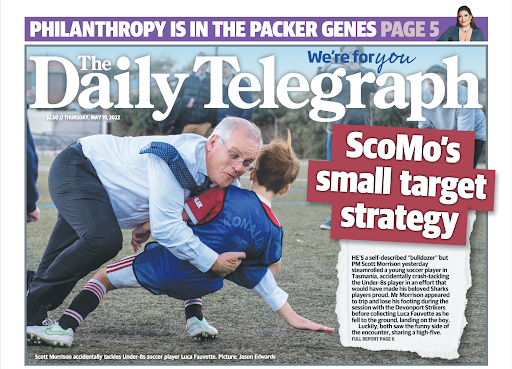 If you’re existentially exhausted by paying attention to all of this, know you are less alone than you think you are. It is exasperating holding the real stakes of this election in mind – the quality of the lives of literally millions – and simultaneously watching dickhead journos using their valuable time and access to play The Price Is Right with the Opposition Leader.

Sorry. But this is embarrassing for my profession pic.twitter.com/Ud7lUo8pxP

Or using their platforms to warn us that voting out Tim Wilson will be a boon for Authoritarian Communism the world over; Mad Vlad rubbing his hands together with glee waiting on the early returns from Goldstein. 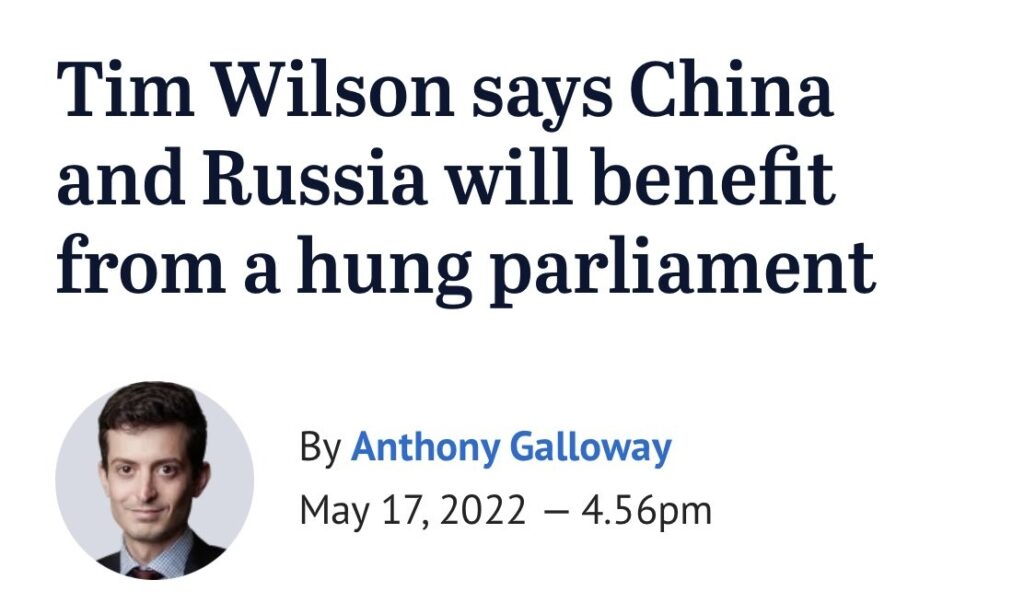 Living is more expensive by the day, and the solutions the Coalition throws to the electorate are short-sighted (“cheaper petrol for a few weeks”), stupid (“children should be able to drive forklifts”) or both (“use your superannuation to buy a house”). And the reason the solutions offered are always so ineffectual in the long-run is because The Coalition is actually, deep down, fine with the way things are. They have been in power for 10 years and real wages have fallen below inflation for the last 10 years. They have always represented privilege and wealth, they’re just extremely good at pretending otherwise.

And atop this rot sits Scott, less his self-described “bulldozer” and more a bullshitter. Australia’s most vacant Prime Minister. Sensing the public souring on his brand – or, more accurately, realising it is all a brand – at the last minute Morrison promised us he could be less Morrisony if given another chance to Morrison. This is a man defined by his absence during moments when his presence would have sufficed: fires, floods, abuse and plague. The outsourcing of the most crucial moments of his Prime Ministership. I’m not sure what Morrison being less Morrisony would even look like? Would he show up on time to natural disasters or would he just evaporate into mist completely?

No matter who wins this election, Australia will not become instantly and magically less isolationist, less cruel to refugees, less beholden to sociopathic coal oligarchs and less bent to the whims of psychopathic media overlords. If you are at all concerned there will be nothing to complain about or swear at on Twitter following the election of an Albanese Labor Government, allow me to rub balm deep into your troubled soul: Kristina Kenneally lies in wait as the Minister for Making Sure Things Will Still Suck A Bit.

Mr Morrison has been in office for nearly a decade including as immigration minister. Why has he left it to now to announce this?

But Australia needs a new government like I need antidepressants and four more hours of sleep every night. We can be better than this.

Labor’s promise of an integrity commission with real teeth is where it all starts. Not only will it make rort of the Morrison sort rarer, it will restore some faith in party politics – presently at an all-time low, a key reason we should see more Greens and independents in Parliament than ever before. Labor’s climate policy is still woefully inadequate, but if dragged away from the coal lobby by a powerful crossbench, we could see real commitment to saving our collective future. Contrary to the scare campaigns running out of NewsCorp, a minority Labor Government held to its conscience by Greens and Teals would be a best case scenario for this election.

Under Morrison, Australia has fallen to global climate pariah status, pissed off the French, alienated Victorians and women, demonised the trans community and achieved sweet fuck all in terms of substantial policy over the last three years. We are presently rudderless heading into the choppiest of waters. Governments can be about helping, not punishing those in need, all it takes is deciding that’s what we collectively want. It’s such a low bar, but we can be better than this tomorrow.