2022, an exceptionally dumb year, began with former Australian Prime Minister Scott Morrison advocating for the rights of disadvantaged children everywhere to be able to drive forklifts at Woolies; the pandemic had exacerbated global supply chain issues and, of all the imaginable remedies to this situation, minimum-wage kids operating heavy machinery appealed to Scott’s mindhole the most. The year ended, just as appropriately, with former American President Donald Trump dropping a collection of $99 NFTs, artificially scarce internet pictures that depict him dressed up as a superhero or a cowboy or a football player. 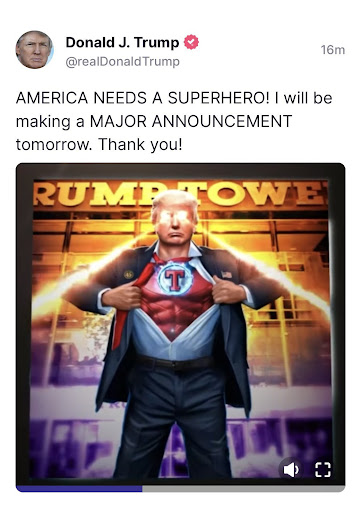 Trump announced this latest attempt to fleece money from his supporters today with the immortal and presidential words, “Hello everyone, this is Donald Trump, hopefully your favourite President of all time – better than Lincoln, better than Washington – with an important announcement to make: I’m doing my first official Donald J. Trump NFT collection right here and right now”. 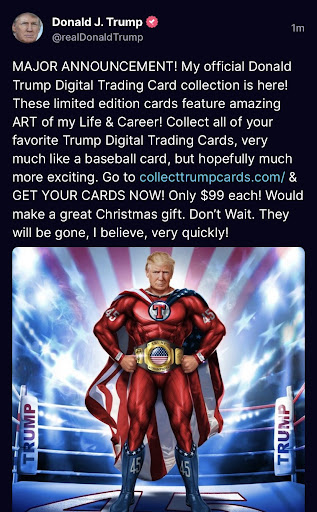 Before the dumb had even settled to the floor, alt-right figureheads of the deadly January 6 failed coup felt the first shivers of doubt crawling along their spines.

The months in between these bookended reminders that bluster is the most powerful ability man can possess were just as dumb. Vladimir Putin invaded Ukraine causing untold human misery; FIFA held the World Cup in a country that outlaws homosexuality and exploited indentured servitude to build shiny new stadiums; the UK went through three Prime Ministers, one of them ousted in oafish disgrace, another leaving after overseeing the death of the economy and the Queen in less time than a lettuce can wilt; Rupert Murdoch sent his finest journalists to investigate the steps Daniel Andrews broke his back on in an inept attempt to gaslight Victoria into electing the unelectable Victorian Liberal Party; Kanye West is a fucking Nazi now; and the world’s richest man blew $44 billion dollars on Twitter, invited said Nazis back onto the platform, scared away advertisers, fired most of the staff, and then repeatedly broadcasted to the world exactly how sensitive, confused, hypocritical, and stupid he is. 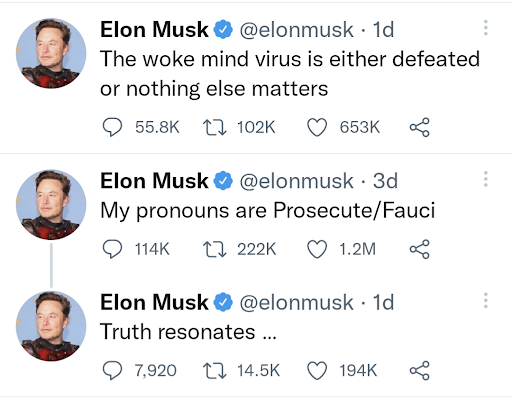 Rarely, across the expanse of all human history, has relying on the benevolence and wisdom of the world’s richest people turned out to be a good call. More often than not, common people end up in chains or debt trapped into a miserable half-life, whittling away precious time building pyramids under the sweltering sun or packing crap into small boxes inside Amazon distribution centres. Either way, pee breaks are a luxury. When wealth is allowed to pool in the sausage-fingered hands of so few, the quality of life of everyone else on the entire planet turns on the whims, hobbies, tax-loopholes, lobbied outcomes and fuckheaded opinions of the individuals psychotic and soulless enough to have won capitalism. In an untethered capitalist world, like this one, the insecure egos of the ultra wealthy shape human history. That’s kinda fucked!

This is the guy that now owns one of the world’s most important portals for global discussion. It bodes poorly. 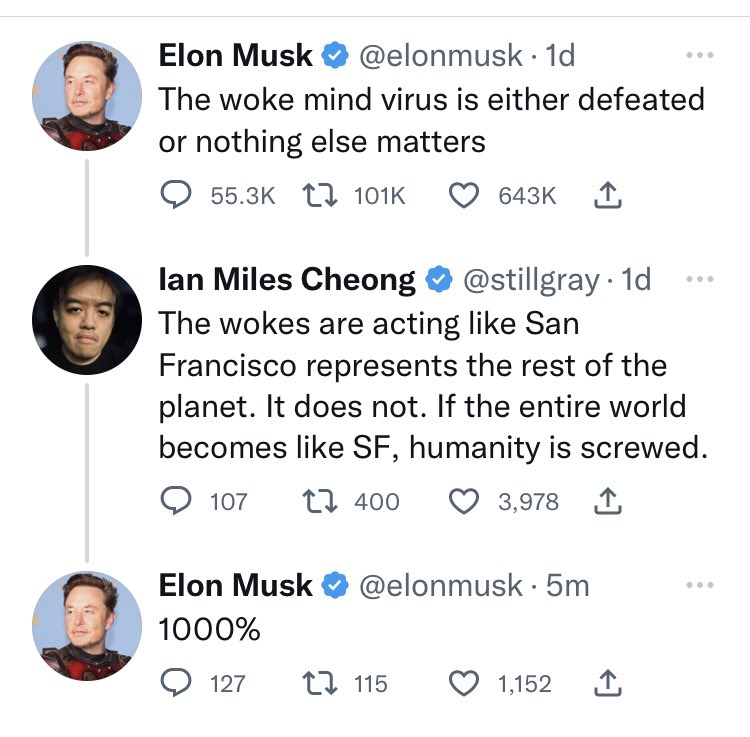 I’ve encountered Ian Miles Cheong many times in my former life as a video games journalist. “IMC”, in those circles, was a reactionary gamergater that wrote many strange columns about how outrageous it is anime titties are sometimes censored and how “SJWs” (this was the pre-woke phrase for “the wokes” during the last phase of the eternal culture war) are ruining video games by wanting women in them and stuff like that. Take my word for it: Cheong is an extremely embarrassing chud for the world’s (second) richest man to be sucking up to.

Speaking of. The Nazis are definitely back. That’s never a good thing, but acknowledging it is far more helpful than living in denial, something the New York Times is making an art form of. 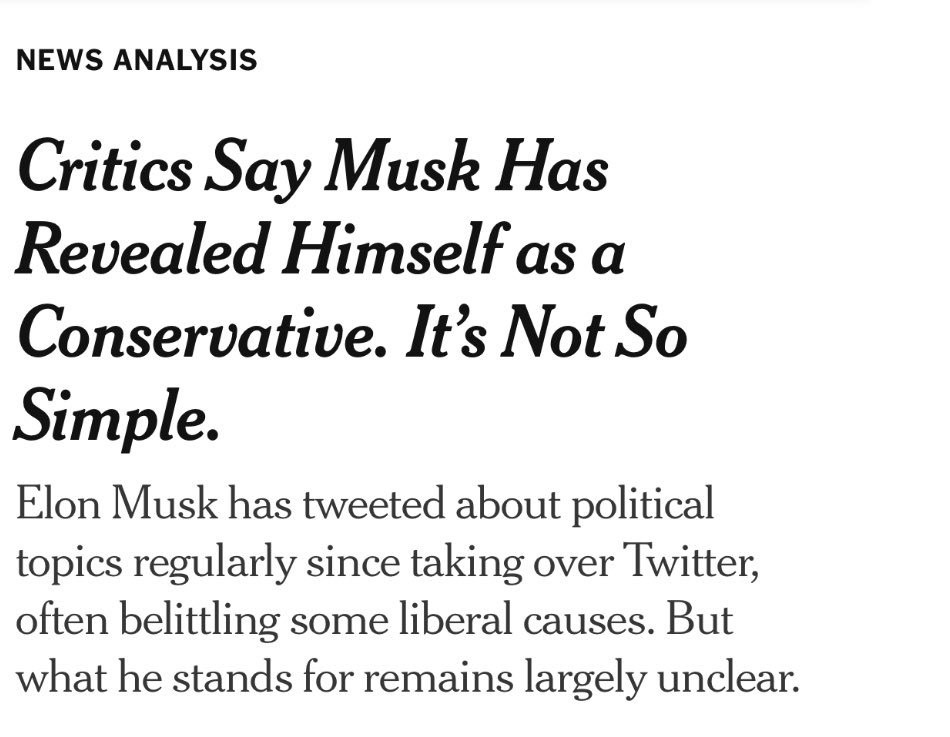 Yes, it is weird that the ego formerly known as Kanye West is the one mainstreaming revisionist glowing takes on history’s biggest ever monster, Adolf Hitler, a right cunt, but that doesn’t make his sock-faced antisemitism any less alarming. Whenever men driven by hate are afforded platforms this large, disaster always follows. If anything it’s worse coming from Kanye than your typical punchable supremacists like David Duke and Richard Spencer, because, for all his faults he’s clearly an extremely influential salesperson – just look at how ubiquitous and popular his buttfuck ugly shoes were.

The climate crisis continues to worsen, too. More than 33 million people were displaced in the Pakistan floods. The scale is difficult to parse. There aren’t that many Australians alive today.  On this front humanity’s larger picture is so bleak that today’s youth are developing exciting new forms of anxiety all their own – a brand spankin’ new spectrum of existential dread disorders in response to witnessing one’s own species enthusiastically bringing about its own end.

It was not all bad, though!!!! Bucking recent trends, a few good things happened this year. Much of the world went a calendar year without a lockdown for the first time since 2019! The Socceroos were heroic in Qatar. Kenobi and Andor fucking ruled.

Scott Morrison, former Prime Minister, former treasurer, former health minister, former finance minister, former home affairs minister, and former minister for the Department of Industry, Science and Resources, was consigned to the dustbins of history and future cameo appearances at inquiries into why his government was so callously inept.

Josh Frydenberg discovered that repeatedly attacking his home state during a health crisis had made him rather unpopular amongst the locals, losing his seat to Dr Monique Ryan, one of the teal independents upturning Australia’s Parliament. Wise insider Peter van Onselsen once touted Josh (and Christian Porter) as the future of the Liberal Party – if the future of the Liberal Party is unelectable irrelevance he was bang on the money for once.

And, my favourite thing, other than Andor – the neoliberal era is clearly finally over. Or, more accurately, the edifice of credibility erected around this vampiric economic model – a narrative subconsciously and overtly smashed into our brains from all corners until it became the invisible natural order – is at its end. The myth that wealth trickles down has collided with reality so obviously and so abruptly and so disastrously that the world’s Overtown Window – the parameters of what we deem normal – has had a lurch leftward towards sanity, away from celebrating greed, championing economic inequality, and the right of might to rule. It is no longer credible, and even markets react accordingly. Look at the Liz Truss Prime Ministership. She did everything the nuttiest Milton Friedman zealot could ask for (essentially the UK’s version of the Stage Three tax cuts that the Labor Party is cowardly insisting on following through with) and was rewarded with a crashing economy, the shattering of the public and media’s faith in her ability to face up to reality with anything other than ideological zealotry, and the end of her time in Downing Street. Given this economic model has brought the species to the brink of ecological collapse, its death as a credible system can only be a good thing.