As the world takes a deep breath after the Trump, Johnson, Morrison era and we look forward to addressing the shitstorm left behind, there is one Voltaire quote we will be hearing a lot more of: “Don’t let the Perfect be the enemy of the Good”. It’s the political philosophy of Prime Minister Albanese, Former PM Turnbull and a favourite of  “sensible centrists” and every time I hear it I want to fucking scream.

Don’t get me wrong, I love the idea.

I think good is… well, good. Like, a nice B Grade. Sure an A would be great/exemplary but there is no room on the scale for ‘perfection’ because that isn’t realistic.

For context, Voltaire was a revolutionary writer fighting for freedom. He knew progress is progress, especially when battling a broken oppressive system. For him, the “good” was abolishing slavery and the “perfect” was toppling the entire system that was built on slavery.

But alas, for me the phrase has been tainted by those who use it the most, the political players who are scared of enacting real change, distorting the words of a revolutionary in the process.

Take climate change. PMs Albanese and Ardern recently put out a joint-statement calling for nations to fight for climate action and prevent a two degree rise in ocean temperatures.

This language on climate change in the joint statement from Albanese and Ardern would have been unthinkable under the former Morrison government. #AusPol pic.twitter.com/qeKOvWC2Yv

A call to action based in science, setting the bar for bare minimum to saving the Great Barrier Reef and securing the future for young people like myself and future generations. 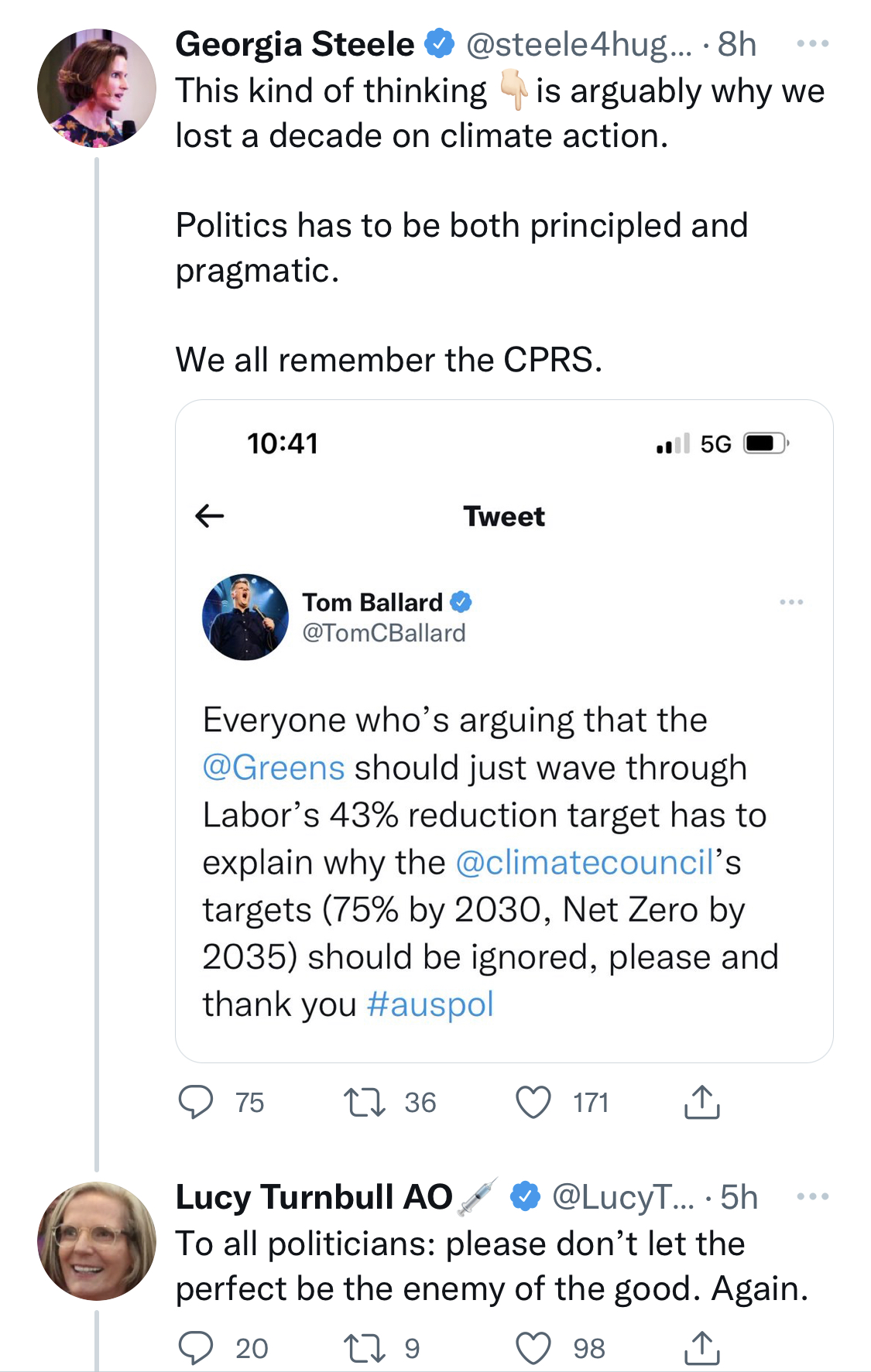 How is failing to meet the bare minimum, the “good”?

We got rid of Morrison but the policy not being a trip to Hawaii doesn’t make it “good”.

But another thing in that interaction is something these centerists love to do, which is bring up the Greens voting against Rudd’s CPRS policy. But that policy also didn’t meet the bare minimum, and intentionally ignored the scientists, which is why Gillard brought in a better policy when facing the same pressure Rudd did.

So, instead of Voltaire, surely it would be better to say:

Politicians work for us and get paid a fuck tonne for it. They then try to dictate to us what their workload is, then they choose to fail to meet that and then have the gall to defend it as “good” because it is better than nothing?

Well, if that’s how the world works, congratulations! You don’t need to go to work every day, just show up on Friday arvo, tell your boss that it’s good enough and rake in the cash baby. WOOHOO.

When operation sovereign borders was brought in by Malcolm Turnbull, the idea of listening to experts and shutting down the detention centres and instead helping fund safer ways for refugees to get to Australia, like other countries do, instead of sending them away or locking them up in detention centres, in clear human rights violations, was reframed by the major parties as ideal and therefore the “perfect”. Meaning treating refugees in need with dignity was the fucking “perfect”, lowering the “good” bar to inhumane levels and implying the “perfect” is impossible.

This fucked framing was so popular that Q and A had a segment called ‘Greens – Enemy of Good‘ specifically slamming the fucking idea that treating people humanely is worth the price of standing up to racist fearmongering.

So again, what about:

The conversation still runs the same today, just with an added bonus of saying the new system would be expensive and budgets are tight. Framing it in a way ignores that the budgets keep including the billions we spend on keeping Nauru open, the still increasing fossil fuel subsidies and the constant tax cuts for the rich, all bad things, using money that instead could fund the “good”.

That same excuses can be seen time and time again. Welfare, Trans rights, Indigenous rights. This list goes on and on. When people call politicians and commentators from all sides on this, they default to saying it’s “pragmatic leadership” and “compromise”.

Cowardice driven by a lack of urgency because these rich fucks aren’t skipping meals to try make rent, they aren’t having their rights stripped from them, they aren’t locked up in a detention centre being tortured because they dared want to live a life of peace, and they aren’t going to be the ones explaining to future people why they were brought into a world on the brink.

A cowardice that is emboldened by setting the bar for “perfect” at the bare minimum and the bar for “good” at “better than Trump and Morrison”. If that was the bar then we may as well just make a Magic 8 Ball the Prime Minister.

When they run out of excuses, their last line is always that they’re out of “realistic” options and we must take it or we get nothing, talking down to us like we’re their spoilt children at dinner.

In my short lifetime, I can think of only one time we said “no, try again” to that ultimatum and the result was same-sex marriage becoming legalised nationwide.

That’s right, during the same-sex marriage debate, Malcolm Turnbull told the queer community to settle for “civil unions” without abortion rights, saying “Don’t let the Perfect be the enemy of the Good”.

We called his disgusting bluff, demanded action, and thank fuck we did!

Australia we deserve the “good”, the real “good”. Next time those in charge try telling us that “good” isn’t possible, tell them to shove it and come back with the “good”. Because longer we wait for the “good’, the longer those in need suffer the consequences.

Stop letting the powerful weaponise a quote from a revolutionary against the masses and let’s demand this allegedly progressive party prove they are progressive.

Don’t let the Cowards be the enemy of the Progress You Deserve!

Now, if anyone wants to tell me that I’m wrong, please email ‘[email protected]’. I know that isn’t the “perfect” solution to this “debate” but he probably has a worse take, so fuck it.

Why the ALP should DLP the LNP
Help us bring you the good news
Our writers can't be paid in exposure, but they sure can die from it. So if you like the stories on The Shot and would like to become a supporter, we'd welcome the money. Just $1 a month is enough for us to keep publishing stories.
Support The Shot
Sick of this notice? Click here to never see this bar again.
Do NOT follow this link or you will be banned from the site!