General News
What is the point of Prime Ministers if they’re like this?
August 13, 2021 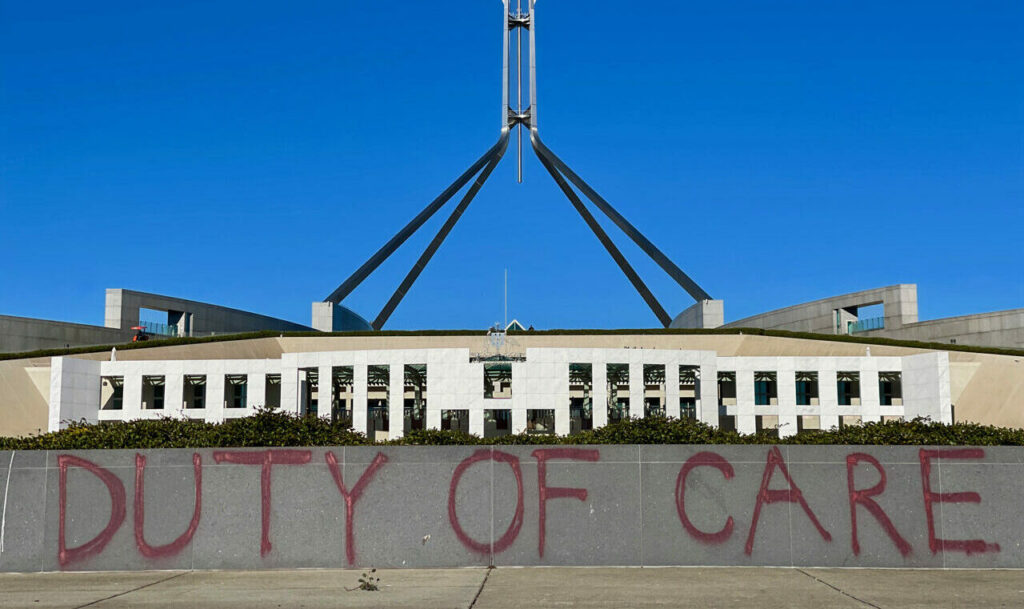 Scott Morrison, Sharkies fan and alleged curry chef, took to Parliament House this week to address Australia’s worst in the developed world vaccine rollout and its worst in the developed world climate change commitments. On both these existential crises, he assured the nation’s sometimes-trollied-at-work politicians and largely pointless journalists that his Government would continue doing the fantastic job it’s not currently doing, the gaslit recovery rolling on.

Very few races begin with a competitor telling the finish line to piss off and go away, but here we are. Hell yeah, Team Australia.

Morrison’s sentient flagpole mascot function is one of his few genuine strengths. More brand than man, thumbs raised, “how good?!” hucked whenever things aren’t particularly good. Routinely imploring us to watch the cricket or the footy or wander the aisles of Bunnings, which people in NSW can still do, rather than noticing the rort, the theft, the fires, the rape. We do have better mascots (can a basketball team be PM?), but none are so single-mindedly committed to the role at the expense of all else.

Over the weekend, Morrison’s Health Minister Greg Hunt appeared on Insiders, the ABC’s wettest fart, and talked his way around the Government’s failure to secure a deal with Pfizer in mid-2020. “There was no other deal available,” he said carefully, and repeatedly, of a company that had already signed on for more than a billion jabs at that point with countries other than this one. Hunt’s statement does not hold up to an ounce of scrutiny, but that’s what David Speers is for.

Australia’s ongoing confusion about whether vaccination is a race or not is compounded miserably by the fact that not a single purpose-built quarantine facility has been constructed since the pandemic began, an era that has seen millions of Australians spend two-hundred-and-fuck-knows days in lockdown. The will to shore up Australia’s leaky hotel quarantine network ultimately lost out to the desire to harangue Daniel Andrews while it was politically advantageous and sing the praise of Gladys Berejiklian while doing so felt less ridiculous. The sacrifices of so many, squandered by so few.

Which is a pattern, by the way. Shifting to the second crisis on the agenda, the fossil-fuel induced warming of planet Earth, the place most of us live, Morrison, standing outside Parliament House, Morrisoned Morrisonly: “What I am saying today is what I have been consistently saying for a very long time. Australia under my Government will have a plan to achieve what we are setting out”. Which means exactly as much as you think it does.

Australia does not have a 2050 carbon reduction target, and the 2030 target of 26-28% is the OECD’s weakest commitment. And we won’t even hit it, even when we don’t count the fossil fuel emissions we export to other countries, one of the few areas in which we lead the world. Our current trajectory is a path to net zero by 2167.

When asked directly by a journalist, “will you embrace the target of net zero by 2050 and will you go to Glasgow,” Morrison responded by blanking the question and pointing to another journalist, “Kath had her hand up.” Which is just the height of courtesy. Lovely stuff.

The PM’s latest round of climate squirming was triggered by the release on Monday of the sixth Intergovernmental Panel on Climate Change (IPCC) report. UN Secretary General António Guterres described it as “code red for humanity.” It’s a barrel of laughs.

Essentially The Day After Tomorrow in PDF format, the report confirms and strengthens already strong evidence of what we’ve known a long time. Sea levels have risen and will rise, global temperatures have warmed and will continue doing so, and the extreme weather events we’re already experiencing more frequently will become more frequent, more extreme, and more deadly. The things smart people said would happen in 20-40 years, 20-40 years ago, and that the Coalition said wouldn’t, are now unequivocally happening.

But there is also hope in its pages. It maps out a number of scenarios for the severity of future human misery, from an apocalyptic rise of 5 degrees celsius, in which basically only the uber rich survive, living out what I assume will be a largely dome-based existence, a hot-rods and pointy sticks gladiatorial shitfight, to the best case scenario of the already locked-in rise of at least 1.2 degrees – a far better outcome. The future we hurtle towards, entirely dependent on what we choose to do about it right now.

Reaching into the Liberal Party’s sack, Morrison blamed China and India as heavy carbon emitters while failing to draw a link between his shortlist of naughty countries and the places we sell lots of coal to. He then singled out for praise our hole-owning billionaire oligarchy, Andrew Forrest et cetera, and rolled out his next catchphrase with despair-inducing enthusiasm: “technology not taxes”.

“Focusing on political solutions won’t solve this problem. Focusing on technology solutions will,” he said, all but outsourcing yet another part of the job to someone else.

Unlike most Liberal Party three-word slogans, “technology not taxes” almost feels like a threat. Tech and these people do not mix. The CovidSafe App has discovered 17 cases of coronavirus. The RoboDebt scheme drove a staggering number of poor people to suicide. The Abbott/Turnbull/Morrison era saw the rollout of hundreds of thousands of kilometres of sparkling new copper wire for our National Broadband Network, instead of the actually cheaper, faster, better fibre-the-whole-way plan competent countries opted for. And electric vehicles – a technology, not a tax – were demonised at the last election and painted as the “death of the weekend” (mate, wait until you hear about coronavirus!!).

Having committed to a slogan and little more, Morrison turned to his remarkable ability to be annoyed at the inconsequential when faced with the substantial, a trait as reliable as a Cartier watch, chastising the Extinction Rebellion protesters who had spray painted their own slogan, “duty of [care]”, onto Parliament House, location of the parliamentary prayer/fuck room, the jizz desk, the place Brittany Higgins was allegedly raped, the chamber Morrison waved a lump of coal around inside of, the soiled building he spends his time ensuring a small clump of people make billions of dollars out of the continued destruction of the planet’s climate – once again, the place we all fucking live.

Australia has rarely meant less than it does now: passports nerfed, citizens abandoned overseas, the future of all our children sold out to the highest bidders, states with Labor governments chastised and undermined relentlessly during a deadly global health crisis, splintered and walled off kingdoms managing their own affairs in lieu of a Federal Government with the will or competence to be more helpful than this.

The pipeline of big-picture shit news gushes relentlessly, and 12 million locked-down Australians have little to do but strap their faces to the torrent and quaff on the runoff. Press conferences and premiers, life and death, updates on the ever-shifting legal status of being outside. And the Prime Minister, somehow central and tangential to all of it, is a dispiritingly convincing argument for six simultaneous secession movements. It would only formalise the way things feel anyway.

In a saner world, making the lives of every human that will one day be born more miserable than they need to be wouldn’t be this electorally popular. That people aren’t hurling rotten fruit at this man everywhere he goes speaks to both the incomprehensible scale of this problem, the stasis and denial humans willingly accept as epochs shift, and the demented national conversations had in places with sophisticated propaganda networks disguised as news media.

Whether the ALP can get its shit together or not, one day Morrison will be gone. It is small solace, though, because there are many Morrisons. He is an archetype as much as a Prime Minister. A climate criminal, a neoliberal funnel, a stooge to the oligarchy. For humanity to pull itself out of the avoidable climate misery that we still can – which we should do, I live here – almost everything Morrison stands for needs to be rejected, the things he says scorned, and his entire platform eviscerated for the irresponsible bullshit it is.