General News
Why everyone (except me) was wrong about the Victorian election
November 29, 2022 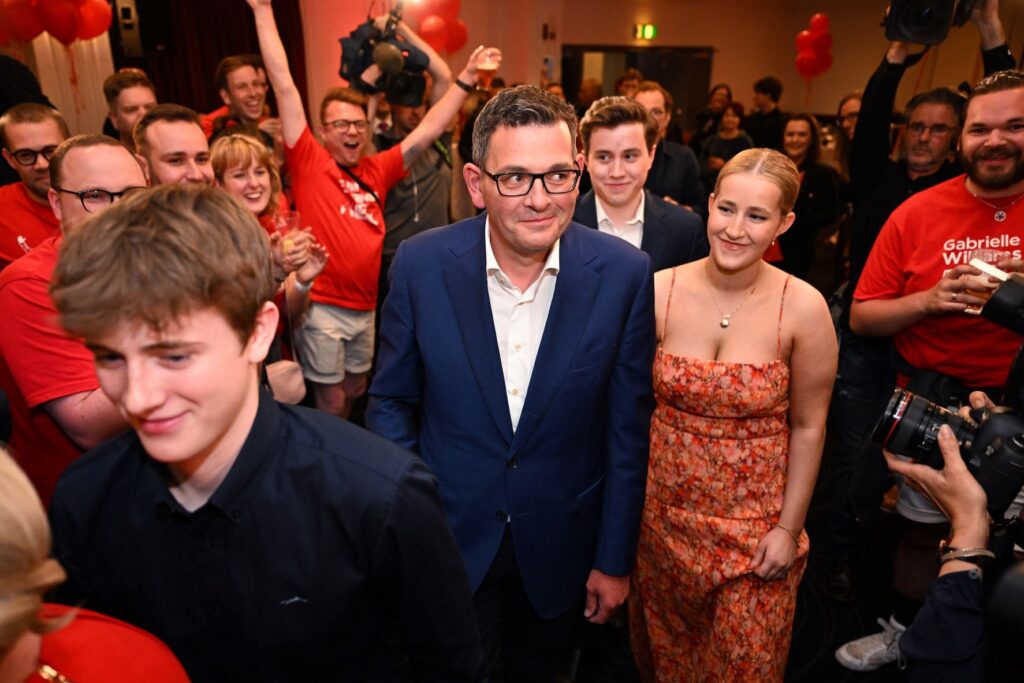 Let’s get this out of the way quickly because it’ll allow me more time to be as obnoxious as I can possibly be. I was extremely correct about the Victorian election being a casual stroll in the park for the sitting Premier, unlike, mysteriously, nearly all of my journalistic brethren. The odds-on heavy favourite Daniel Andrews won his third term with a predictable majority no one else in the media seems to have predicted. 🤷‍♂️

As the only journo in the state that got the election result right, I'm gonna give away my trade secret: I live here and it was obvious.

As the Correct One, I feel duty-bound to impart some knowledge onto my peers. Know that I do this out of love and love alone, but also out of a desire to avoid further embarrassment by association. Basically, the rest of you are making me look bad, so smarten the fuck up.

In the weeks leading to the election, the Murdoch narrative morphed from insinuating Dictator Fidel Dandrews broke his back on little bitch steps in Sorrento (OR DID HE?! DUN DUN DUN) to feeding the Cooker fever dream of a state-wide uprising against Communist tyranny.

The phrases “minority government” and “upset” started flying. Matthew Guy was given once-valuable page real estate to look like a functioning human and viable alternative, and the heat was turned up on the Premier by pretending the vote was tighter than any poll was actually predicting, seemingly based entirely on the anecdotal musings of the city’s angriest, most Nazi-adjacent café owners. 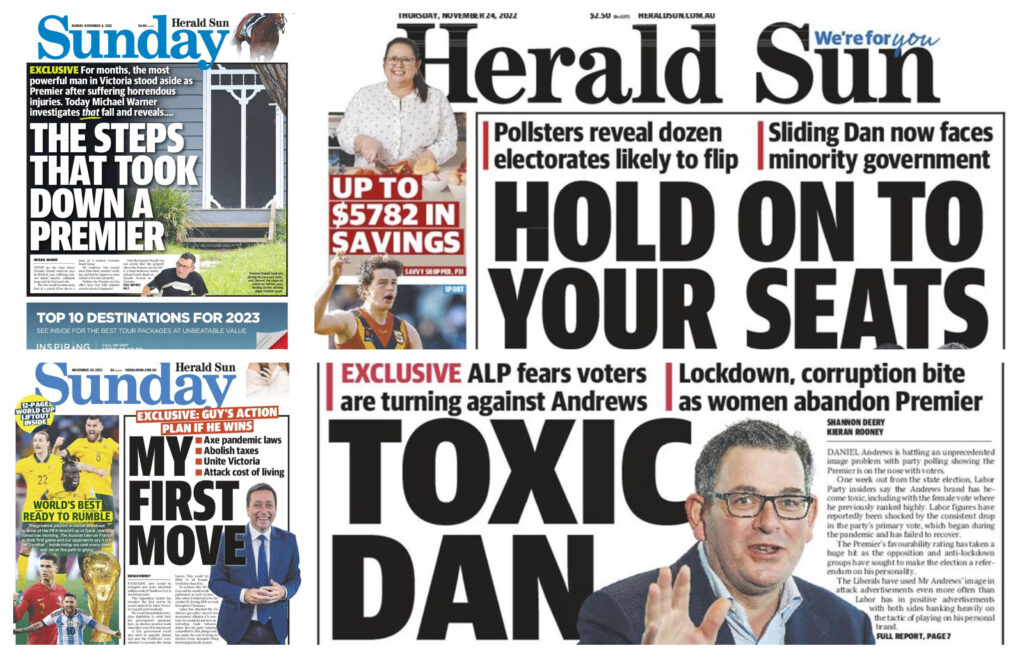 We all saw what happened next. One section of the media would huff the farts of another section before unleashing its own noxious brew, a re-concentrated dose of this particular brand of disconnection from reality. Dan was in trouble, Matt was on the charge. And thus was born an ouroboros of regurgitated delusion.

The rest of the media treats Murdoch with far more reverence than the public does. The ABC’s Michael Rowland repeated Peta Credlin’s bizarre usage of the phrase “Victorians have baseball bats out for Daniel Andrews”, a faux-truism at odds with democratic results and a bizarre choice of words in a campaign featuring violent death threats from far-right candidates. The Hun’s James Campbell appeared on Insiders the day after the election and wasn’t pressed even slightly on his relentless, deranged and dangerous campaign of unreality waged against the sanity of Victorians. And Greg “submarine boy” Sheridan, slouched on Insiders the week prior, uttered something eerily similar to the take that would later make Bevan Shields, editor of the SMH, delete his Twitter account, so remorseless and deserved was the ensuing public dunking. 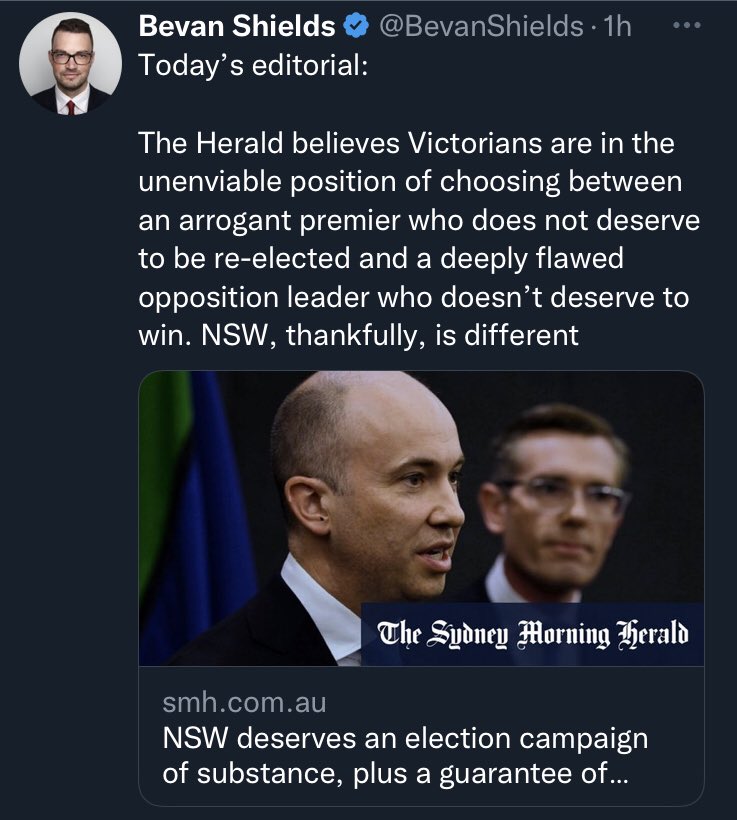 This is what happens when the rest of the media treats the Herald Sun as a reputable source of news and not what it actually is: a dossier of Liberal Party campaign material interpreted via the mushy keyboards and mushy minds of the state’s thickest mouthpieces for a ghoulish arch-conservative oligarch. That this class of commentator cannot fathom a genuinely popular progressive-ish government and the willing community buy-in on pandemic health measures in a pre-vaccine world says far more about corporate media than it does about Victoria.

I have many flaws, but treating the Herald Sun seriously is not one of them. As a result, eleven days ago I was able to predict the extremely predictable outcome that everyone but the newspapers predicted: 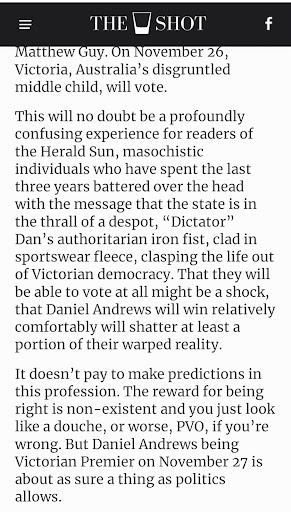 And because I got this extremely obvious thing correct I don’t now need to spend the days following the election pretending that winning, when you think about it, is really just the same as losing.

And I don’t need to pretend that Victorians are pitiful and deranged hostage victims like the whackos who Victoria continues to shun at the ballot box.

And because I have a high-school understanding of preferential voting (and know not to throw chopping boards at anyone!!) I don’t think the candidate with the most support had the least support.

And because I was expecting this result, alongside every sane person that lives here who paid a modicum of attention to our immediate surroundings over the last few years, I didn’t look like this on election evening. 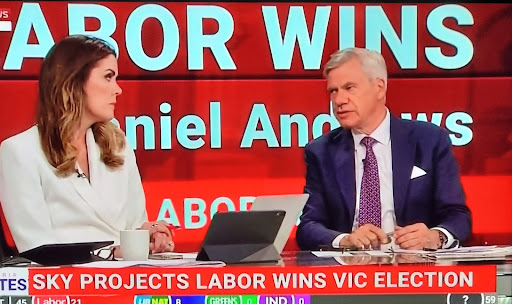 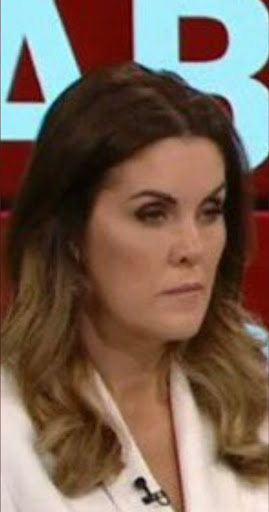 But this isn’t about how right I am (though I am, extremely). It’s about how wrong everyone else is. And we need to talk about this, not just because it’s good for my brittle self-esteem, but because this isn’t a great situation.

An alternative reality was concocted and sold to Victorians in an attempt to manipulate our election. And while it’s reassuring that the ploy fell embarrassingly flat, it is particularly disturbing in this instance because getting this right was sooooooooooo much easier than getting it wrong. I cannot stress how obvious Daniel Andrews winning this election was.

So, esteemed media colleagues, how did I work this out when the rest of you got this so wrong?! To take you inside with a little tradecraft, I looked at polling data and betting odds that uniformly said this extremely obvious thing was going to happen. I then observed Victorian politics, spoke to Victorians, and just generally was a Victorian. On top of that, I discounted the predictions of the angriest and least vaccinated sections of the citizenry (I think this is where you guys went wrong!!!?), applied my analysis to the odds of the obvious thing happening, and decided that yes, it was obvious the obvious thing would happen, obviously.

By virtue of living here, I worked out that the unhinged individuals protesting lockdowns and vaccine mandates every weekend, still, to this day, were a noisy but tiny mob pissing off the Uber drivers and revellers and tourists and small business owners – a sentiment indicative of the extreme end of the right-wing spectrum and not an electorally significant force to pivot a major political party or daily newspaper around.

I also had two professional advantages over much of the mainstream media: I didn’t need to massage my words into shill-ery for the Liberal Party, and I didn’t need to create a tight, nail-biting, ratings-generating contest that was never going to eventuate. That wasn’t even in my personal interest! I wanted the election over by 9pm so I could watch the Socceroos like a normal person.

Treat this election result as reassuring affirmation you’re not going nuts. Yes, you’re not crazy, it really was fucking obvious Daniel Andrews was going to win. The staggering thing about the Herald Sun in 2022 is that you’d be a better informed individual if you read nothing about politics at all. For the duration of this campaign, Murdoch’s soiled sheet presented a skewed reality to Victorians, and the rest of the industry played on their terms using their language. But the actual election result provides a clearer lay of the land: it proves the Herald Sun is a fringe fanzine for frothing extremist nuts and little more.