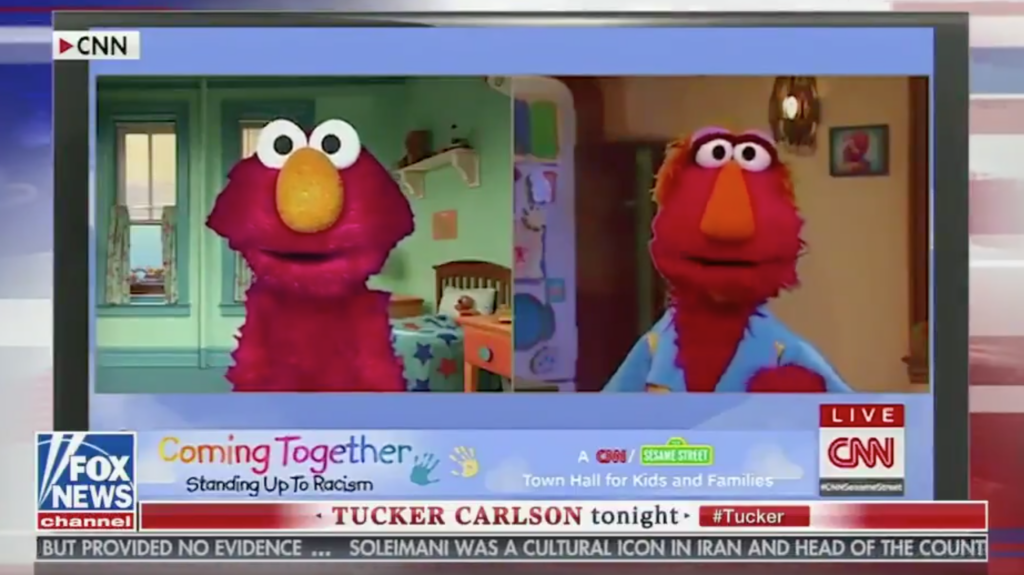 Fox News talking hood Tucker Carlson, who once said letting poor immigrants into America makes it “dirtier”, has attacked Elmo for his anti-racism message this week.

The really weird rebuke followed a one-hour collaboration between Sesame Street and CNN, which discussed the George Floyd protests in a way younger children could easily understand.

Elmo’s dad, Louie, explained to his son and the children of America, that the protestors: “are sad and upset, and they have every right to be, Elmo. People are upset because racism is a huge problem in our country.

“Racism is when people treat other people unfairly because of the way they look or the colour of their skin… What we are seeing is people saying, ‘Enough is enough.’ They want to end racism.”

Carlson, who in 2019 called white supremacy a “hoax”, was visibly disturbed by the uppity muppets and their message of equality and justice, saying on Tuesday night: “It’s a children’s show! Got that, Bobby? America is a very bad place and it’s your fault, so no matter what happens, no matter what they do to you when you grow up, you have no right to complain. That’s the message and it starts very young.”

The outburst followed a similar incident the night before when Carlson ranted: “This may be a lot of things, this moment we’re living through, but it is definitely not about black lives. Remember that when they come for you, and at this rate, they will.”

It’s not entirely clear whether Carlson’s threatening “they” should be read in the overtly racist way it sounds, or if he was referring to muppets.