World
Hey America, here’s how your fires are going to play out
September 10, 2020 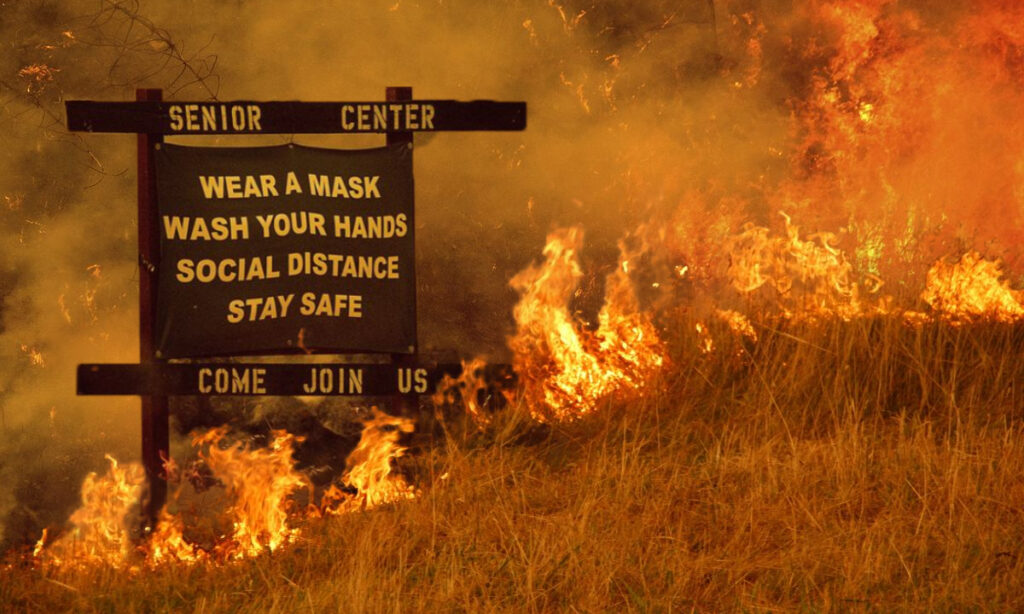 So your country’s on fire. Don’t worry, we’ve all been there. In fact, this whole process is so predictable at this point we can pretty much give you a step by step guide about how all this is about to play out.

Step one: Your skies turn red. Pretty scary huh? Don’t worry, us Aussies went through that for two months last year, and we’re all still mostly here. Upside for you all is you’re already wearing facemasks (kinda), so you get to skip right over step two!

Step two: The Great Mask Debate. Do they work? Well not really no. Unfortunately for all of you, you’re mostly wearing masks to stop a virus from spreading via saliva droplets. And in a very unfortunate twist of fate, Australia learned the hard way not twelve months ago after wasting a lot of our needed supplies, that you actually need P2 facemasks to stop smoke inhalation. Does it matter? Not really, most of us didn’t even bother wearing them in the end anyway, which I’m sure you can all relate to.

Step three: Blame the greenies. So the scientists who have spent their lives studying this stuff have been warning about these exact fires for decades. Like, since about 1980 if you want to start counting when they really got certain that things were about to start going very wrong. You’d probably be surprised just how much has accurately been predicted if you spend about a week of your Christmas break reading through hundreds of scientific papers so you can ward off trolls who… well we’ll get to that in a moment. But the point is that surprisingly, despite scientists accurately predicting these fires, the ice caps melting, and coral bleaching almost to the exact month, a lot of very angry people who have never read a scientific paper in their lives will try to convince you this is all just a very odd coincidence. Newspapers that may or may not be owned by a prunish old billionaire will try very hard to convince you that this one retired scientists who says climate change is a myth is just a good an authority as the thousands of others who say, no these fires are caused by climate change. And if that fails they may just start printing outright lies about what climate researchers are saying, and then issue tiny apologies in a corner of their paper days later when the researchers complain that they never said any of that. And yes, all of that happened in Australia. James Murdoch even ended up quitting News Corp because of it, so strap yourselves in for the Fox News hosedown coming later this week.

Step four: The trolls. So how do you convince people that fires that have been predicted for years aren’t actually caused by the thing they are caused by? Simple, blame the people trying to stop them. Pretty soon you’ll start hearing arguments about how the fires aren’t caused by climate change at all, but really those left wing environmentalists are to blame. Or backburners. Or sky lazers designed to clear land for a conspiracy to build super fast trains (yes that was an actual big conspiracy in Australia). Here Down Under it was the Greens Party who had the finger pointed at them as being the “real cause” of the climate fires. Apparently, despite not holding government anywhere in Australia, they were solely responsible for preventing backburning that the fire services said had been completed as much as possible, and for anti-starting-fires-close-to-homes legislation that was designed to prevent these exact kinds of fires from taking people’s homes. These “the environmentalists started the fires” messages will start cropping up everywhere you look, surprisingly in unison, almost as if a large petrochemical company was paying vast sums of money to spread the idea that climate change is false, just like they have been repeatedly caught doing in the past. So prepare for your social media feeds to become even more insufferable than usual.

Step five: This_is_fine.jpg. As the fires rage on, the skies stay red, and the air remains unbreathable, eventually everything will return to a state of disturbing normalcy. You’ll find yourself going about daily chores as the sky rains ash on your washing. Walking to the shops while you try to remember what the sun looked like. And casually opening a window for some fresh air before remembering it’s less fresh outside than in. This is when the reality will set in that this could be the new normal, and this is also when you will likely decide that something must be done.

Step six: Hope. If America is anything like Australia, and let’s face it, it’s more similar than we like to admit, these fires will probably be the last straw for a lot of people who have sat by hoping their government will step up any day now to actually address that elephant in the atmosphere. It’s the moment you’ll probably realise that no, nobody’s going to do a damn thing, and your kids are going to grow up in a world where seeing a blue sky might one day be a luxury. It’s the moment that people power will for the first time outweigh lethargy in the need to address what we are doing to our planet, and it will outweigh the power of vested interests who will happily pour millions of dollars into propaganda to keep you on the fence if it means not having to give up the billions they make in investments in coal and oil.

There’ll probably be protests, there’ll be anger and frustration thrown at politicians, and sections of the media, but more importantly there’ll be the question, what can I do. In Australia there has been a huge push towards ethical investments by super funds, our giant retirement savings deposits that for too long have poured the ten percent of paychecks invested by the public into companies that have the opposite of our futures at heart. We saw multiple boycotts spring up against climate denying media, spelling the end for one of our most infamous radio broadcasters and contributing to a billion dollar loss reported by News Corporation this year. We saw people in those organisations finally take a stand and walk out. We saw others demand accountability from their bosses. We saw thousands turn up across capital cities to demand action on climate change, even as the air was clogged with smoke. We saw sections of the media not under the thumb of billionaires finally work up the courage to call out climate change for what it is, without fear of accusations of left-wing bias, and we saw that message spread far and wide across the internet at billions watched on as our country burned.

Step seven is in your hands. The choices you make, the politicians you elect, your investments, discussions, and activism all make a difference. You get to decide right now, today, what kind of future your kids are going to live in. Whether every year for them be like 2020, or whether you will stand up and demand the change.