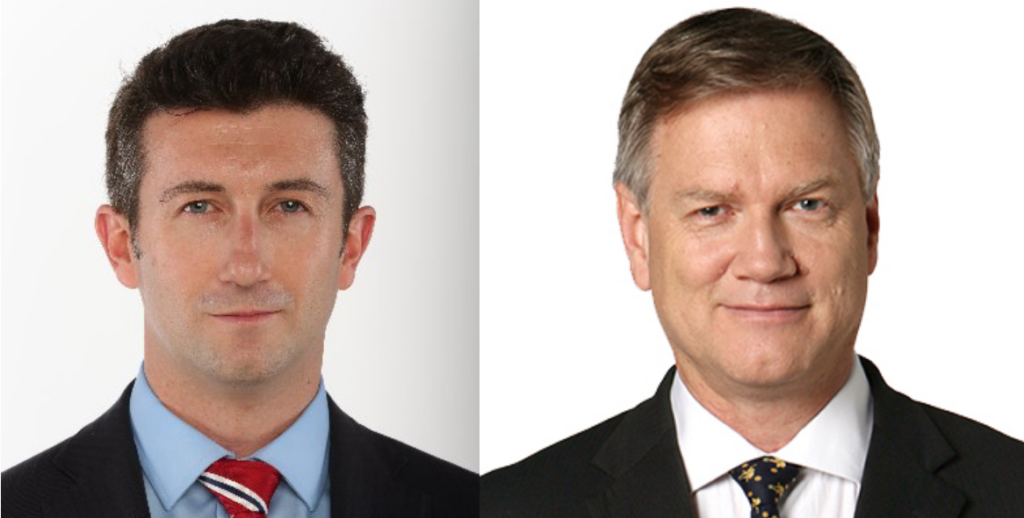 This week, Melbourne moves into its strictest lockdown yet. Jigsaw shops will be forced to close. Hairdressers, bafflingly open this entire time, will shut, no one having mastered the art of telekinetically wielding scissors across 1.5 metres over the last few months. And daycares, lord help me, daycares are closing. Shit has gotten real.

Normal, sensible people understand this will hurt but it’s for the longer-term good. Halting community transmission is how we recover a semblance of the Before Times, or at a minimum a smidgen of the Early Pandemic Era, the Tiger King and Sourdough Epoch, when the aforementioned shit didn’t seem quite so real.

But it’s only part of the solution.

Because if workplaces were the fuel of the coronavirus inferno, dickheads are its embers, threatening to start spot fires.

And this specific variety of dickhead-herding requires more than brute force to quash. It requires reprogramming. Because the Karens bored of walking around Brighton, the Sovereign Citizens storming Bunnings wielding the 1948 UN Human Rights Charter, and the men on an in-normal-times-noble-but-not-right-now quest for a “specific” butter chicken – these dickheads are acting upon the exact same privilege spewn and encouraged by Murdoch’s overpaid frothing picture bylines.

That needs to be reprogrammed.

The most dangerous workplace for the coronavirus’s continuing spread is the Murdoch opinion factory. It’s a significant health risk that should be closed under Stage 4 restrictions, or, at the very least, treated like Melbourne’s other meat works and forced to reduce its output of tripe and offal by two-thirds.

(Murdoch op-eds are also far from essential services: there are plenty of other places we can get our race-baiting from.)

On Sunday, when Victoria announced its State of Disaster, The Australian’s Adam Creighton was first up to the stumps.

“Shameful what’s occurring in Victoria. Effective dictatorship declared. Devastating, destructive power of the state on full display. Respect for the individual clearly irrelevant. What’s the point in being alive if you can’t live?” he tweeted.

This is a man who just weeks earlier lamented the fact there were only 17 people in Victoria’s ICU beds, while “107 Victorians are dying EVERY DAY from other causes” – seemingly arguing we shouldn’t deal with the novel coronavirus until we have defeated our oldest foe: death itself.

On July 20, as masks became mandatory in Victoria on the basis of rigorous, peer reviewed scientific consensus, Bolt wrote: “I no longer trust what Premier Daniel Andrews says about the coronavirus. That includes his latest order to Victorians: wear face masks. On what medical basis is this necessary?”

On what grounds is commentary of this sort at all helpful? What do the people of Melbourne gain from it other than longer lockdowns and more death? Daniel Andrews isn’t changing tactics now because a guy that’s been begging to play golf this entire time still wants to play golf. The only possible, tangible response to these column inches is more dickheads and more death.

Bolt’s position on the coronavirus has held firm since day one, because none of it is based on evidence. It’s based on ideology. New information has not yielded any significant adjustments.

As early as January 2020, in a Sky News broadcast entitled “A real pandemic would look more deadly than the coronavirus,” he opined:

“There’s one more protection I think you should consider: how about building up some resistance – resistance to the emergence of panic. Panic about the fires, panic about global warming, panic about this coronavirus, panic about almost anything nowadays. Please, do you know how bad panic is for your health?”

With 700,000 global deaths today, his tune today is as irresponsible as it was in January. On August 2 he wrote, “Victoria, don’t accept this!” all but pleading for open defiance of curfew and lockdown. Once again undermining faith in the public health response, once again stoking the fears of the unhinged conspiracy prone amongst us.

And before you retort: this isn’t a free press issue. Bolt and his ilk are not press. They’re conspiracy theorists and propagandists for the death cult of unfettered capitalism.

They miss golf. They miss booming investment property portfolios. They miss being able to blame all of society’s systemic ills on the millennial fondness for smashed avocado. Mostly, though, they miss when it was only other people – poor people, immigrants – being inconvenienced by the law and disadvantaged by the market. And they’re more than happy to watch the bodies pile up to get these things back, just as long as they don’t need to wait another second. 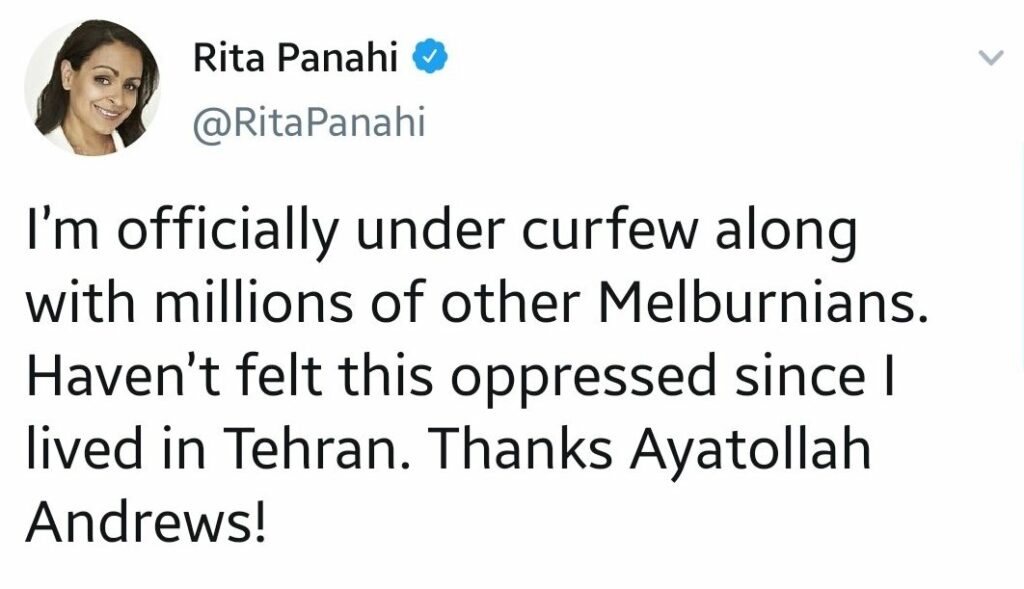 I can’t actually link to this tweet because Rita has mercifully blocked me.

They’re Pete Evans in better suits, David Icke with the stuff about Reptilian Overlords scrubbed by an overworked ever-more-desperate copy editor. They have more in common with Alex Jones and the Facebook groups spreading 5G Bill Gates memes than they do with real journalists, they’re just better at saying the loud part quietly, vieling the lunacy with neater hair.

But hairdressers are shut as of tomorrow so who knows if that facade will hold up?

All of this matters because unfortunately their words do have real-world impact. Multiple studies in the USA have linked the consumption of far-right media with both low levels of mask wearing and disproportionately high levels of death.

On June 25 The Washington Post reported that one such study concluded, “infection and mortality rates are higher in places where one pundit who initially downplayed the severity of the pandemic — Fox News’s Sean Hannity — reaches the largest audiences.”

Irene Pasquetto, chief editor of the Harvard Kennedy School Misinformation Review, the publisher of this study, told the Post: “We are receiving an incredible number of studies and solid data showing that consuming far-right media and social media content was strongly associated with low concern about the virus at the onset of the pandemic.”

Make no mistake, Murdoch’s local mouthpieces are of the same breed, have the same paymasters, and spread the same dangerous misinformation. It’s not a stretch that they have the same devastating impact.

“Coverage of the kind described here exploits anxiety and feeds those natural human impulses, leading to social division and resistance to medical advice,” writes Denis Mueller, senior research fellow at the University of Melbourne’s Centre for Advancing Journalism, in The Conversation. “Both these consequences work against suppression of the virus. That is why it represents a clear and present danger to society.”

Murdoch columnists are a health hazard and Melbourne, right now, would be better off without them.

All of this is in response to their comments in the heat of the pandemic, and doesn’t even begin to consider the long-term impacts of decades spent advocating for cuts to public health, privatisation, the severing of workers rights, and increased casualisation – precisely the factors that have caused the coronavirus to spread faster and more devastatingly throughout the world.

There’s nothing uniquely Victorian about this outbreak. It doesn’t spread predominantly in art-filled laneways. It isn’t weaponised by close proximity to quality macchiato.

It spreads through underfunded health systems. It spreads through private aged care homes where profit margin and quality of care are at odds. It spreads because workers in unstable jobs don’t have paid sick leave or the negotiating power to stand up to their bosses and stay home. And it spreads when individuals don’t do the right thing.

This isn’t just a Victorian outbreak. It’s an outbreak of Murdoch.