General News
Nazis prey on the disenfranchised and angry. So does News Corporation
September 24, 2021 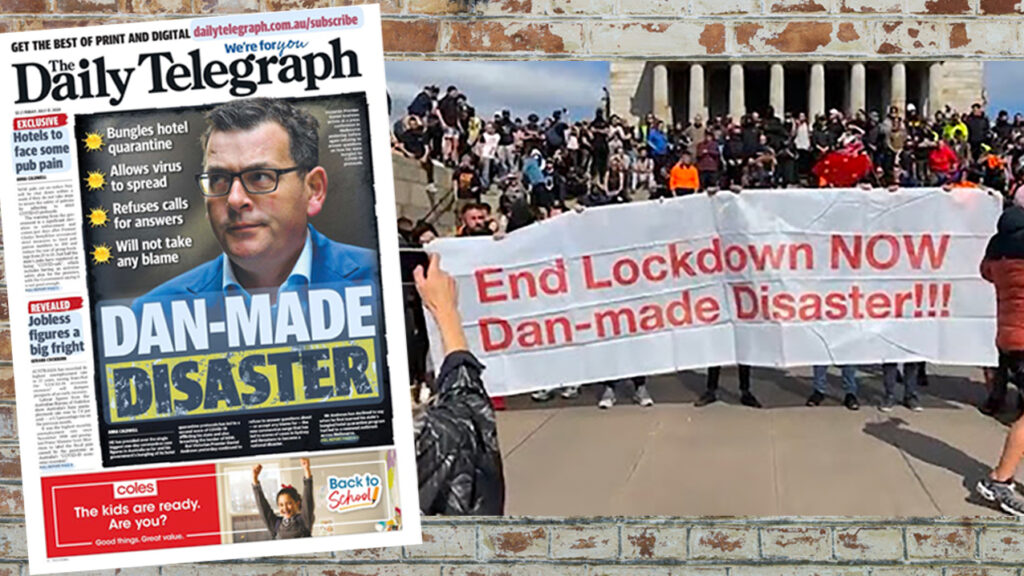 The morning after Nazis, anti-vaxxers and construction workers sang Daryl Braithwaite’s “Horses” on the Westgate Bridge – the city’s best view of the back of Scienceworks – Melbourne, not a place prone to earthquakes, was struck by a 5.9 magnitude earthquake.

Overwhelming events that happen in quick succession often feel like they’re linked. Human minds are attracted to patterns, always searching for meaning in chaos, order in disorder, grasping for comfort and control where there is none. This is why conspiracy theories are so attractive: the notion someone is behind *all this* is more comforting than the idea no one is. Cruel uncaring randomness is more existentially troubling.

The two events – the quake and the anti-vaxx Nazi singalong – were of course entirely unrelated. PROBABLY. Maybe. But try telling that to anyone that lives here, two-hundred-and-thirty-fuck-knows days into lockdown, and even longer into News Corporation’s irresponsible and cruel campaign to spit on the wellbeing of Victorians; part of its broader putsch against the Andrews Labor Government and its coronavirus public health measures.

Australia specialises in the dark art of having the wrong national conversation, or the right one stupidly, and here we are yet again. There is a line to be marked in the sand here. The ratio of real unionists to Nazis to anti-vaxxers amongst the rioters is a bit important. It’s helpful in working out how these things happen and what can be done about them. But in the grand scheme, quibbling over quotas seems a smaller concern than the fact fucking Nazis were singing Horses on the Westgate Bridge, stoking anti-vaccine sentiment in the middle of a pandemic, and parroting the language and talking points used relentlessly by Australia’s conservative media monolith: Rupert Murdoch’s News Corporation.

The agenda-setting and fearlessly stupid Murdochbloids, The Herald Sun, The Daily Telegraph, and The Courier Mail – interchangeable dribble with localised sports coverage – and Fox News sister network Sky News Australia, have been relentlessly encouraging of this sort of behaviour. Melbourne’s June lockdown, LD4.0, even began with Sky’s Peta Credlin fantasising about baseball-bat related violence against two fairly unrelated Labor politicians. “Trust me, there’s more than enough baseball bats in Victoria for both Albo and Andrews to cop a whack.”

On Wednesday afternoon, the morning’s earthquake now a distant memory from a bygone age, Betty’s Burgers on Chapel St having taken the brunt of it, the fascist and fascist-adjacent crowd set up for a smoko at the Shrine of Remembrance. At the solemn site for the city’s war dead, the hi-vis, hi-testosterone tantrum continued railing against vaccines, the mandating of them, an imaginary Communist dictatorship, CFMEU leadership, and the lofty goal of not spreading coronavirus around during a fucking lockdown. While there, the group brandished a banner featuring a word-for-word headline from The Daily Telegraph, The Herald Sun’s equally Nazi-encouraging interstate cousin.

As the rioter’s demands for vitamins and horse paste spread across social media networks like Telegram and Twitter, riot police circled, opening fire with nonlethal rounds on a core contingent that would not move on after being given an hour to do so. The Herald Sun, having spent the pandemic railing against an imaginary police state, must have been thrilled by the sight. (For the record, riot police are always at protests of any significance, but corporate media is far less troubled by this occurrence when they’re beating up environmentalists and anti-corporate demonstrators like they typically do.) 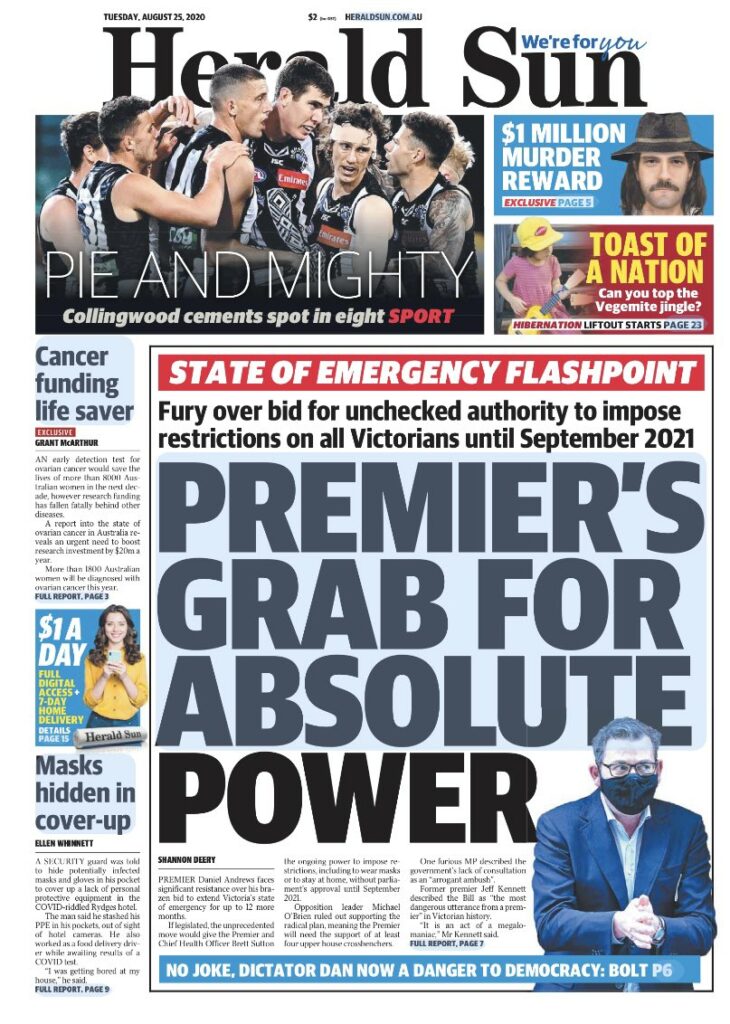 The grand narrative that the crowd sought to project at the Shrine is that they are brave freedom fighters like the hallowed, honoured dead. They are not: they are scared of needles and kick dogs. Some chant racist slogans like “no blacks” and throw up fascist salutes. 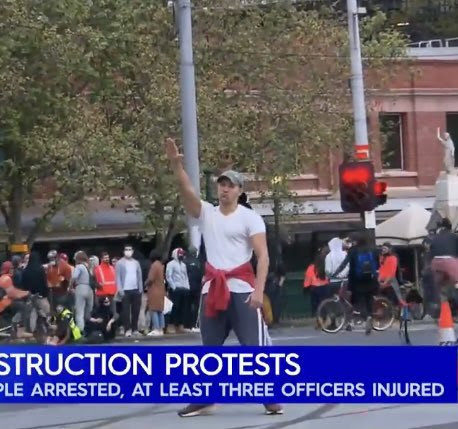 The week’s violence began with a siege of CFMEU headquarters, its windows and leader John Setka the target of much of the “freedumb” rage. One protester outside the building was filmed on Monday saying, “Now we are staring down the barrel of communism again. No fucking c— is going to put a vaccine inside me.”

Without putting too blunt a point on it, if this movement is being led by the CFMEU – which it’s not – protesting against Communism is a fairly new position for them. The fact the union disendorsed this action 19 days prior in a Facebook post on September 1 did not stop the Murdoch press and members of the Liberal Party, both state and Federal, seeking to depict the violence as CFMEU- and more broadly union-led.

Rita Pahani, slathering in the Herald Sun, on the notion anti-vaxxers and fascists might just be agitating generalised discontent into a violent uprising like ASIO warned they would, drooled: “That desperate narrative deserves to be treated with the disdain reserved for flat-earthers and Greens voters; the CFMEU don’t tolerate impostors and they hardly need any help in behaving thuggishly.” 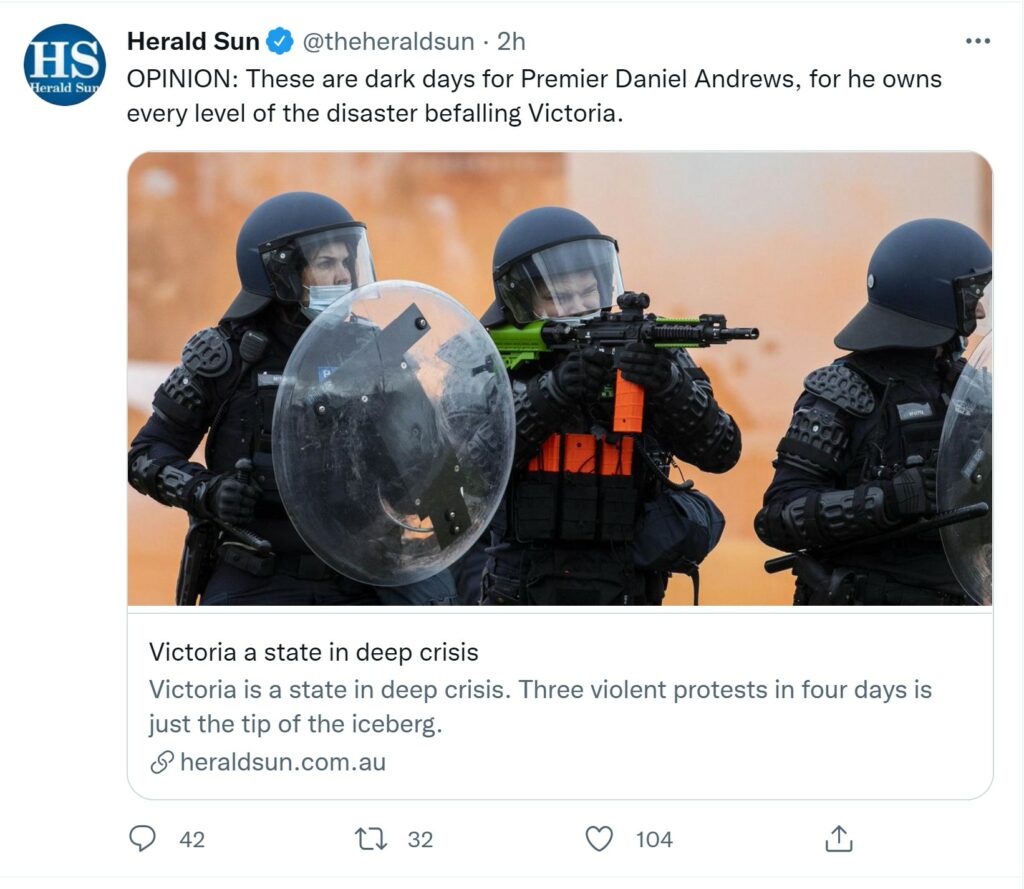 MP Fiona Martin, likewise, couldn’t resist an opportunity for some gibberish, which was then accentuated by Bernie Finn’s surprise shift to the ACAB and defund the police positions. Welcome to the resistance, Bernie. 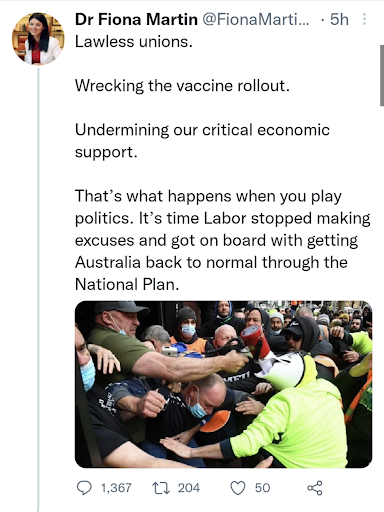 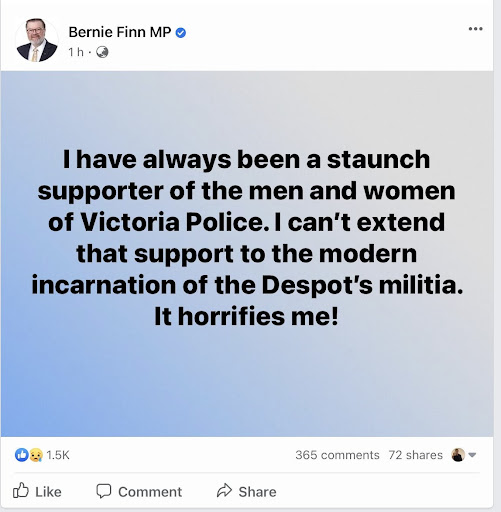 Matthew Canavan, a politician, an overwhelmingly besuited profession, the living embodiment of the answer to the question “can you buy and wear clothes from jobs you don’t have”, at least provided laughs by undermining his point with his own Twitter profile picture. 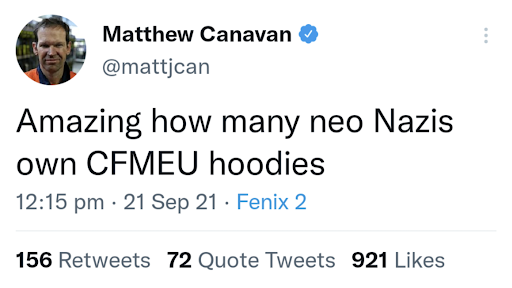 This demented tapestry highlights how conservative politicians and conservative media work in sync, details fading into the void, facts obliterated by ideology, the real point being the lasting residue left on battered brains fluctuating between chronic understimulation – an existential boredom anvil to the brain – and trying to parse the fact that now there are fucking Nazis and they sing Horses on the Westgate Bridge. Nazis are the worst and I fucking hate that song.

And there was an earthquake.

And the Grand Final is in Perth.

And the pubs are still closed.

In January ASIO warned of the dangers of far-right groups, saying they now accounted for 40% of the agency’s counter-terrorism work. The Federal Government responded to this by insisting ASIO dump the term “far-right” and instead use “ideologically motivated violent extremism”, modern conservatism’s bloodthirsty streak given a fresh coat of whitewash.

Sally McManus, Secretary of the Australian Council of Trade Unions, told The Shot far-right agitators are now deliberately targeting unions and union members in Australia. This is a strategic push, she says, that follows a global and historic pattern: fascists in any sort of ascendancy seek to destroy or co-opt unions, a traditional source of resistance.

“We have seen a concerted push by far-right groups across the country to target working people over public health restrictions,” McManus says. “This has occurred with aged care and health workers where they attempted and failed to organise a strike, with truck drivers and now with construction workers. They have been attempting to get traction whenever a Covid health measure is put in place: lockdowns, masks, border closures or vaccines… Their tactics are very similar to those used overseas and by Trumpists.”

“Fascists have always seen unions as their enemy,” McManus continued. “We are collectivists, democratic organisations that are about equality and solidarity. They are the opposite. They want to win working people to their cause and so need to try and delegitimise or win people away from union values. This is why they directly target us. They have been attacking union leaders for supporting public health measures, masquerading this as a fight for ‘freedom’. Really, the only freedom they would like is for white men who in their world would rule over everyone else because they are superior to everyone else.”

I did not seek out balancing comment from the Nazis because I don’t work for Channel 7 and they’re fucking Nazis.

In recruiting, fascists don’t start with the big stuff (“It’s the Jews!”, etc.). They put feelers out that prey on more generalised anxieties and dissatisfactions – and let’s be clear, there are a shitload of those flying around at the moment. This then begins the descent down the rabbit hole towards the increasingly extreme and violent parts of the ideology – which, for the record, is the worst one.

The Liberal Party’s ongoing racist stigmatisation of people from elsewhere has worked in lockstep with the Labor Party all but abandoning working class people with its wholesale embrace of neoliberalism, creating fertile soil for traditional supporters of unions and left-wing politics to be lured by the temptations of fascism, the blatherings of conservative media ever greasing the wheels.

While rioters demanded freedom from vaccines and Communism (?!?) on the streets of Melbourne, Scott Morrison was in the United States, where he met with NewsCorp chief executive Robert Thomson. We won’t know how that conversation played out until we start to see NewsCorp’s election coverage, but consider the ring kissed.

News Corporation is for all intents and purposes the same organisation here as in the US. It is owned by the same man, who, through Fox News, peddled anti-science, anti-democratic conspiratorial narratives into the brains of Americans, playing at least some role in the deadly anti-democratic riots on the Washington Capital in January of this year. The same exact shit is being peddled here, the results are starting to look more similar, and far too many journalists like to pretend that’s fine because one day we might need a job there. It’s not fine.

Nazis prey on the dissatisfied, the disenfranchised, and the angry. So does News Corporation.