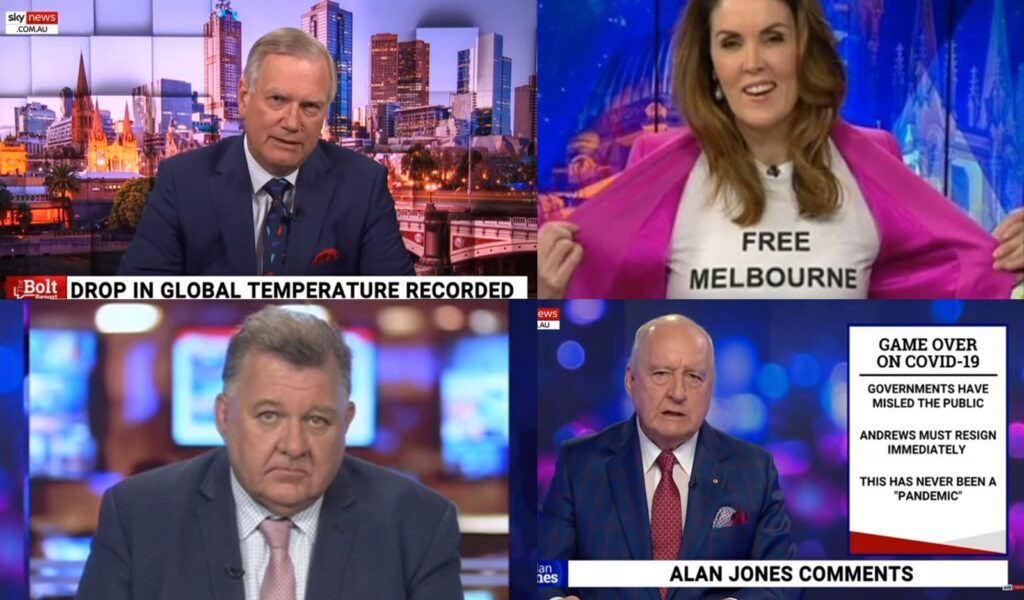 It is the stuff of Melbourne’s increasingly trippy nightmares: not only being the poor soul responsible for starting a new coronavirus cluster, but watching on as Daniel Andrews describes the dot points of your social life to an entire state riddled with anxiety and wine on live television; 6.5 million people holding lockdown PTSD at bay by pondering your fondness for Kmart and golf, or Dan Murphy’s and Off Ya Tree.

Our anxieties do not lack for source material. A rampant deadly disease. A disturbing contingent of people who doubt that disease’s rampant-ness, and even deadliness. Masks everywhere or, much worse, pointedly not. QR codes documenting our pub crawls and bakery visits. An on/off switch of curtailed liberties. These are the sort of things people with underground bunkers stocked with tinned meats and assault rifles whack off to.

And into this unnerving landscape steps my reckless, negligent employer, The Shot, insisting I submerge my brain into the noxious puddle that is Sky News Australia for an entire week of watching and writing and misery. It took me two just to work up the courage.

Let it be known that it is not only the likes of Amazon and George Calombaris that treat their employees with callous disregard. If anyone has legitimate dirt on this publication and its reprehensible owners, I’d love to write about them – preferably for a bigger, better masthead that doesn’t subject me to such unsafe working conditions.

Lurking on the fringes of Rupert Murdoch’s social engineering project, News Corp, Sky News Australia is more dangerous to our democracy and our social fabric than we like to admit.

It is a dirty bomb of white grievance, of conspiracy theory, of being wrong far too often for something pretending to be the “news” – almost entirely because of its extraordinary right-wing political bias. Bias with such overwhelming weight it crushes all basic journalistic standards and principles.

And yet it’s every – bloody – where. Sky’s media malpractice ripples across the darkest corners of the light web and the non-heroin-related parts of the dark web. It blares eternally for semi-captive business people from LCD screens in airport lounges and hotel lobbies and Parliament House, a cruel purgatory no electronic device deserves. And it is on free to air television – for fucking free – across regional Australia.

Sky News is the missing link between conservatism and conspiracism. The Cro-Magnon man linking respectable-appearing media with the unhinged QAnon uncles of the world. The Archaeopteryx in the evolutionary line between mainstream austerity and coronavirus being an authoritarian plot to control all freedom-loving people.

Where The Australian and even The Herald Sun have at least the thin veneer of deniability, of a toxin filter, Sky News is a pipeline of untreated neoliberal sewage pumped directly into the mouths of our most confused, our politicians, and those that fall into both camps. Craig Kelly is Sky News in corporeal form.

Just look at this workplace malpractice The Shot inflicted upon me. 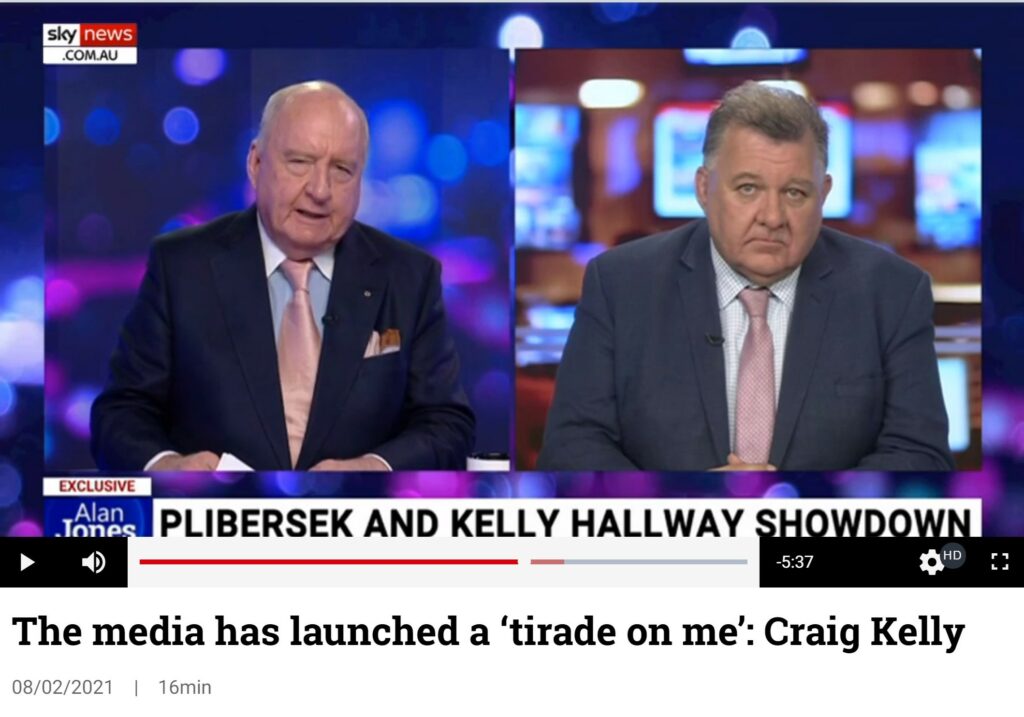 Don’t worry, this is only a screenshot. You’re not in danger of it accidentally playing.

Craig “Facebook” Kelly looks bullied here, Alan “shove a sock down [Jacinda Ardern’s] throat” Jones looks like a creep, because he is, and medical misinformation is spewed into brains under the guise of hearing “all the evidence”.

“Craig Kelly has been abused, defamed, vilified and threatened,” Jones said this week, Sky News having swooped in with a fresh platform after he was ditched by 2GB Radio for, among other things, a pattern of fantasising on air about assaulting women with more power than he has.

Undermining faith in the very things that will end this pandemic nightmare – like vaccines and restrictions – is an astonishingly fucked up and irresponsible thing to do. And if Craig Kelly is guilty of this, so too is Sky News.

Take, as another example of far too many, this historically bad call from Melbourne’s biggest champion of systemic racism not named Eddie McGuire. 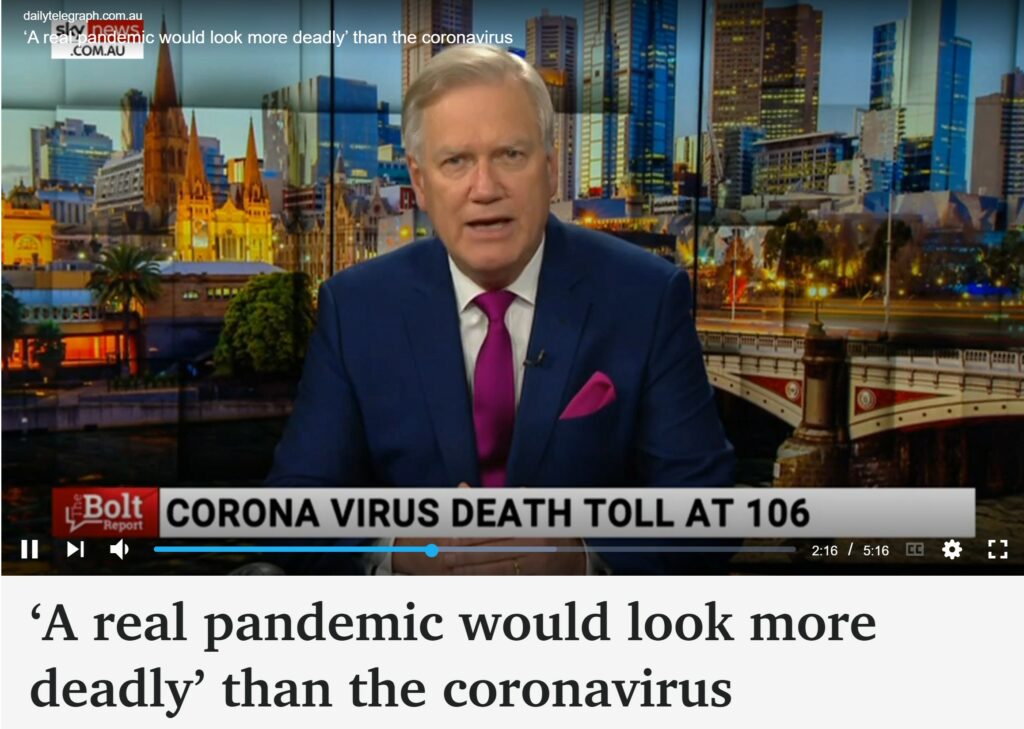 Look at that headline. In mid-January 2020, on Sky News, Andrew Bolt editorialised, stupidly: “There’s one more protection I think you should consider: how about building up some resistance – resistance to the emergence of panic. Panic about the fires, panic about global warming, panic about this coronavirus, panic about almost anything nowadays. Please, do you know how bad panic is for your health?”

More than 2.3 million coronavirus deaths later, Bolt’s advice to ignore coronavirus along with another bunch of very real existential threats like climate change and raging bushfires has aged as well as my baked lockdown pilates routine. 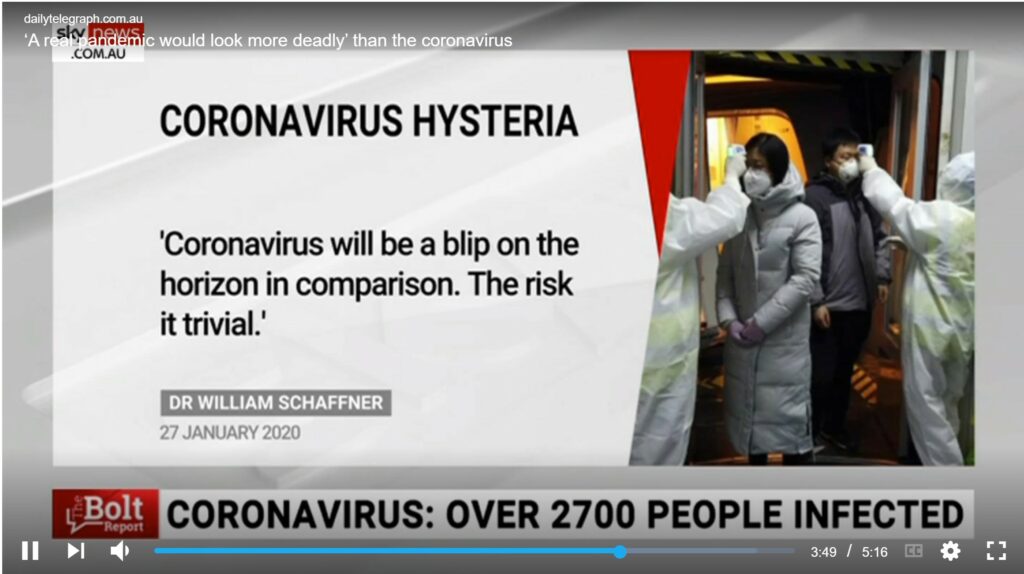 There’s always a quack doctor somewhere with a quote, undermining faith in the medical profession in the same way Sky’s Mouths of Sauron undermine faith in journalism. It must be asked: why are there no real consequences for a TV news network being this severely wrong about such important things? A smug tut-tutting from Media Watch doesn’t really cut it, does it?!? This is dangerous stuff.

And if you’re inclined to give Bolt a pass because he wanted to be quick out the gates with an early hot take, here’s Alan Jones in fucking September 2020. 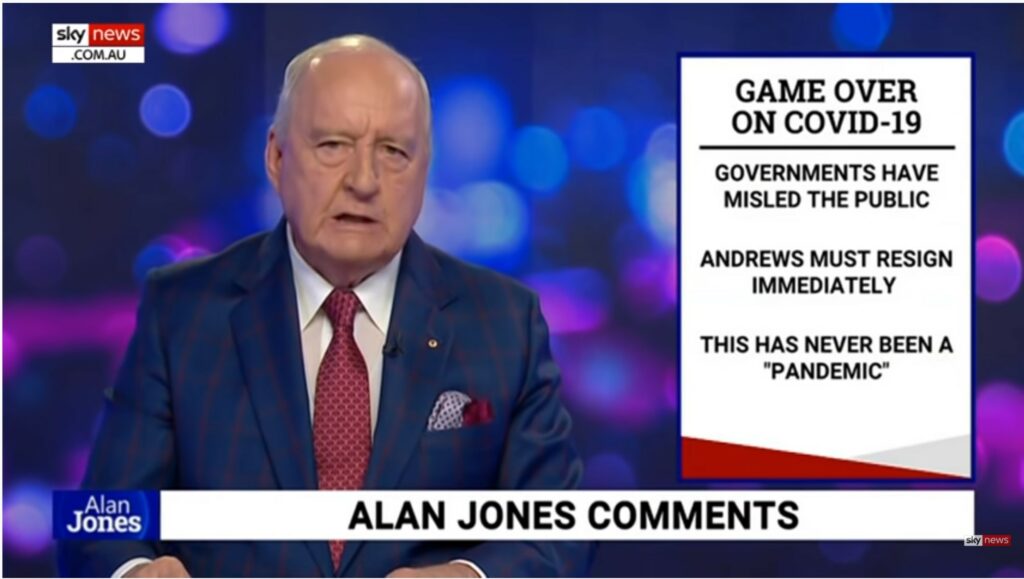 What the fuck is this shit, Charles?!?! I couldn’t avoid The Herald Sun, I live in Melbourne, but me needing to watch Sky News is on YOU. I resent this assignment.

This is definitely a pandemic.

Why does all this matter? Glad you asked. In July of 2020 polling company Ipsos found 30% of Americans didn’t believe the official coronavirus death toll. Alarmingly, but not at all surprisingly, that figure more than doubles to 62% amongst Fox News viewers. You could reasonably argue a “chicken and egg” defence – that Fox’s audience arrived at these views through other means and simply found sympathetic media to absorb – but I’d counter that that doesn’t matter when the eggs are this off and the chicken has botulism.

Whatever specific variety of brain worms you crave, Sky News Australia has them wriggling on a silver platter. There’s late night panels on US politics hosted by Rowan “too cooked for Insiders” Dean, James “pube quail” Morrow and Rita “8pm curfew reminds me of the Ayatollah’s iron fist” Panahi. 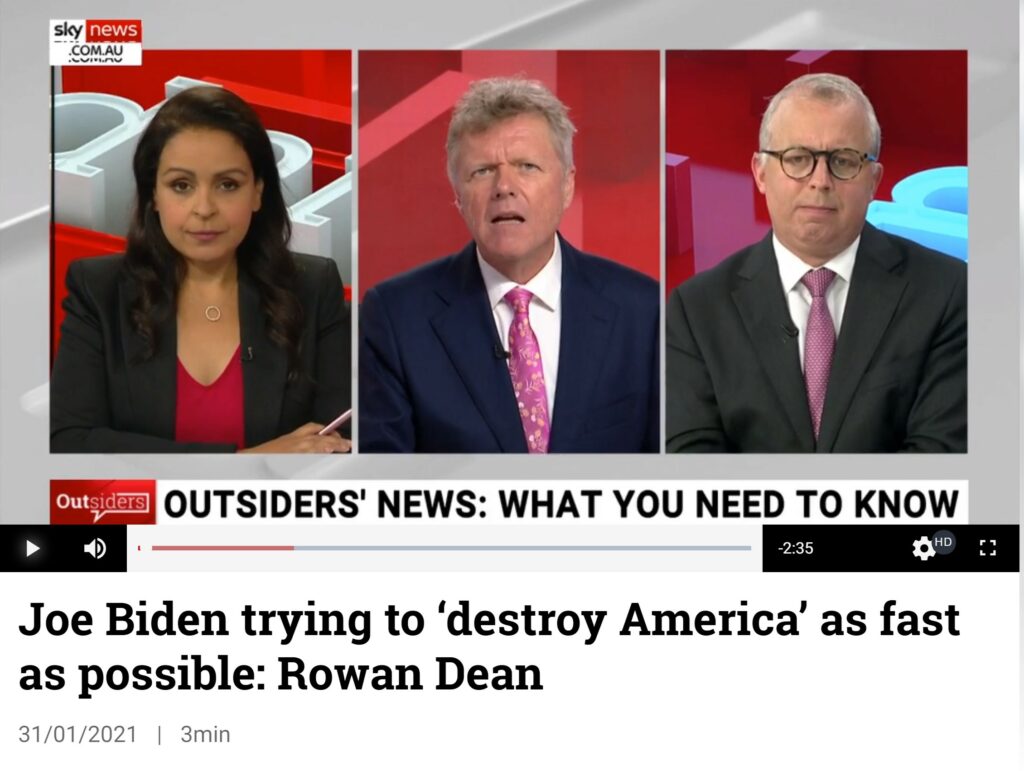 I’d argue “Rowan Dean” being a fragment of any headline is ill advised, but “Joe Biden trying to ‘destroy America’ as fast as possible: Rowan Dean” is just an all-time shit-stain on journalism.

There’s even instances when Sky’s “editorial” approach to local issues (refresher: giving unhinged people a platform for their conniptions) is meshed into the broader, ideological assault on matters of global significance. It’s a heady stew of fucked up. 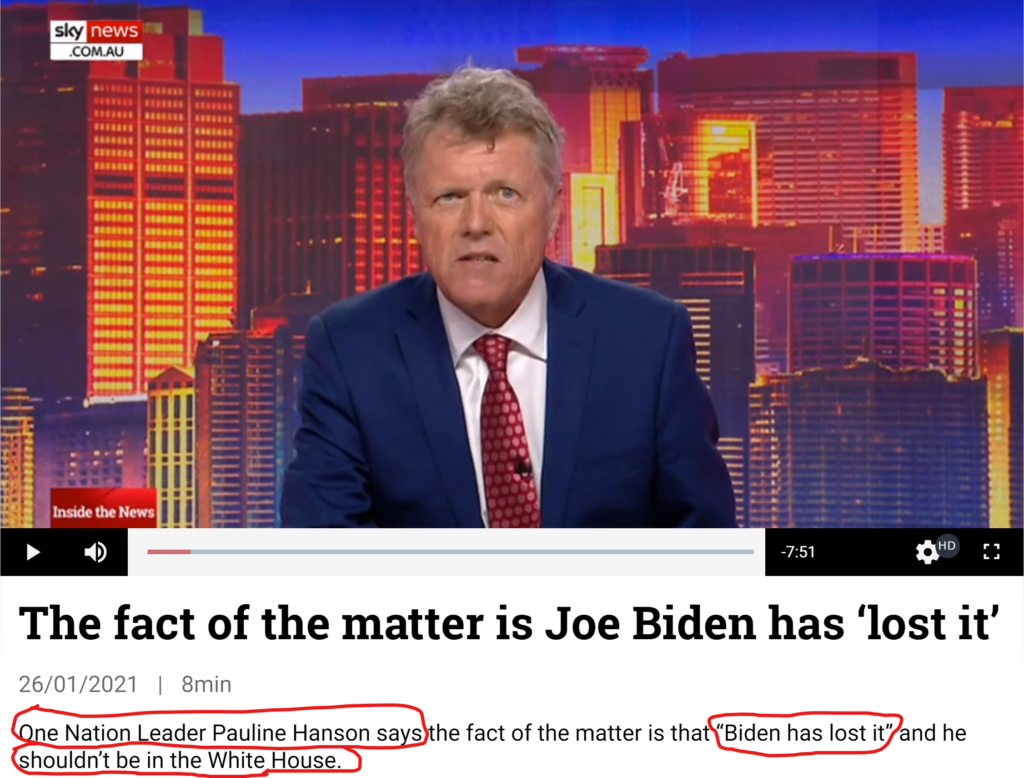 No one should need to say this, but none of this is newsworthy. Pauline Hanson says lots of stupid things. Most of the time we don’t need to know about them. Even more so on matters of US politics, to which she has bugger all connection. Doubly so again at a time when tens of millions of Americans think democracy has been overthrown because the guy who tried to overthrow it didn’t finish the job.

And then, of course, who could forget…. Sky News’ late but still overwhelming injection into NewsCorp’s broader campaign against Melbourne’s lockdown actually working. Arriving in a whirlwind of Peta Credlin’s extraordinary hair, Sky stood tall as liberator of the Victorian proles, heroic cross-examiner of Dictator Augusto Danochet (I can’t keep this gag going much longer, I am running out of dictators). 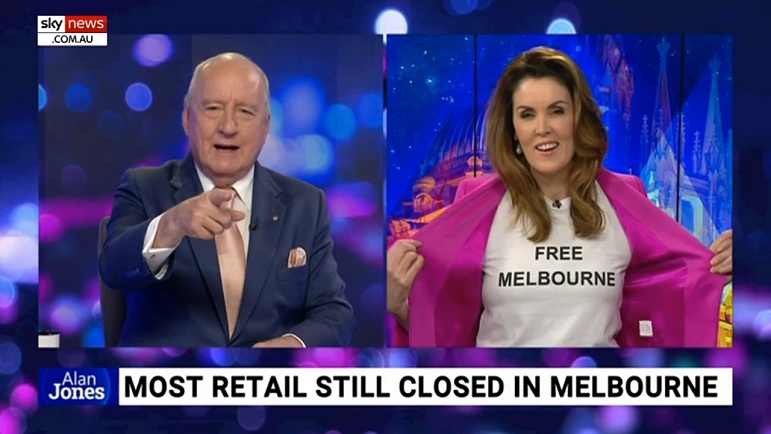 Sky News’ most painful contribution to Melbourne lockdown life was wrestling our horrid daily press conferences even further away from the information Melburninans needed and wanted. We had lots of questions like: IS THIS PLAN WORKING?!?! What can we do to help with that? Can we see our friends again soon please, this is a bit fucked? What are the specific legalities around being outside this week? And so on.

Sky News is not our ABC competitor. It is our Fox News. And its feedback loop of dumb ideas and bad information seeded into the public space stretches the right nut of our Overton window’s beaten sack so hard the left one disappears back inside.

Humanity is currently debating whether traditional media has led us to our conspiracy age and caused the overwhelming proliferation of unhinged people and ideas, or whether it’s the murkiest swamps of the social media sphere that has flipped us off into Biff Tannen’s darker timeline. With Sky News that distinction is irrelevant. It is both traditional media and Australia’s largest, most dangerous, unhinged YouTube influencer.

Dismissing the danger Sky News poses to Australia – to democracy – based on its piddly Foxtel audience and those captive transient business suits downplays the extent of its real reach, and its real capacity to melt brains. 1.21 million subscribers is more than enough of a base to tentacle this content out into the ether. It is deliberately designed to outrage and inflame, and it does, all the way into the viral stratosphere.

The people that were too racist for American TV, horrific alt-right wet dreams like Lauren Southern, are welcomed with open arms by Sky News Australia. And as this unhinged, let’s call it “content”, ripples across the web, it is picked up and treated as a legitimate source by sentient pieces of tin-foil like Alex Jones of InfoWars infamy.

In this way Sky News helps create an environment where even more deranged ideas than those espoused on air feel plausible. With that commie dictator in Victoria maybe I’d better look into the real truth behind this virus, and so on, down the reverse-scientific-method rabbit hole of the conspiracy theorist.

Start with an answer fairly predetermined and then work backwards for evidence that suits your preferred conclusion, whatever that may be: Bush did 9/11, climate change isn’t real, Hilary Clinton is running a paedophile tunnel network between the monolithic white marble government buildings and Washington DC’s low-rent pizza joints.

For the people that get their news and opinion commentary, a distinction so archaic we should put it out of its misery, from Sky News, this is what they find. And Sky News knows this. It is built into their business model. Just as it is with Fox News. Plausible deniability in the daytime, unhinged neoliberal brainwashing after dark.

I resented this assignment so much, not only because I had to watch more Sky News than I felt my mushy brain could handle, but also because it’s clearly a thinly veiled piece of advertorial for The Shot’s new “Sky News Sucks” stickers, which, while being demonstrably true and an important message to get out there, is still insulting to my currently inflated ego. I’ll bet NewsCorp treats Andrew Bolt better than this.

Australians readily accept that Fox News has melted half a generation of American minds, and that Rupert Murdoch’s quasi-newspapers have driven the UK into its disease-riddled Brexity future of cold wars over European fish stocks and not feeding lunches to school children. Don’t fear the same media organisation trying the same stuff here; recognise it is well and truly underway.

Charles, we need to talk about a pay rise. Fuck you man, that was a horrific experience.

The Nationals are scum

We have two legal systems in Australia, and unless you’re powerful or obscenely rich you get the bad one

Stop asking the Morrison Government to give a fuck. They don’t.

Australia’s welfare system is ridiculously cruel, except to decrepit anuses like Gerry Harvey
Help us bring you the good news
Our writers can't be paid in exposure, but they sure can die from it. So if you like the stories on The Shot and would like to become a supporter, we'd welcome the money. Just $1 a month is enough for us to keep publishing stories.
Support The Shot
Already a supporter? Click here to never see this again!
Do NOT follow this link or you will be banned from the site!