General News
This International Day of Disabled Persons, Australia needs to shut the hell up
December 2, 2021 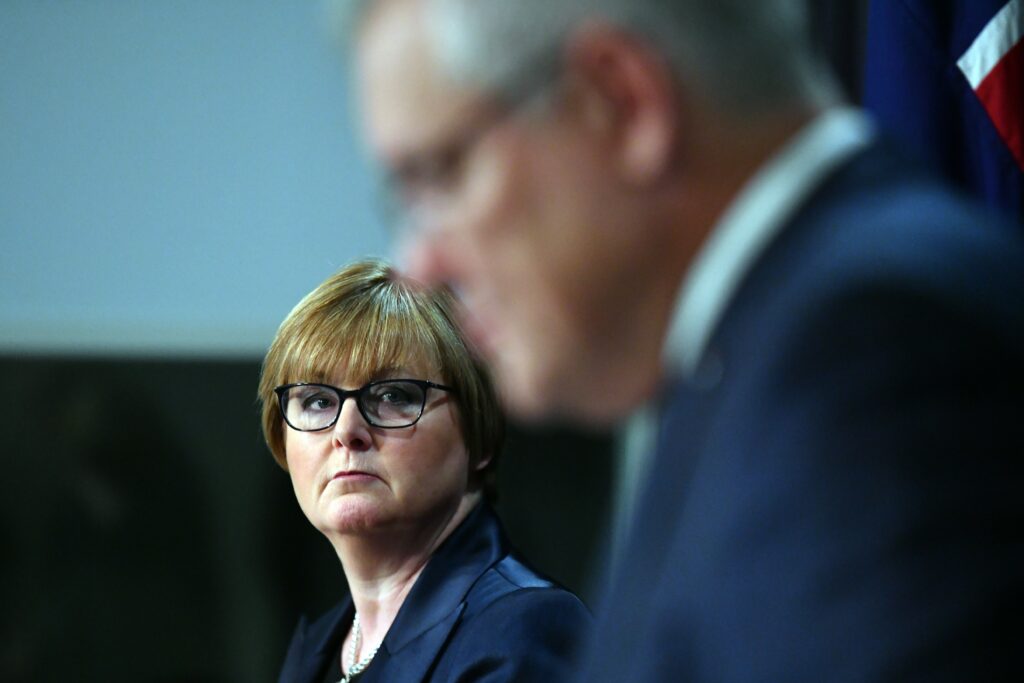 Tomorrow is International Day of Disabled Persons, and as a disabled person I want to take this opportunity to ask everyone who isn’t disabled to please shut the fuck up.

Normally, the day gets less coverage than much more important days, like Ice Cream Day or Talk Like a Pirate Day. And after the shit-stain this year has been for disabled people, I don’t think Australia deserves to pat itself on the back.

Before I continue, I do want to warn any HR “diversity training” people who aren’t disabled that I will be using the word “disabled” throughout the article. I know the word offends some of you and many other performative people who don’t have disabilities, but it is the term, so if you are offended, that’s entirely your problem.

Last week, the minister in charge of the National Disability Insurance Scheme (NDIS), Linda Reynolds, told The Australian she’s worried the NDIS is becoming a “welfare system for life” – a statement so worrying even the heartless husks at NewsCorp didn’t try spin it in a positive light.

But there’s a lot more to unpack about the situation than people realise.

Reynolds has been saying similar things all year. In May she said she was concerned some people who grant NDIS funding were engaging in the disgusting act of showing empathy to disabled people. The horror! Imagine an NDIS that involved empathy? I can’t. With the insane hoops disabled people constantly have to jump through to get any funding, I literally can not.

In August, Reynolds spoke out against elderly people with disabilities, minors with autism, and obese people receiving funding. Two of the mentioned groups have disabilities, and when it comes to obese people, the source of her claim was never revealed beyond that she “thinks” it could be happening. The media ran it as if it was a proven widespread issue. This creates the perception that somehow billions of dollars are getting leached inappropriately by undeserving people from a system that, in reality, constantly turns away people with diagnosed disabilities and great need.

There’s one other glaring issue with Reynolds’ “welfare for life” comment. It literally is a “welfare for life” system. People with permanent disabilities need welfare for life, that’s how it works. To imply we shouldn’t support these people while they continue to breathe and be disabled is cruel and dehumanising.

Sadly, a lot of the discussion was around the “welfare” part, easily the least offensive part of the sentence. Even progressive activist groups like MFWitches and Sleeping Giants were more focused on the welfare part than the for life part. It is a welfare system, there is nothing wrong with welfare. Some people need welfare, some people need welfare for life. What is wrong is the fucking ableism!

Sadly, this government is so fucked up I can’t cover all of what happened this year here.

But one thing worth mentioning is that it has been getting support through this process from the federal Labor Party. For all the talk Labor does, calling our PM and his party a bunch of “liars who are all talk”, from my perspective so is Labor. In June, the government proposed changes to private insurance laws with a new definition of “disabled” which meant for private insurance companies to recognise someone as disabled the person must be on the NDIS. A useless, discriminatory and completely fucked up change. The Greens put forward an amendment to stop the definition change but Labor shut the amendment down.

I don’t care if this is some 4D chess for the election, I don’t care if Bill Shorten writes a strongly worded tweet. I care about what the law is. Thus far, on this issue Albanese’s Labor is just as much a lying “all talk” party as the Liberal party.

If anything so far has been new to you, I don’t blame you. All of this is part of a bigger problem; the lack of representation of disabled voices in Australian society, including Australian media.

When Dylan Alcott won Victorian of the Year, I was surprised. I think he does great work and is very deserving. What surprised me was that the media praised Alcott for using his platform to raise important issues, but thanks to the media, the conversations Alcott tried to start weren’t actually had.

To paint a picture of just how bad the issue is, personally, I never planned to become a writer for The Shot. I am a satire writer for the Chaser which is way easier and less scary. I started writing for the Shot because I was seeing disability issues going uncovered or covered in ableist ways.

One of my first articles for The Shot was about how the witnesses in the Royal Commission into the Abuse of Disabled People were almost completely non-disabled people.

If you’re wondering the impact that has on the quality of reporting, let’s use the Paralympics as an example.

This coverage talks down to disabled people and glosses over the real issue in order to make non-disabled people feel good watching it. This time out, the Paralympics ran an international campaign specifically against coverage that involved talking about how someone became disabled and against framing the athletes as some tragic story of bravery overcoming. The idea was to cover the Paralympics the way non-disabled sport is covered.

It was meant as a protest of the bigger issue regarding painting disabled people as “brave” and “resilient”. Bravery requires making a choice, choosing the harder option most people wouldn’t, and we don’t choose our disability. So if we are choosing to be alive with a disability, and that choice is one most people wouldn’t make, what you’re telling us is that if you were us you would rather be dead.

Across the board, Aussie media didn’t even try doing that. If you paid any attention to the Paralympics this shit was endless. Here’s a screenshot from a Guardian article from before the games had even started!

They really were like “fuck the disabled community, what do they know?” and raced straight to the ableism.

But hey, there was at least one discussion regarding the Paralympics that kicked off, when Nick Morris revealed to the ABC that Paralympic athletes weren’t paid for a medal like Olympic athletes were. Blatant and gross ableism, now how do you think the ABC would frame such a scoop? Why does that need to be a question? Just say the inequality is bad. That’s not a story where there are two sides to the debate.

Now there is one last thing that comes with lack of representation in the discussions surrounding disability – one thing that can sting just as hard as the rest, if not harder. One thing that tends to go the most under the radar with Australia as a whole. How prevalent ableism is everywhere in the media. It is blatant, and I mean very blatant. It’s not like in 2021 a major news outlet would repeatedly use an ableist slur as clickbait, right? Right, Crikey? 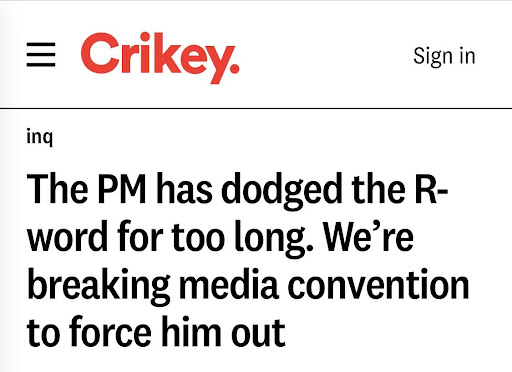 Now, in fairness this is bait and switch clickbait, but they know what they are doing. Crikey has used that clickbait style multiple times this year, pretty much any time they can connect Morrison to a word beginning with “R”. Only with words beginning with “R”. In the 7 months they have patted themselves on the back for the one time calling the PM a liar, like everyone else has been doing for years, they didn’t say he had been dodging the “L-word” now did they?

Look, I hate Morrison as much as the next Shot writer. But I also can’t stand shit like that. It is just as grubby and disgusting to me. But, sadly, a lot of Australians don’t seem to care. This is why it is so important to hear disabled voices!

This is why again I urge you to please just shut the fuck up tomorrow. We don’t need you to lead the conversation for us: we know what it is like when you lead these discussions. It just leads to fuck all getting done.

Every year the questions that arise on December 3 are patronising and steeped in unintentional ableism. I don’t want another 2021. I’m not sure I could stomach it. So just shut the fuck up and let us control the conversation for once.

Right-wing politics is cancerous to democracy, society, and human life 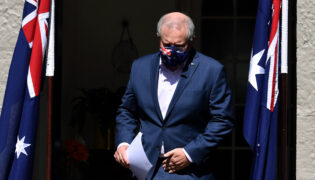 For are we one? 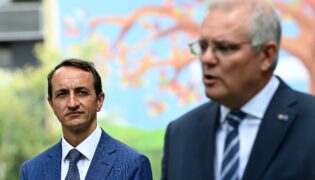 Liberal Party members are so embarrassed by their votes they want to shut down a website that tracks how they vote
Help us bring you the good news
Our writers can't be paid in exposure, but they sure can die from it. So if you like the stories on The Shot and would like to become a supporter, we'd welcome the money. Just $1 a month is enough for us to keep publishing stories.
Support The Shot
Already a supporter? Click here to never see this again!
Do NOT follow this link or you will be banned from the site!